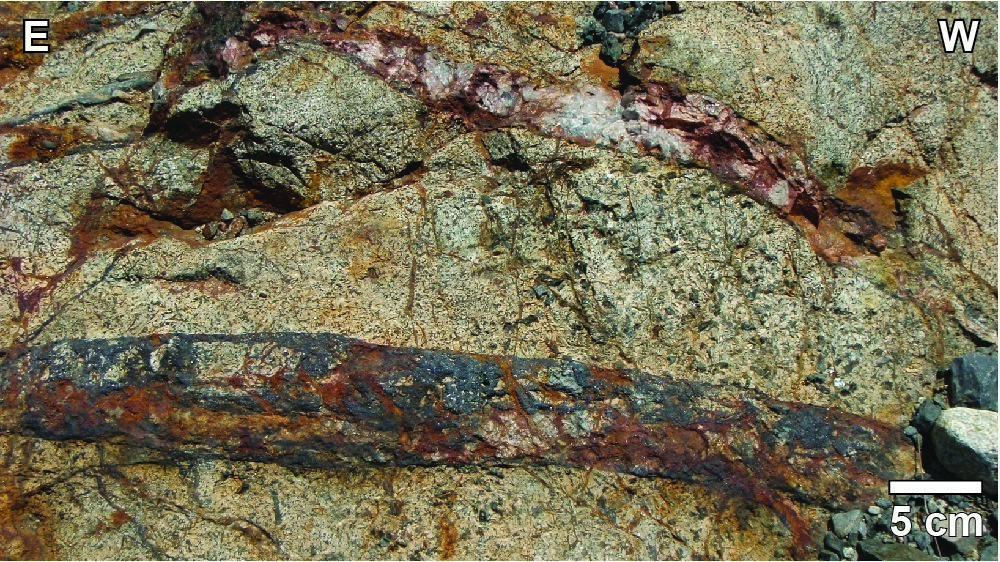 The Ventures Sill stratigraphy was established during underground work on the Opémiska property (Springer and Perry mines) and in the Chapais area (McMillan, 1972; Watkins and Riverin, 1982). Stratigraphic drillings east of Barlow Lake (Poitras, 1984) and the roadway section along Cummings Lake (Bédard et al., 2009) characterize the petrography and geochemistry of the Ventures Sill. 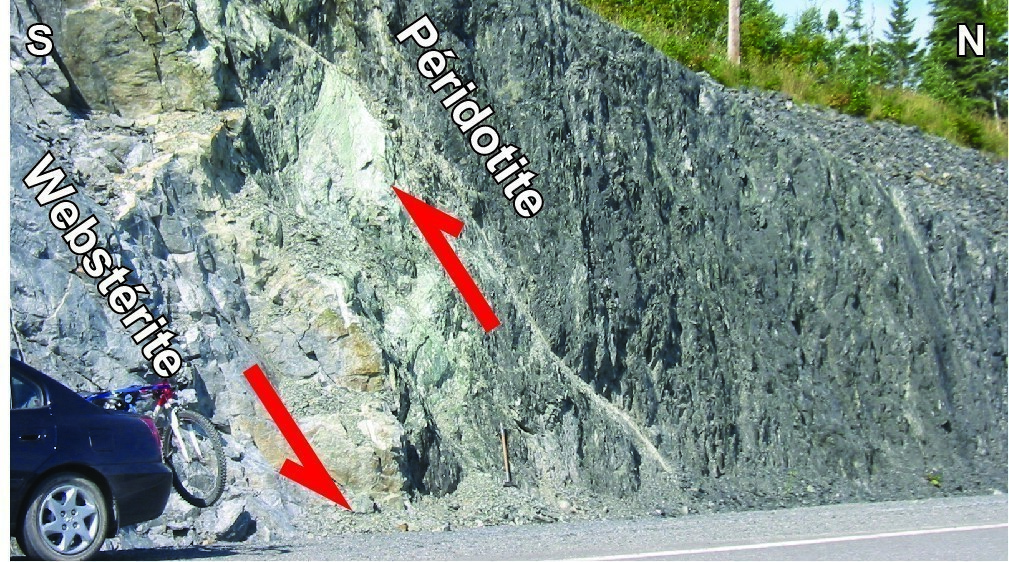 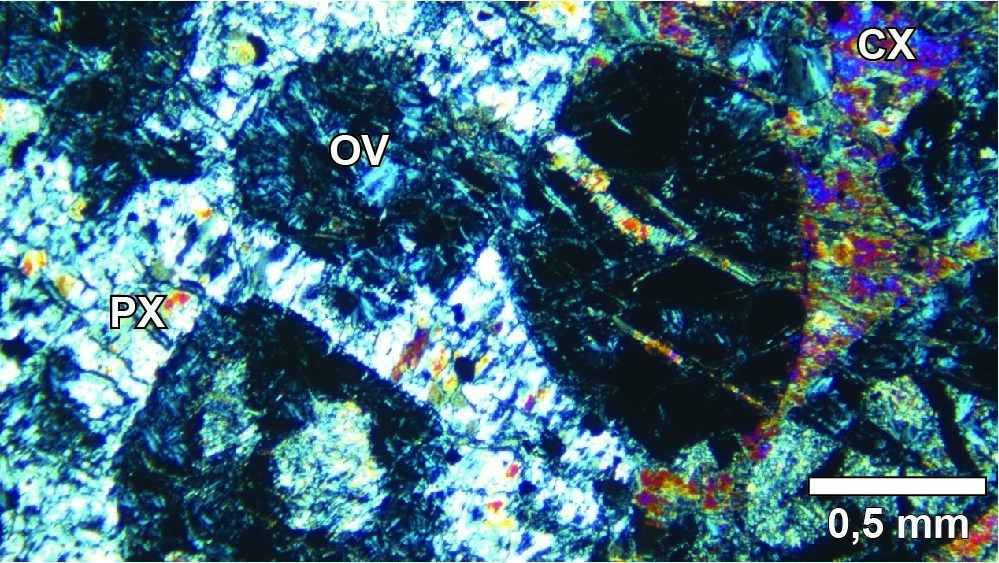 Unit nAven1 is composed of basal websterite with orthopyroxene pseudomorphs (±40%, <2 mm) replaced by bastite and clinopyroxene pseudomorphs (±45%) replaced by a talc-chlorite assemblage. The rock becomes richer in olivine towards the top and includes some poekilitic crystals of orthopyroxene, clinopyroxene or hornblende. Intercumulate minerals are replaced by greenschist facies minerals (Bédard et al., 2009). Serpentine peridotite is fine to medium grained and includes ovoid olivine pseudomorphs (85%, 0.1-0.4 mm) and some larger phenocrystals. Euhedral clinopyroxene is present in smaller amounts (15%, 2-6 mm). Greenish to grey clinopyroxenite is medium grained (≤1 mm) and has an equigranular texture obliterated by alteration (Bédard et al., 2009). Unit nAven1 corresponds to the Lower Green Pyroxenite, Black Pyroxenite and Upper Green Pyroxenite subunits of Watkins and Riverin (1982) on the Opémiska property, in the Chapais area. 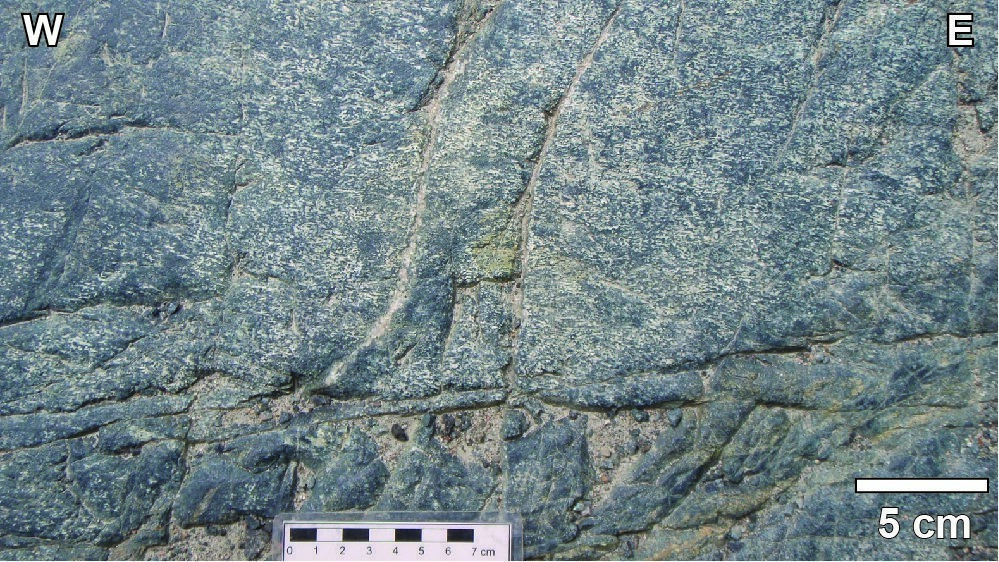 Unit nAven2 consists of foliated gabbro and ophitic gabbro (Leclerc et al., 2017). According to Watkins and Riverin (1982, pp. 433-434), the foliated gabbro thickness is approximately 150 m. The latter is the base and is commonly composed of a 15 to 30 cm-thick layer of clinopyroxene, including 30 to 40% magnetite. The typical structure is rhythmic bedding caused by segregation of the main magmatic minerals including andesine, clinopyroxene and titanomagnetite. The rock is invariably characterized by strong foliation due to the alignment of mafic minerals and the feldspars’ long axis. Contact with the overlying unit is sharp and marked by an abrupt change in texture and size. As for the Ventures’ ophitic gabbro unit, it forms the upper portion of the sill over a thickness of 350 m. Its mineralogy is similar to that of foliated gabbro and includes up to 5% free quartz grains. The rock has a coarse and typical ophitic crystalline texture. 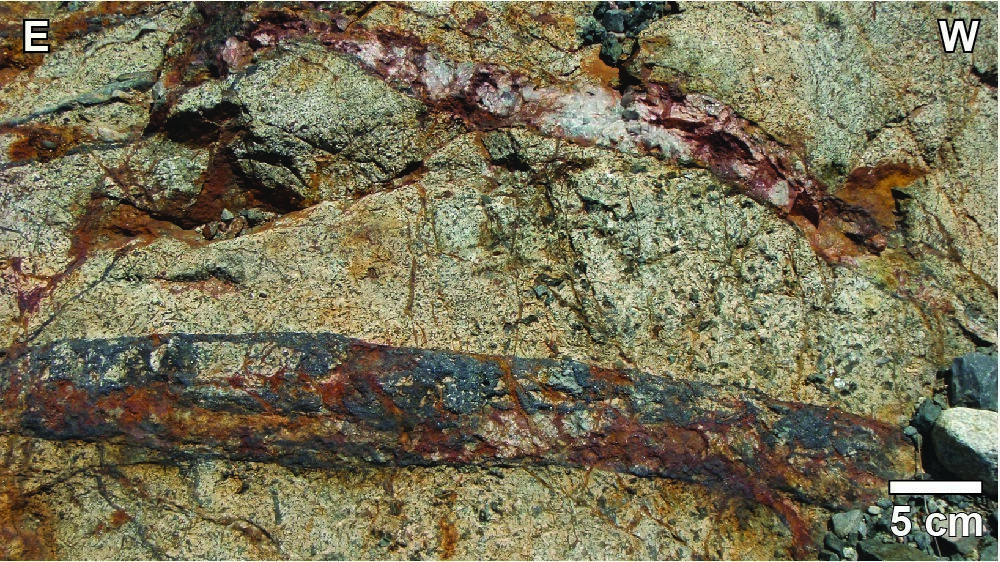 According to Watkins and Riverin (1982, p. 434), a narrow 6 m wide zone containing pyrite and chalcopyrite appears locally on the top of the Ventures gabbro, accompanied by zones where gabbro develops a granophyric texture. According to Duquette (1982, p. 27), granophyric gabbro “consists, for the most part, of an intergrowth of quartz and albite and some albite phenocrystals with myrmekitic margins up to 6 mm in size. It also contains some actinolite needles and rare sheets of zircon-bearing chlorite. Downward, that is, as you approach gabbro, the rock becomes increasingly coarser-grained and richer in mafic minerals and eventually becomes a normal Ventures gabbro.”

Rocks of the Ventures Sill appear between those of the Roberge and Bourbeau sills. They cut volcanic rocks of the Roy Group’s second volcano-sedimentary cycle (Duquette, 1970, 1982).