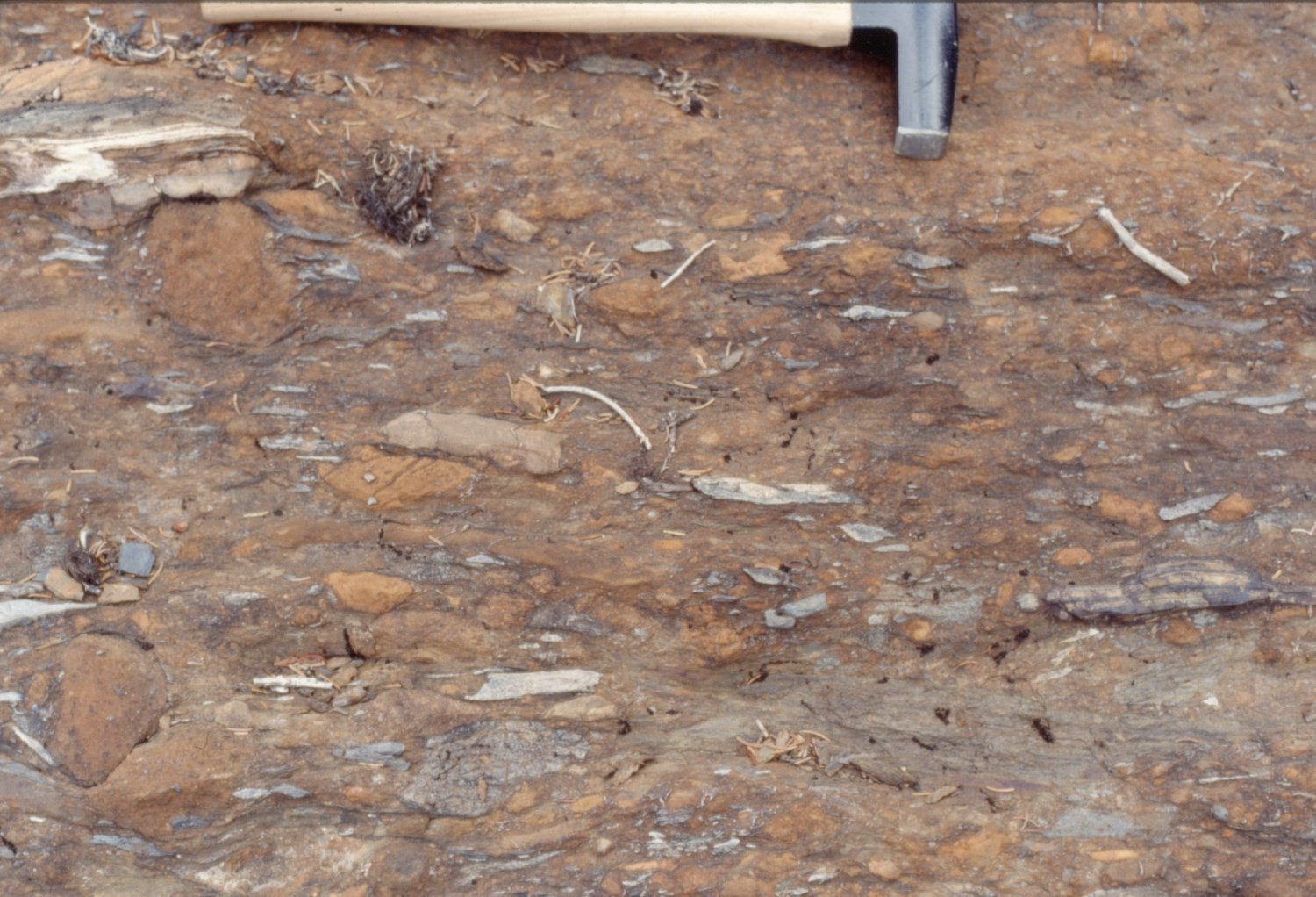 Fahrig (1965) and Dressler (1974, 1979) described a sequence of felsic volcanic and sedimentary rocks west of Le Moyne Lake in the Douay Lake area. During regional mapping, Dressler (1979) assigned these rocks to the Murdoch Formation. Rocks of the sequence were subsequently described by Kheang (1984), who assessed the metallogenic significance of rust zones in the sequence. They were also described in a study of carbonatite of the Le Moyne Carbonatite Complex (Birkett and Clark, 1991; Clark, unpublished field data). Clark and Wares (2004) have given this sequence the formal name « Douay Formation ».

This unit consists of rhyodacite and minor amounts of felsic lapilli tuff (Dressler, 1979; Kheang, 1984). It outcrops over a distance of ~12 km along a NW-SE axis to the west and south of Douay Lake (sheets 24F02, 24C15 and 24C16). These volcanic rocks outcrop in an area consisting largely of dolomite, with which they are in stratigraphic contact. Rhyodacite is dark grey, grey or pinkish, fine-grained and massive (Dressler, 1979; Kheang, 1984). It is porphyritic in places and contains pinkish feldspar phenocrysts up to 1 by 3 mm (Dressler, 1979). Rhyodacite displays slight rusty-brown alteration associated with pyrite in cracks and vesicles. The rock is also cut by numerous quartz and quartz-carbonate veinlets which are generally barren (Kheang, 1984). In thin sections, the rock is composed of plagioclase, microcline, quartz, apatite, opaque minerals and minor amounts of calcite. The matrix is formed of plagioclase and microcline as thin, hypidiomorphic rods having a fluid texture. The phenocrysts consist mainly of perthitic microcline. Some smaller plagioclase phenocrysts are also present. The matrix also contains dark greenish brown to brown biotite (0.3-1.2%), very fine-grained and anhedral opaque minerals (0.5-2.5%, locally up to 20%) (Dressler, 1979). According to Dressler (1979), rhyodacite is macroscopically almost identical to potassium-supersaturated dacitic volcanic rocks (pPda2). Chemically, rhyodacite is distinguished by slightly higher contents of SiO2, total Fe and Na2O (4.56 and 6.40%), but mainly by lower K2O contents (2.95 and 4.67%) (Dressler, 1979).

Lapilli tuff is grey, fine-grained and slightly foliated. It is composed of fragments of grey or pinkish-grey, aphanitic rhyodacite up to a few millimetres in size. Larger fragments (5 by 25 mm) are locally observed (Dressler, 1979). In thin sections, the rock is mainly composed of muscovite, quartz, plagioclase and K-feldspar. The phenocrysts consist of perthitic microcline and plagioclase. Ilmenite crystals have been completely replaced by leucoxene. Allanite, carbonate and apatite are accessory minerals (Dressler, 1979). Tuff is locally enriched in magnetite (up to 10%) and sulphides (Dressler, 1979; Clark, unpublished data). According to Kheang (1984), magnetite tuff is fine-grained and regularly laminated or bedded and contains felsic fragments up to 30 mm long and a few millimetres wide. Alteration and the presence of sulphides in rhyodacite, and magnetite in lapilli tuff, indicate possible hydrothermal activity in areas of high permeability in the volcanic pile (Kheang, 1984).

Potassium-supersaturated volcanic rocks, named potash-rich volcanic rocks by Dessler (1979), are found SE of Douay Lake, where they outcrop in a hectometric area of poorly defined shape and size (sheet 24C16; Dressler, 1979). At this location, close to carbonatite of the Le Moyne Carbonatite Complex, these rocks are spatially associated with mafic pyroclastic rocks of the Murdoch Formation, in which they were originally included by Dressler (1979). Potassium-supersaturated volcanic rocks are pinkish, porphyritic and composed mainly of small fluid-textured microcline crystals, a few microcline phenocrysts and minor amounts of carbonate; they are thus almost monomineralic volcanic rocks (Dressler, 1979). These volcanic rocks differ chemically from rhyodacite (pPda1) by lower contents of SiO2, total Fe and Na2O (0.4 and 0.88%), but especially by high K2O contents (>13%) (Dressler, 1979).

Unit pPda3 consists of dolomite that is commonly grey and has a light grey (pure dolomite) to buff or yellowish (impure dolomite) alteration patina. Beds are laminated to massive and 1 to 30 cm thick (Clark, unpublished field data). Locally, sedimentary structures such as beach ripples and intraclasts produced by syn-sedimentary slip are observed in dolomite. Rare wavy laminations suggest the presence of stromatolites. Pinkish or buff dolomites having a brown altered patina are rarely seen. The unit includes decimetric to decametric interstratifications of several lithofacies: sericite schist (1-20 cm beds), basalt (beds up to 5 m), chloritic schist (mafic tuff in beds up to 1 m) and pelitic schist (metric beds). Dolomite is commonly cut by millimetre to centimetre-thick quartz veins and lenses.

Unit pAda4 consists of aphyric basalt and plagioclase porphyritic basalt (Clark, unpublished field data). The two lithofacies are typically interstratified in metre-thick layers and have a greenish beige patina. Porphyritic basalt is foliated and contains plagioclase crystals, of variable abundance, being 2 to 5 mm long, locally up to 1.5 cm. Basalt rarely contains pyroxene phenocrysts. Plagioclase phenocrysts are generally aligned parallel with geological contacts. Contacts between the two lithofacies are either transitional (over a few decimetres) or abrupt. Near fault zones, basalt is transformed into chlorite schist. A few thin sills of subophitic to ophitic, medium grained gabbro are associated with these basalts; they are probably synchronous with them. Near faults, gabbro is altered and locally cut by a dense network of centimetric calcite ± actinolite veins.

Unit pPda5 consists of mudstone, slate and siltstone (Dressler, 1979; Clark, unpublished field data). It outcrops in two areas west of Le Moyne Lake over a distance of 25 km (sheets 24C16, 24F01 and 24F02). These rocks are dark grey to black (presence of graphite) and locally contain pyrite disseminated or as laminae. 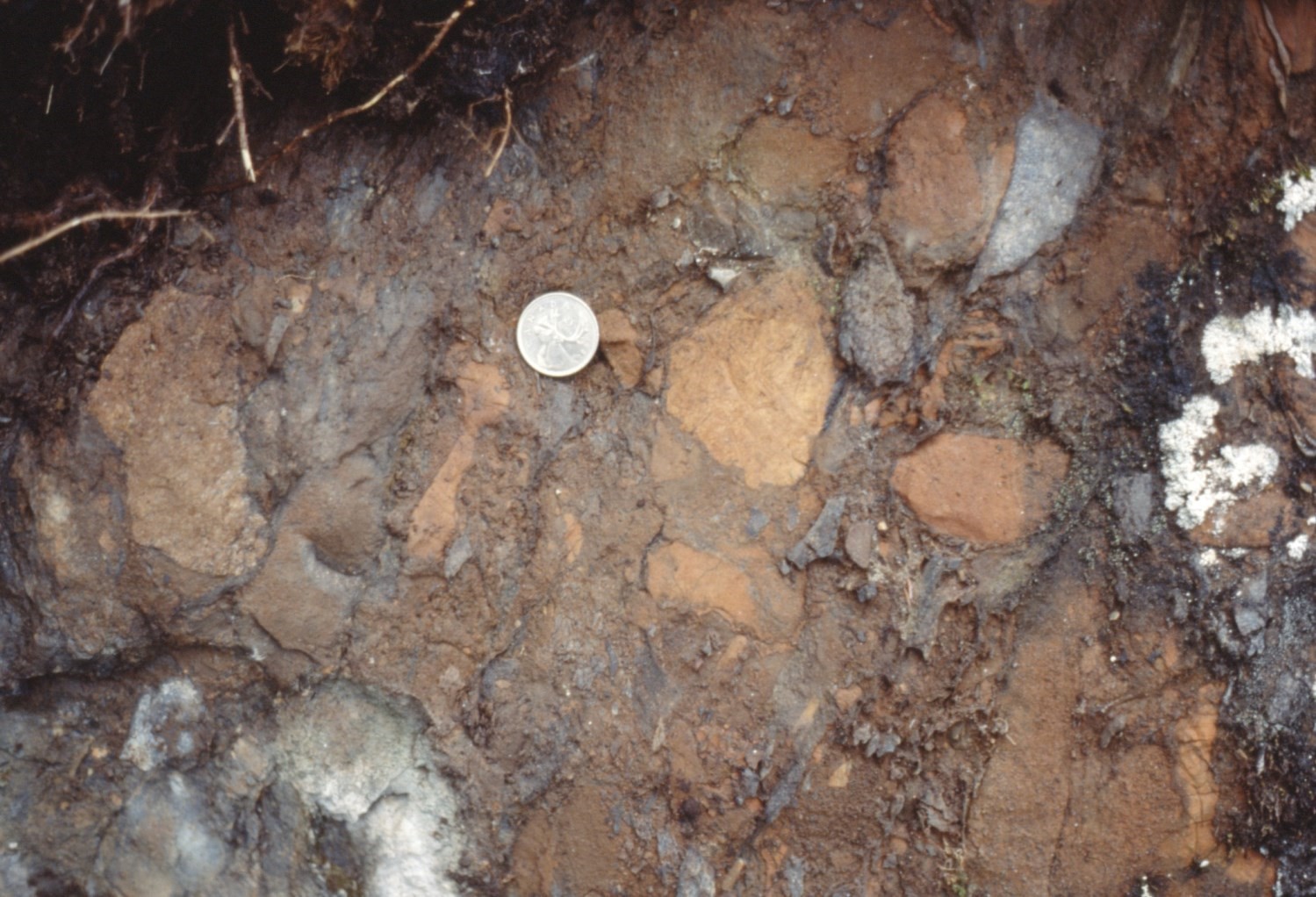 Dolomitic conglomerate beds are centimetre to metre thick. Fragments commonly range from 1 mm to 10 cm in length and can reach 30 cm. They are equidimensional or elongated (tablets), with small fragments being very angular. They consist of very fine-grained dolomite, fissile mudstone, fissile siltstone, carbonatite, chert (rare) and granitoid rocks (rare). The composition and proportions of fragments vary from place to place. Fragments are supported by a grey (in fresh exposure) matrix of sandy dolomite or dolomitic sandstone. These conglomerates may represent debris flows.

Unit pPda7 consists of magnetite tuff, lapilli tuff and agglomerates having a mafic composition and greenish to dark grey patina (Clark, unpublished data). It outcrops SE of Douay Lake over a distance of 12 km (sheet 24C16). Volcanic fragments are 1 ﻿cm to 60 cm long and are commonly flattened by deformation. Magnetite occurs as disseminated crystals up to 1 mm in diameter. Volcanic rocks are locally light coloured due to strong alteration. Metric interstratifications of dolomite having an orange patina are present.

There is little information available on this conglomerate unit (Dressler, 1979). It appears over a distance of 2 km north of Douay Lake (sheet 24F01).

This unit is located west of Le Moyne Lake and extends over a distance of nearly 20 km (sheets 24F01 and 24F02). All biotite-carbonate ± chlorite schists in the area were originally placed in the « Laporte Group » (Dressler, 1979). However, west of Le Moyne Lake, biotite-carbonate ± chlorite schists are found associated with other informal units of the Douay Formation and basalts of the Murdoch Formation (pPmr1). These schists have been assigned to the Douay Formation (pPda9; Clark and Wares, 2004). According to Dressler (1979), biotite-carbonate ± chlorite schist is fine grained, grey in fresh surface and brownish grey in altered patina. This rock is very easily altered and outcrops are of poor quality. Fine bedding and banding are commonly observed. In thin sections, the rock is composed mainly of biotite, carbonate, plagioclase, quartz and opaque minerals. The carbonate content reaches ~40% of the rock.

The Douay Formation belongs to the Gerido Lithotectonic Zone as defined by Clark and Wares (2004). Its outcrop area, which is located west of Le Moyne Lake (sheets 24C16, 24F01 and 24F02), is ~40 km long and 5 km wide. It is oriented NW-SE. The formation is cut by thrust faults, resulting in tectonic repetition of informal units.

A rhyodacite sample of the Douay Formation was dated 1870 ±4 Ma, the youngest age for second-cycle rocks of the Labrador Trough (Machado et al., 1997). This rhyodacite was interpreted by Machado et al. (1997) as being slightly older than carbonatite of the Le Moyne Carbonatite Complex (pPlem).