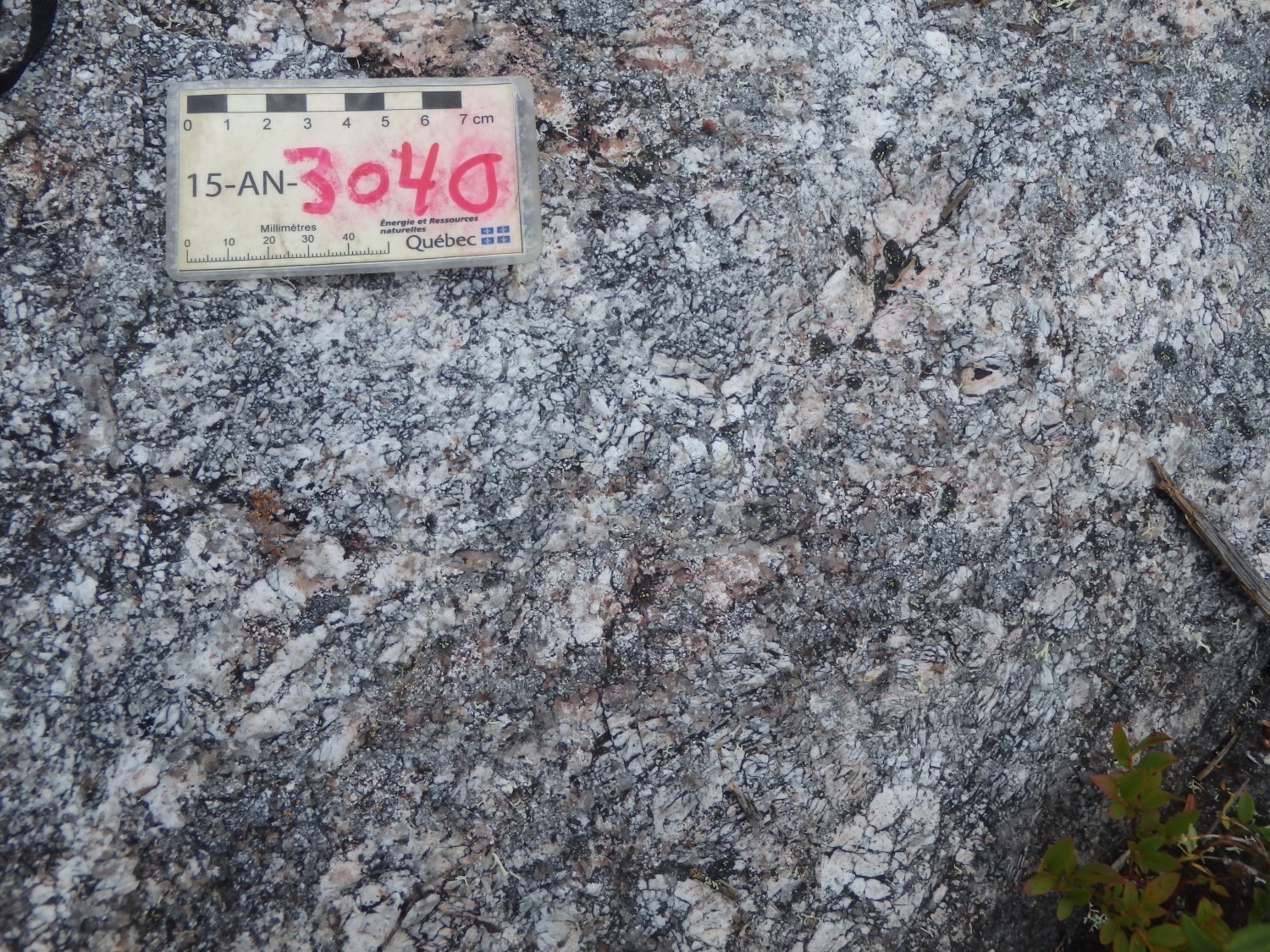 The Desorsons Intrusion was introduced by Bandyayera and Daoudene (2017) to describe a package of granitic to granodioritic rocks emplaced between the Lac Rodayer Pluton’s tonalitic basement, to the north, and the Dusaux Gneissic Complex, to the south. It is limited to the south by the Rivière Nottaway Shear Zone. 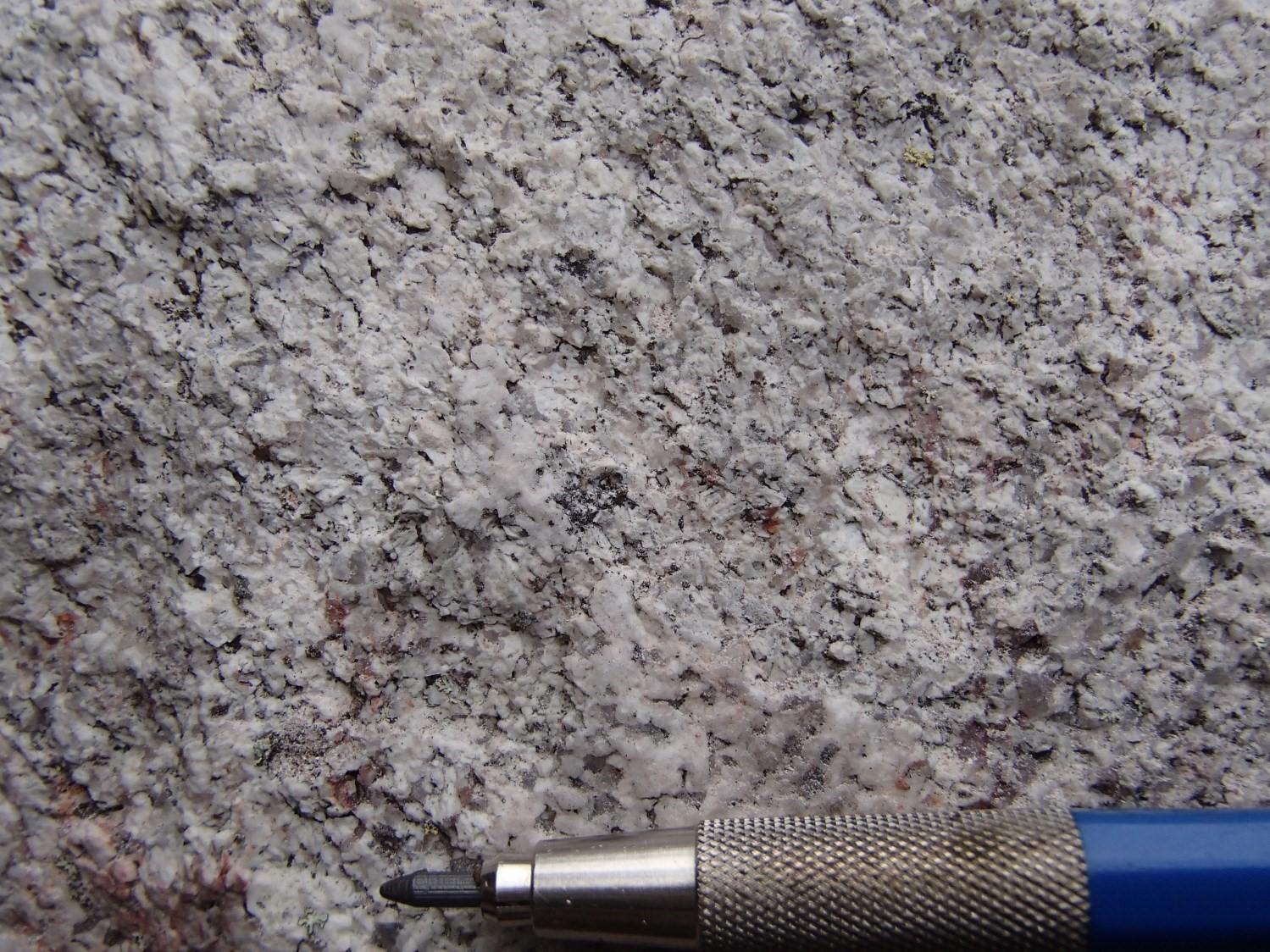 The Desorson Intrusion consists of biotite-magnetite granite and, locally, of granodiorite. On the total magnetic field map, the intrusion is characterized by a higher magnetic susceptibility than the surrounding rocks of the Dusaux Complex or Lac Rodayer Pluton. The rock is massive to weakly foliated, medium to coarse grained and locally hematitized. It has a whitish pink or beige alteration patina. In fresh exposure, it ranges from pinkish, greyish pink to greyish. In places﻿, unit nAdos contains metric and irregular pegmatitic clusters in diffuse or gradual contact with the medium-grained granitic host rock. The Desorsons Intrusion also contains up to 10% gneissic tonalite enclaves that are partially assimilated and 5% quartz diorite enclaves. From a geochemical perspective, granitic and granodioritic rocks of the Desorsons Intrusion are classified as a type I trondhjemite-granodiorite-granite series, which are metaluminous to peraluminous.

The Desorsons Intrusion is associated with an elongated magnetic anomaly, which is 30 km long and 15 km wide, along the Rivière Nottaway Shear Zone.

A granite sample was collected for U-Pb dating (David, 2018). Results from the youngest age group gave an average age of 2729.8 ±7.5 Ma, interpreted as the crystallization age of the Desorsons Intrusion. The sample also contains older zircons grouped around 2825.4 ±4.0 Ma, interpreted as the inherited zircons’ age. This age is similar to the minimum crystallization age of all Lac Rodayer Pluton rocks, estimated at 2823 Ma from dating of nucleus-free zircons (Davis et al., 1995).

The Desorsons Intrusion (2729.8 ±7.5 Ma; David et al., in preparation) cuts rocks of the Lac Rodayer Pluton (2823 Ma; Davis et al., 1995) and of the Dusaux Complex. To the northeast, it is cut by the Biteau Syenite (2693.6 ±4.6 Ma; David et al., in preparation). The Desorsons Intrusion contains partially assimilated tonalite enclaves, as well as granodiorite clusters in diffuse or gradual contact with the granitic host rock. This would explain the ages of 2730 Ma obtained for the emplacement of the granitic facies and 2825 Ma for the oldest facies similar to those of the Lac Rodayer Pluton.