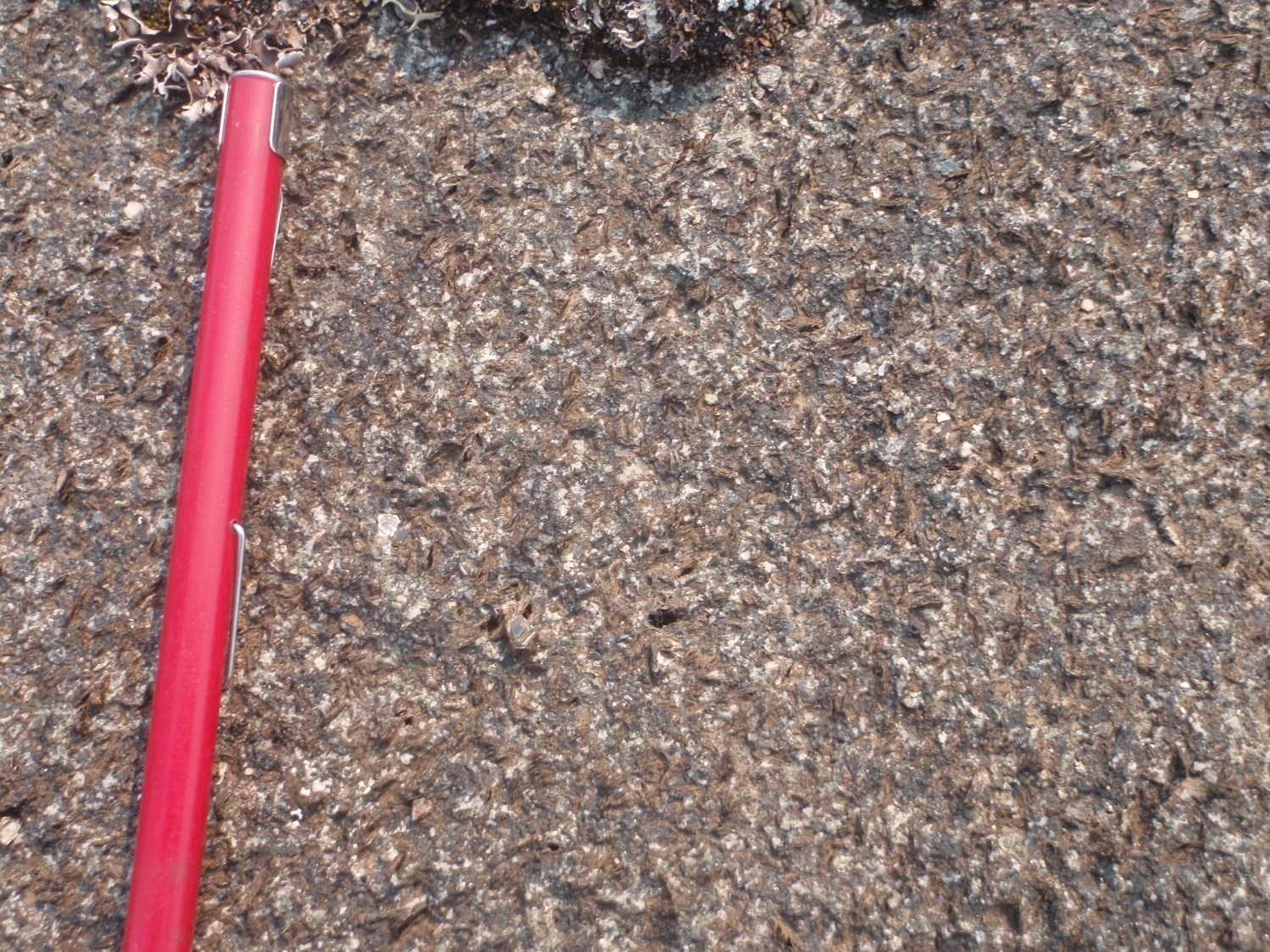 The Fayot Suite was introduced in the Jeannin Lake area (Lafrance et al., 2016) to group massive lamprophyre intrusions. A detailed petrological study of the Fayot Suite was also carried out as part of an undergraduate thesis (Chartier, 2016). 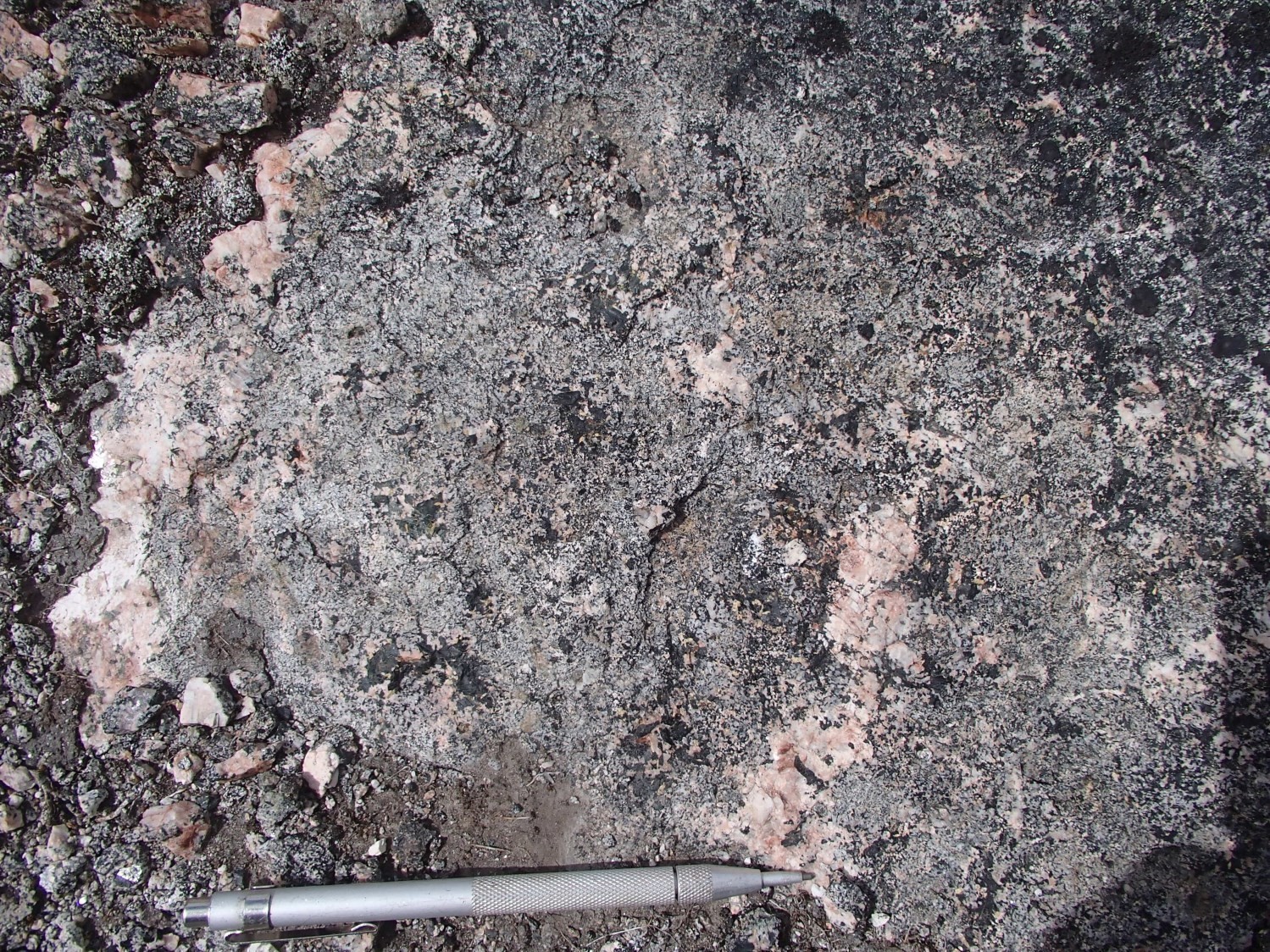 The Fayot Suite consists of undeformed melanocratic (minette) and leucocratic (vogesite) lamprophyres. However, slight deformation, marked by the presence of kinks in biotite, was observed in thin sections (Chartier, 2016). These rocks are intruded by centimetric to decimetric granitic dykes that are not part of the same intrusive sequence.

Minette has a heterogeneous appearance characterized by the presence of green or black ferromagnesian mineral clusters and pink felsic clusters, millimetric to decimetric, rounded or elongated. These felsic clusters, having the same composition of vogesite, show irregular and undulating contacts and are locally dismembered (Chartier, 2016). Minette varies from very fine to coarse grained. In general, ferromagnesian minerals form millimetric to centimetric clusters, while K-feldspar (sanidine) occurs as small crystals in the matrix or as large poikilitic crystals. These are altered, rich in ferromagnesian mineral inclusions and exhibit perthitic and anti-perthitic textures. Plagioclase and quartz (<3%) are interstitial or as inclusions in ferromagnesian minerals. Vogesite forms either injections or clusters within minette, or a kilometric intrusive mass that contains minette clusters having irregular margins (Chartier, 2016). These observations could indicate an immiscibility process of magmatic fluids or late segregation.

The mineralogy of the two types of lamprophyres is similar, although the content of ferromagnesian minerals differs: 35 to 80% in minette, 5 to 35% in vogesite. On the other hand, the plagioclase content is greater in vogesite (<15%) than in minette (<1%). Ferromagnesian minerals consist of brown biotite, green hornblende, actinolite and diopside in roughly equal proportions. Green hornblende and actinolite are located on clinopyroxene grain edges, which they completely replace in places. Biotite is mostly ferriferous (lepidomelane), rich in zircon inclusions and chloritized in several places. Accessory minerals are abundant and generally coarse. These include, in order of importance, sphene, apatite, epidote, opaque minerals (magnetite and sulphides), allanite, zircon, carbonates and fluorite. 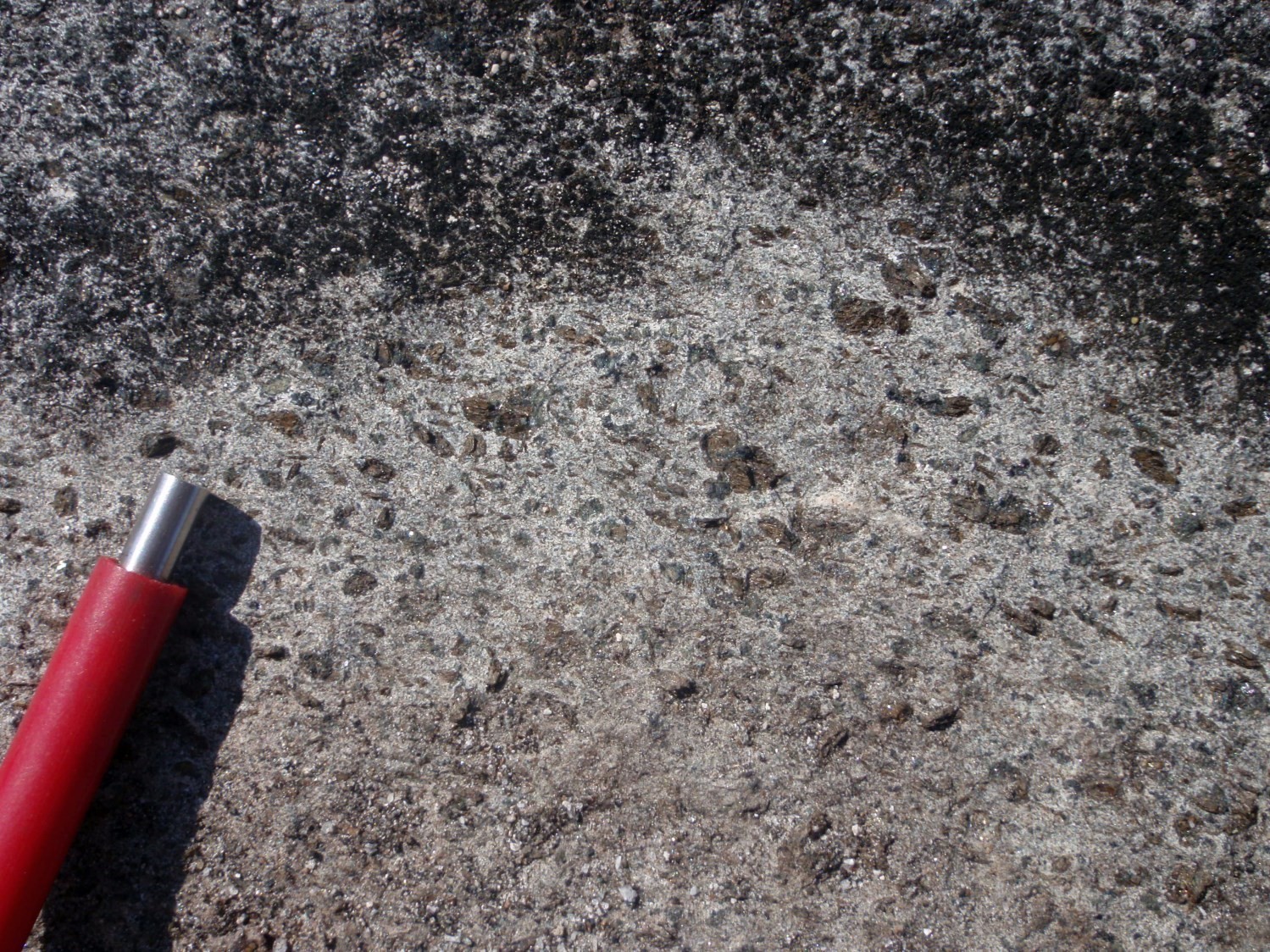 A decimetric lamprophyre dyke cutting porphyritic granodiorite of the De Pas Granitic Suite was observed near the northernmost Fayot Suite intrusion. This rock consists of a feldspar-rich fine-grained matrix that contains microphenocrystals and millimetric biotite-clinopyroxene-amphibole clusters.

Several lithogeochemical analyses, including those carried out as part of the Chartier (2016) undergraduate thesis, have highlighted the rare earth enrichment of these intrusions (≤1256 ppm total REE). Chartier’s (2016) work also indicates that this enrichment is concentrated in accessory minerals.

An age around 1815 Ma, considered to be crystallization, was obtained from a minette sample collected in the summer of 2014 by the Geological Survey of Canada, in the northwestern portion of the Brisson Lake area (sheet 24H04).

Despite their age similar to that of the youngest rocks of the De Pas Supersuite, those in the Fayot Suite have not been affected by regional deformation or regional metamorphism. A lamprophyre dyke assigned to the Fayot Suite cuts a porphyraceous granodiorite of the De Pas Granitic Suite. No other crosscutting relationships were observed in the field.