This unit, known for its rare earth element potential, was introduced under the term “Brisson Lake Peralkaline Granite” by Pillet (1985). It had previously been described by Taylor (1979) as an adamellitic rock (quartz monzonite), and by Bélanger (1984) as an amphibole hyperalkaline granite. This granite was renamed “Lac Brisson Pluton” in the regional compilation by the Ministère’s geologists in 2003. The Lac Brisson Pluton is equivalent to the Strange Lake peralkaline complex in Labrador, described by Zajac et al. (1984), Currie (1985) and Miller (1985).

The name of this unit comes from Brisson Lake, located near the Quebec-Labrador border (sheet 24A08). Note that the term “Strange Lake” refers to mineralized zones and mining property. 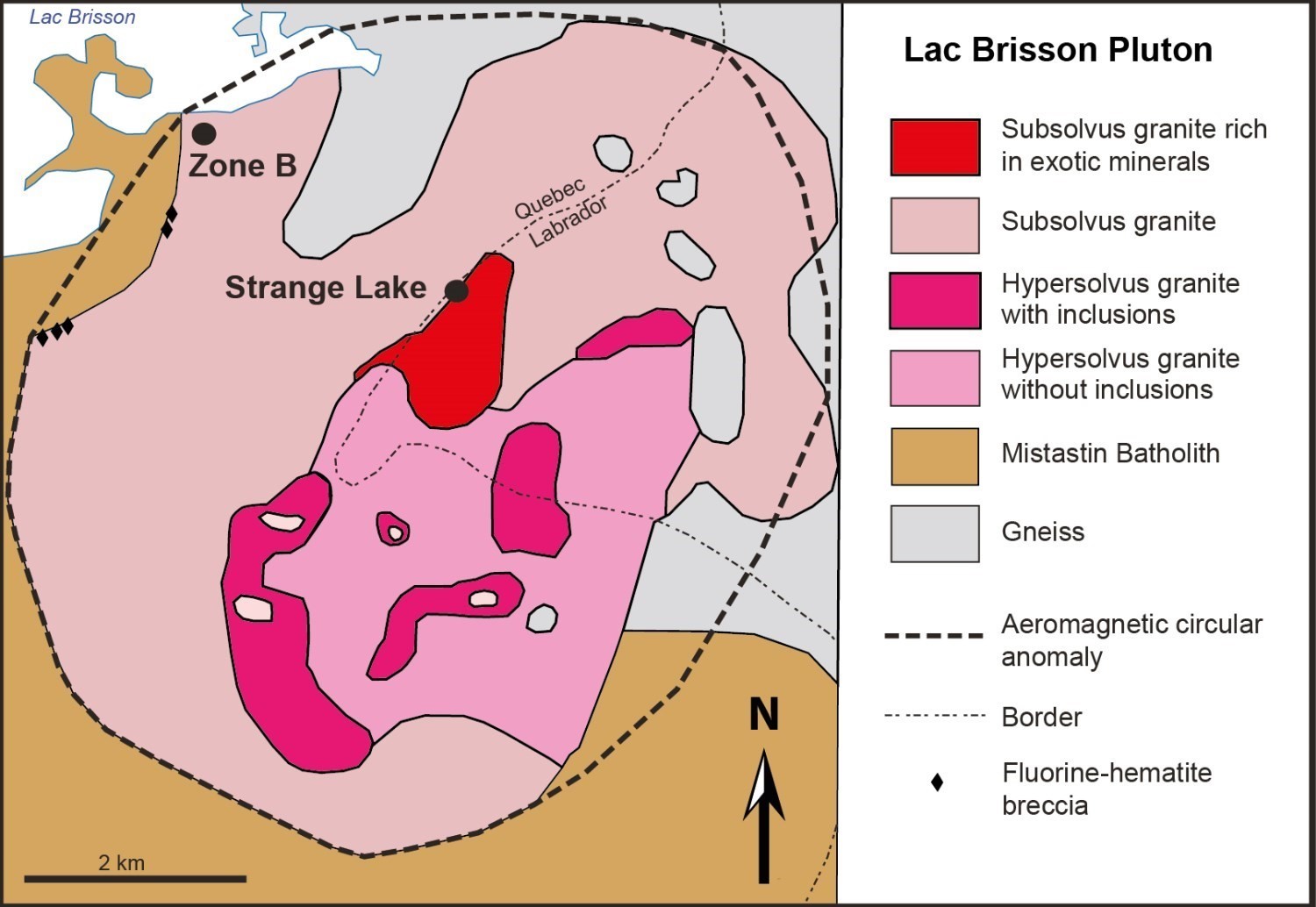 The Lac Brisson Pluton contains several facies that are distinguished primarily by their mineralogy. These facies, defined by Nassif (1993), include hypersolvus granite and subsolvus granite. Within the same facies, the rock’s grain size can vary considerably. Fluorite-hematite breccia zones were reported by Pillet (1985) at the edge of the intrusion, specifically to the NW and SW.

Hypersolvus granite is a granite that crystallized above the solvus temperature and contains only one type of feldspar in the form of mesoperthite. Lac Brisson Pluton hypersolvus granite is generally poor in exotic minerals (<5%) such as elpidite, armstrongite, fluorite, gittinsite, zircon, gadolinite, sphene, pyrochlore and narsarsukite. The rock is greyish to greenish, massive and even grained, but includes fine to coarse-grained facies. Mesoperthite (30-70%) occurs as euhedral to subhedral crystals with edges reaching 12 mm and that contain albite exsolutions as films, veins and small, more or less globular zones. In addition to anhedral quartz (15-25%, up to 50% locally) interstitial with mesoperthite crystals, hypersolvus granite contains arfvedsonite amphibole (10-20%) and, in places, aegirine, zirconosilicates, fluorite and astrophyllite. Arfvedsonite occurs as isolated, interstitial and poikilitic crystals, occasionally zoned. In places, amphiboles form irregular clusters of intergrowth crystals. 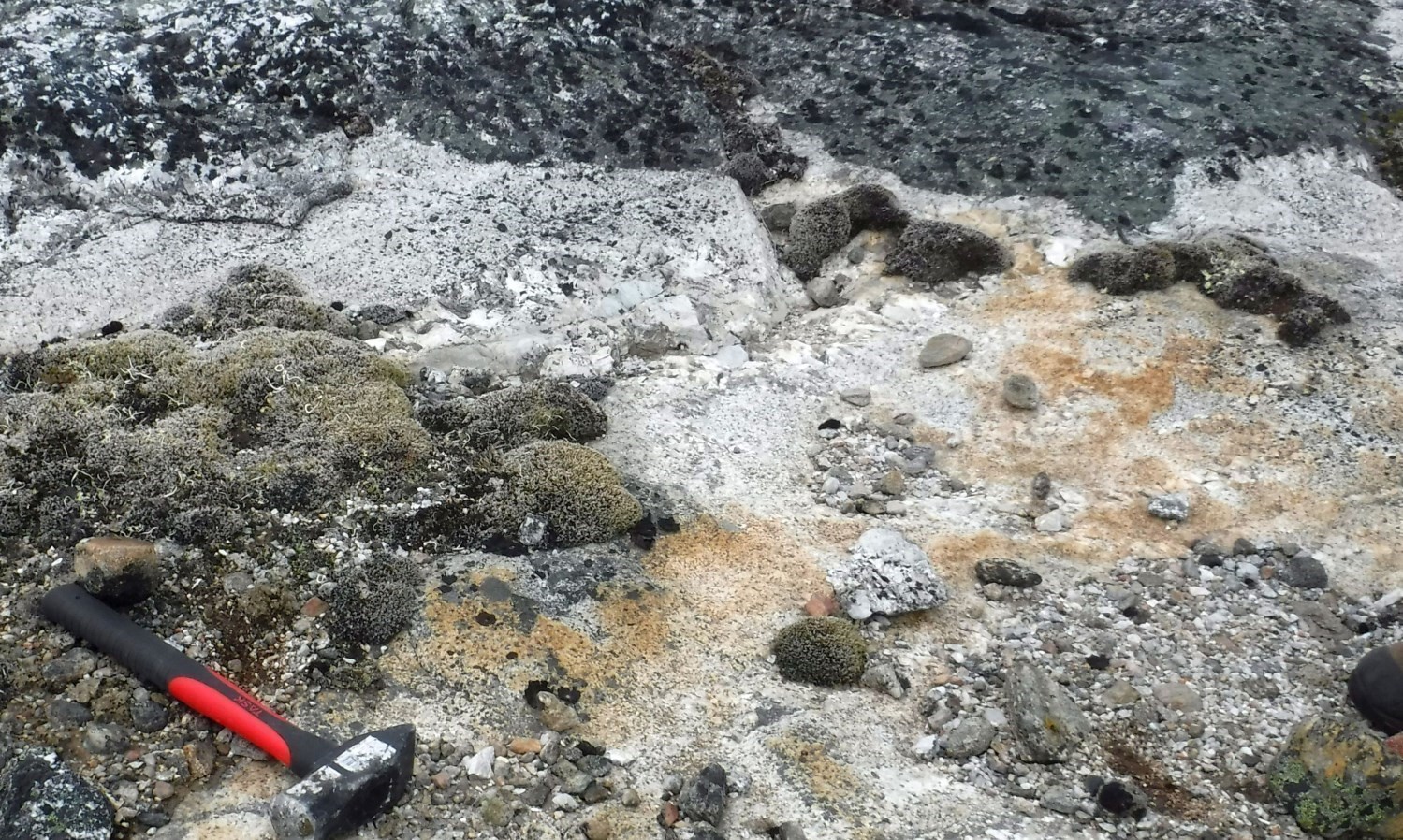 Subsolvus granite is a granite that crystallized below the solvus temperature and contains both types of feldspar (plagioclase and K-feldspar). Unlike hypersolvus granite, subsolvus granite therefore includes two types of feldspar that crystallized separately below the orthose-albite solvus temperature. The colour of the rock varies from cream to brownish red. Submillimetric feldspar crystals consist of 20 to 35% microcline, and 10 to 15% albite predominantly as laths. In general, euhedral quartz (30-40%) is more abundant in this unit and would have crystallized earlier than in the case of hypersolvus granite (Nassif, 1993). Ferromagnesian minerals include 10% arfvedsonite as phenocrystals or small crystals in the matrix, and aegirine (0-10%). Locally, the proportion of arfvedsonite can be as much as 50% of the rock at the edge of hypersolvus granite. Amphibole crystals are not zoned. Subsolvus granite has a higher exotic mineral content. Pyrochlore, zirconosilicates, sphene, fluorite and opaque minerals are present in accessory amounts.

Although a pegmatitic phase is also recognized in hypersolvus granite, it is mainly associated with subsolvus granite. The most important mineralized zones are located in and around the pegmatitic facies. In places, pegmatite of subsolvus granite forms ~20 m thick subhorizontal veins locally zoned. This zoning is characterized by a margin rich in quartz, K-feldspar, arfvedsonite, zirconosilicates and titanosilicates, and a core of fluorite, quartz and minerals bearing rare earth elements.

Subsolvus granite is also characterized by strong hydrothermal alteration, particularly intense in and around the pegmatitic phase. In these alteration zones, arfvedsonite is altered to aegirine, while zirconosilicates and titanosilicates are replaced by quartz and gittinsite or sphene, respectively. Calcite, prehnite, kainosite and zircon are observed as interstitial accessory phases.

A crystallization age around 1240 Ma was obtained in a fine-grained hypersolvus granite. Several cooling ages between 1275 Ma and 1120 Ma were obtained from K-Ar analyses on amphiboles and Rb-Sr analyses on total rocks (Wanless et al., 1973; Currie, 1985; Pillet et al., 1989).

According to the feldspar’s crystallization sequence, hypersolvus granite is interpreted as the oldest and least evolved unit of the Lac Brisson Pluton (Nassif, 1993).