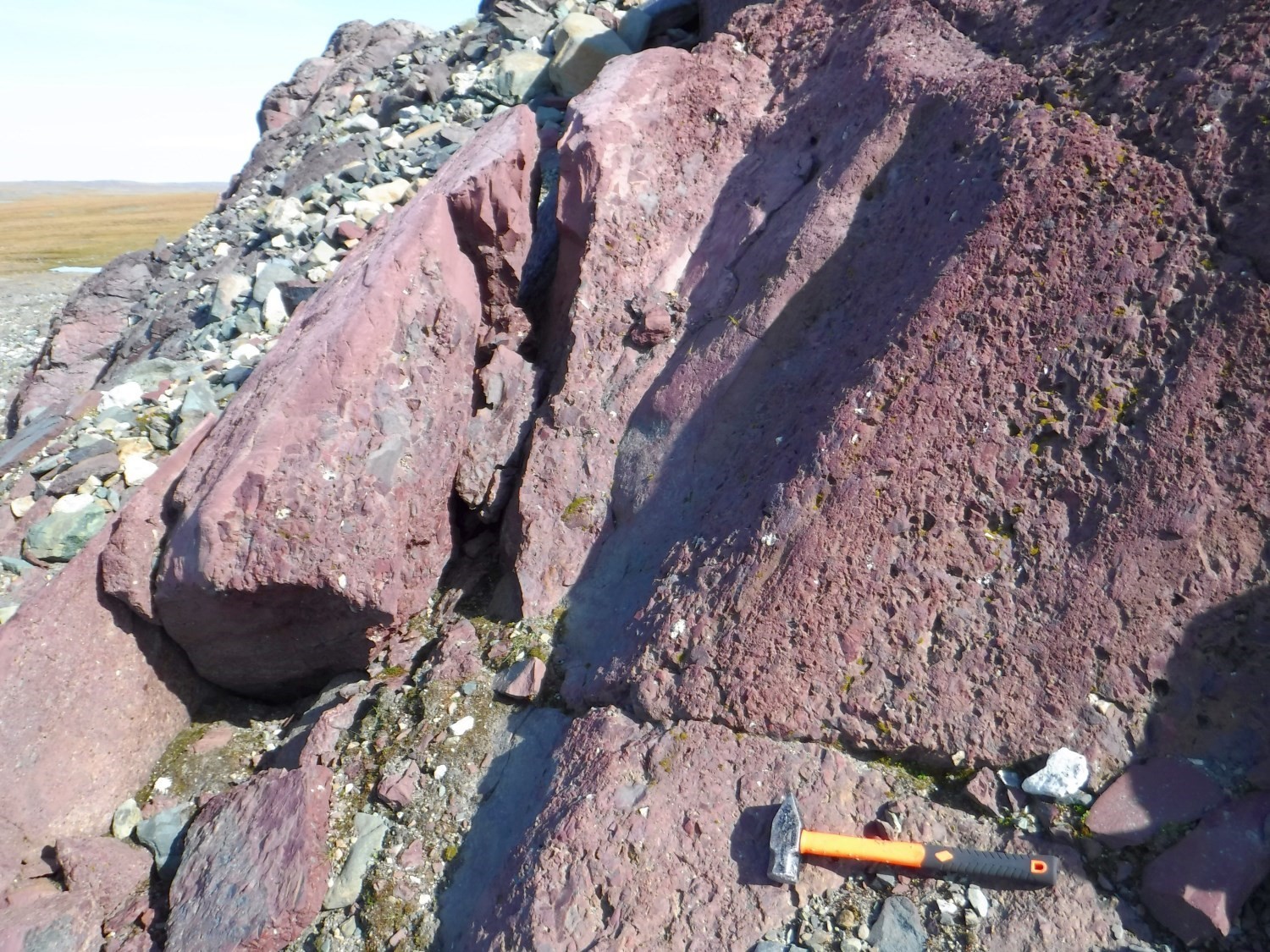 Beaudette et al. (2020) introduced the Hubert Formation to individualize sedimentary beds unconformably overlying (angular discordance) the Chukotat Group. Beall (1959) was the first to observe tectonically intercalated sedimentary layers within the flows of the Chukotat Group. These beds were subsequently mentioned by Roy (1989), Moorhead (1989) and Barrette (1990b), without, however, recognizing the angular unconformity observed more recently (Beaudette et al., 2020). Layers of pink sandstone and conglomerate overlying the pyroxene-olivine basalts of the Chukotat Group are also reported further south by St-Onge et al. (2006). 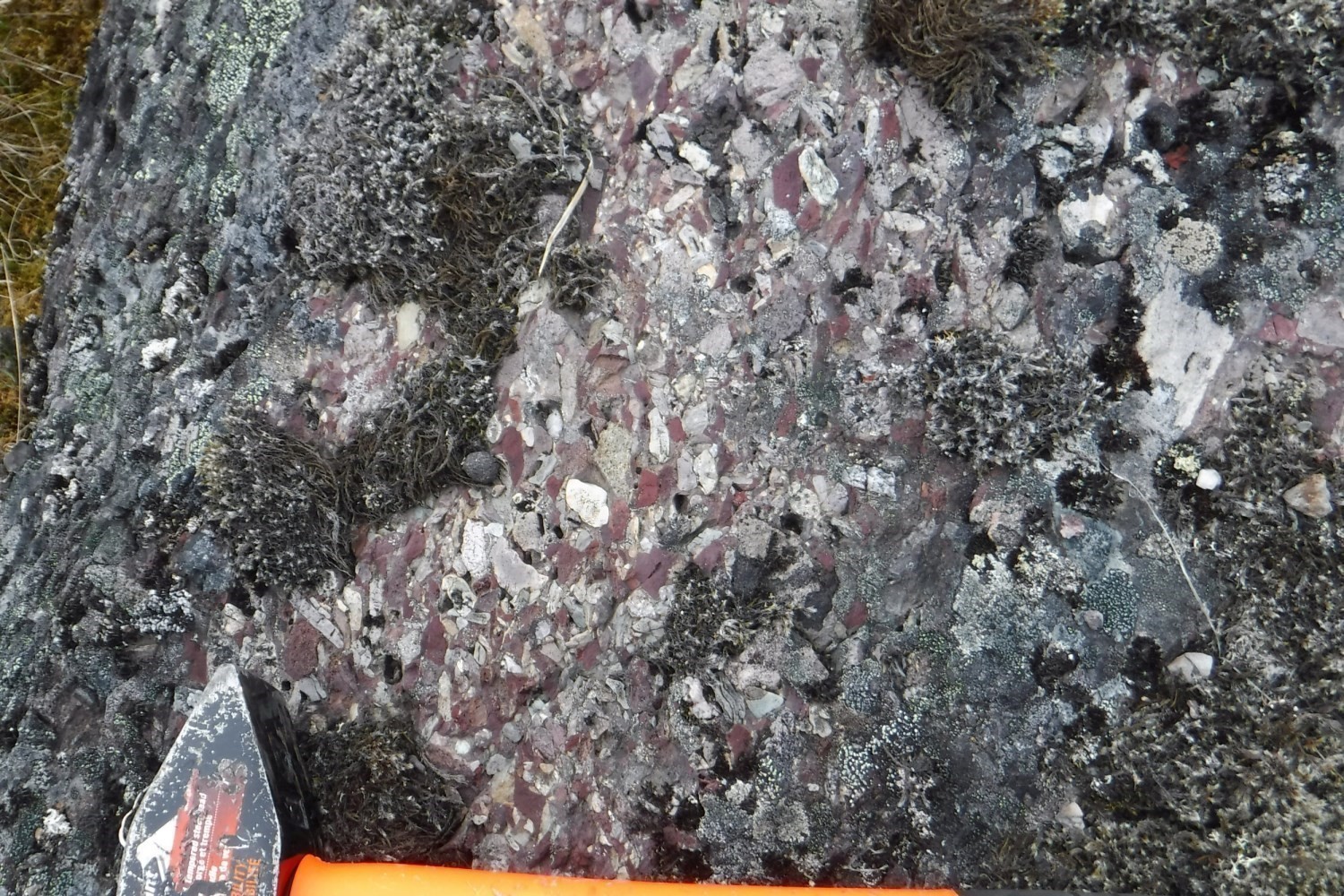 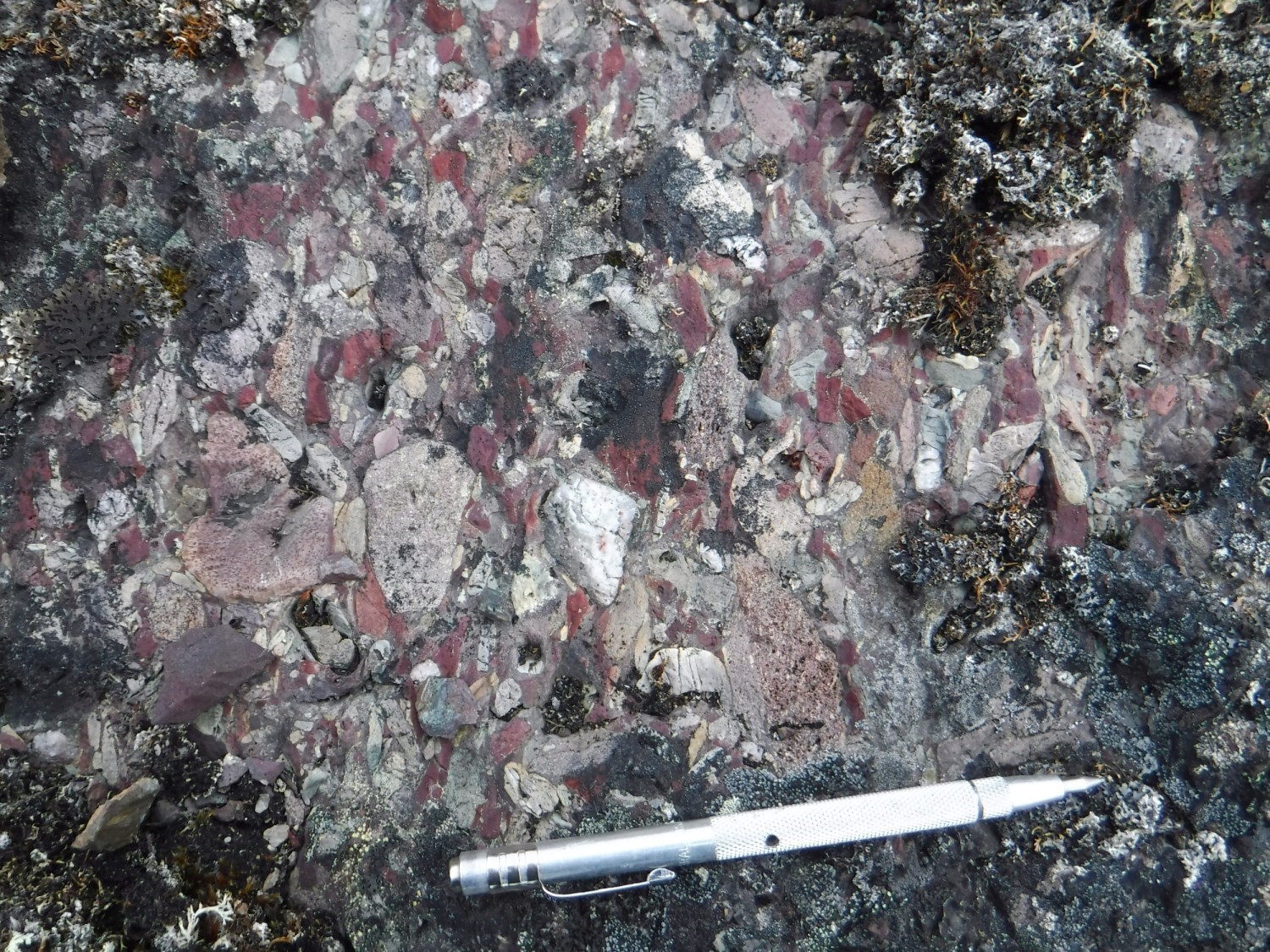 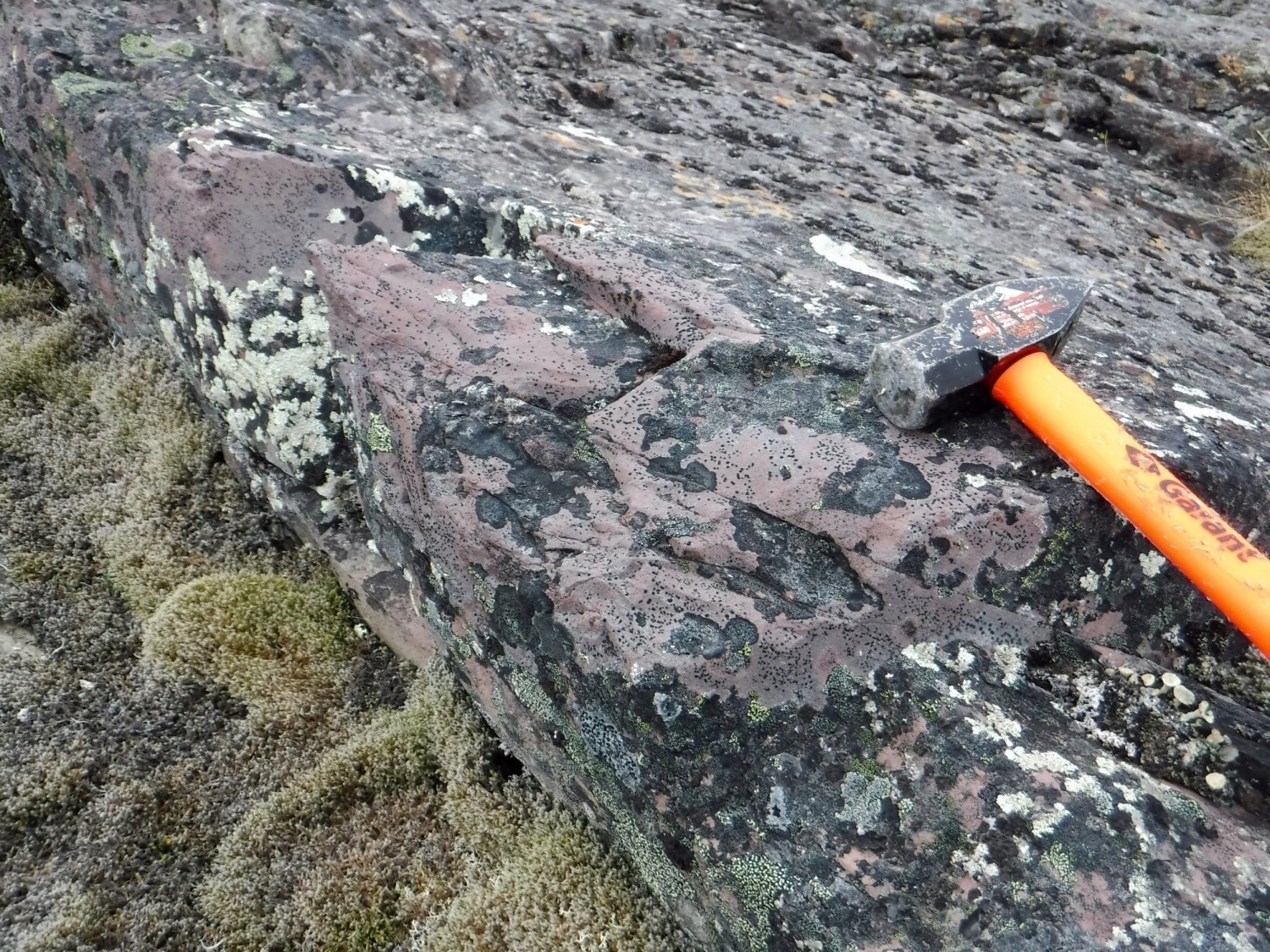 The Hubert Formation consists of coarse siliciclastic beds of pebble conglomerate and sandstone having a brick-red patina and fresh surface. The presence of conglomerate beds and thin (4-40 cm) sandstone beds displaying parallel laminae, as well as the absence of fine deposits, imply a proximal energetic deposition environment probably of fluvial origin. Parallel laminations and several erosion surfaces allow the measurement of primary bedding with normal polarity towards the NW. The rocks of the Hubert Formation are not magnetic.

Polymictic conglomerate contains joint fragments; the proportion of the sandy matrix is <20% and generally almost non-existent. Fragments are 5 mm to 25 mm in size and are distributed as follows: a majority of angular reddish aphanitic volcanic rock fragments (20-90%), subangular to subrounded aphanitic or very fine-grained greenish grey rock fragments interpreted as being of volcanic origin (up to 15%) and, in smaller amounts, subrounded milky chert fragments (up to 5%), rounded massive gabbro fragments (up to 5%) and subrounded to rounded massive or foliated intermediate to felsic intrusive rock fragments (0-15%). Clastic sequences display normal sorting towards the NW. They consist of conglomerate covering a thickness of 50 cm to 2 m at the base and overlain by a sandstone bed 5 cm to 40 cm thick. The latter is generally truncated by the erosion surface of the next sequence.

In thin section, arenite is composed of an assemblage of subangular quartz and rarely twinned feldspar grains (50%), chlorite (30%) and interstitial carbonates (5%), as well as disseminated hematite (10%) and epidote (10%), as well as trace amounts of muscovite flakes. Epidote is heterogeneously distributed, either disseminated in the matrix or in clusters.

Conglomerate is characterized by a very low spaced schistosity defined by the local orientation of fragments and muscovite flakes observed in thin section. The difference between primary bedding (245°) and foliation (260°) is 15°.

The Hubert Formation outcrops as elongated sedimentary basins of modest dimensions with a surface area of ≤1 km2. Outcrops are located at the structural and stratigraphic summit of the Chukotat Group, directly south of the boundary between the Northern and Southern domains, in the wall of the Bergeron Fault. The true thickness of the formation observed on outcrop 2019-GL-2108 is ~90 m. Other small basins have been mapped or reported further south by Beall (1959) and St-Onge et al. (2006), these being tectonically intercalated between volcanic sequences of the Chukotat Group.

The Hubert Formation has been dated twice recently. The first sample (Davis, 2022) was taken directly south of the Bergeron Fault (outcrop 2019-GL-2108), the second (BNB-16-039), further south (Bleeker and Kamo, 2020). The maximum age of deposition in the north is 1844 Ma, whereas it is 1831 Ma in the south, implying that imbrication in the Ungava Orogen is later than 1831 Ma. In contrast, the presence of foliated fragments at outcrop 2019-GL-2108 implies that shortening had already begun prior to basin formation and would therefore predate 1844 Ma. The main detrital signature is mostly concentrated between 1860 Ma and 2000 Ma, which is consistent with the range of ages observed in both the Southern and Northern domains. For both samples, the early detrital signal consists mainly of Paleoproterozoic populations concentrated between 2.5 Ga and 1.9 Ga, whereas the Archean signal is very weak, suggesting that the felsic intrusive clasts and the gneisses would not be derived from erosion of Superior Province rocks. 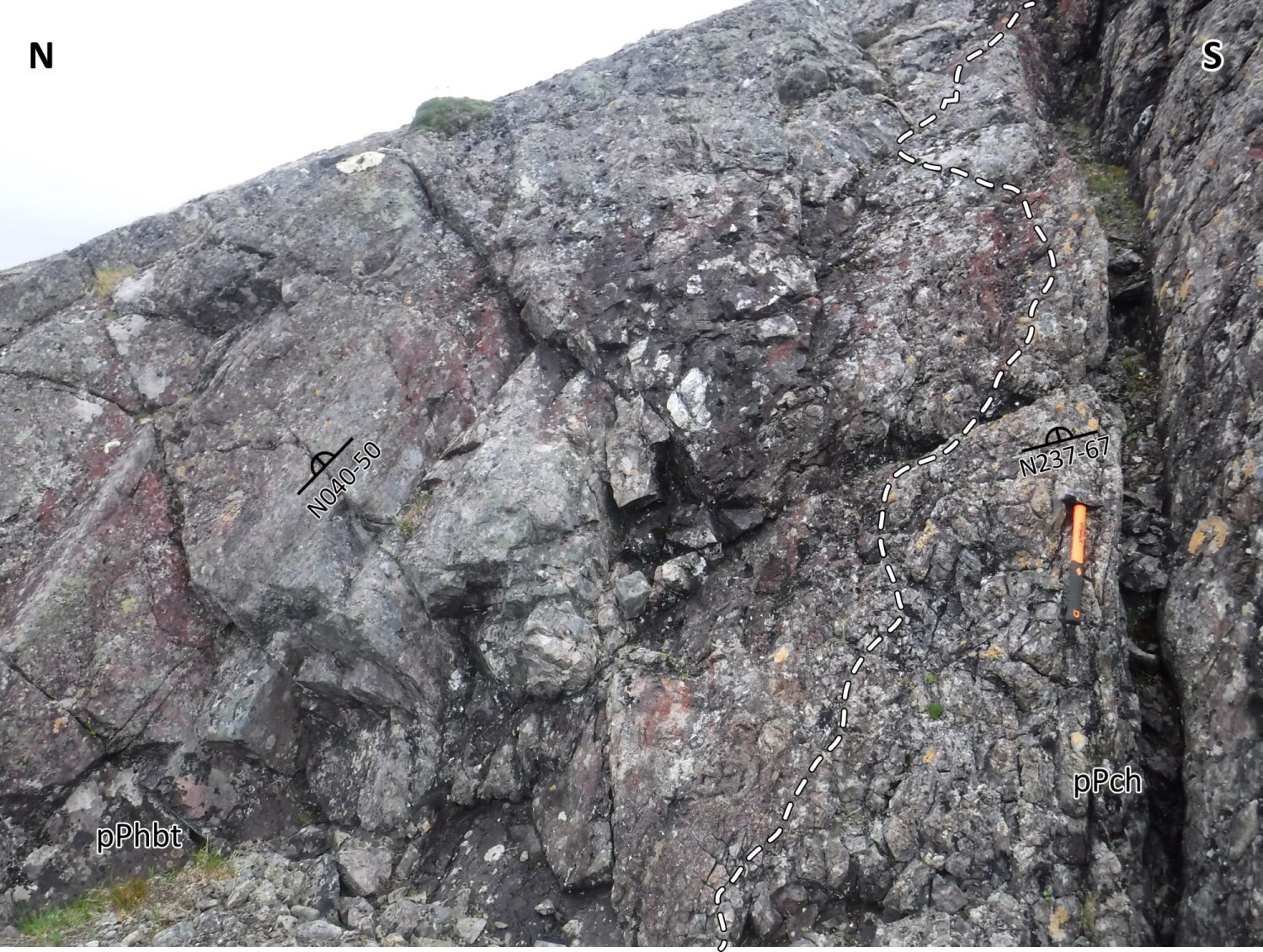 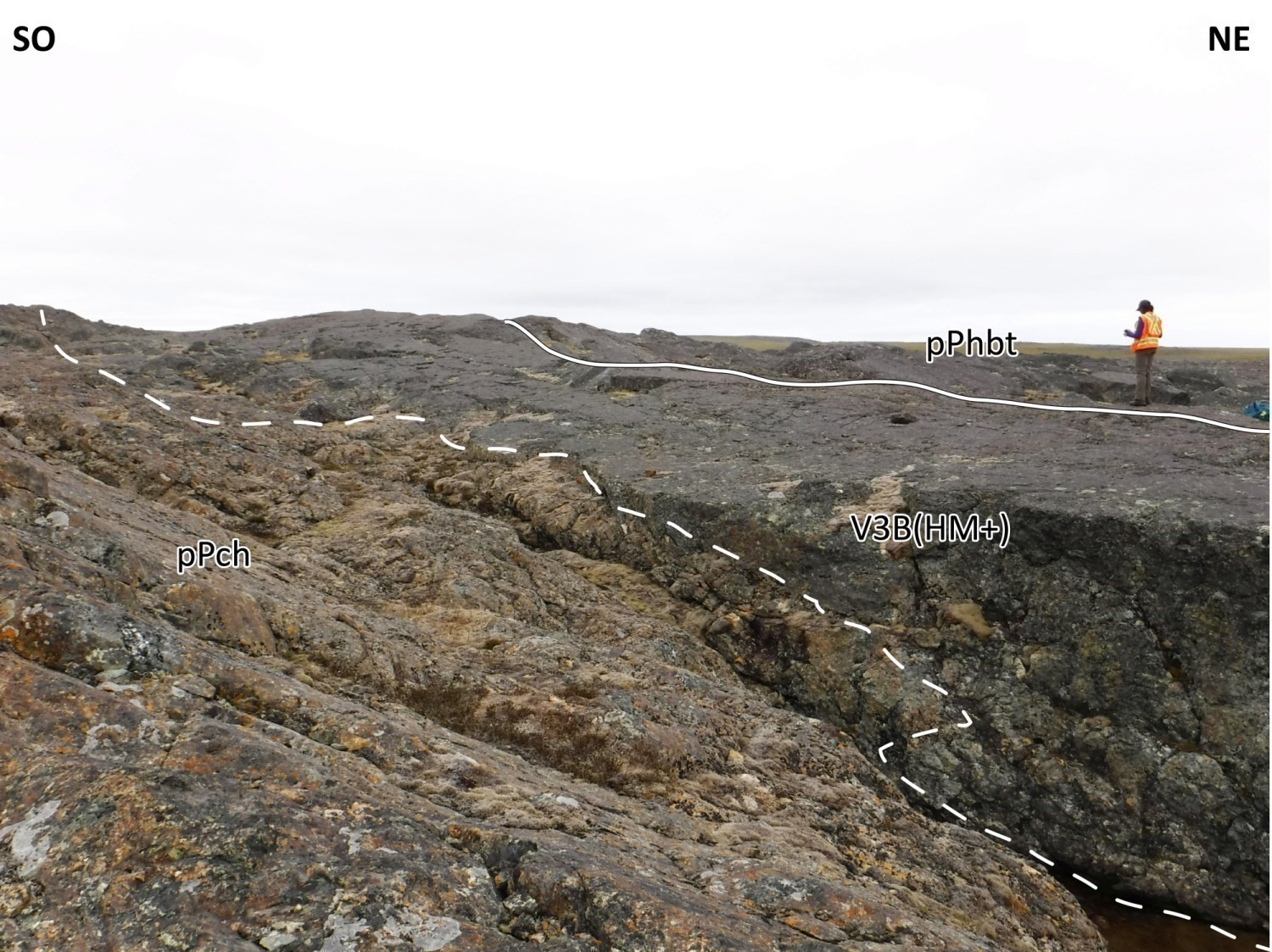 The Hubert Formation unconformably overlies (angular discordance) basalt of the Chukotat Group. The unconformity was observed on outcrops 2019-GL-2108 and 2019-GM-5188. It is marked by high hematitization and epidotization of the underlying volcanic rocks. Its stratigraphic position and the fluvial origin of the deposits imply the emergence of the Southern Domain before collision with the Northern Domain. Although volcanic fragments are undoubtedly the product of erosion of Chukotat Group basalt, the origin of intrusive rock fragments remains to be determined. The study of detrital populations will help define the sources and validate the hypothesis stated above if the ages correspond to those of the Superior Province. If not, the Hubert Formation could represent a syntectonic basin resulting from collision of the Northern and Southern domains. St-Onge et al. (1992) initially suggested that these sedimentary layers were a redundancy of the Nituk Formation exhumed by a thrust. Bleeker and Kamo (2020) conducted a study of detrital populations in a conglomerate sample and tend toward a synorogenic origin of the basins, whose intercalation within the flows would be the result of the final imbrication of the Ungava Orogen.