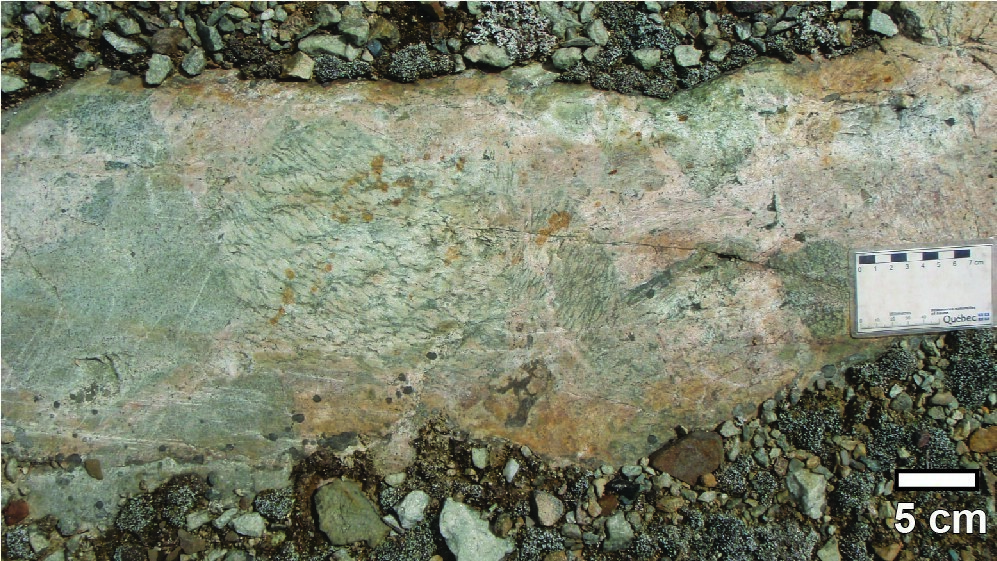 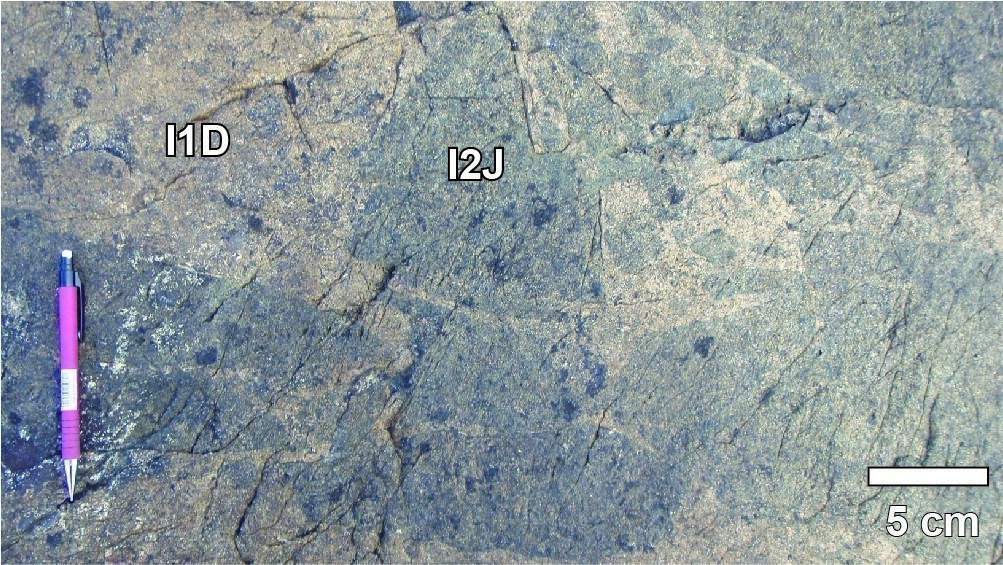 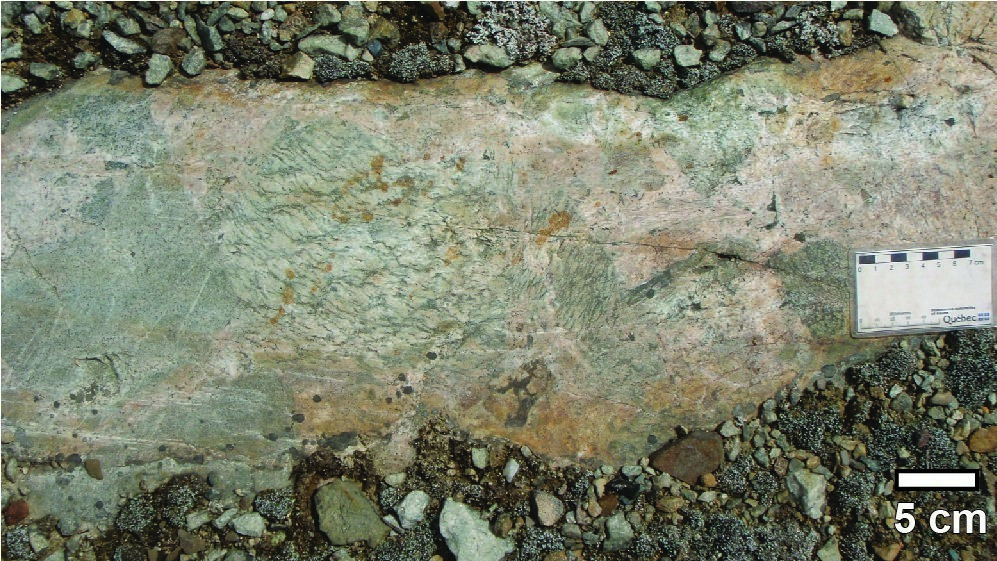 According to Leclerc et al. (2017, page 28): “Heterogeneous diorite is the oldest unit. It consists of a hornblende facies (subunit nAchi1a) and a non-mappable quartz facies that are typically cut by minor intrusions, dykes and veinlets of biotite-hornblende tonalite or porphyritic trondhjemite. Heterogeneous diorite is mainly observed at the pluton’s periphery and south of Chibougamau Lake and also includes a brecciated facies that will be described below […]. North of the lake, it was observed in the Merrill Mine area.” 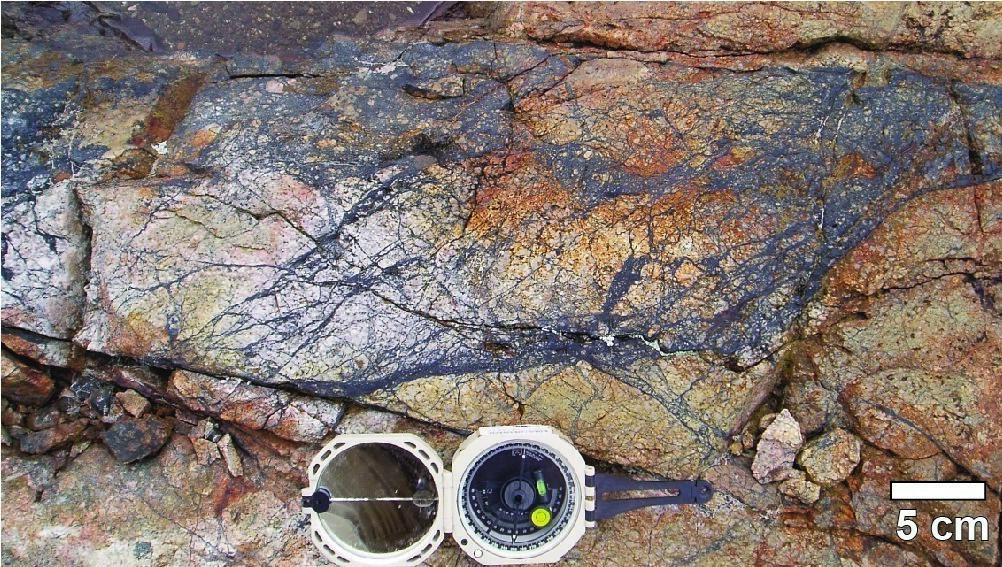 According to Leclerc et al. (2017, page 28): “The central part of the Chibougamau Pluton is dominated by an even-grained to porphyritic biotite tonalite unit. This heterogeneous unit contains subangular to rounded, generally decimetric to metric, enclaves of hornblende diorite and quartz diorite. […] This unit hosts the Queylus Breccia.” 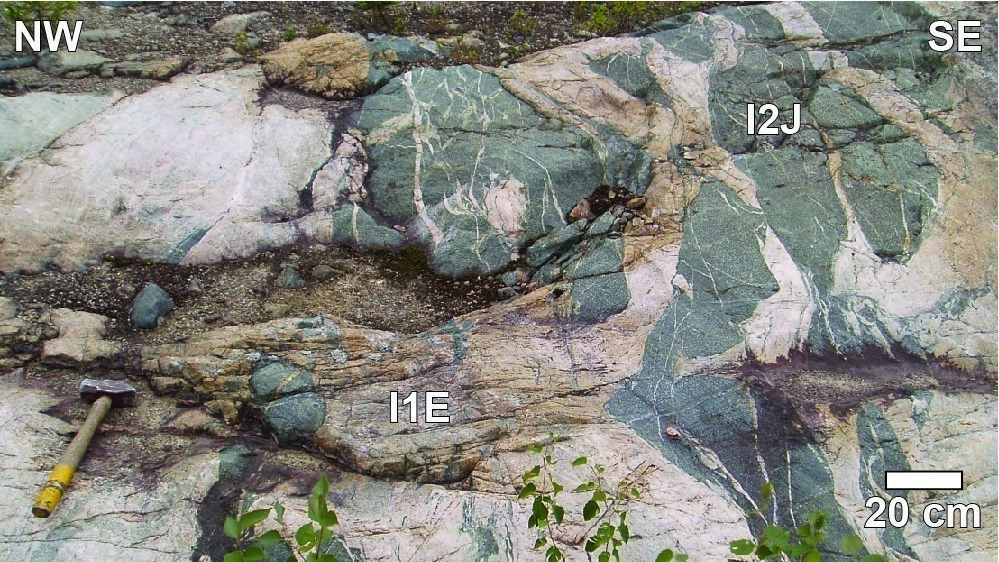 According to Leclerc et al. (2017, page 28): “The biotite trondhjemite and porphyritic trondhjemite unit, also known as leucotonalite, outcrops south of the Merrill Mine in the Devlin and Corner Bay deposits’ area (SW of NTS sheet 32G16), and in the Lamothe area (east of sheet 32G16). It is characterized by a small amount of mafic minerals (<5%), an abundance of quartz and a porphyroclastic texture.”

According to Leclerc and Houle (2013, page 9): “The southwestern edge of the Chibougamau Pluton is characterized by an intrusion breccia zone marking contact between volcanic rocks of the Andy Member (Waconichi Formation) and unit nAchi1. This breccia has a matrix of foliated heterogeneous tonalite. It contains fine-grained diorite enclaves, highly rounded, fractured and cut by veinlets of tonalite, aphyric basalt and quartz gabbro with plagioclase crystals (<5 mm).”

Gabbro and diorite dykes (nAchi5) correspond to diorite and meladiorite dykes of Maillet (1978). They are particularly abundant in the NW portion of Caché Lake, where they cut intrusive rocks of the Lac Doré Intrusive Suite (Houle, 1990; Leclerc et al., 2017).

The Chibougamau Pluton covers an area of 450 km2 and follows the Chibougamau Anticline’s axial trace, whose E-W orientation shifts to NE-SW as it approaches the Grenville Front Tectonic Zone (Daigneault and Allard, 1990, 1994).

The Chibougamau Pluton cuts volcano-sedimentary rocks at the base of the Roy Group (Obatogamau and Waconichi formations), as well as mafic to ultramafic rocks of the Lac Doré Intrusive Suite. The contact of the pluton’s southern part is characterized by a discordance above which lie sedimentary rocks of the Opemisca Group (Stella and Haüy formations). The eastern part of the Chibougamau Pluton is cut, on the one hand, by granodiorite intruding into the Mistassini Fault (oriented NNE-SSW) and, on the other, locally by biotite tonalites characterizing the Parautochton.