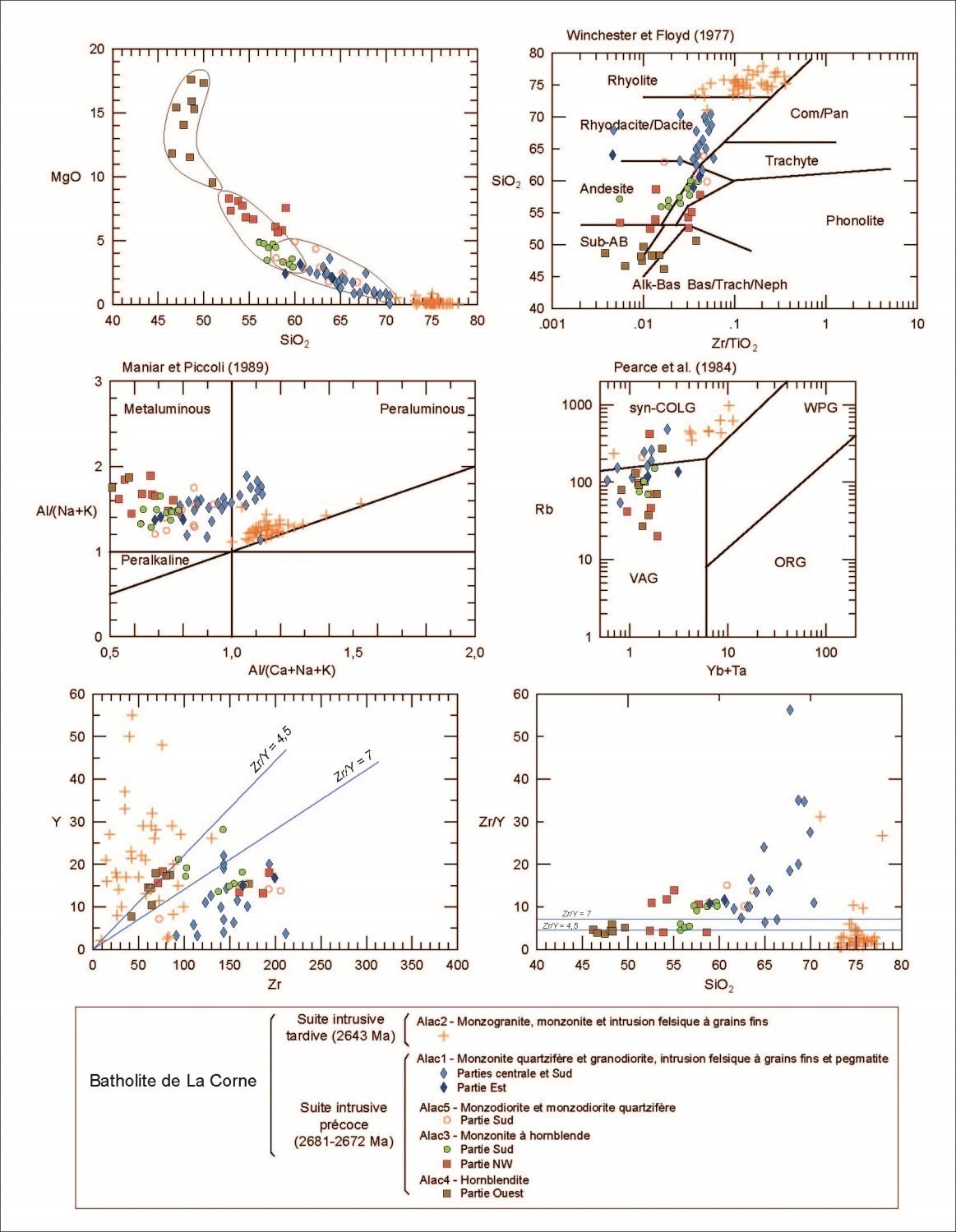 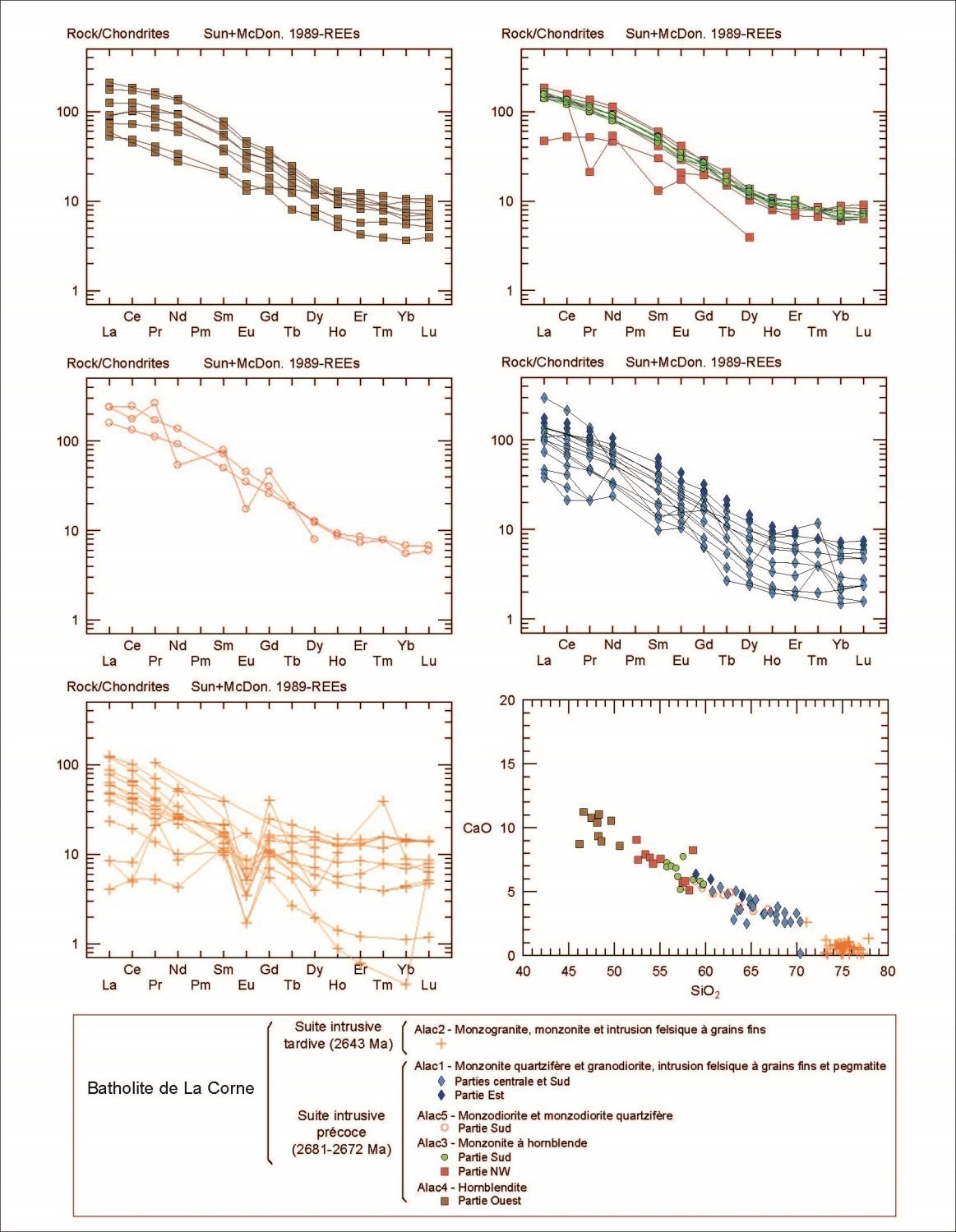 The La Corne Batholite is included in the vast Preissac-La Corne Plutonic Suite, which outcrops in the southern Abitibi Subprovince, about 40 km NE of the town of Val-d’Or (Tremblay, 1950; Dawson, 1966). It forms a synkinematic to late-kinematic intrusive complex intruded in the Archean (U-Pb dating 2681-2643 Ma; Feng and Kerrich, 1991) into volcanic rocks of the Malartic and Kinojévis groups, and into sedimentary rocks of the Caste Formation. Specifically, the La Corne Batholith consists of two distinct magmatic suites: 1) an early metaluminous dioritic to granodioritic suite (units nAlac4, nAlac3, nAlac5 and nAlac1), which contains many metasedimentary and metavolcanic xenoliths; and 2) a late peraluminous monzogranitic suite (unit nAlac2), moderately to non-foliated, xenolith-free, with associated pegmatitic aureole mineralized in Li, Be, Mo and Ta. These pegmatites are found in granitic parts, as well as in surrounding lithologies.

The La Corne Batholith is located in the eastern part of the Preissac-La Corne Plutonic Suite, it is elongated along a N-S axis. Tectonic foliation, marked by orientation of biotite and muscovite flakes, is evident on the margins of the batholith; however, this foliation becomes less pronounced in its centre. The whole batholith is surrounded by an aureole of lithium granitic pegmatites, mainly developed in the western and northern parts, and within which many mineralized zones and prospects have been recognized (see deposit records cited in Pilote [2018]; Dawson, 1966; Boily et al., 1989; Boily, 1995; Ste-Croix and Doucet, 2001; Pilote, 2018; Pilote et al., 2019). The Québec Lithium Mine, located on the northern contact of the La Corne Batholith, is part of this aureole. Lithium pegmatites also contain varying amounts (trace-2%) of colombo-tantalite, molybdenite and beryl. Brett et al. (1976) were the first to suggest that early hornblendite masses (unit nAlac4) located only in the western part of the batholith (sheet 32D08) be incorporated.

The work of Bourne and Danis (1987), carried out almost exclusively in the SW portion of the La Corne Batholith, proposed subdividing the early suite into two distinct plutonic facies. The first, called the inner zone (unit nAlac3), contains less than 5% modal quartz and has compositions ranging from brecciated biotite-hornblende gabbro to monzonite. The second facies, called the outer zone, contains more than 5% modal quartz and consists of biotite-hornblende quartz diorite (nAlac5) that progressively evolves towards biotite-hornblende granodiorite (nAlac1). The transition between each facies is relatively steep, but continuous. These two facies are reversely zoned, i.e. cores are mafic and margins are more felsic. A strip of metasomatized granodioritic rocks appears on contact with the outer suite and surrounding sedimentary rocks. This strip is characterized by myrmekitic plagioclase and plagioclase with albite margins, as well as higher quartz and biotite contents than other plutonic rocks in the outer zone.

The early dioritic to granodioritic suite covers almost all of this batholith. In particular, it outcrops along a N-S-oriented strip located between the villages of Vassan and La Corne on contact with surrounding volcano-sedimentary rocks. A few outcrops also appear on the eastern and western shores of Malartic Lake (sheet 32D08). In general, dioritic to granodioric intrusive masses consist of small, shallow outcrops with poor exposure compared to monzogranitic phases.

The different units of the La Corne Batholith are described below in chronological order, from oldest to youngest: nAlac4, nAlac3, nAlac5, nAlac1 and nAlac2. 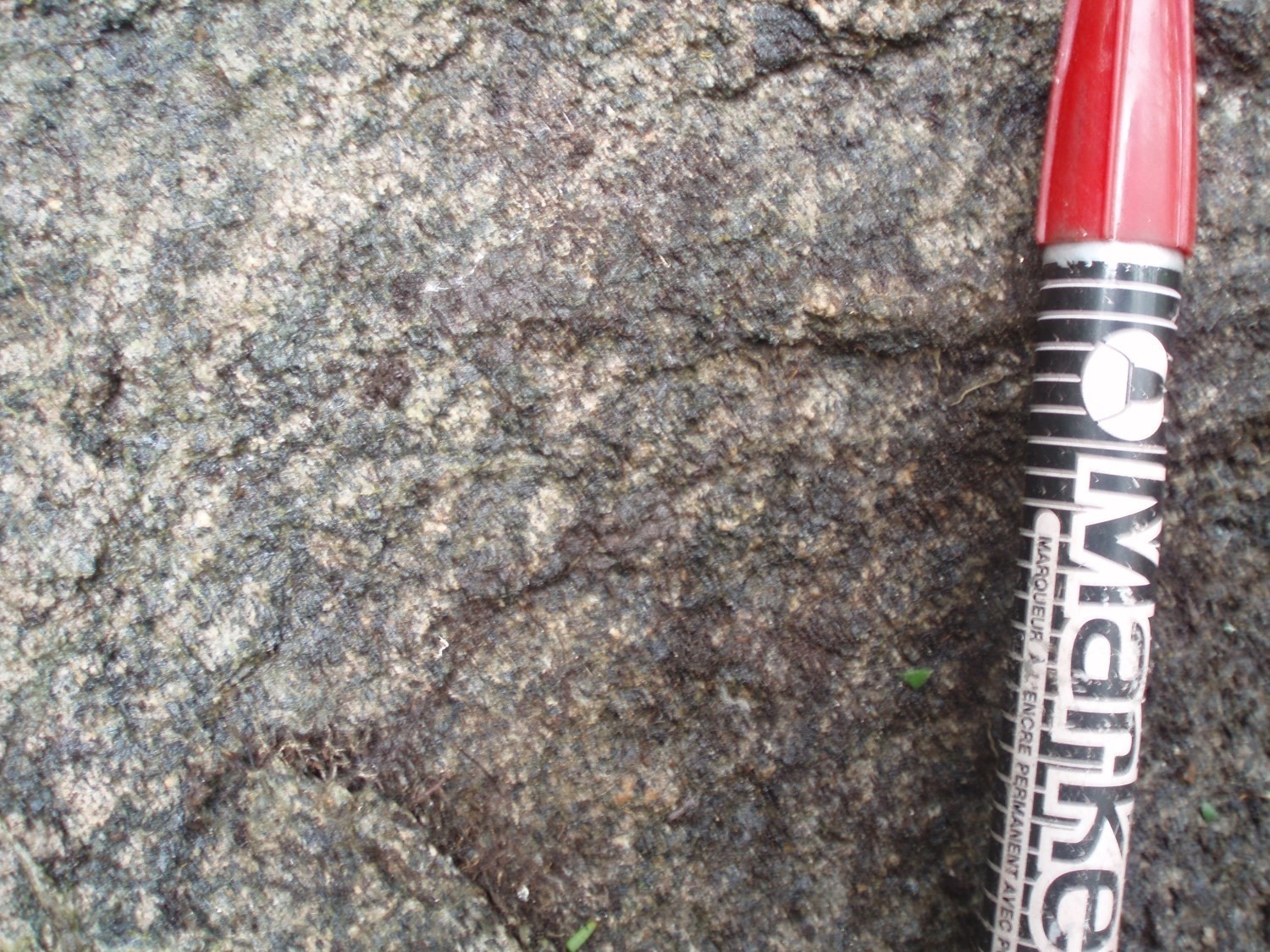 Unit nAlac4 is found south (sheet 32D08) and SE (sheet 32C05) of La Motte Lake. It is mainly composed of partially biotitized, chloritized and epidotized granular hornblende. The rock is black to greenish. Hornblende crystals range from 2 mm to 1 cm long. Feldspar content ranges from 10 to 70%. Altered pyroxenes are observed locally. Interestingly, Dawson (1966) interpreted this unit more as metamorphosed mafic volcanics. However, for Brett et al. (1976), this unit was interpreted as an early facies of the La Corne Batholith due to field cross-cutting relationships between different intrusive phases, and the presence of numerous amphibolite and sedimentary rock enclaves in hornblendite. Recent works (Boily, 1992; Pilote, 2018; Pilote et al., 2019) favour the latter interpretation. 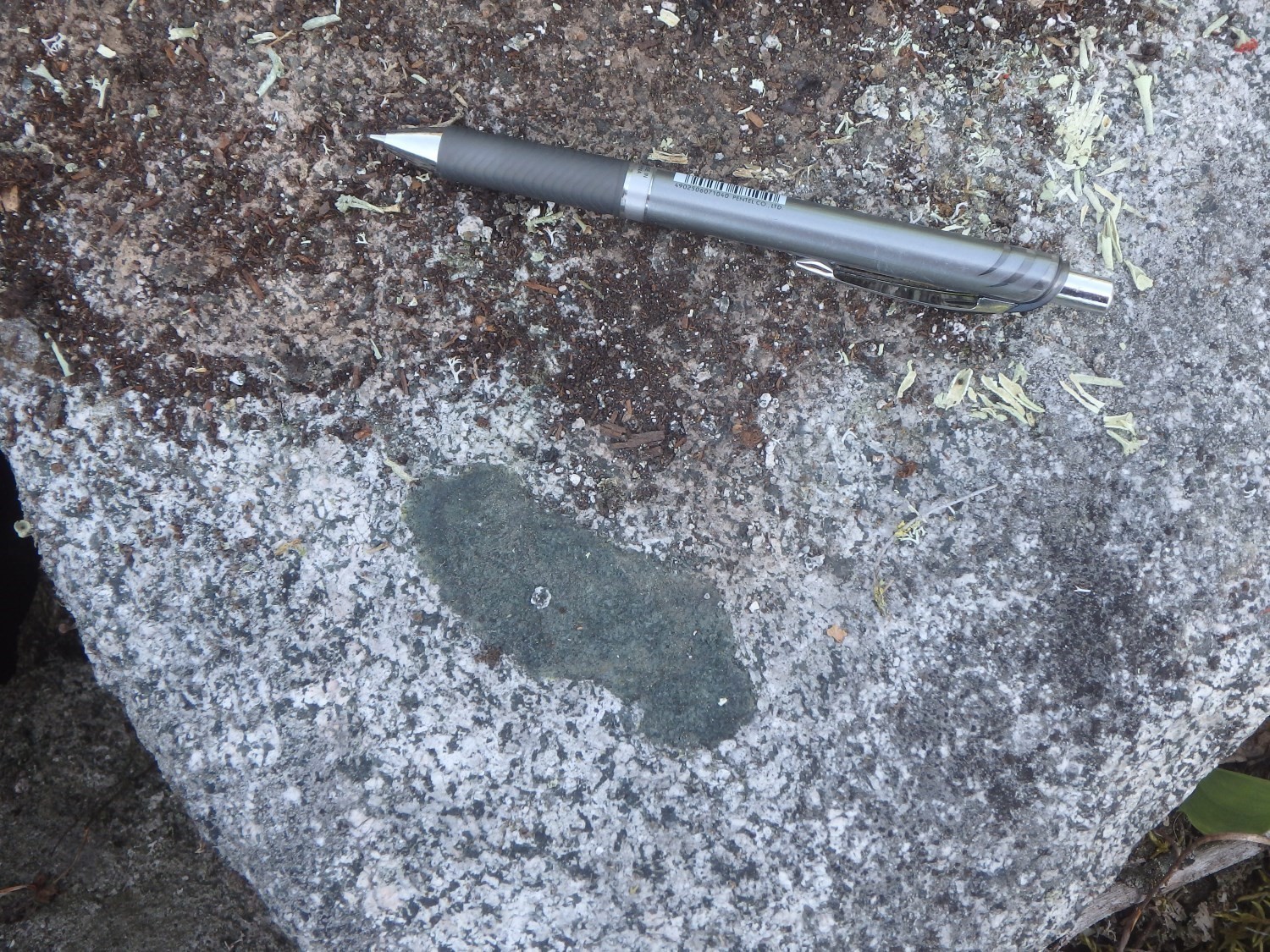 This unit is found in two main locations: 1) east of La Motte Lake, in the middle of the SE quarter of sheet 32C05; and 2) in the SW corner of sheet 32C05-200-0102 where it occurs as several intrusive masses elongated along NW and NE general directions (Pilote et al., 2019). Hornblende monzonite is composed of variable proportions of feldspar and chloritized (40-70%) and slightly epidotized hornblende. The rock is medium grained and commonly foliated. Contact between hornblende monzonite and hornblendite is generally progressive. Hornblende monzonite occurs as massive outcrops or dykes cutting hornblendite and surrounding mafic volcanics. In the latter case, large clusters of actinolite crystals mark the edges of volcanic units. The presence of metamorphosed volcanic and sedimentary rock enclaves is common in these rocks (Brett et al., 1976; Pilote et al., 2019). In most cases, volcanic enclaves are foliated and with orientations that diverge from the regional schistosity’s general trajectory. This unit cuts the Fiedmont Formation and some large NW-oriented longitudinal faults (Pilote et al., 2019). These observations confirm that these intrusions are at least late tectonic in age. In general, magnetic susceptibility of hornblende monzonite is slightly higher than that of adjacent intrusive lithologies. 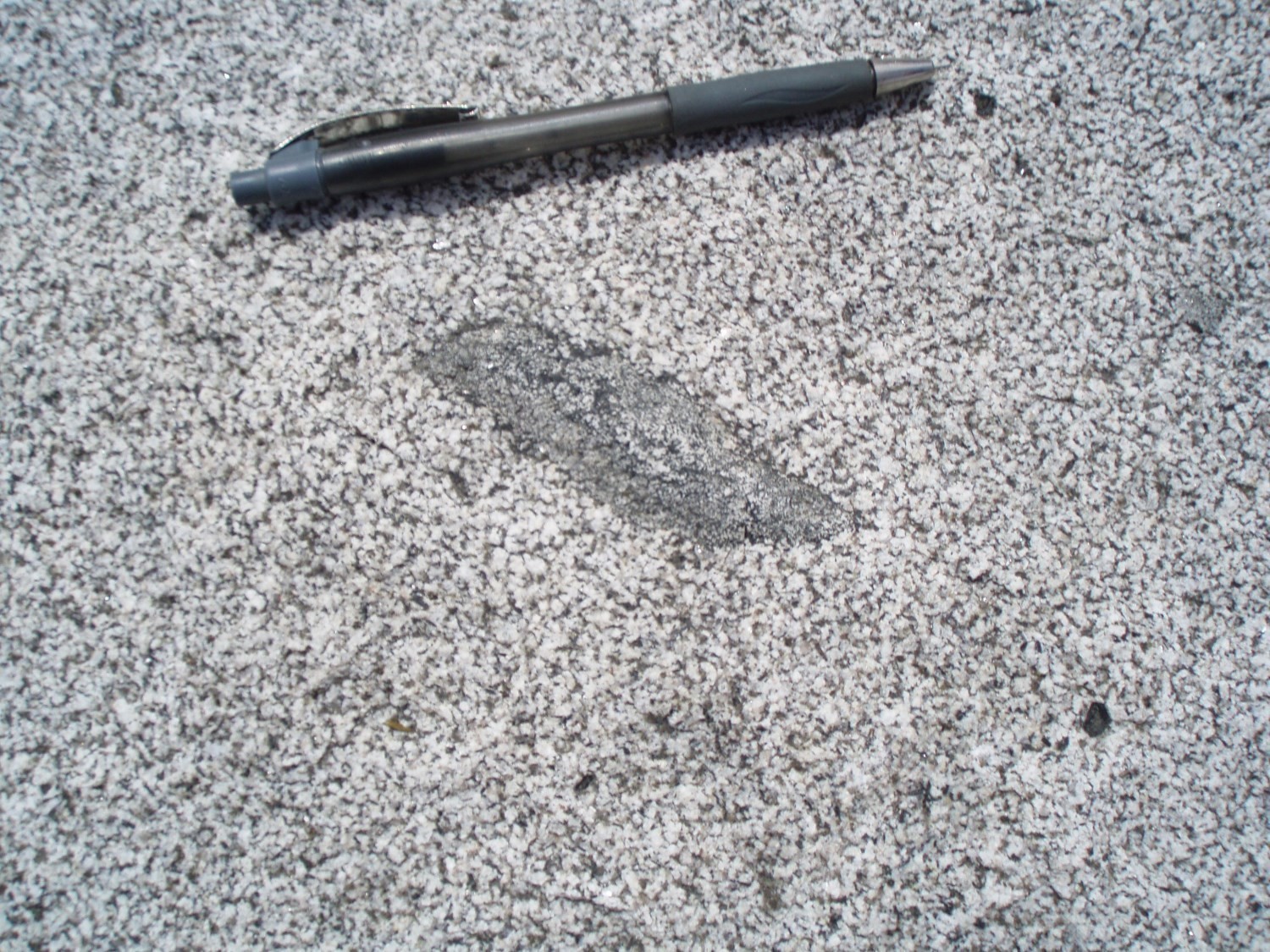 This unit is located in the SE quarter of sheet 32C05. It essentially corresponds to the external intrusive phase of Danis (1985) and Bourne and Danis (1987). It is a typically foliated monzodiorite and quartz monzodiorite unit containing 5-10% hornblende and biotite. Magnetic susceptibility of this rock is commonly less than that of hornblende monzonite (Alac2). This unit is medium grained, but generally less than hornblende monzonite. Contacts are gradual between units Alac3 and Alac5. However, cross-cutting relationships indicate that unit Alac5 is slightly younger (Danis, 1985). 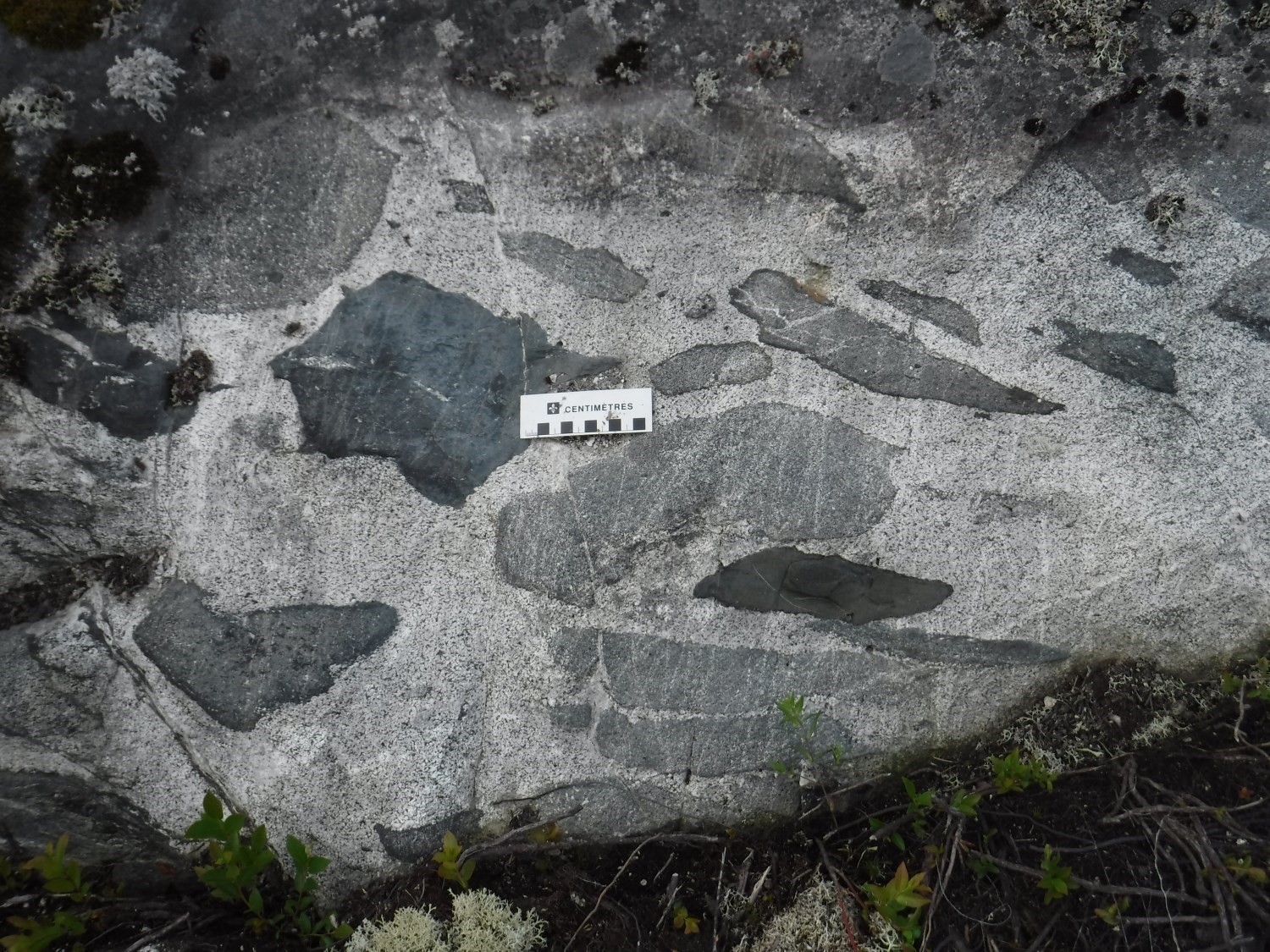 This unit represents the facies commonly observed in the northern half of the batholith, as well as in its southern end. It is a biotite (5-15%) quartz monzonite with 10% hornblende. This rock is weakly foliated to massive in places. Foliated hornblende-rich dioritic enclaves are common (Tremblay, 1950). Mineralization of the Québec Lithium Mine is hosted in this facies, in the NE portion of the La Corne Batholith, as is the Molybdénite Corporation Mine in the SW corner. Unit nAlac2 represents the late phase of the La Corne Batholith. It consists of muscovite ± biotite monzogranite, with garnet locally. This phase is commonly referred to as “two-mica monzogranite” in several studies. Rive et al. (1990) named this particular unit “Chaptes Intrusion”. Rocks are whitish to pinkish, generally homogeneous and fine to coarse grained. These rocks are generally peraluminous. An important feature of this unit is the presence of numerous granitic pegmatite intrusions mineralized in Be, Li, Ta and Mo, hosted in fractures and joints that affect it, or in various immediately adjacent lithologies. The proportion of pegmatitic material is highly variable, reaching up to 80% of the area of some outcrops.

The La Corne Batholith is about 15 km E-W by 22 km N-S. It covers part of sheets 32C05, 32D08 and 32C04. It marks the contact between the Malartic and Kinojévis groups. This batholith is regionally associated with a strong negative magnetic anomaly that cuts regional structural grain. Unit nAlac1 (quartz monzonite and granodiorite) is the largest and occupies the northern half of this batholith. Units nAlac3 (hornblende monzonite) and nAlac5 (monzodiorite and quartz monzodiorite) are found mainly in the southern half and have a concentric arrangement. Units with the highest magnetic susceptibilities are hornblendite (nAlac1) and hornblende monzonite (nAlac3).

The La Corne Batholith consists of two distinct magmatic suites: 1) an early metaluminous dioritic to granodioritic suite containing numerous metasedimentary and metavolcanic rock xenoliths, and 2) a late, moderately to non-foliated, xenolith-free peraluminous monzogranitic suite with a mineralized aureole in Li, Be, Mo and Ta. Recent dating by U-Pb single zircon (Feng and Kerrich, 1991) and multiple zircons (David, 2019) suggest that the monzogranitic suite has intruded from 30 to 40 Ma after the early dioritic-granodioritic suite. This considerable gap in time challenges the magmatic links that may exist between these early and late phases, and instead highlights the importance of telescoping of two large magmatic suites in the same region. The position of the La Corne Batholith enhances the fault contact between the Malartic and Kinojévis groups.