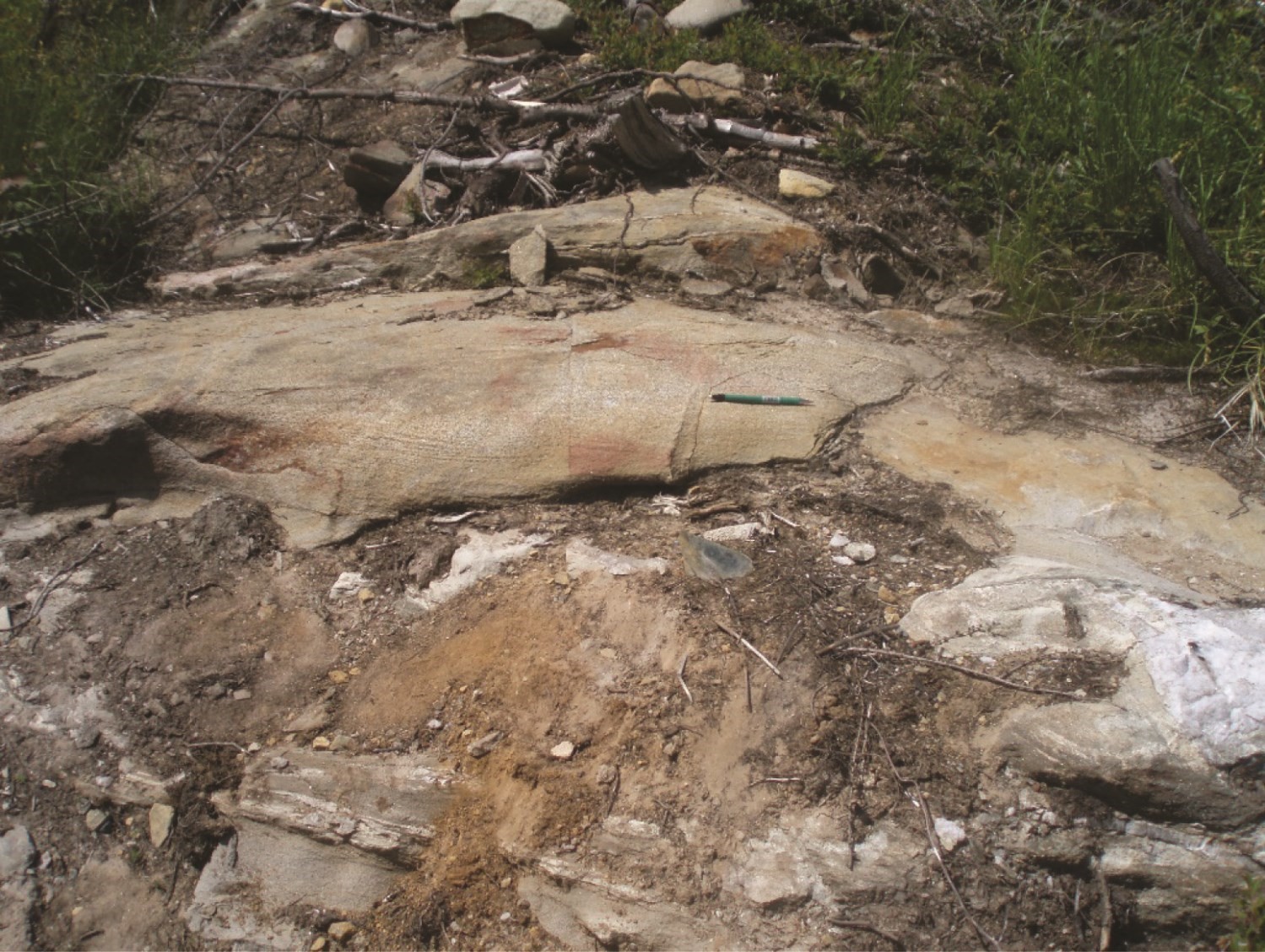 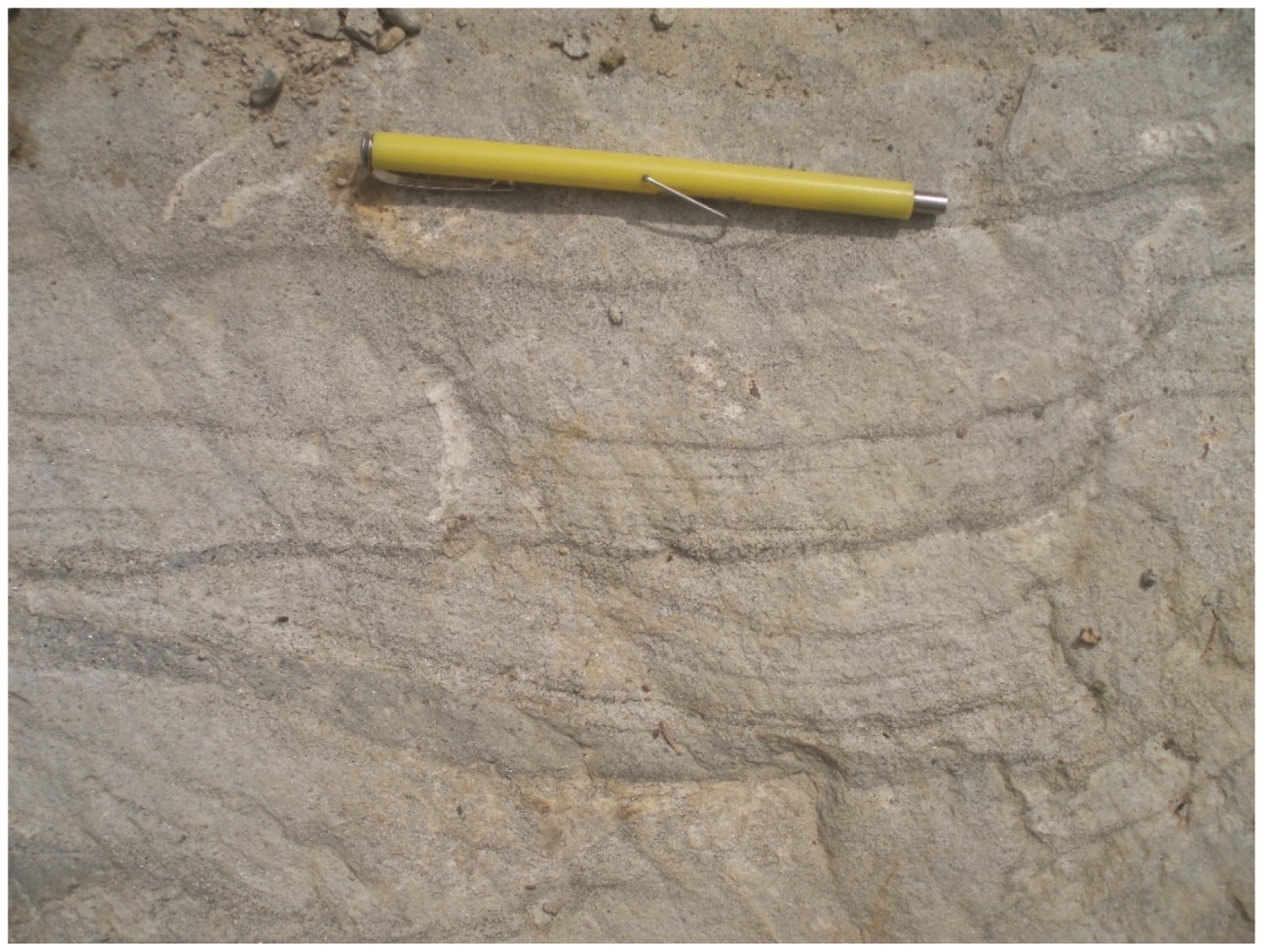 Sedimentary rock units consisting of sandstone, turbiditic and graphitic mudrock, black claystone, polygenetic conglomerate and biotite schist occur as bands or enclaves in intrusive rocks of the La Corne Batholith. The main minerals identified in megascopic samples are quartz and biotite. Feldspars are abundant in places. In these units, around the La Motte and La Corne batholiths, garnet or staurotide porphyroblasts of up to 3 mm in diameter are found in bands dominated by biotite.

Schist foliation has an approximate but fairly constant E-W direction, but it locally follows the La Motte and La Corne batholith edges in a N-S direction. Locally, schist can be intensively folded and shows well-developed drag folds, thin ptygmatitic quartz veinlets and quartz veins and clusters. Quartz veins are commonly parallel to or cut schistosity at a sharp angle. Several veins are boudinaged and folded in complex ways. Generally E-W-orientated bedding can be seen in a few places in sheet 32D08. This bedding has the same dip as schistosity but is locally more abrupt. Stratification and bedding commonly dip 30 to 60° northward. Summits generally appear to be facing southwest (Brett et al., 1976).

Partial assimilation of sedimentary rocks by batholith masses is commonly observed. Such examples of partial assimilation, manifested by migmatization, were observed in sheet 32D08 and in the northern portion of sheet 32C04. Biotite schist then occurs as elongated fine-grained enclaves composed of biotite, quartz and feldspar phenocrystals with fuzzy edges.

There does not appear to be any significant change in the degree of metamorphism of schists near batholiths. Grade varies from amphibolite to upper greenschist away from batholiths. Considering that none of these sedimentary units are more than 1600 m away from batholith contact, it can be assumed that all have undergone approximately the same degree of metamorphism (Brett et al., 1976). Enclaved biotite schists are similar to schists found outside batholiths. A well-defined chilled margin between biotite monzogranite of the La Motte massif and this formation is not observed, except for the presence in several places of staurotide and garnet in these schists.

Sandstone, turbiditic and graphitic mudrock, black claystone and polygenetic conglomerate units average 20 to 30 cm in thickness. They can be found in sheets 32D07, 32D08, 32C05 and 32C04.

This formation is a sedimentary basin bordered by the Manneville Nord Fault, in the north, and the Manneville Sud Fault, in the south. All of La Motte and La Corne batholiths intrude this formation. Volcanic units bordering this formation on the north side (Kinojévis Group, age 2716-2719 Ma) and on the south side (Malartic Group, age 2714-2706 Ma) are 15-25 Ma older than sedimentary rocks, which clearly demonstrates the regional structural importance of border faults.