All tonalites grouped in unit nArot1 are homogeneous, ranging from slightly foliated, tectonically banded, to mylonitic. Biotite is the major ferromagnesian phase. Based on grain size and proportion of ferromagnesian minerals, two phases can be differentiated: 1) a medium-grained leucocratic to mesocratic tonalite phase; and 2) a coarse-grained, locally porphyritic white tonalite and trondhjemite phase that has a higher proportion of mafic enclaves. Grey tonalite is composed of plagioclase, quartz and green to brown biotite locally associated with green hornblende and epidote. In thin sections, ferromagnesian minerals (<40%) define foliation. White tonalite is typically heterogranular and is mainly composed of large plagioclase and quartz grains with small interstitial microcline grains. Ferromagnesian minerals (<15%) are dominated by green to red-brown biotite, locally associated with green hornblende and epidote with allanite core. In both phases, secondary minerals are muscovite, sphene, apatite, zircon and leucoxene. Sericite partially or totally replaces plagioclase grains, while chlorite partially replaces biotite. Opaque minerals, usually trace, consist of pyrite and more sparsely magnetite.

The first phase contains only local enclaves of mafic gneiss or amphibolite. These are decimetric to metric and subrrounded to stretched parallel to foliation. In the second phase, mafic enclaves – gabbroic to dioritic in composition – are more abundant; they locally form strings that are likely derived from dismembered sills or dykes. 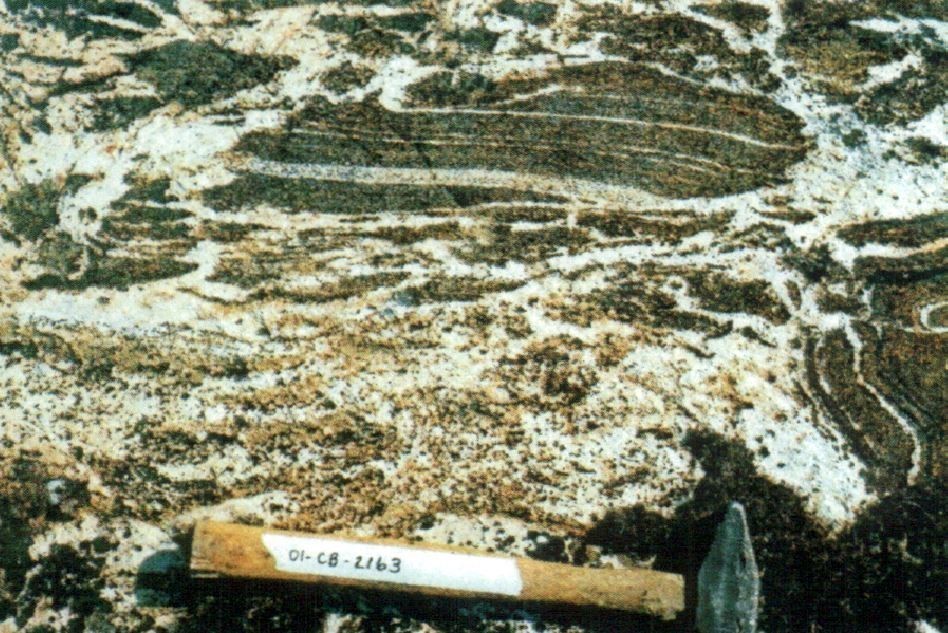 In the Anuc Lake (sheet 34O) and Puvirnituq (sheet 35C) areas, unit nArot2 consists of medium to coarse-grained mesocratic hornblende-rich tonalite, which contains numerous enclaves (<40%) of mafic gneiss and, more locally, ultramafic rocks (Berclaz et al., 2003, 2005; Maurice et al., 2004, 2005a). The many enclaves are stretched and folded in the direction of foliation, giving tonalite a heterogeneous, gneissic appearance. In the Anuc Lake area, this unit forms halos around the different volcano-sedimentary complexes. By moving away from contact with mafic metavolcanic units, the proportion and size of mafic enclaves decrease to thin lenses and hornblende schlierens. These relationships suggest that hornblende tonalite could be the result of disintegration and gradual assimilation of mafic rocks following the injection of tonalitic magma.

Many isolated strips of heterogeneous hornblende tonalite alternate in unit nArot1, but are not visible at the scale of the map. Apart from a greater proportion of hornblende than biotite, microscopic characteristics vary across outcrops and are similar to those observed in the rest of the nArot1 unit. In the most homogeneous facies, hornblende forms phenocrystals with biotite, apatite, sphene and magnetite inclusions. Brown biotite also rims hornblende grains or is intergrown with muscovite. It may contain rutile needles forming a tight mesh. In highly foliated to mylonitic facies, hornblende forms subgrains, or even a neoblastic matrix with plagioclase, quartz and microcline. 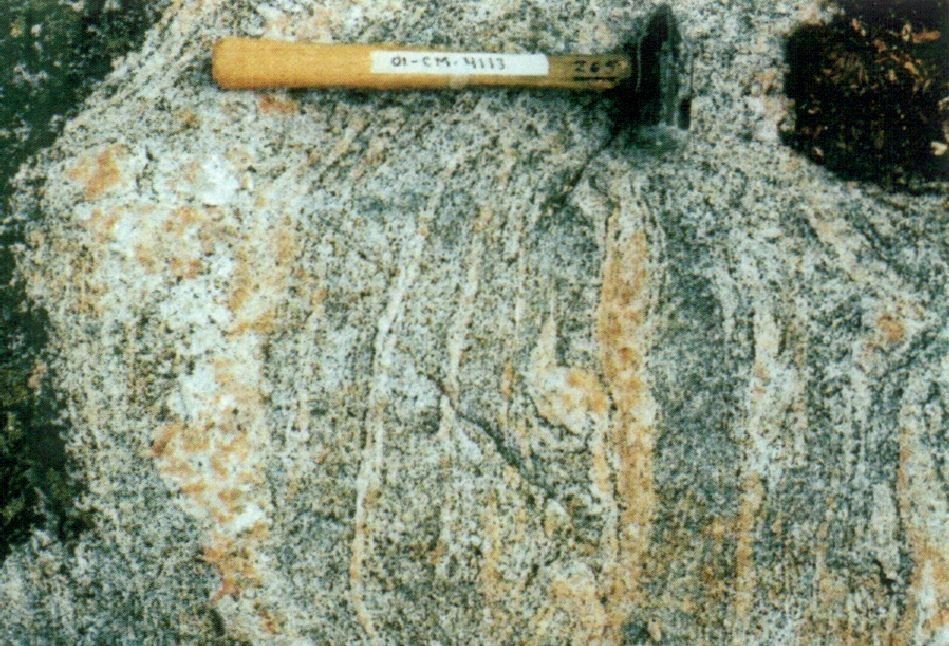 Unit nArot3 differs from the previous two tonalite units by the presence of injections (mass, dyke or vein) of granite material in direct or diffuse contact with the host rock. In the most deformed facies, granite material occurs as decimetric augen clusters or K-feldspar phenocrystals (<10 cm). These granitic bodies are leucocratic to hololeucocratic, medium grained to porphyritic, and the main ferromagnesian mineral observed is biotite. They are similar to later granite and granodiorite units of the La Chevrotière Suite. The unit contains massive to slightly foliated granitic phases, in intrusive and diffuse contact, alternating with augen-textures foliated phases, locally mylonitized, in sharp tectonic contact with tonalites. The absence of a melanocratic interface (melanosome) between granitic and tonalitic phases suggests that granitic bodies represent syn-kinematic injections (La Chevrotière and Pinguq suites) in a tonalitic protolith, equivalent to the unit of homogeneous tonalite (nArot1), rather than metamorphic mobilisates produced during migmatization. In the tonalitic matrix, foliation is commonly marked by muscovite, biotite and epidote. Muscovite forms phenocrystals and neoblasts around plagioclase and biotite.

The Rochefort Suite is located in the NW part of the Minto Subprovince. It covers nine sheets (34I, 34J, 34N, 34O, 34P, 35B, 35C, 35F, 35G) along a general NNW-SSE orientation. The homogeneous biotite tonalite unit (nArot1) is predominant, while the granitized tonalite unit (nArot3) is secondary and discontinuous throughout the suite. Finally, the heterogeneous hornblende unit (nArot2) forms smaller masses a few kilometres to about 50 km in the Anuc Lake (sheet 34O) and Puvirnituq (sheet 35C) areas.

Ages obtained for the Rochefort Suite (between 2789 Ma and 2755 Ma) correspond to a major magmatic event in the NE Superior Province that led to the development of large tonalitic units (Rochefort, Kapijuq and Faribault-Thury suites) between 2800 Ma and 2760 Ma (Simard et al., 2008). A few tonalites, previously included in the Rochefort Suite, indicated ages of 2834 Ma, 2810 Ma and 2799 Ma. These are located in the Duquet (2828-2822 Ma) and Qalluviartuuq-Payne (2850-2830 Ma) volcano-sedimentary complexes, and are interpreted as originating from tonalitic magmatism associated with volcanism of these two complexes (Simard et al., 2008).