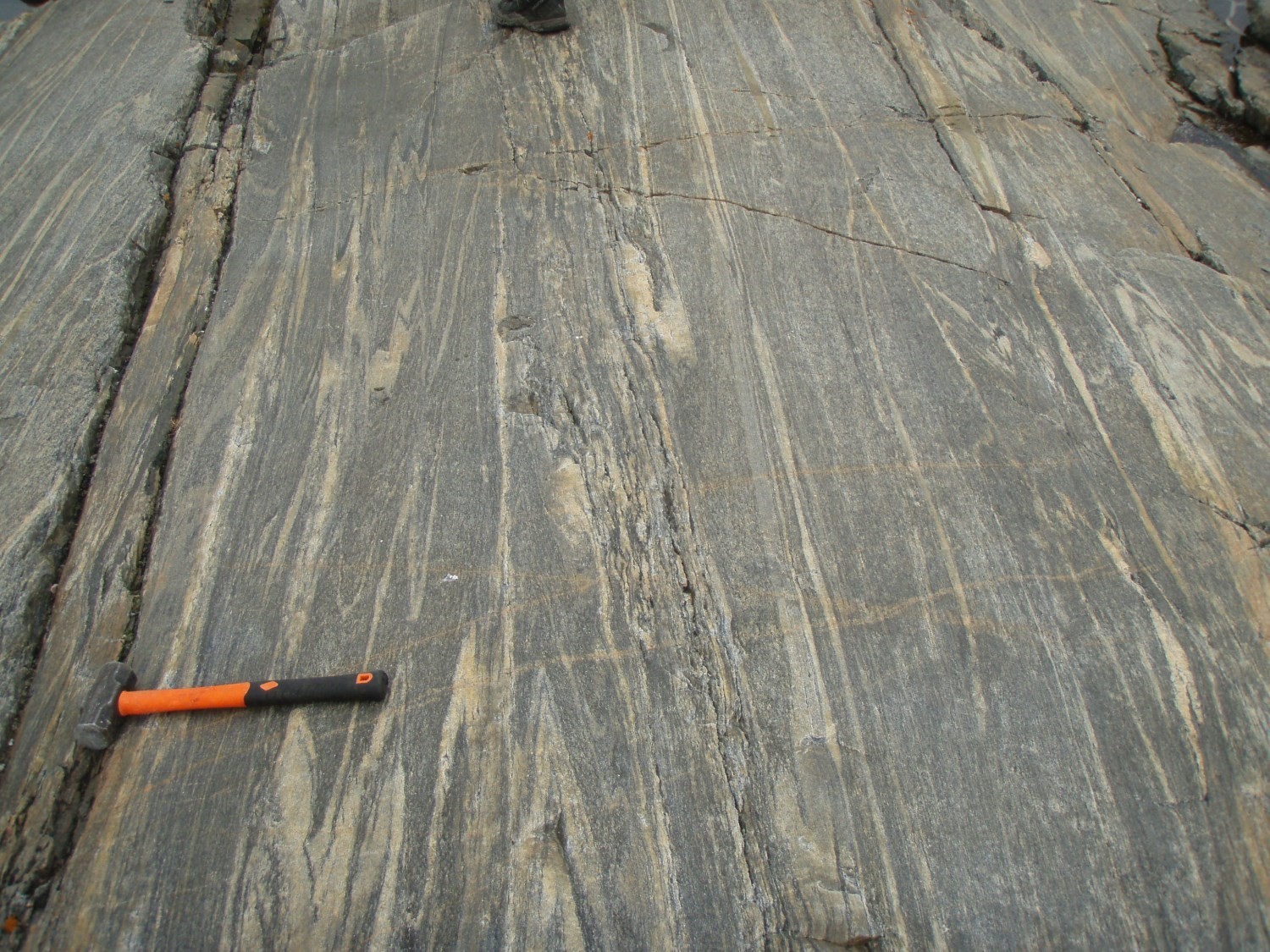 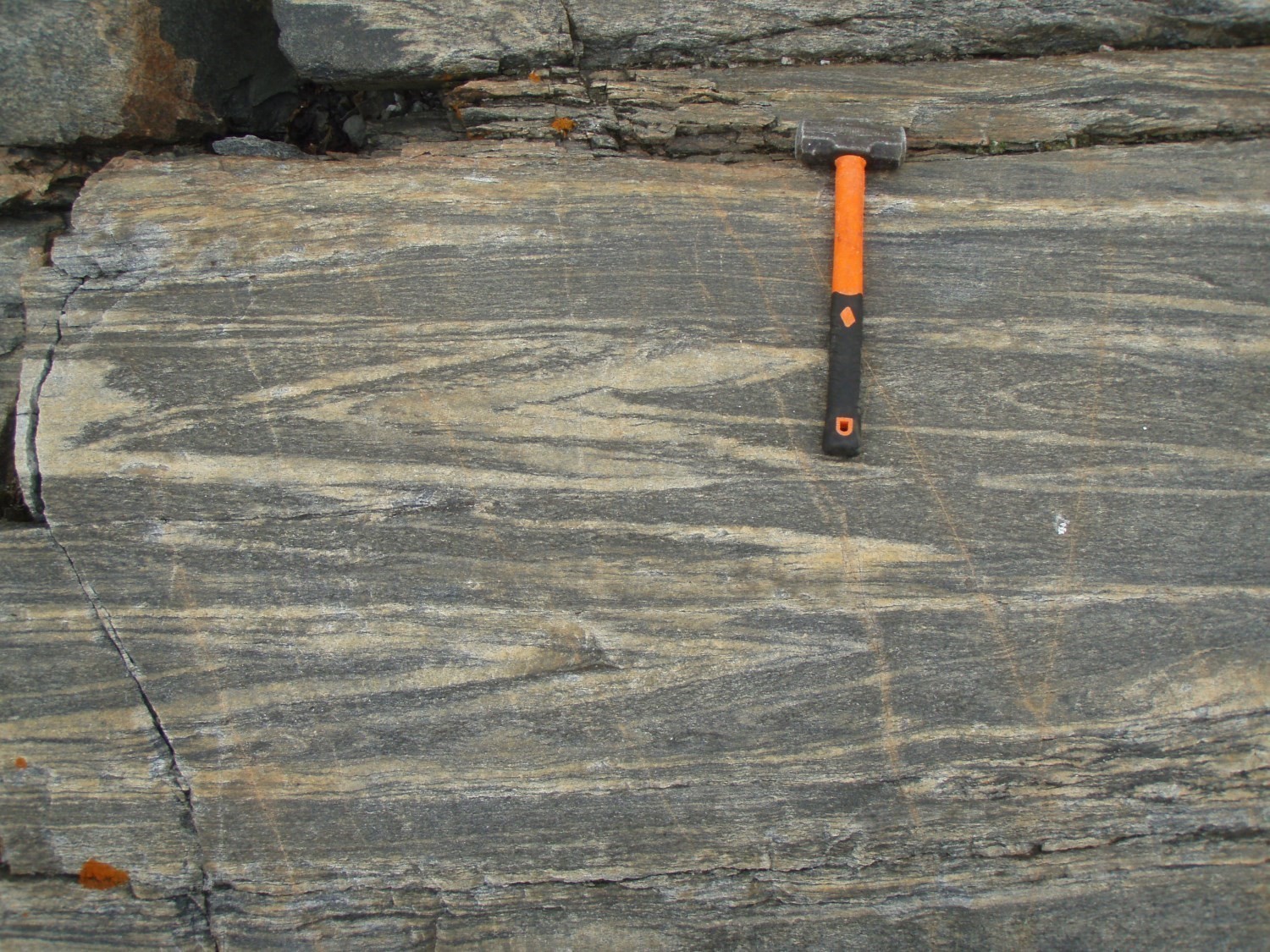 The Faribault-Thury Suite corresponds to an Archean suite of the “TTG” type (Madore et al., 1999; Ridley and Kramers,1990; Martin, 1994; Rudnick, 1995; Berger and Rollinson, 1997). It consists mainly of foliated to gneissic tonalite and, in smaller proportions, of trondhjemite, diorite and granodiorite (nAfth1). A large proportion of these rocks have undergone migmatisation at varying degrees of partial melting, which is evidenced by the presence of 5 to 50% tondhjemitic to granitic mobilisate. This mobilisate is in the form of centimetric to decametric discontinuous bands (or horizons), parallel or secant to regional foliation. Decimetric to decametric enclaves of intrusive rocks (ranging from gabbro to tonalite) and supracrustal rocks (amphibolite and paragneiss of the Arnaud Complex) account for 1 to 25% of outcropping surfaces.

This tonalite is petrographically similar to that of the nAfth1 unit, but is distinguished by the abundance of mafic and ultramafic enclaves (Madore and Larbi, 2000; Madore et al., 2001; St-Onge and Lucas, 1997a, 1997b).

Trondhjemite is petrographically similar to tonalite of the nAfth1 unit, but distinguishes itself by its content in ferromagnesic minerals of less than 10%.

The Faribault-Thury Suite occupies most of the Douglas-Harbour Domain, the northeast segment of the Minto Subprovince. It is located in an area that extends approximately 300 km north-south and 150 km east-west. It is mainly contained in sheets 24M and 25D and, in smaller parts, in sheets 24L, 34P, 35A, 35H, 25E and 25C. Specifically, the gneissic tonalite with mafic enclaves subunit (nAfth1a) is located primarily in the vicinity of the village of Kangiqsujuaq in sheets 35H09 and 25E12. The trondhjemite subunit (nAfth1b) is located primarily in the Douglas Harbour Domain’s western portion in sheet 34P.

The Faribault-Thury Suite occupies the Douglas Harbour Domain’s western edge. At this location, it is in contact with the Lepelle Domain in the northwest and the Utsalik Domain in the southwest. The nature of contacts is tectonic in a few places, where there are regional faults of undetermined movement separating these domains. At its eastern limit, the Faribault-Thury Suite is also in tectonic contact with the Diana Structural Complex, a unit of tectonically reworked Archean rocks strongly affected by Proterozoic deformation (Madore and Larbi, 2000). Its contact is marked by dextral kinematic deformation corridors.

The Faribault-Thury Suite is also in contact with the volcano-sedimentary Proterozoic sequences of the Labrador Trough in its eastern part and the Ungava Trough in its northern limit. Some parts of the Labrador Trough are bounded by a thrust zone (Madore et al., 2001; Bouchard et al., 1999), while others unconformably lie on Archean units (Bilodeau and Caron-Côté, 2018). The Ungava Trough is in tectonic contact with the Faribault-Thury Suite (Madore et al., 2001; St-Onge et al., 1988; St-Onge and Lucas, 1990c).

The Faribault-Thury Suite is in contact with the Trojan, Qimussinguat and Arnaud complexes, and the Leridon Suite. In some places, it is tectonically separated from the Trojan and Qimussinguat complexes by areas of intense ductile deformation (Madore et al., 1999). Tonalites also contain several kilometre-sized klippes of the Arnaud Complex. Field relationships show that tonalite intrudes these klippes of supracrustal rocks (Bilodeau and Caron-Côté, 2018). Some observations suggest that the Arnaud Complex klippes overthrust the Faribault-Thury Suite (Madore et al., 1999). Tonalites are cut by granitic and monzonitic intrusive rocks of the Leridon Suite (nAlrd) and by two families of Proterozoic dykes, the Klotz Dykes (pPktz) and the Rivière Payne Dykes (pPpay).