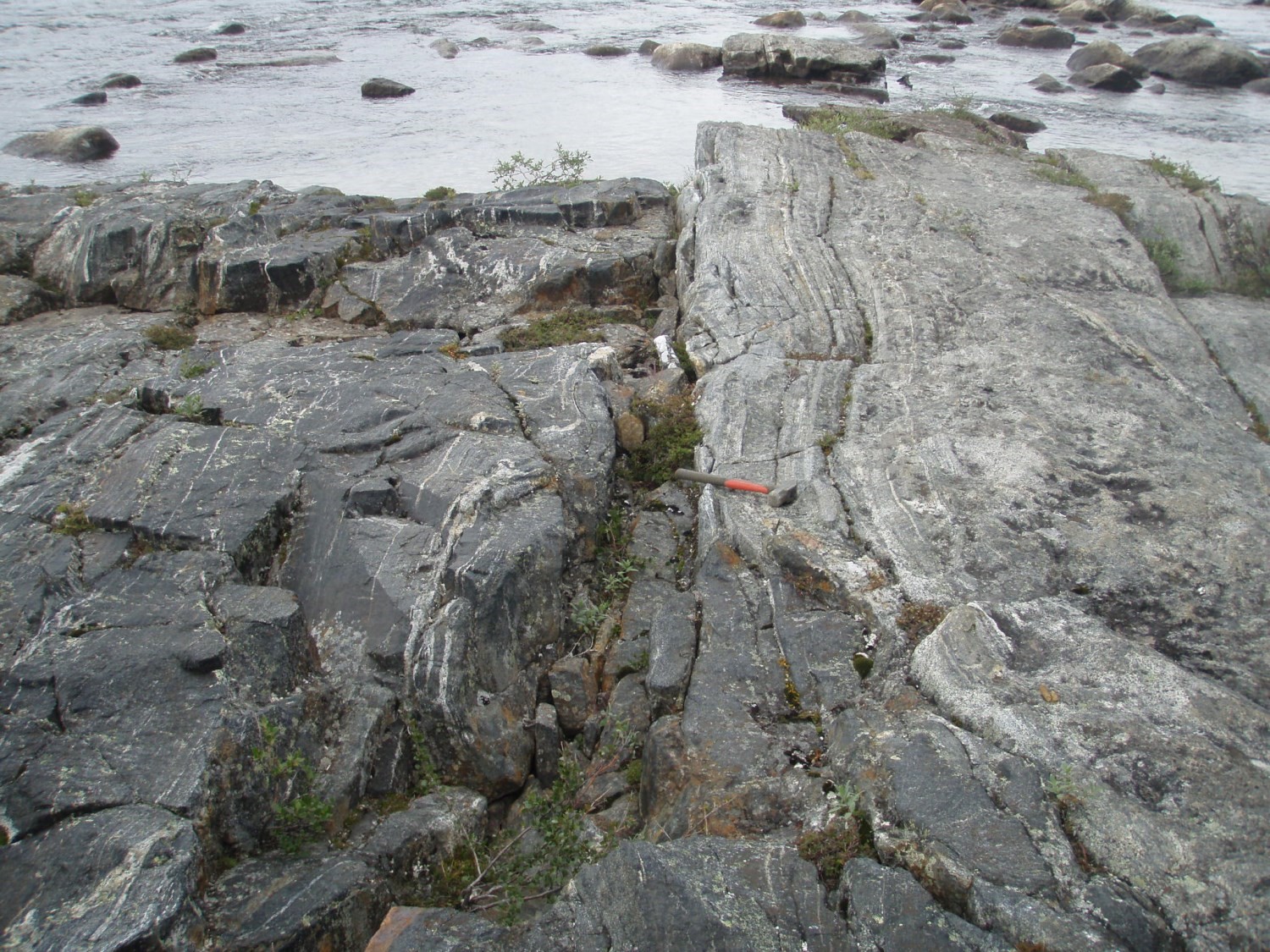 The Douglas-Harbour Domain volcano-sedimentary rocks were recognized by Madore et al. (1999) in the Peters Lake area southwest of Kangirsuk. They were initially included in the Faribault-Thury (renamed Faribault-Thury Suite), Troie and Qimussinguat complexes (Madore and Larbi, 2000; Madore et al., 1999, 2001; Cadieux et al., 2002; Leclair et al., 2000, 2003). All of these volcano-sedimentary rocks were reassigned to the Arnaud Complex, introduced by Simard et al. (2008) to harmonize the stratigraphy of the northeast Minto Subprovince.

Names have been given to the klippes with the largest areas: Curotte, Faribault, Gorribon, Hamelin, Peters-Ouest, River, Tasiaalujjuaq, and Thury belts in the Peters Lake area (NTS sheet 24M; Madore et al., 1999), Buet and Trempe belts in the Arnaud River area (sheet 25D; Madore and Larbi, 2000) and Kimber Belt in the Klotz Lake area (sheet 35A; Madore et al., 2001). The most recent mapping of the Trempe, Thury and Gorribon belts (Bilodeau and Caron-Côté, 2018) has resulted in significant changes to the boundaries of the first two and significant segmentation of the Gorribon Belt.

The Arnaud Complex is made up of supracrustal rocks, dominated by mafic volcanics, and contains a lower proportion of ultramafic intrusions. This complex is subdivided into five (5) informal units: 1) ultramafic rocks (metavolcanics or sills) (mAarn1); 2) amphibolite and mafic gneiss (mAarn2); 3) dacite and rhyodacite (mAarn3); 4) iron formation unit (mAarn4); and 5) paragneiss, diatxite, quartzite, marble and calc-silicate rocks (mAarn5). The Arnaud Complex’s rocks, which are hosted by the Faribault-Thury Suite, are usually metamorphosed to amphibolite facies, while rocks of the Troie and Qimussinguat complexes are metamorphosed to granulite facies. 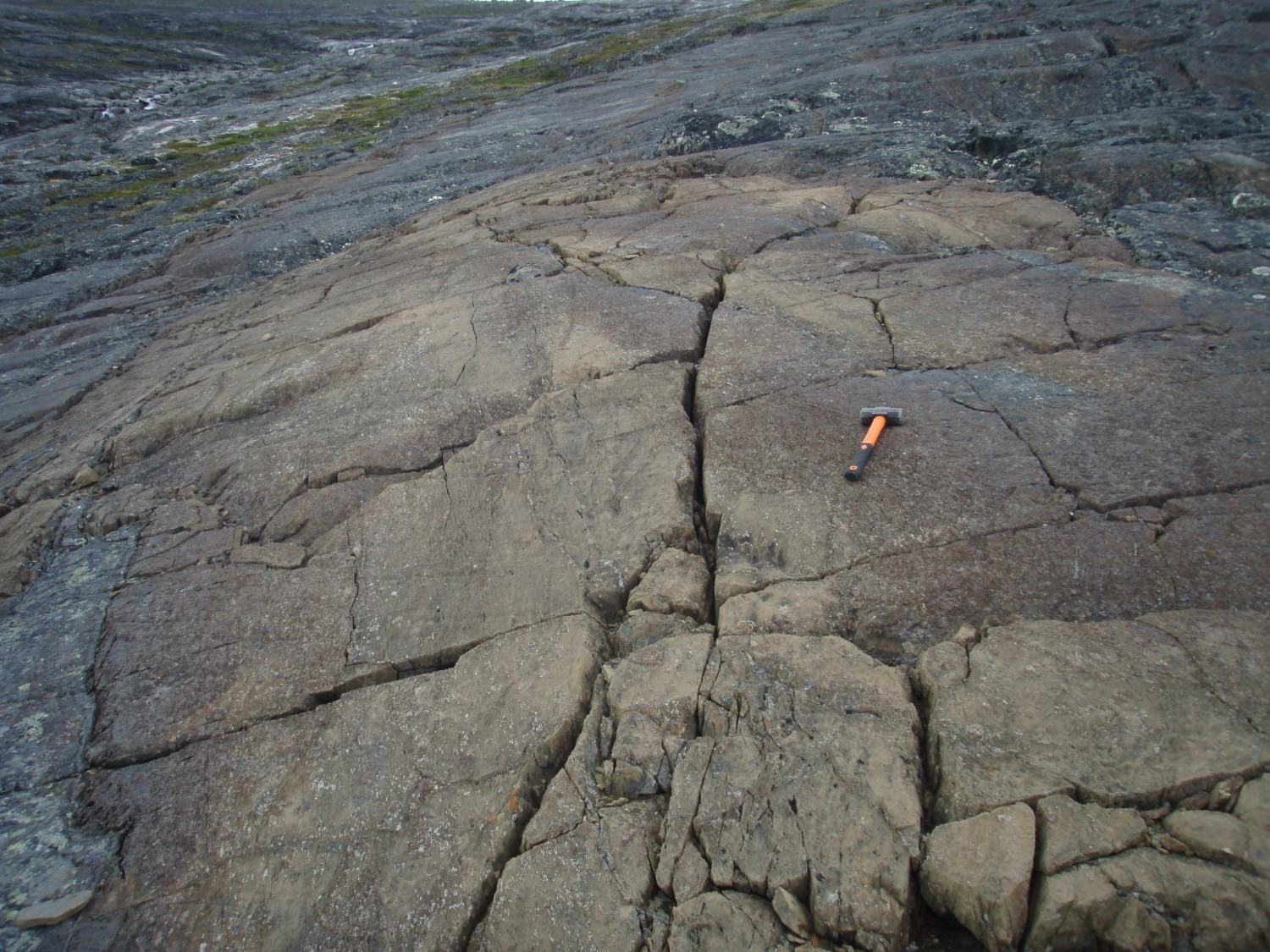 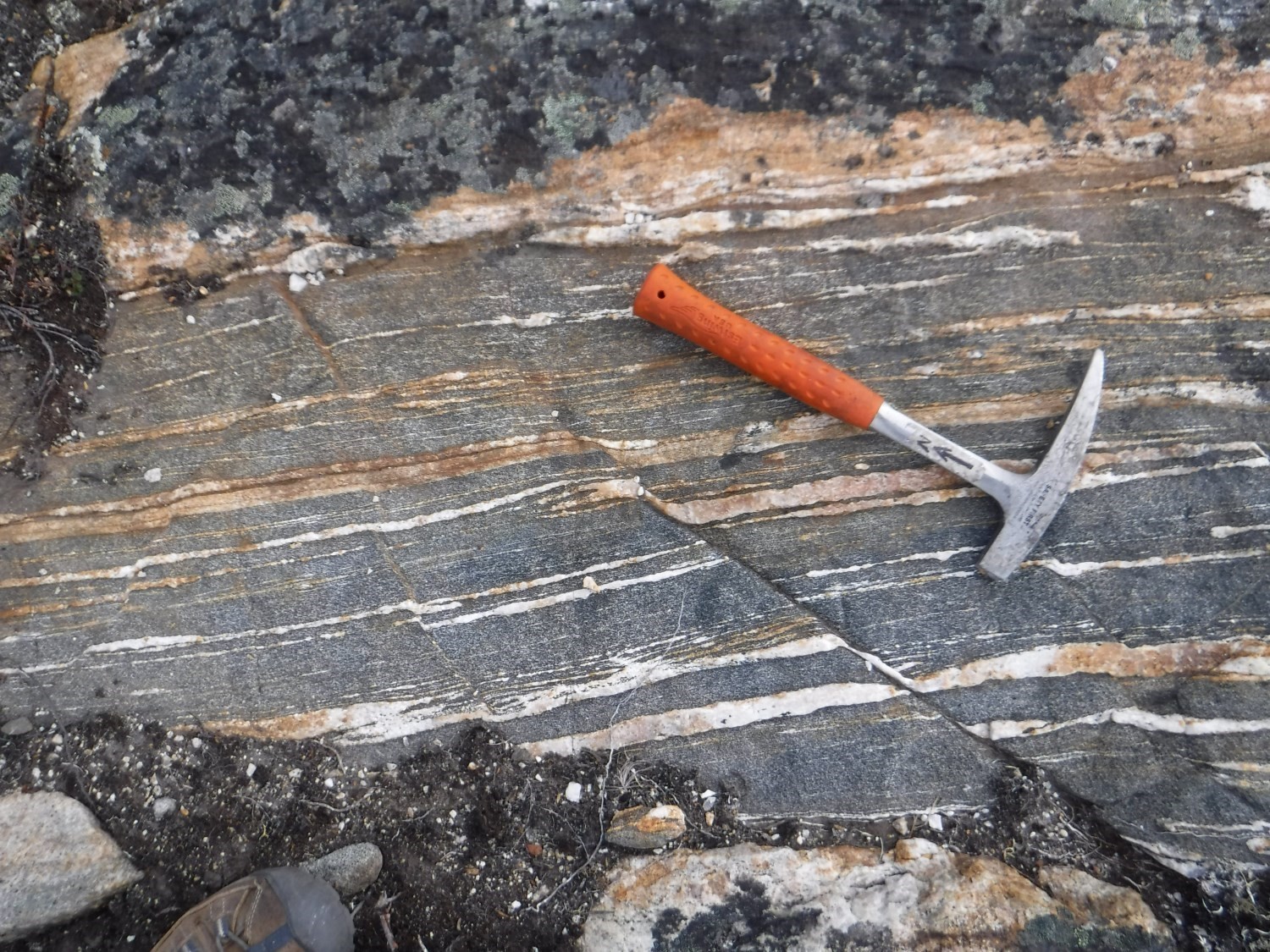 This unit consists of mafic to locally intermediate amphibolite and mafic gneiss. These rocks are interbedded in several locations with other units of the Arnaud Complex, which are presented in the form of decimetric to decametric paragneiss, marble and iron formation horizons. Rocks are generally fine to medium grained and have a granoblastic texture. Amphibolite has penetrative foliation, a nematoblastic texture, and millimetric banding, while mafic gneiss has centimetric compositional banding. It is locally migmatized, cut by veins, and contains clusters of granitic and tonalitic material (Madore et al., 2001).

Madore et al. (1999) locally observed massive in appearance rocks and primary volcanic structures, such as pillows, as well as crystal, lapilli and block tuffs facies in the belts hosted in the Faribault-Thury Suite. Grain size, heterogeneity, and relationship to host rocks were also used as criteria for distinguishing metavolcanics from metagabbros (Madore et al., 1999, 2001; Madore and Larbi, 2000). 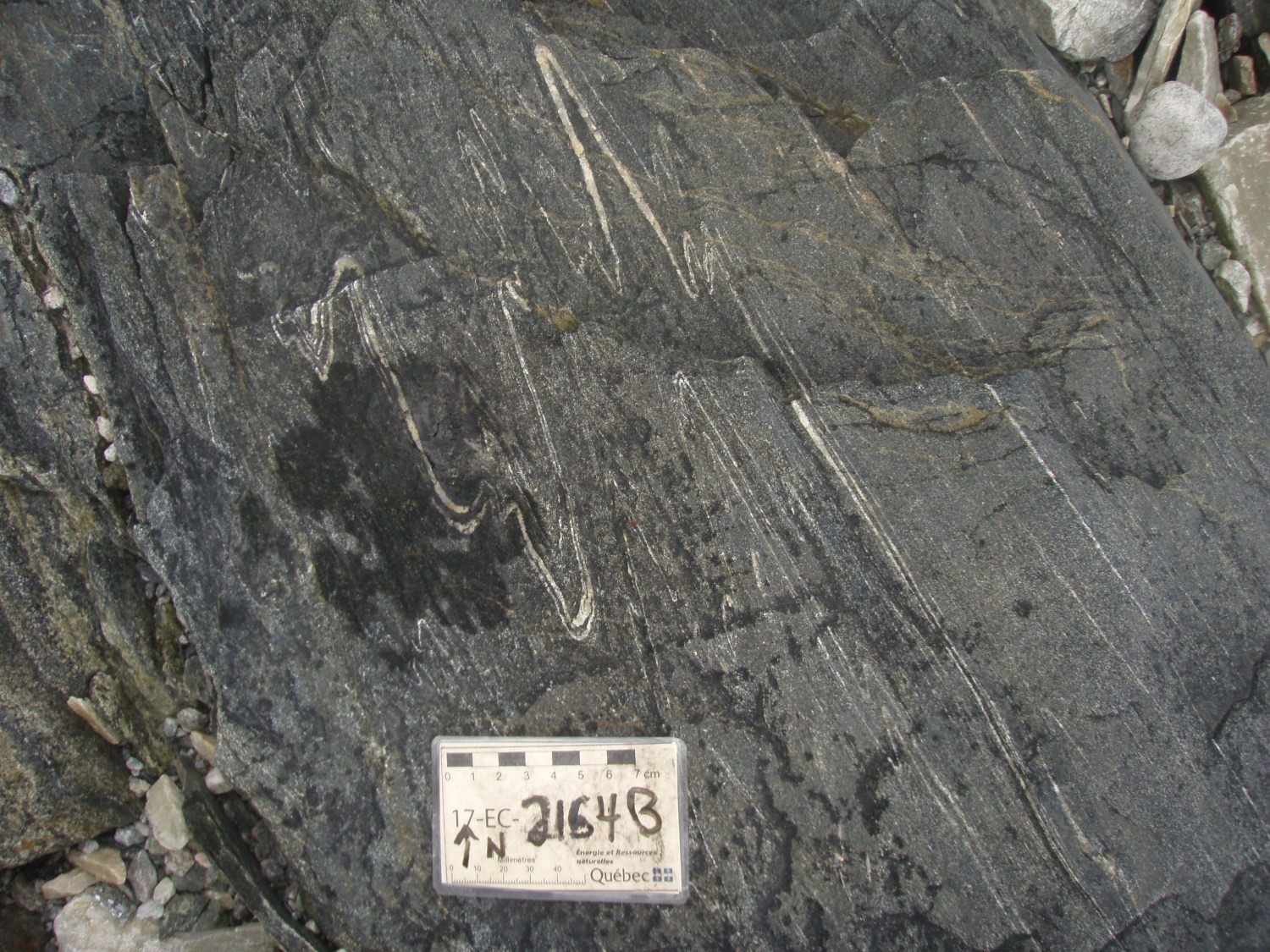 According to Cadieux et al. (2002), “felsic volcanics are leucocratic, white to light grey. These rocks are foliated to mylonitic and generally show good lineation. They are homogeneous, fine grained and contain quartz (rhyodacite) and/or plagioclase (dacite) phenocrystals. Their general composition includes quartz, plagioclase, biotite, muscovite and sericite. They contain rusty zones containing up to 5% disseminated pyrite.” 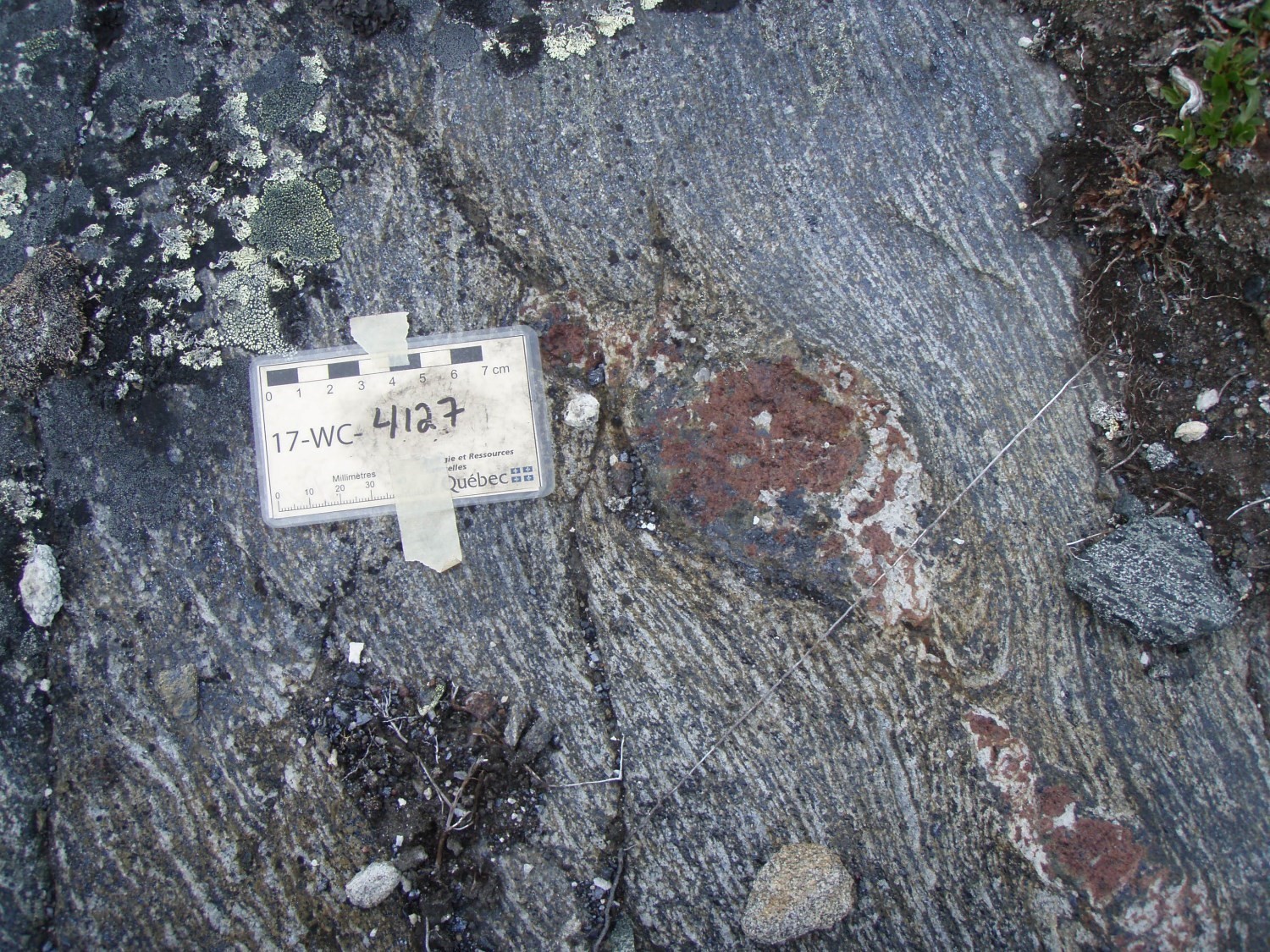 Iron formation occurs in the form of metric to decametric horizons and can reach hectometric thickness in some locations. It is usually interstratified with paragneiss, quartzite or metavolcanics. It is observed in contact with orthogneiss and intrusive rocks (Madore et al., 1999). Iron formation is banded, marked by alternating millimetric to centimetric bands of the oxide and silicate facies, and is generally deformed and folded.

Iron formation is metamorphosed to amphibolite facies when hosted in tonalitic gneiss of the Faribault-Thury Suite. The silicate facies consists mainly of quartz, garnet, locally grunerite, and contains smaller amounts of magnetite, hornblende, biotite, calcite and pyrite, as well as traces of apatite and zircon. The oxide facies consists mainly of quartz and magnetite, as well as some minor phases such as grunerite, garnet and apatite.

Klippes included in the Troie and Qimussinguat complexes have a granulite facies paragenesis. The silicate facies consists mainly of quartz and garnet. Orthopyroxene and clinopyroxene are present in places and appear to be the result of grunerite replacement. Pyroxenes are locally replaced by hornblende. Minor phases are dominated by fine-grained magnetite and porphyroblastic biotite. The oxide facies consists mainly of quartz, magnetite and contains, more locally and in smaller proportions, clinopyroxene partially replaced by hornblende, biotite and apatite (Madore et al., 1999). 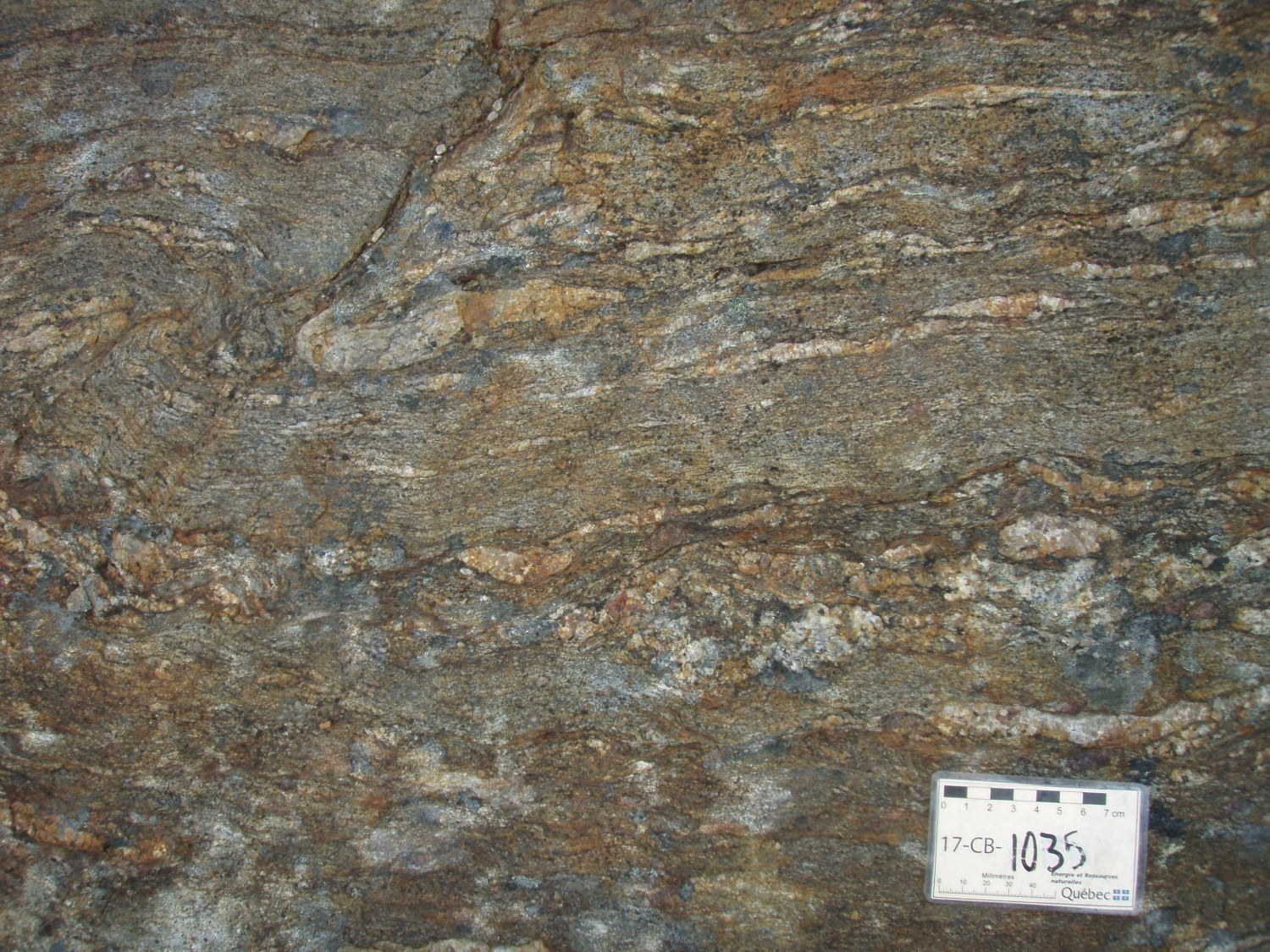 This unit is dominated by paragneiss, which is interbedded with lower proportions of quartzite, diatexite, marble and calc-silicate rock horizons. Klippes hosted in the Faribault-Thury Suite have lateral extensions of a few kilometres, while those within the Qimussinguat and Troie complexes are only observed very locally and have hectometric lateral extensions (Madore et al., 1999).

Paragneiss is essentially hosted by the Faribault-Thury Suite, and is the predominant lithology of this unit. It is slightly migmatitized and shows tectono-metamorphic banding. It is composed mainly of quartz, plagioclase, biotite and garnet. It is usually fine to medium grained, has biotite-marked lepidoblastic foliation and a granoblastic quartzofeldspathic matrix. Accessory minerals are hornblende, sillimanite, graphite, muscovite, rutile and tourmaline. Biotite is locally chloritized and garnet is commonly porphyroblastic and poikilitic, containing inclusions of biotite, sillimanite, quartz, plagioclase or graphite.

Quartzite consists of fine to medium-grained granoblastic quartz. It has massive to laminated textures and has a saccharoidal appearance. Accessory mineral phases are garnet, biotite, muscovite, magnetite, sillimanite and pyrite.

Calc-silicate rocks were only observed very locally. They have a granoblastic texture and fine to medium grain size. These rocks have millimetric tectono-metamorphic banding where each band contains varying proportions of diopside, calcite, scapolite, sphene, quartz, plagioclase and hornblende (Madore et al., 1999).

The Arnaud Complex consists of volcano-sedimentary rock klippes in the Douglas Harbour Domain, the northeastern part of the Minto Subprovince. These klippes are scattered throughout the Faribault-Thury Suite as well as the Troie and Qimusinguat complexes. They are included in an area extending approximately 300 km in a north-south direction and 150 m in an east-west direction, primarily in sheets 24M and 25D and, in a lesser part, in NTS sheets 24L, 34P, 35A, 35H and 25E. The majority of the known klippes are hosted in the Faribault-Thury Suite, between the Troie and Qimussinguat complexes, west of the Troie Complex. They are generally 50 m to 5 km thick and 1 to 20 km long.

The Arnaud Complex is found only in the form of kilometric enclaves or klippes hosted in tonalitic rocks of the Faribault-Thury Suite and in the Troie and Qimussinguat complexes. Finally, it is noted locally that the Klotz and Payne River Paleoproterozoic dykes cut all these Archean rocks, including the Arnaud Complex.