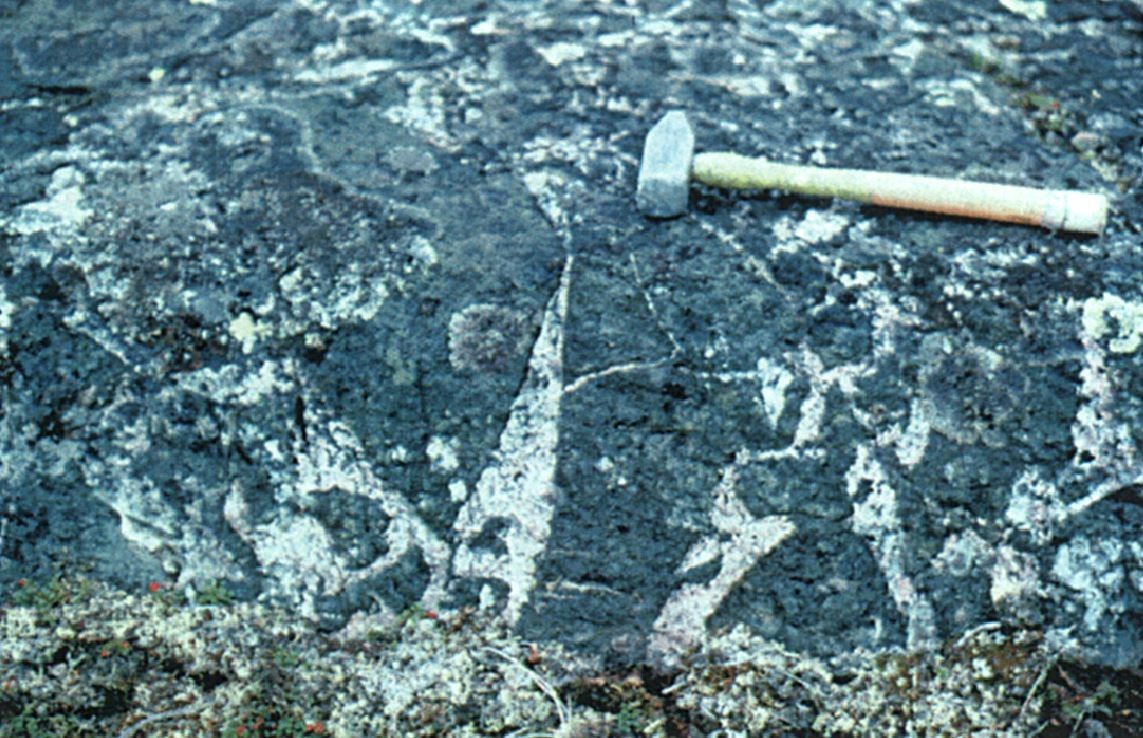 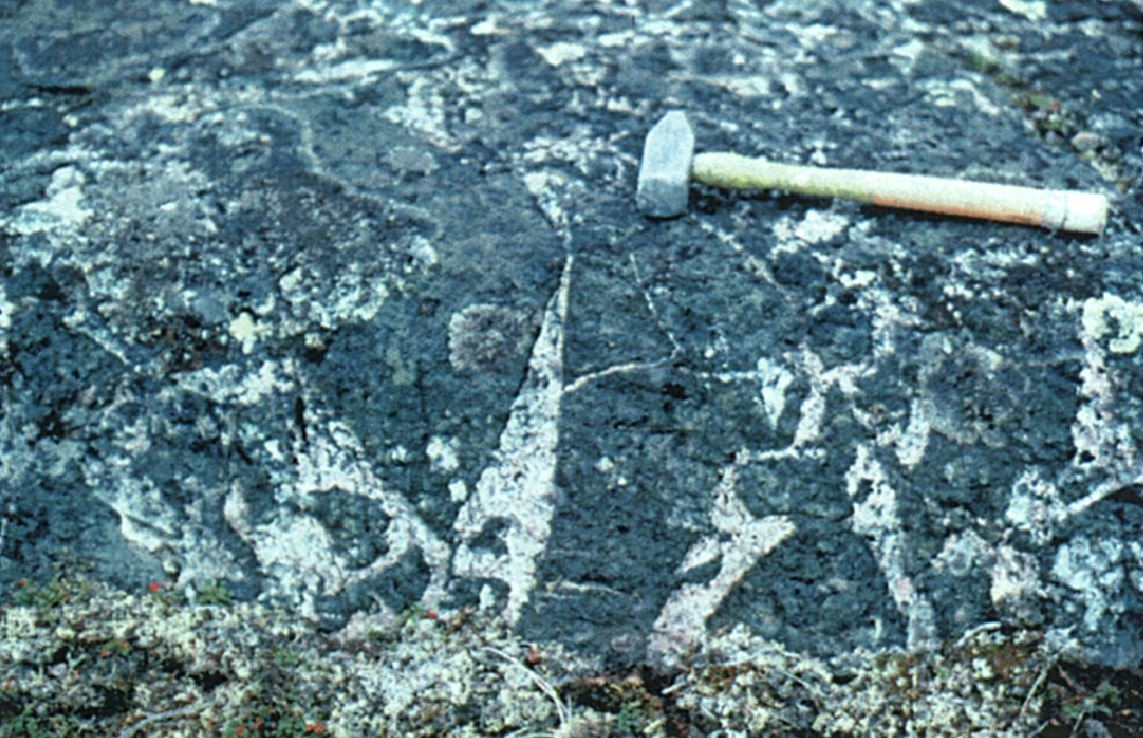 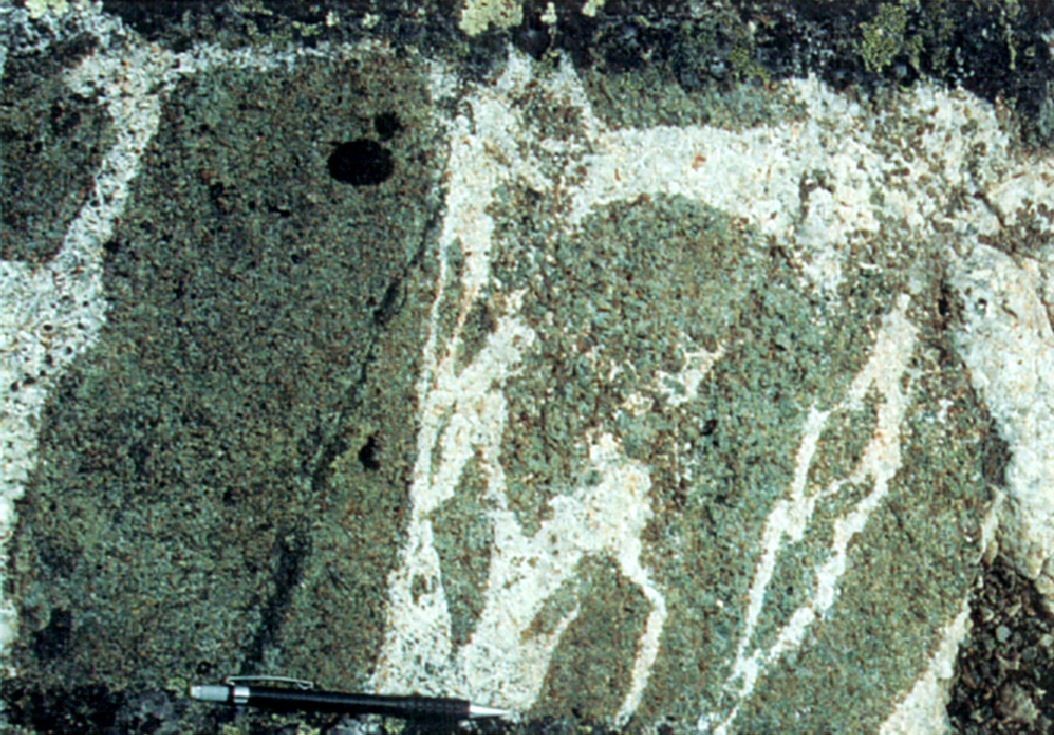 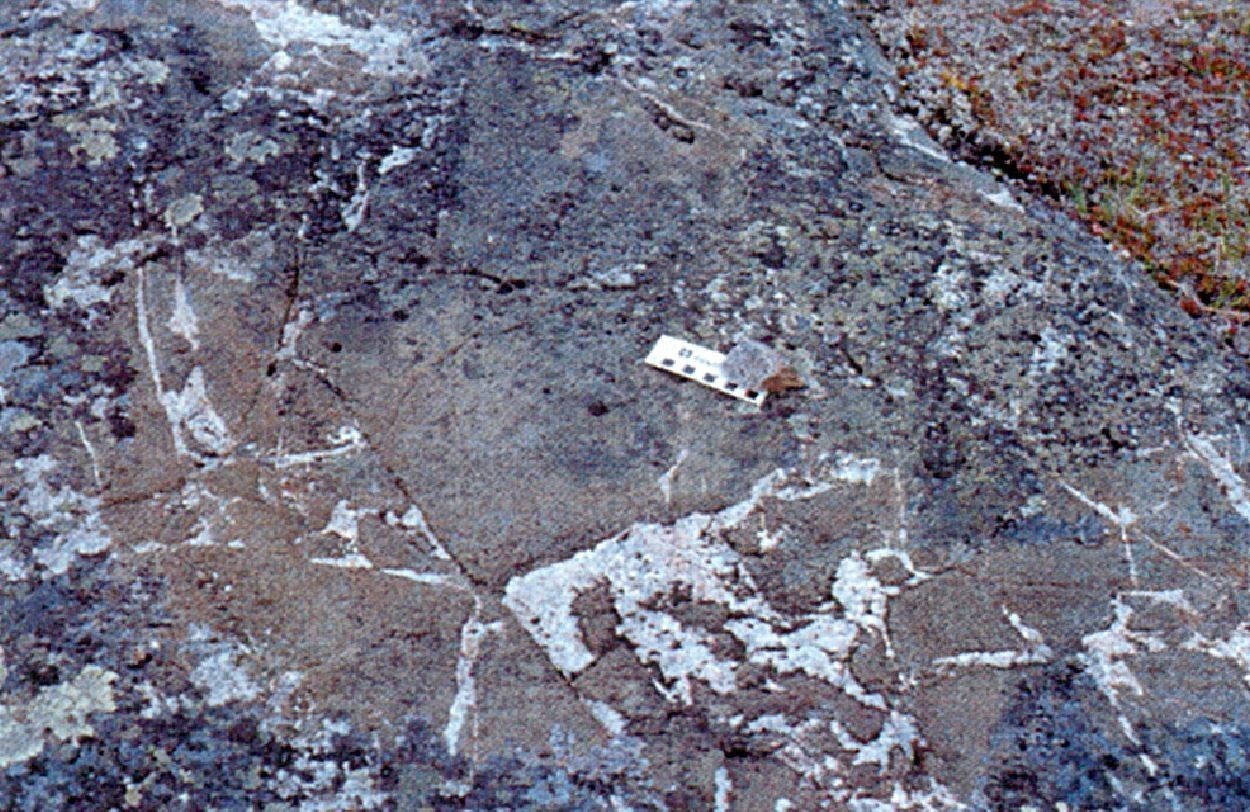 Ultramafic intrusions consist of pyroxenite, hornblendite and locally peridotite. Rocks are dark green or blackish grey, and their alterated surface is brownish grey to dark brown. They are homogeneous, massive and fine to coarse grained. Primary textures are well preserved and cumulative textures are common.

In thin sections, pyroxenite is composed of pyroxenes (50-85%), green hornblende (10-40%) and interstitial plagioclase (<5%). Clinopyroxene and orthopyroxene are in varying proportions, but clinopyroxene is predominant. Orthopyroxene is fresh or slightly altered to serpentine and talc. Clinopyroxene is partially or completely replaced by green hornblende and more rarely by another, lighter fibrous amphibole, probably of the tremolite-actinolite family. Hornblende also occurs as anhedral grains between pyroxene grains, or as centimetric poikilitic crystals containing clinopyroxene and orthopyroxene inclusions. The rock contains a few reddish biotite or phlogopite flakes. Magnetite generally represents up to 1% of the rock, but can reach 5% in samples containing olivine.

Hornblendite is heterogranular and contains mainly green hornblende; some poikilitic crystals are centimetre sized. It also contains clinopyroxene (<10%) partially replaced by green hornblende, some brown biotite (<5%) partially to highly chloritized, and a small amount of interstitial plagioclase (<5%). Orthopyroxene, highly to completely altered to talc, serpentine, carbonate, chlorite and magnetite is observed locally. Magnetite and pyrite are the main accessory minerals. Zircon is found in minor amounts.

Peridotite contains >40% olive crystals in a predominantly clinopyroxene matrix. Some magnetite is usually associated with olivine. Olivine occurs as subrounded grains and inclusions in pyroxense. It is generally well preserved, locally fractured and very slightly altered to iddingsite.

Unit Aluk1 also includes massive gabbro and gabbronorite similar in appearance to those of unit nAluk2, in sharp or gradual contact with ultramafic rocks, such that some of these plutons could represent mafic to ultramafic differentiated intrusions.

Ultramafic (and mafic) rocks of unit nAluk1 are particularly interesting because they contain some Ni-Cu-EGP ± Co mineralized zones that were discovered following the discovery of the Qullinaaraaluk zone (Labbé et al., 2000; Baker and Constantin, 2003; Labbé, 2005), in particular the Tan, MP-1008, Flipper and Ni-dance mineralized zones. Magmatic mineralization occurs as massive, semi-massive and disseminated sulphides associated with an ultramafic intrusion.

Mafic intrusions consist of leucocratic to melanocratic gabbro and gabbronorite, medium to coarse-grained and massive in appearance. The rock is greenish grey to blackish grey, locally bluish, with a brownish grey, greenish grey or whitish grey altered surface.

Gabbronorite is composed of plagioclase (40-60%), orthopyroxene (15-20%), clinopyroxene (15-30%) and green hornblende (5-30%). Ferromagnesian minerals are similar to those found in ultramafic rocks and are generally concentrated in clusters. In between, there are agglomerations of euhedral to subhedral unaltered plagioclase grains. Biotite and magnetite occur in minor amounts. A gabbronorite sample cut by a late fault displays complete plagioclase saussuritization and complete clinopyroxene uralitization. The petrographic heterogeneity of mafic rocks indicates that the Qullinaaraaluk Suite may contain mafic intrusions from different magmatic events. This is supported by geochemical differences (Chevé, 2005) and geochronological differences (David, 2012) observed in rocks of this suite.

From a geochemical perspective, mafic rocks have typical geochemical characteristics associated with Neoarchean gabbroic plutons of the Superior Province (Minto Subprovince) (Boily et al., 2006). The geochemistry of major elements indicates affiliation to a magmatic series of tholeiitic affinity (Chevé, 2005; Boily et al., 2006). However, not all gabbros exhibit the same characteristics when minor and trace elements are considered (Chevé, 2005). According to Boily et al. (2006), although it is unlikely that all gabbros-gabbronorites are cogenetic, variations in the Zr/Y ratio and Mg number (Mg#) indicate a general evolution controlled by a “gabbroic fractionation” mechanism.

The Qullinaaraaluk Suite consists of small intrusions generally <1 km in diameter and covering nine sheets (33O, 34B, 34C, 34F, 34G, 34J, 34K, 34N and 35C) in the NW Minto Subprovince. These intrusions tend to be a little larger and more concentrated in the sheets located in the NW (34K and 34N).

U-Pb dating on zircon of a pegmatite sample cutting the ultramafic intrusion containing the Qullinaaraaluk mineralization, in the Minto Lake area (Simard et al., 2005) yielded an age of 2720 ±2 Ma (David, 2012). This age indicates that the mineralized ultramafic intrusion is older than 2720 Ma. This also indicates that the Qullinaaraaluk Suite groups intrusions of various ages (Simard, 2008).

Parent et al. (2002, 2004) considered intrusions of the Qullinaaraaluk Suite to be post-tectonic, based on their massive and undeformed appearance. Field observations suggested that the intrusion of the Qullinaaraaluk mineralized zone was at an angle with respect to the structural grain (Labbé et al., 2000) and cut diatexite of the Le Roy Complex (2698 Ma; 2713 Ma, Baker and Constantin, 2003). However, dating on a pegmatite cutting the intrusion yielded an age of 2720 Ma (David, 2012), demonstrating that this intrusion is older than diatexites and that relationships with host rocks are more complex than those initially observed (Simard, 2008). Younger ages of 2705 Ma and 2706 Ma obtained in the Flipper and Tan mineralized zones, respectively, suggest that intrusions of the Qullinaaraaluk Suite may belong to several magmatic events (Simard, 2008).