The Kaaispaach Suite is a unit introduced by Beauchamp and Massei (2018) following the summer 2017 mapping work conducted by the Ministère. The area where this unit can be observed previously belonged to the Lac Barou Massif, a large group of felsic intrusive rocks described by Hocq (1985). However, there is no mention of syenitic rocks. 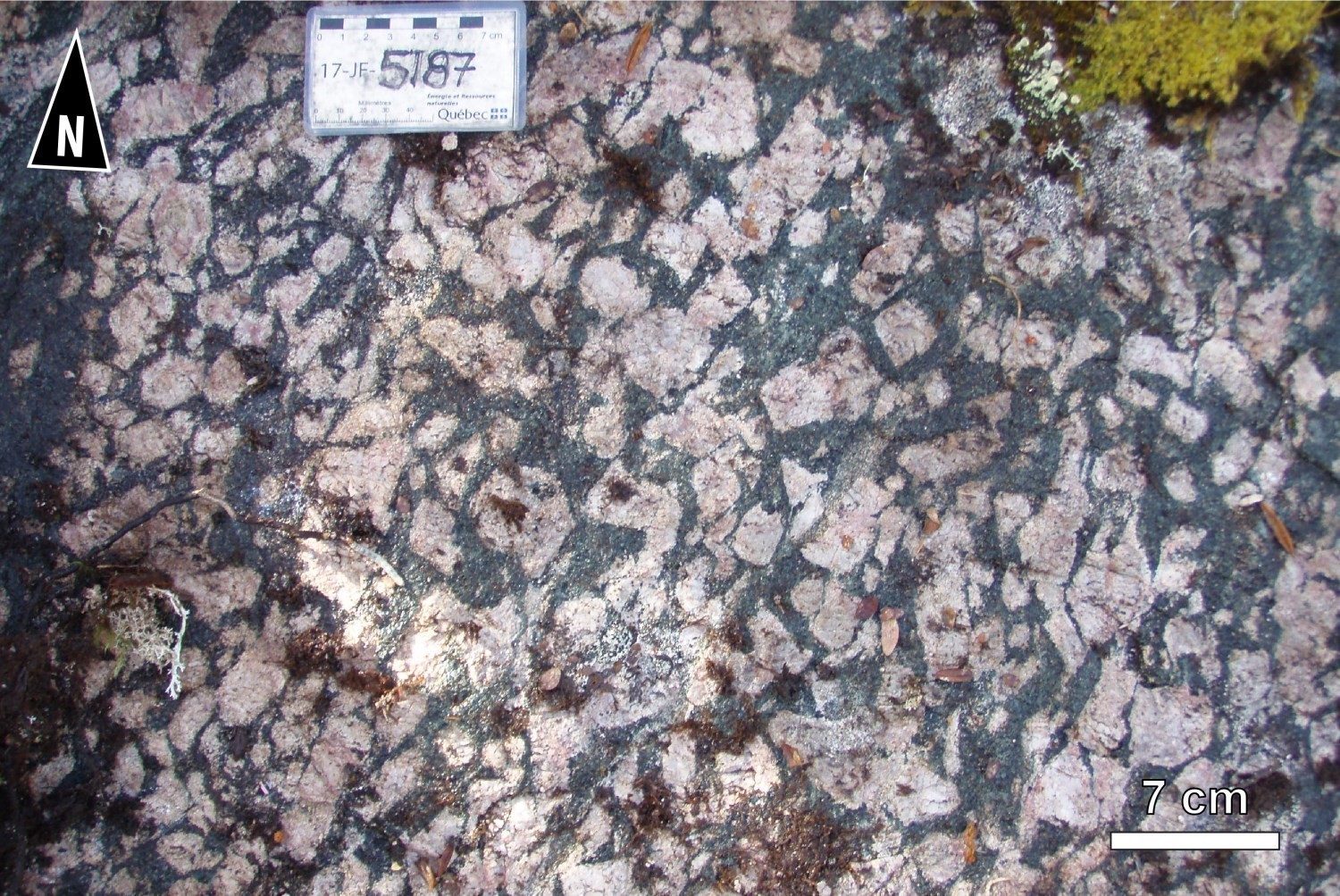 The Kaaispaach Suite combines syenite and K-feldspar syenite-type highly potassic rocks. On some outcrops, syenogranite or graphic-textured granite can also be observed. The rock has a porphyraceous structure with pink phencrystals of K-feldspar measuring 1 to 5 cm, in a blackish matrix with biotite and amphibole. Half of the outcrops characteristic of this unit were observed in a river bed. On these outcrops, feldspar appears more reddish. Amphibole (10%), the most abundant ferromagnesian mineral, is coarser than biotite (5%). A few grains of magnetite give the rock a low magnetism. The latter is generally massive and homogeneous, although it may be locally slightly foliated. 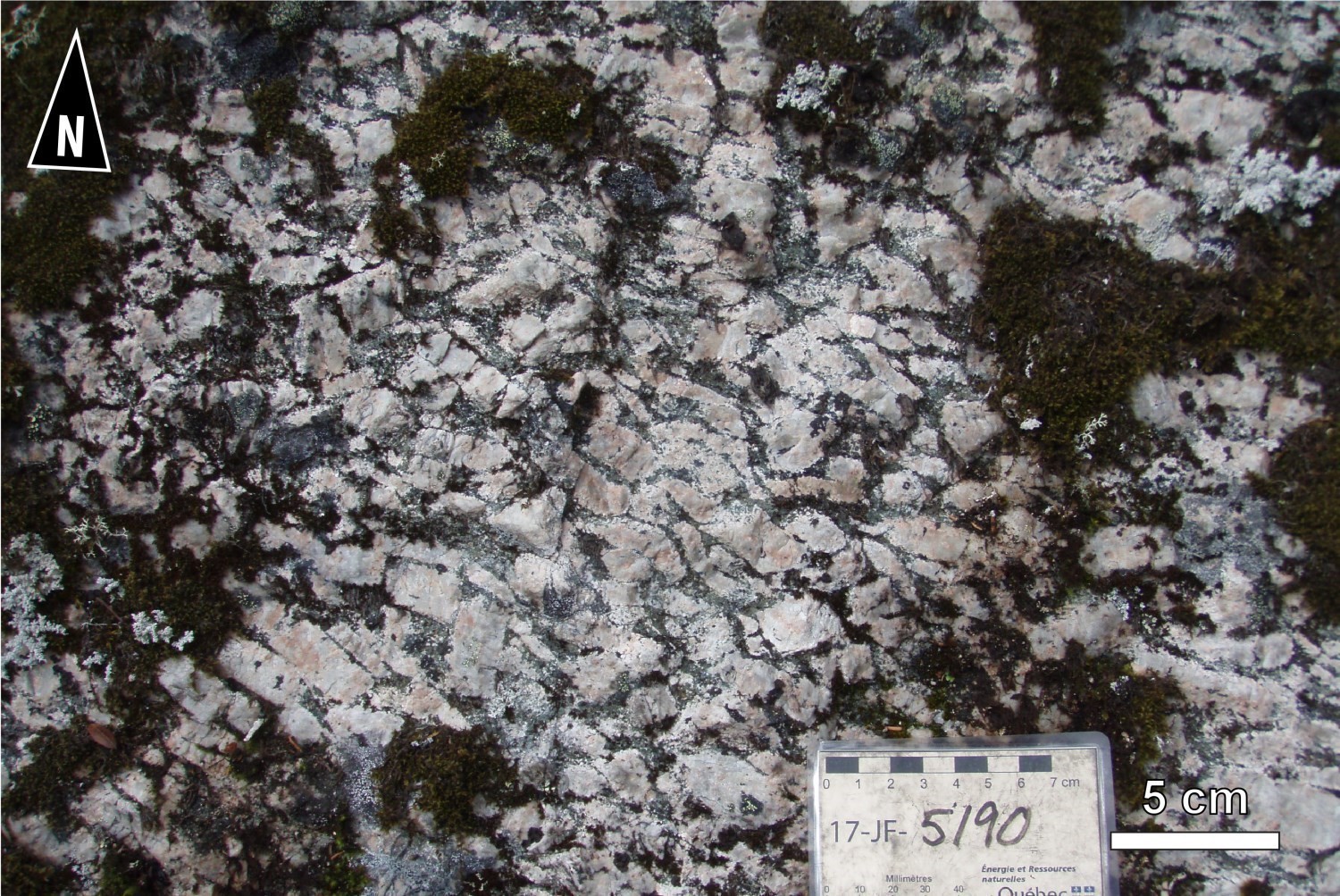 In thin section, moderate chloritization of biotite and amphibole can be observed. Locally, amphibole completely recrystallized into chlorite (outcrop 17-JF-5182). The main accessory minerals are epidote, white mica, clinopyroxene, zircon, apatite and sphene. The latter can account for up to 1% of the total rock. In places, rutile is also visible in the amphibole (outcrop 17-SB-4035).

From a geochemical perspective, the Kaaispaach Suite rocks are calc-alkaline (Ross and Bédard, 2009), metaluminous and type I (Maniar and Piccoli, 1989). The rare earth profile normalized to CI chondrite (McDonough and Sun 1995) shows an enrichment in light earth elements relative to heavy rare earth elements. Using diagrams by Legault and Lalonde (2009), which estimate the fertility of syenites with gold (based on rocks in the Abitibi Subprovince), rocks of the Kaaispaach Suite plot overall into the field of sterile syenites, although the Al2O3 vs MgO diagram seems less discriminating. 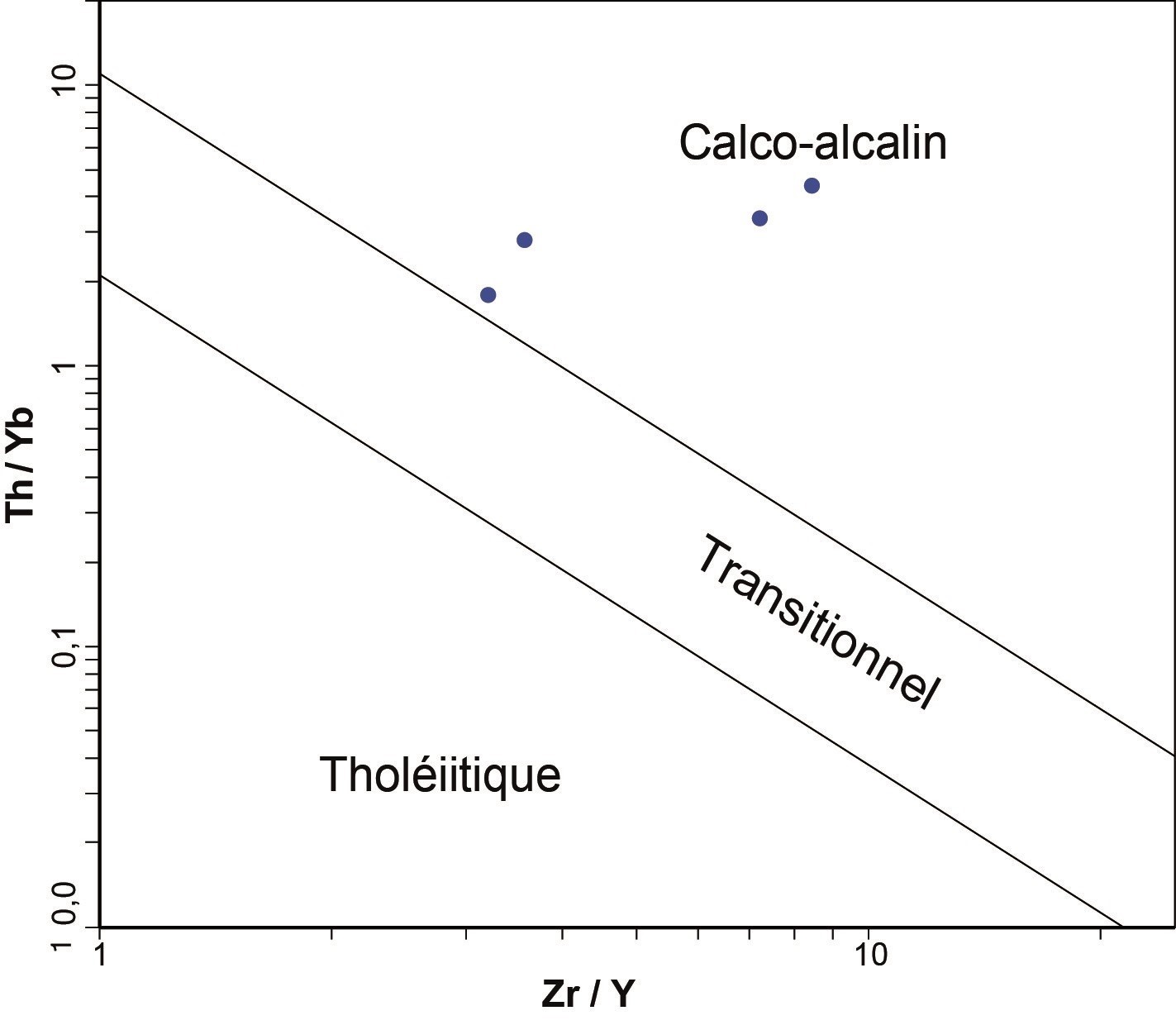 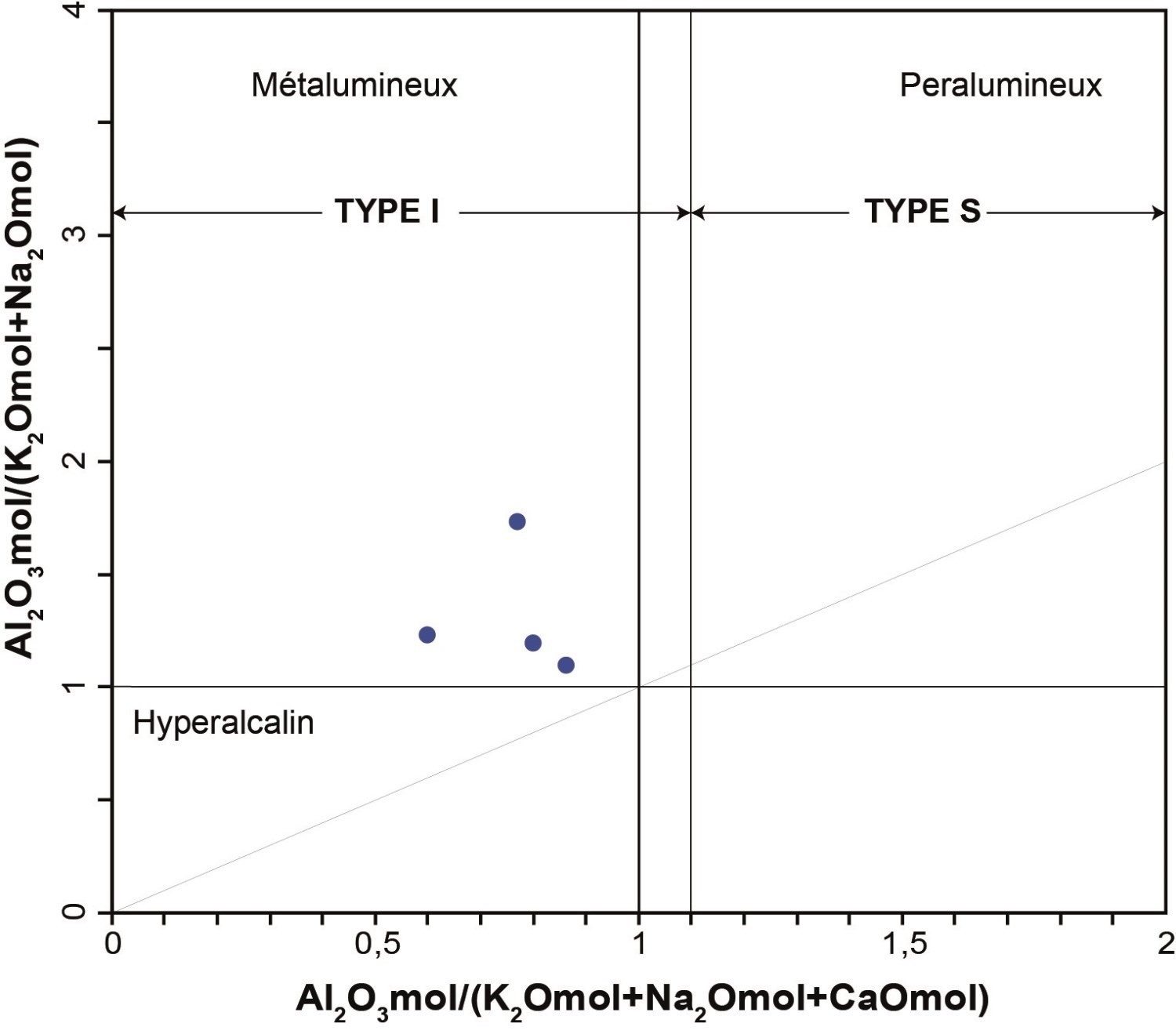 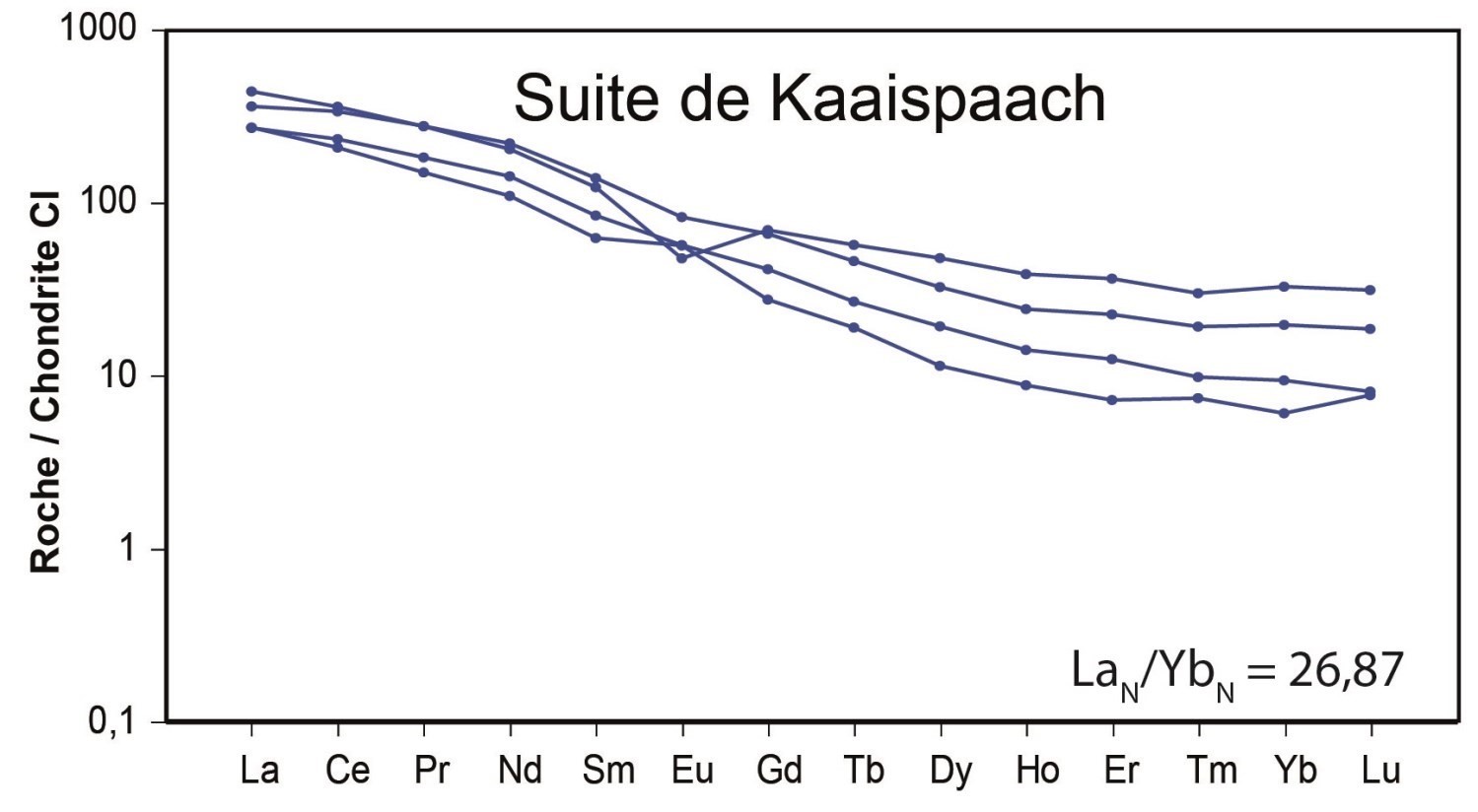 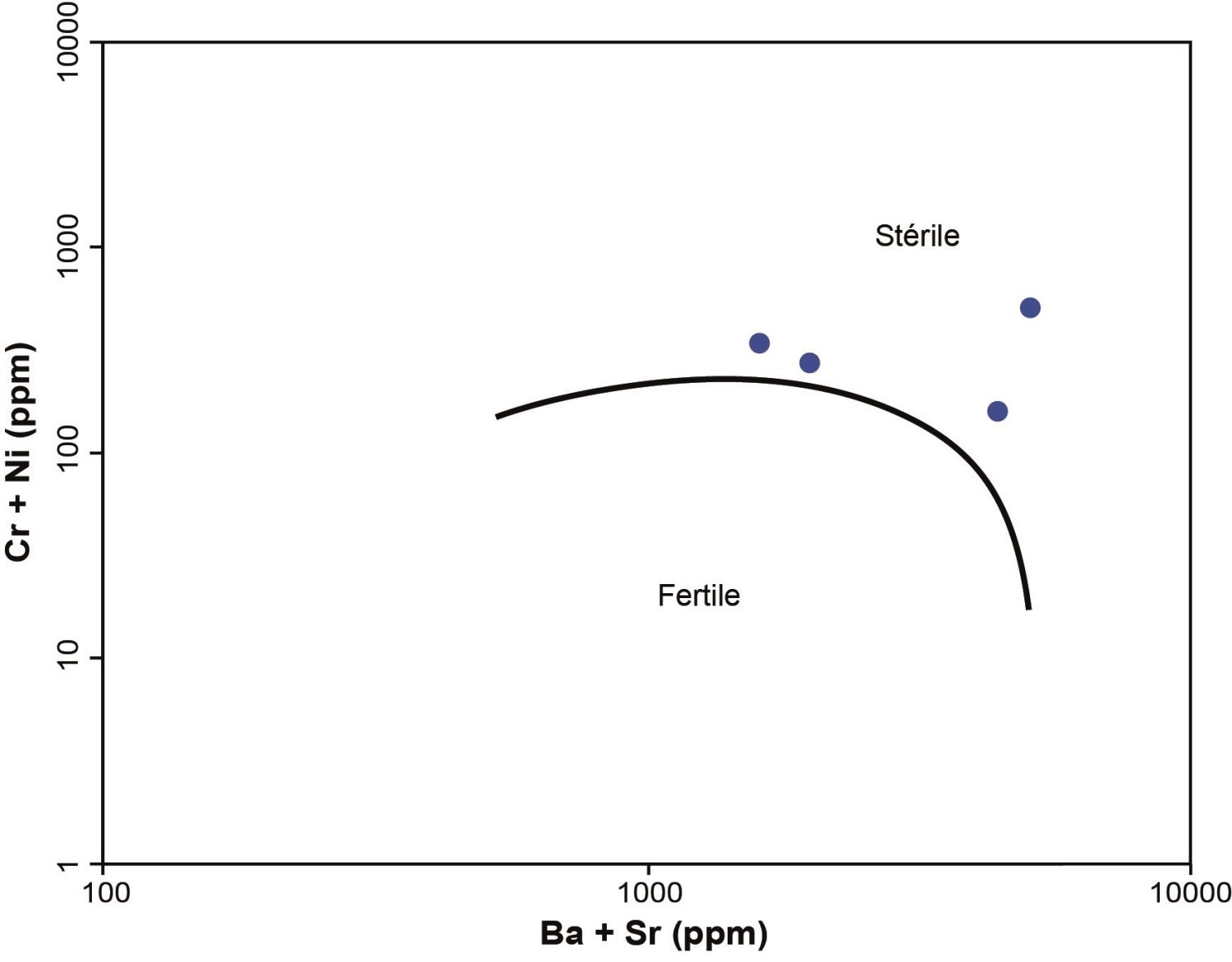 The Kaaispaach Suite was observed in NTS sheet 33A01, in the western part of the Otish Mountains. It consists of several small plutons 1 to 8 km long and just under 2 km wide. These plutons therefore have an elongated shape in a WSW-ENE direction, parallel to the Otish Mountains.

The Kaaispaach Suite, whose rocks are undeformed, is late in the area. It cuts the Laguiche Complex paragneiss and the Barou Intrusion, which forms the relief of the Otish Mountains.