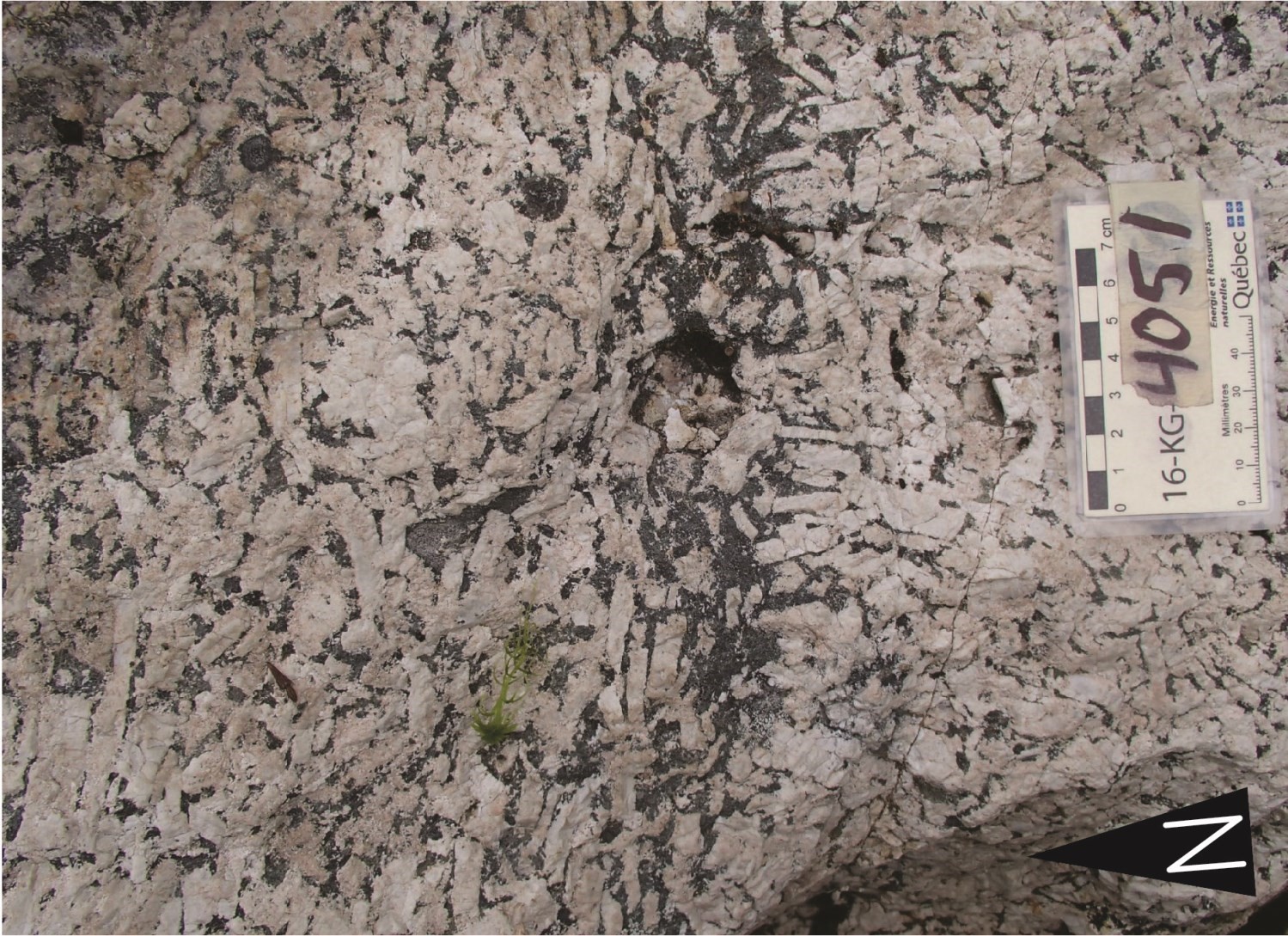 The Amisquioumisca Suite was introduced in order to regroup intermediate intrusions mapped in the summer of 2016 by Leclerc and Caron-Côté (2017) in the Amisquioumisca Lake area (NTS sheets 32K08). 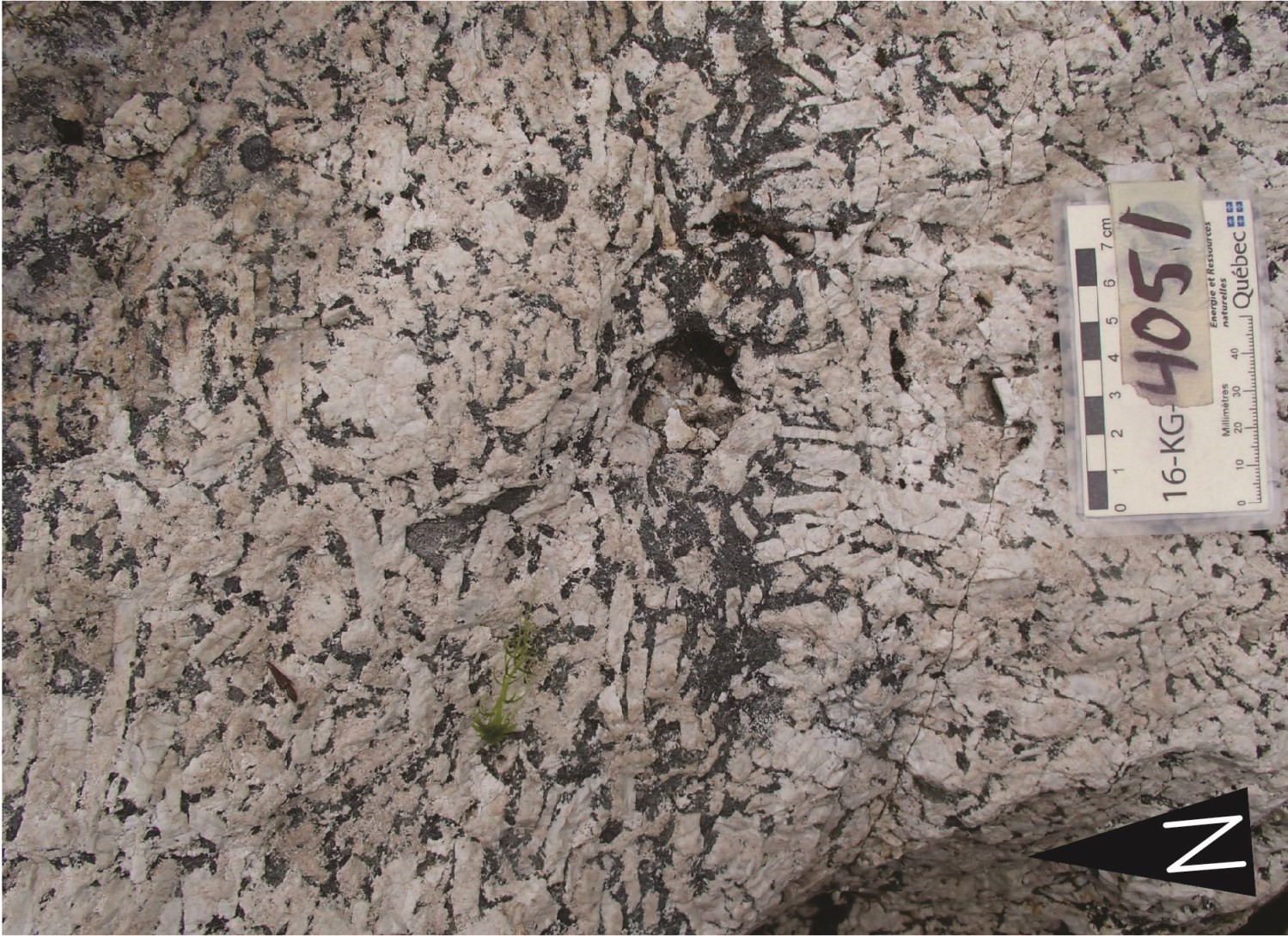 The nAamq1 unit consists of porphyritic syenite, monzonite, quartz monzonite, and smaller amounts of monzodiorite, quartz monzodiorite and granite. Syenite has a yellowish gray to dark pink patina, a coarse grain size and a generally homogeneous structure. Phenocrysts are composed of K-feldspar and albitized plagioclase, while the matrix consists essentially of hornblende. Locally, phenocrysts define a pronounced magmatic foliation reminiscent of a trachytic structure. East of Amisquioumisca Lake, the porphyritic syenite facies is characterized by K-feldspar phenocrysts (up to 4 cm) in a medium-sized melanocratic matrix. Porphyritic syenites are closely associated with melanocratic intrusions which vary in composition from monzonitic to quartz monzodioritic. The homogeneous syenite is brecciated by these intrusions, although locally irregular contacts seem to indicate a plastic setting.

Medium-grained quartz monzonites and quartz monzonites appear pinkish medium-gray in altered surface and medium-to-dark gray in fresh exposure. The main ferromagnesian minerals are biotite, hornblende and magnetite. K-feldspars are coarse and may form centimetric phenocrysts. Chlorite and epidote are secondary alteration minerals. Syenites and monzonites are foliated and become locally gneissic at the edge of the intrusion, in contact with surrounding gneissic diorite belonging to the Chensagi Suite.

The nAamq2 unit is mainly composed of intermediate rocks including monzonites, quartz monzonites, monzodiorites and quartz monzodiorites. It also includes some granodiorite and granite. The edge area of intrusions composing this unit is characterized by xenoliths of dioritic gneiss and amphibolite of the Chensagi Suite. Monzonite and quartz monzonite are medium to coarse grained and have a pinkish gray color in fresh exposure and a pinkish-beige to dark pink color in altered surface. Ferromagnesian minerals include biotite, hornblende and magnetite. Epidote is also present as a secondary mineral. K-feldspar crystals commonly exceed one centimeter in size; hence, the rock develops a porphyritic structure. These rocks are sometimes massive, but generally show a foliation characterized by the alignment of K-feldspar and hornblende crystals.

Monzodiorite and medium-grained quartz monzodiorite are beige to pale pink in altered surface. Biotite is the dominant ferromagnesian mineral, locally accompanied by magnetite and hornblende. Accessory epidote occurs as an alteration mineral. These rocks are usually massive.

Granodiorite and granite are minor lithologies and usually appear as intrusions in the aforementioned facies. They generally have a pale pinkish-white color in fresh and altered surface and a fine to medium grain size. They contain biotite and magnetite and are locally altered to hematite.

The nAamq1 unit forms an ovoid-shaped intrusion showing NE-SW elongation east of Amisquioumisca Lake and west of Caminscanane Lake (NTS sheet 32K08 NE). It is roughly 20 km long by 8 km wide, and covers a total area of 155 km2. The nAamq2 unit corresponds to two intrusions of irregular and elongated shape located at about 10 km SW of Amisquioumisca Lake (SW of NTS sheet 32K08). They cover areas of 25 and 50 km2 respectively.

South of Amisquioumisca Lake, outcrops at the SW border of the main intrusion (nAamq1) show an irregular intrusive contact with dioritic gneisses of the Chensagi Suite which are here characterized by xenoliths of paragneisses and amphibolites probably from the Rocher Complex (nAroc). The edge areas of the intrusions are characterized by xenoliths of diorite, amphibolite and paragneiss. Rocks of the Amisquioumisca Suite are cut by a diabase dyke assigned to the Lac Esprit Dyke Swarm (pPesp), as well as by a gabbro dyke attributed to the Biscotasing Dykes (pPbis).