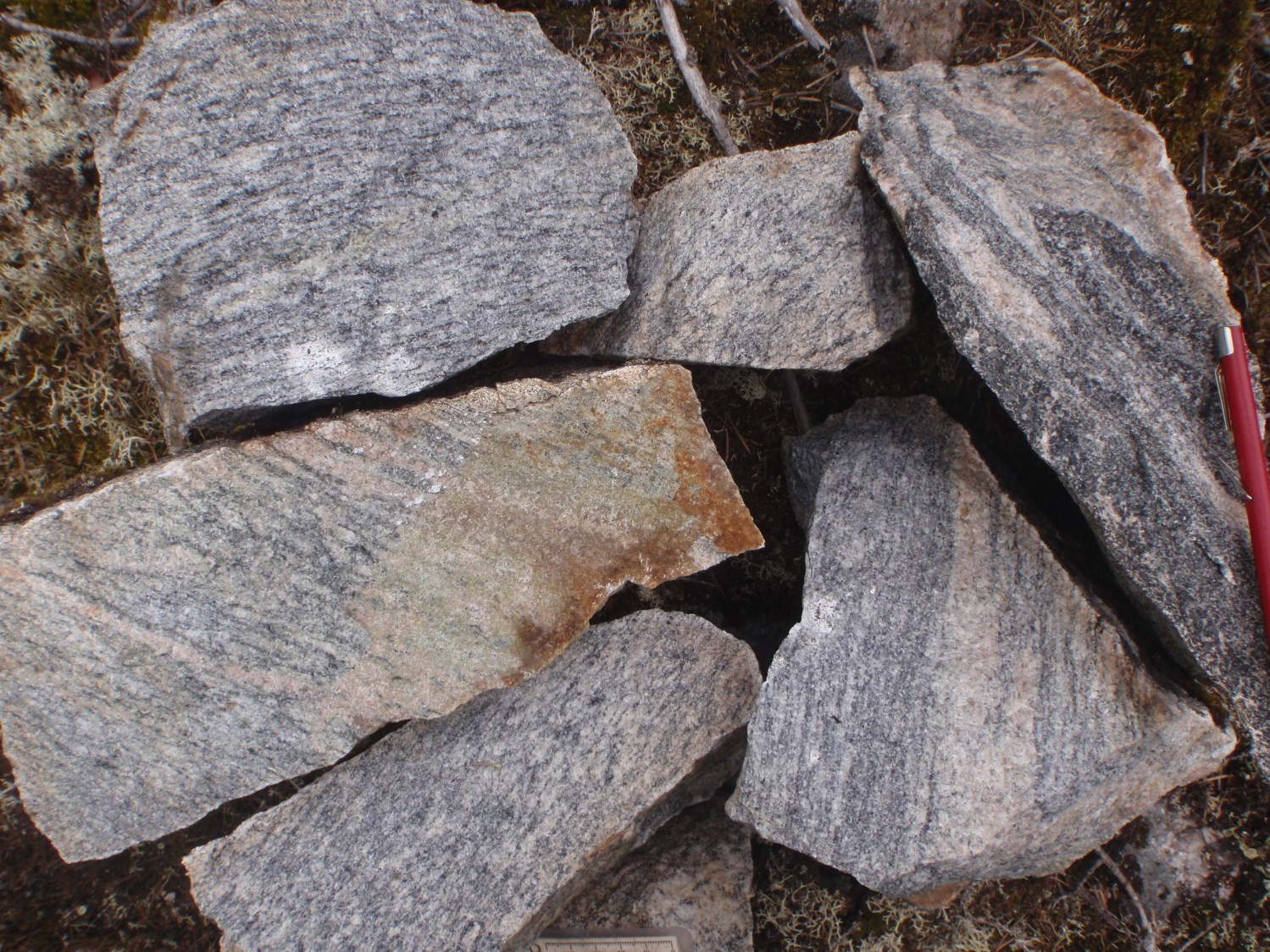 The Amikap Pluton is a lithodemic unit introduced to describe an intrusive mass of tonalitic gneiss and foliated granodiorite in the Rupert River area (Bandyayera and Daoudene, 2018). The elliptical shape of the pluton and its intrusion in the Champion Complex, in contact with massive granodiorite and quartz diorite units, seemed to indicate that the Amikap Pluton was late. Bandyayera and Daoudene (2018) proposed a synkinematic emplacement of the pluton in a shear zone based on its highly deformed margin, compared to the core which is rather massive to foliated. New U-Pb data from a sample of tonalitic gneiss gave an age of 2732 ±3 Ma, interpreted as the age of the Amikap Pluton. This age is consistent with synvolcanic intrusions of the Eastmain River volcanic band (Moukhsil et al., 2003). These data suggest that the Amikap Pluton represents an ancient gnessic dome within the Champion Complex.

The Amikap Pluton is associated with a strong elliptical magnetic anomaly measuring 14 km x 8 km. It is essentially a homogeneous mass of tonalitic gneiss (unit nAamk1), the centre of which consists of massive to foliated granodiorite (unit nAamk2). 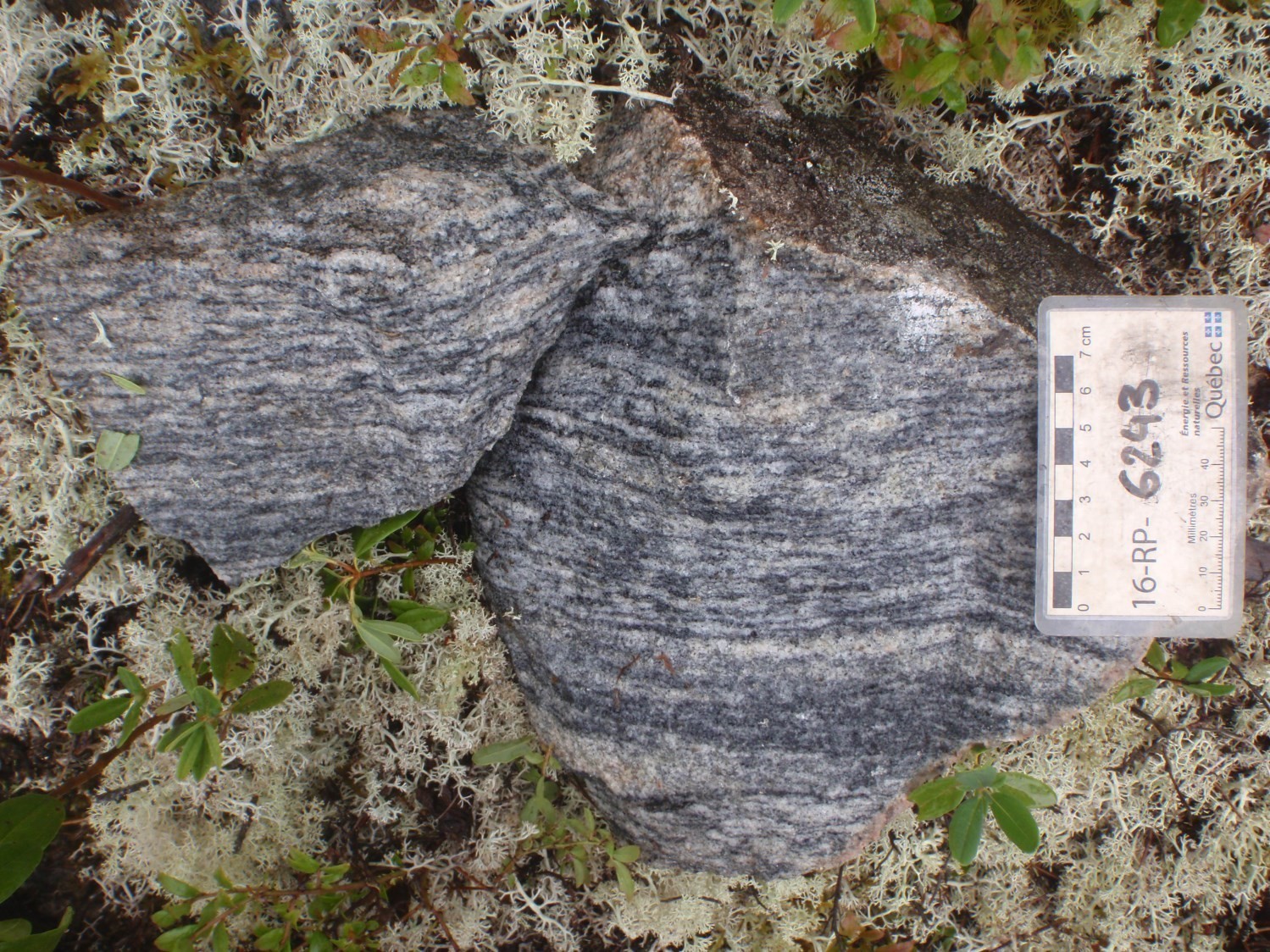 Tonalitic gneiss is found on the margin of the Amikap Pluton, in contact with massive granodiorite of the Champion Complex (Achp4), in the south, and with massive to foliated quartz diorite and diorite (Achp3) in the north. Fine to medium-grained rock is locally banded and is light grey in altered surface and fresh exposure. Gneissosity results in alternating light and dark bands generally millimetre-wide, uncommonly centimetre-wide. Dark bands are locally dioritic. Tonalitic to dioritic bands contain 10-30% hornblende, 5-15% biotite, 5% magnetite and 3% epidote.

U-Pb dating on a tonalitic gneiss sample (outcrop 2016-RP-6243) yielded an age 2732 ±3 Ma, interpreted as the intrusion age of the Amikap Pluton. This age is consistent with synvolcanic intrusions of the Eastmain River volcanic band (Moukhsil et al., 2003).

It was not possible to bring out a younger age for overgrowth by analyzing crystal edges at locations identified in cathodoluminescence.

The Amikap Pluton is a gneissic to foliated intrusive mass located in contact with massive granodioritic and dioritic units of the Champion Complex. The margin of the pluton is deformed and gneissic. The Amikap Pluton is cut by the Mistassini Dyke Swarm, Matachewan Dyke Swarm, Senneterre Dykes and Abitibi Dykes. The junction of all these diabase dykes is located in the centre of the pluton.