Sedimentary rocks of this formation were first identified by James and Mawdsley (1929), who associated them with “Keewatin or Timiskaming” type units. Subsequently, Tremblay (1946, 1947a, 1947b, 1950a, 1950b) assigned these units to the “Kewagama Group”. Dawson (1966) subsequently used the same nomenclature as Tremblay. These sedimentary rocks were described in detail by Jones (1964) in the NW quarter of the Fiedmont Township. This author provides a comprehensive description of these sedimentary rock units (grauwacke, granitoid pebble polygenetic conglomerate, biotite schist, quartzite), but does not provide a formal formation name at that time. He only calls them “Fiedmont Sedimentary Zone” and interprets them as being contemporaneous to volcanic rocks that surround them. The presence of these sedimentary rocks is also mentioned in Imreh (1979).

The formal name « Fiedmont Formation » appears for the first time in the cartographic synthesis work of Imreh (1984). This name and its internal subdivisions also appear in the mapping of sheet 32C05-200-0201 by Imreh (1991). The work of Imreh (1984, 1991) thus reports the presence of sedimentary rocks (grauwacke, conglomerate) located at the interface or within volcanic units of the Héva-Nord Formation and in the upper part of the Dubuisson Formation, in accordance with its stratigraphic nomenclature at the time, which has been significantly modified. Following this logic, the name « Fiedmont Formation » is also used by Beullac (1983), one of the collaborators of the Imreh team in the 1980s, to describe the eastward continuity of these sedimentary units in sheet 32C05-200-0202.

The Fiedmont Formation includes conglomerate, conglomeratic sandstone (nAfd3), grauwacke and biotite schist (nAfd2) units, as well as exhalite and scarce oxide facies iron formations (nAfd1). These units are described in more details in the following sections. General stratification is characterized by alternating massive grauwacke beds, 2 to 5 cm thick, and fine-grained schistose beds, 7 to 10 cm thick, all forming a SW polarity homoclinal sequence. This stratification is generally observed pretty well but with unequal quality, in part because of increasing deformation on the edges of this formation, close to the La Corne Batholith or even to large longitudinal faults. Stratification has an orientation ranging from E-W to NE-SW, with a 30º to 60° inclined dip to the SW. It should be noted that these sequences are overturned, as are units observed in the Landrienne and Lanaudière formations; the Manneville Thrust Zone is likely the cause of this polarity reversal.

Lithologies have a relatively well-developed schistosity, particularly on the edge of the La Corne Batholith. Schistosity is generally oriented 110° and dips northward at 50°. It curves further towards the SE on the eastern edge of sheet 32C05-200-0201. It is further marked by preferential orientation of biotite and sericite flakes. 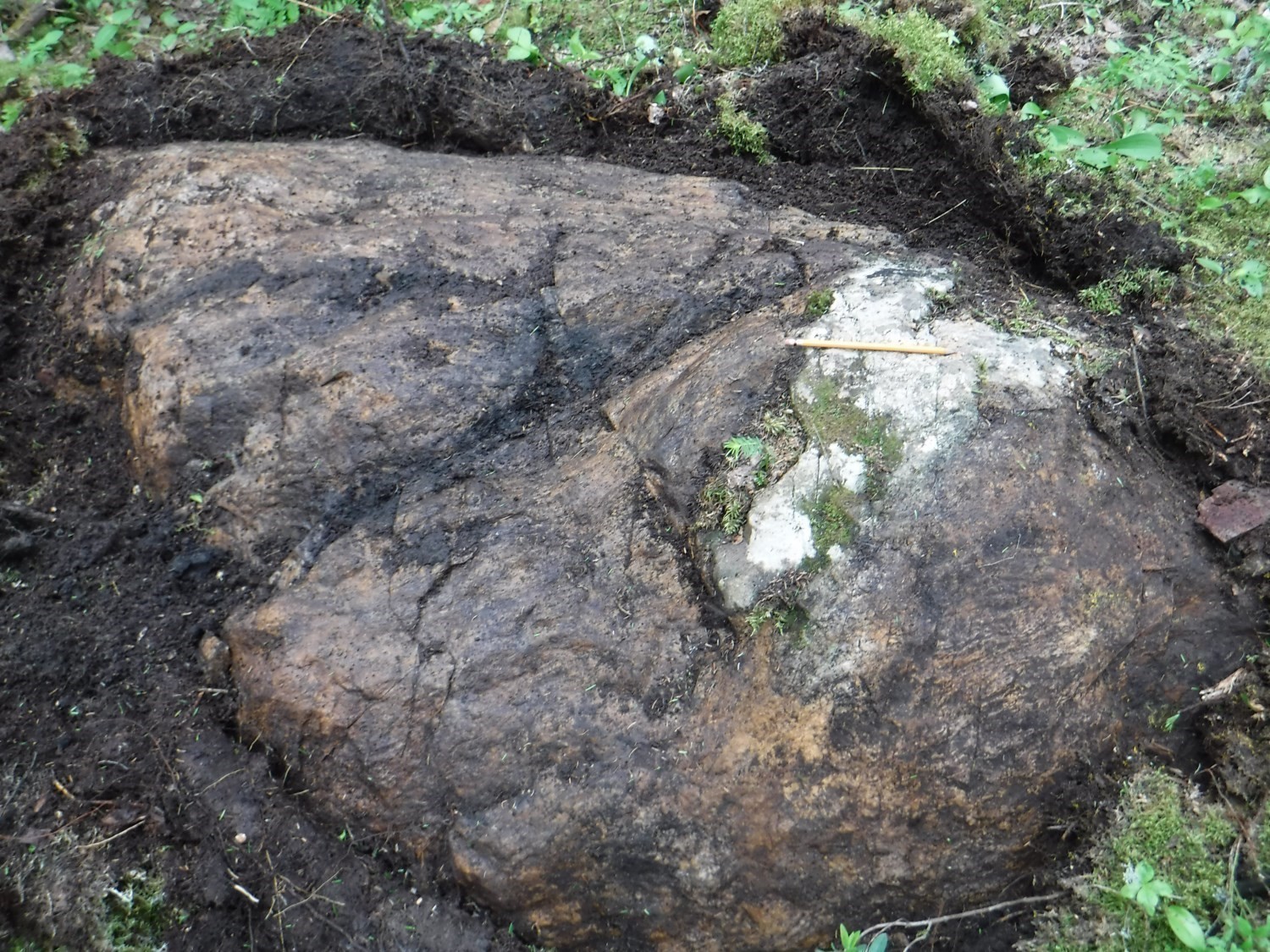 This lithological unit consists of exhalite, a very fine-grained siliceous sedimentary rock, and local sandy ferruginous horizons. Fine-grained, siliceous and banded siltstone associated with this unit are found very locally. The magnetic susceptibility of ferruginous lithologies is significantly higher than that of surrounding sedimentary rocks. Unit nAfd1 is uncommon and has only been observed at the SE end of this formation, specifically within unit nAfd2. 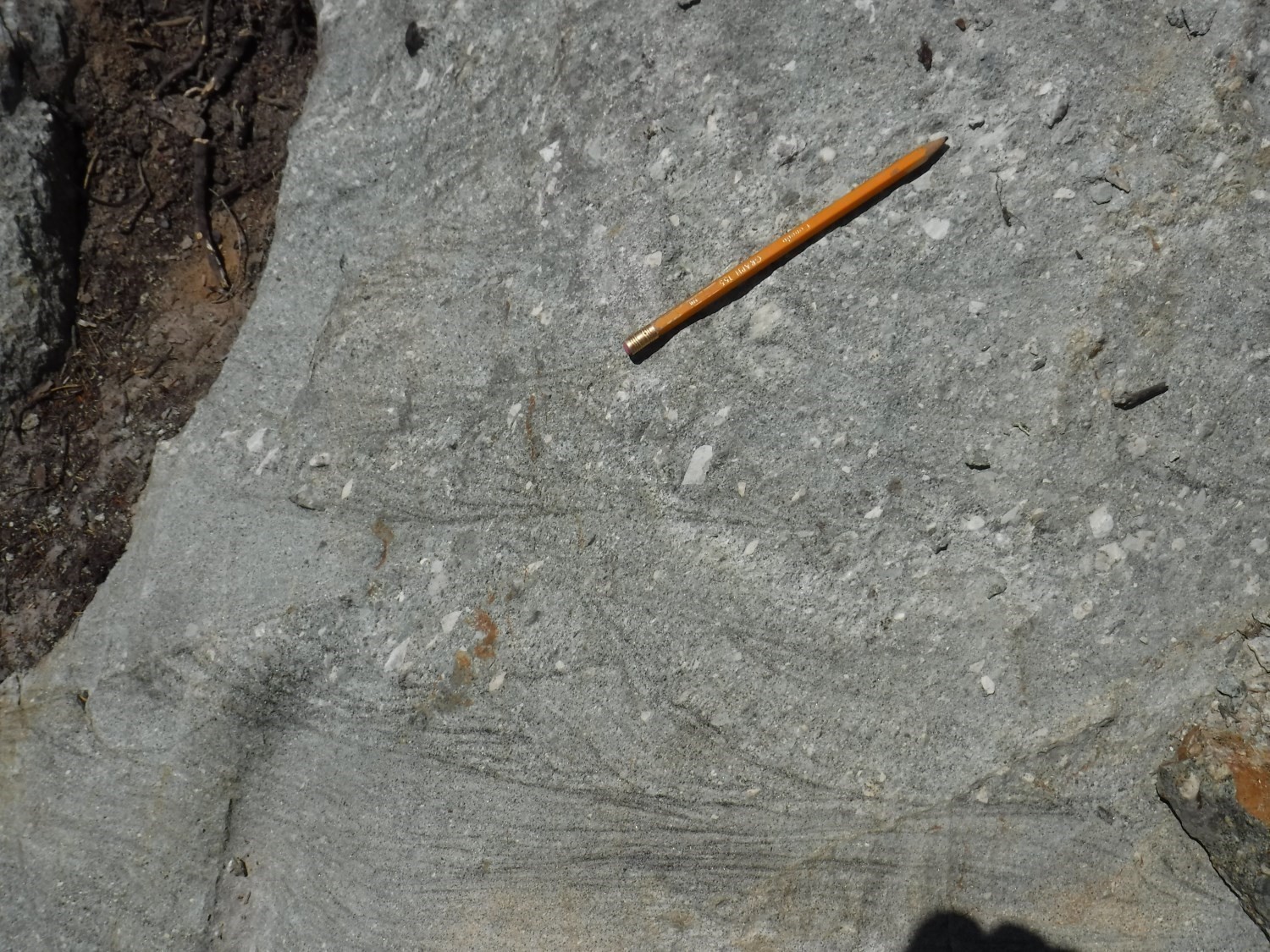 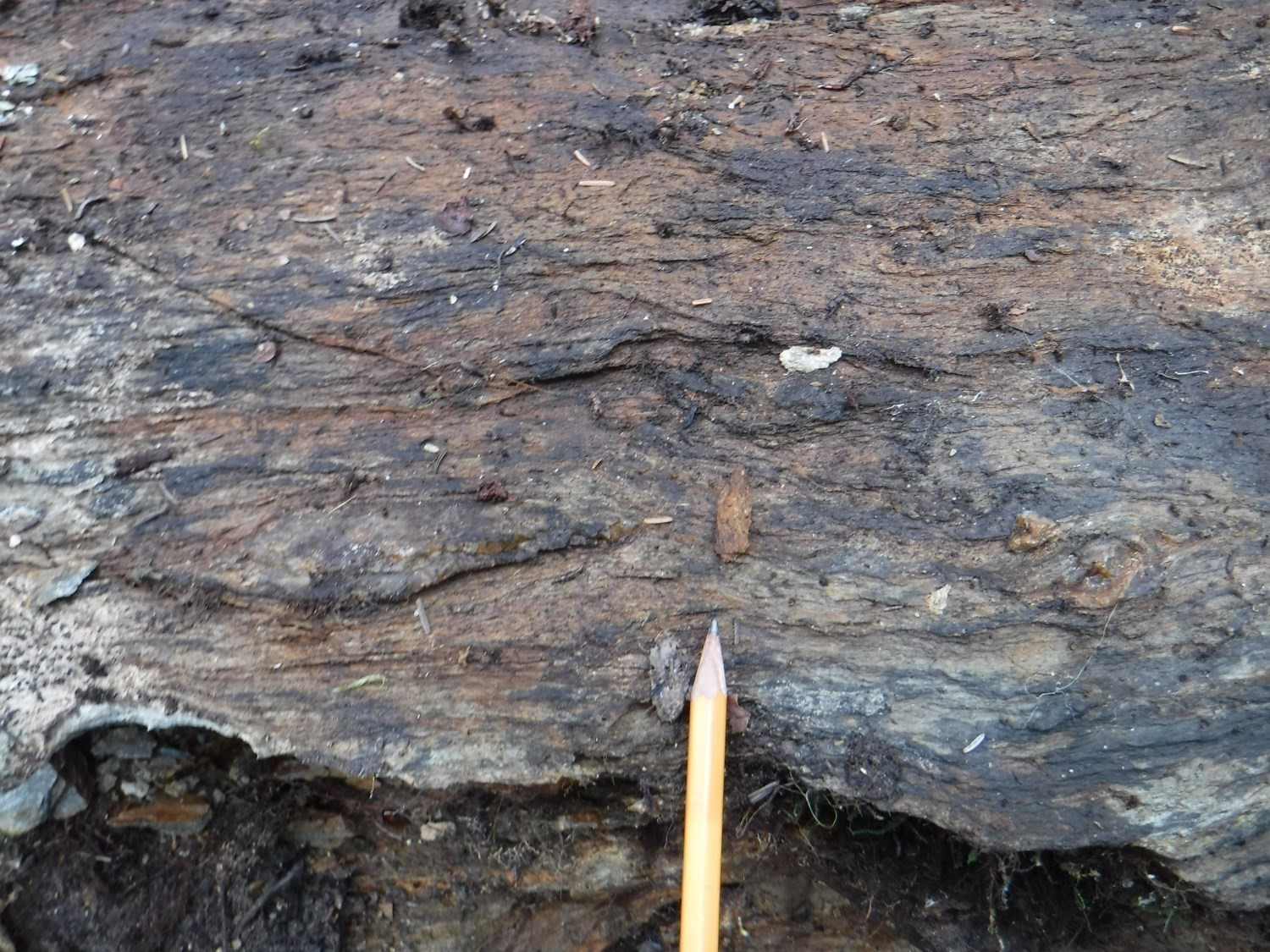 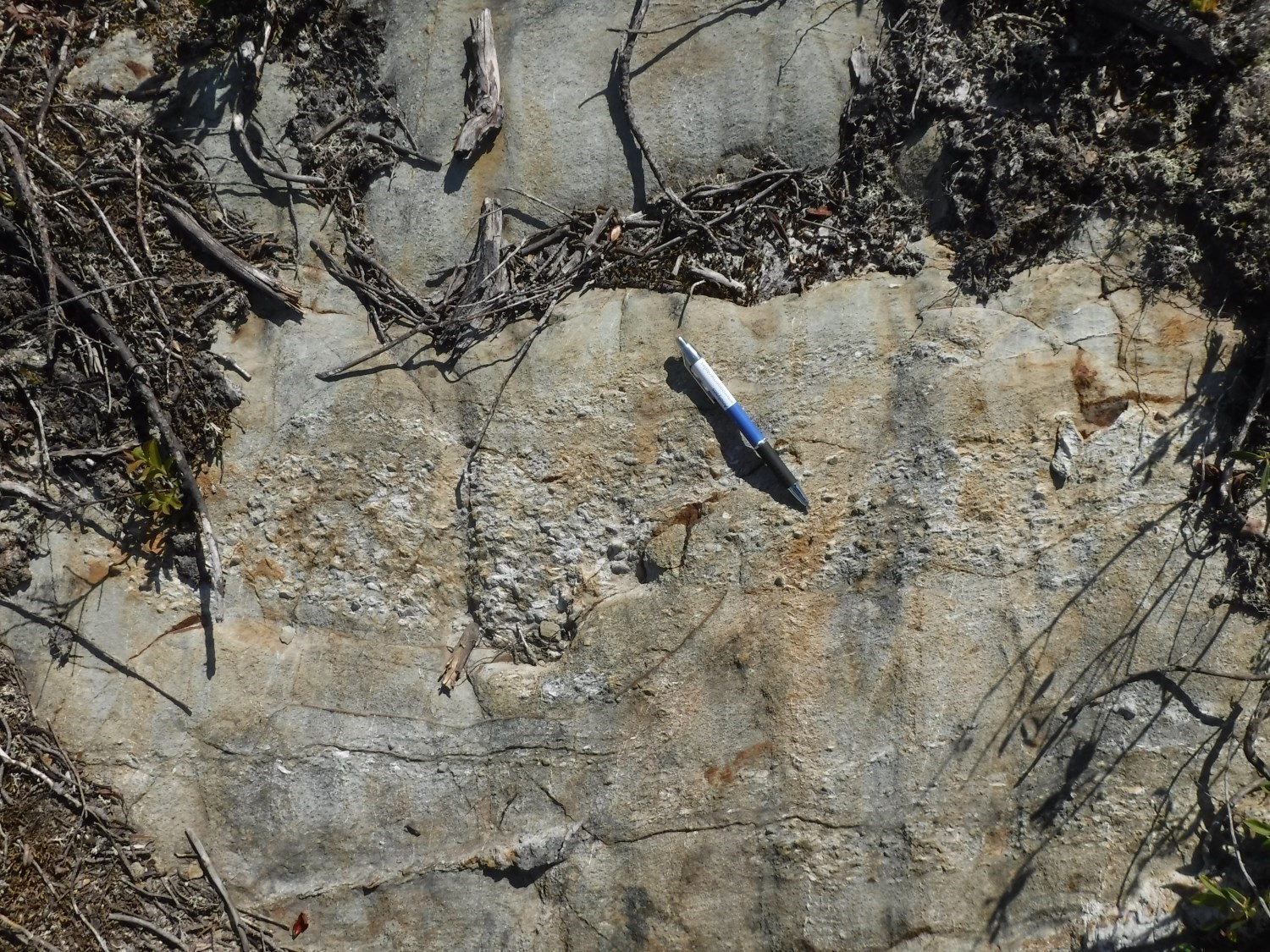 Sandstone beds are massive to well laminated, medium to fine grained. They are dark grey, with shades ranging from grey to brown in altered surface. The majority of these rocks are composed of quartz and feldspar, with interstitial biotite, sericite and chlorite. Cross-beds are observed in these grauwackes, indicating a stratigraphic summit towards the SW. Such structures are representative of a shallow fluviatile deposition environment. 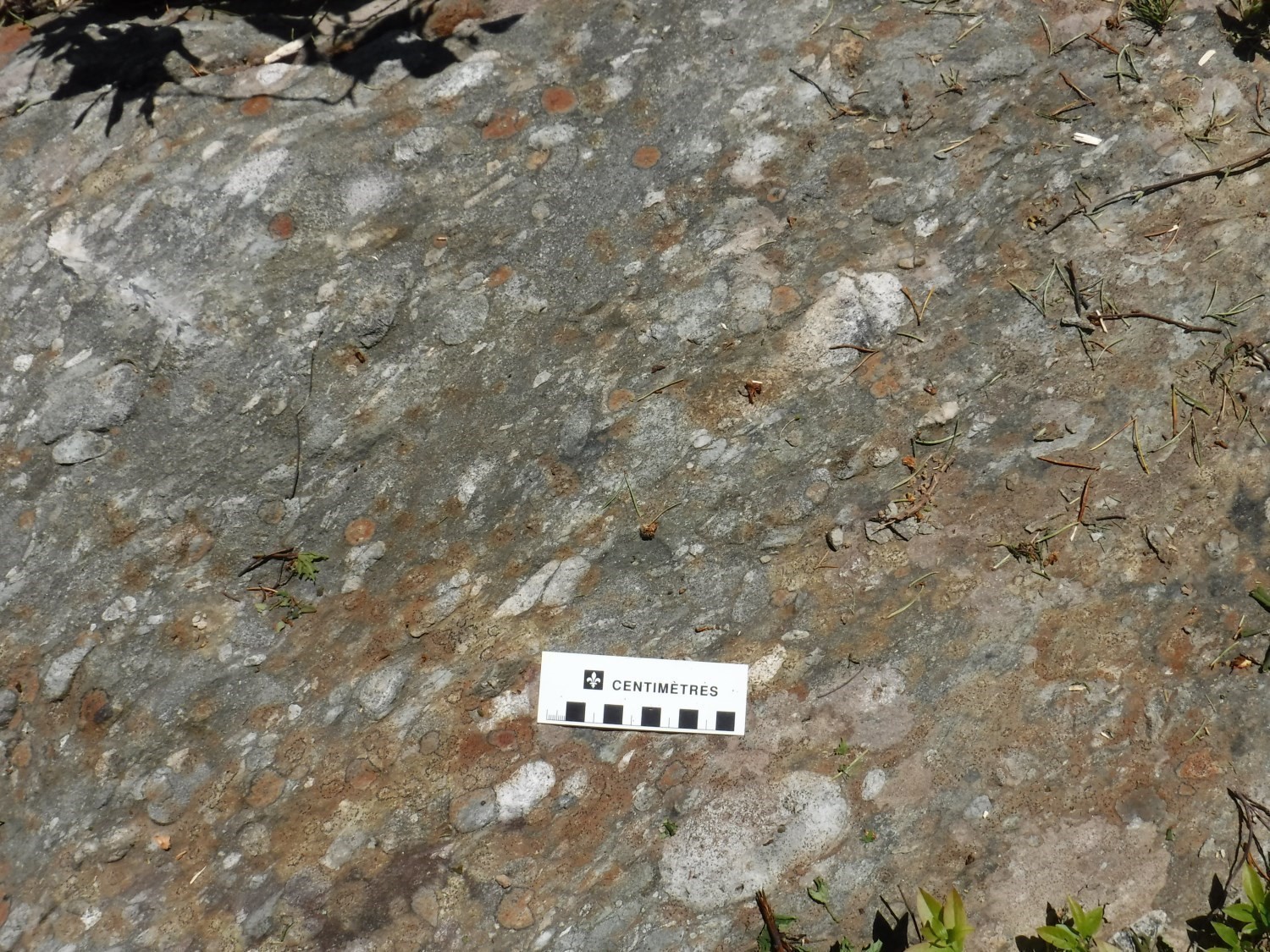 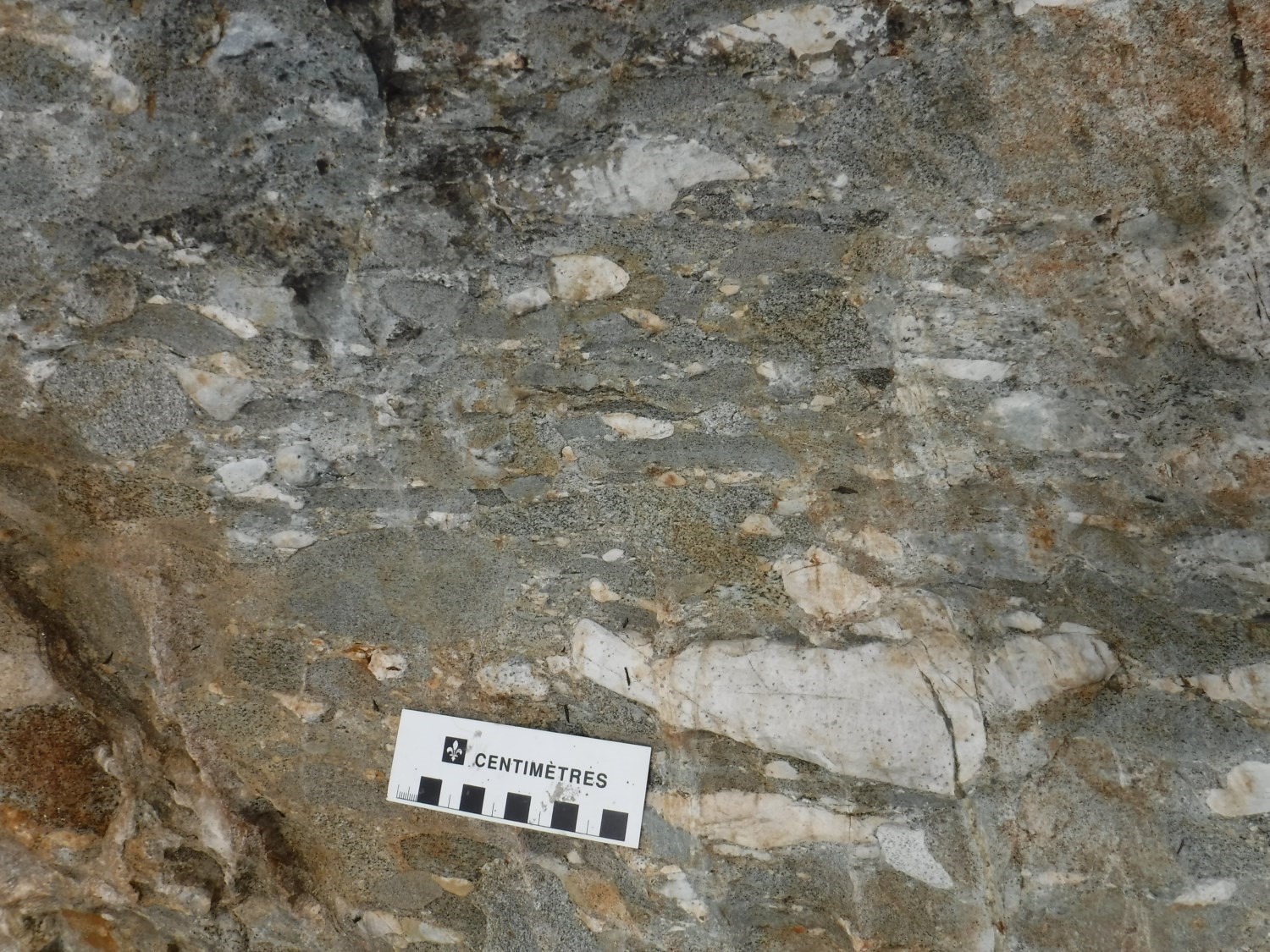 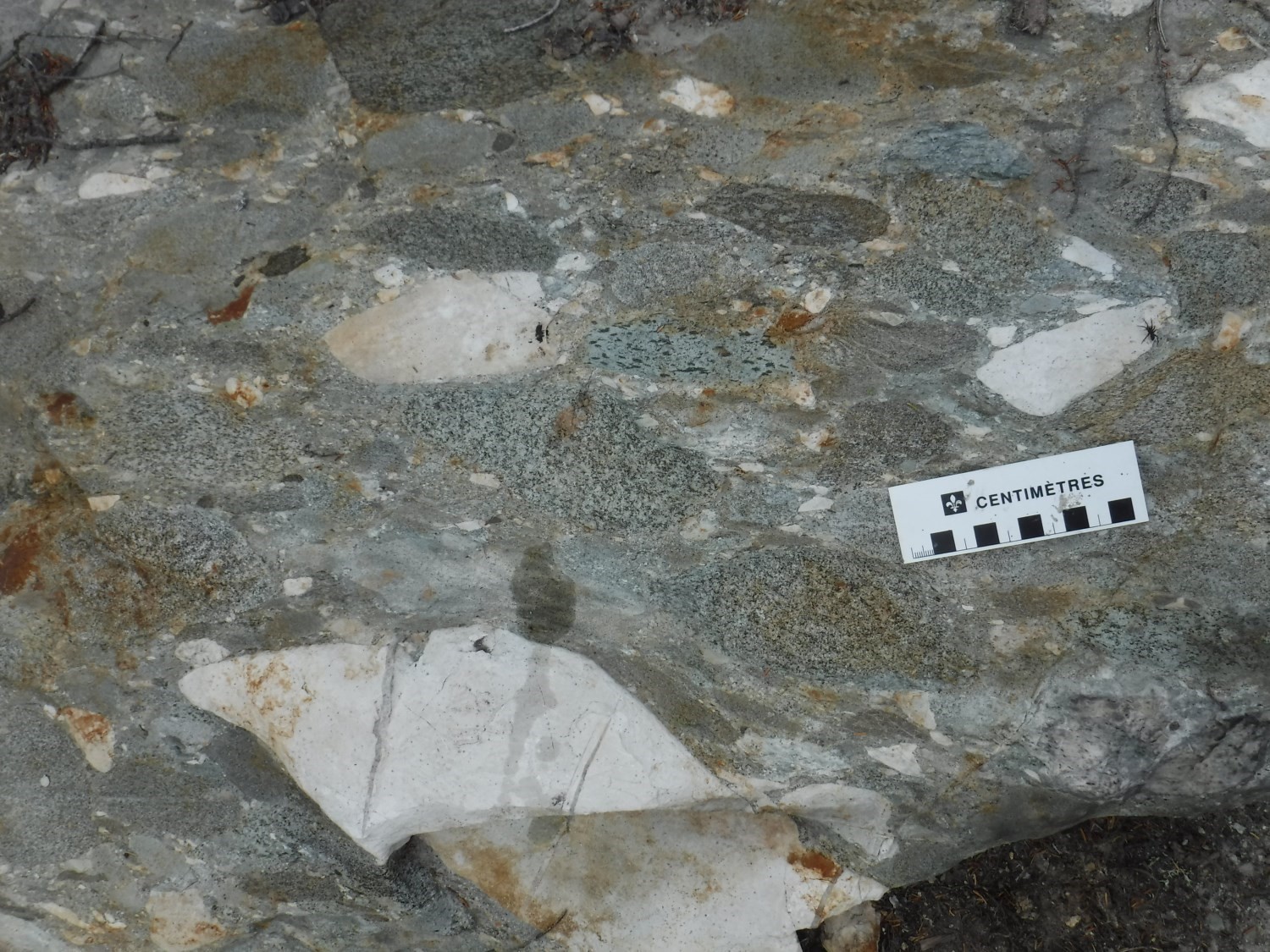 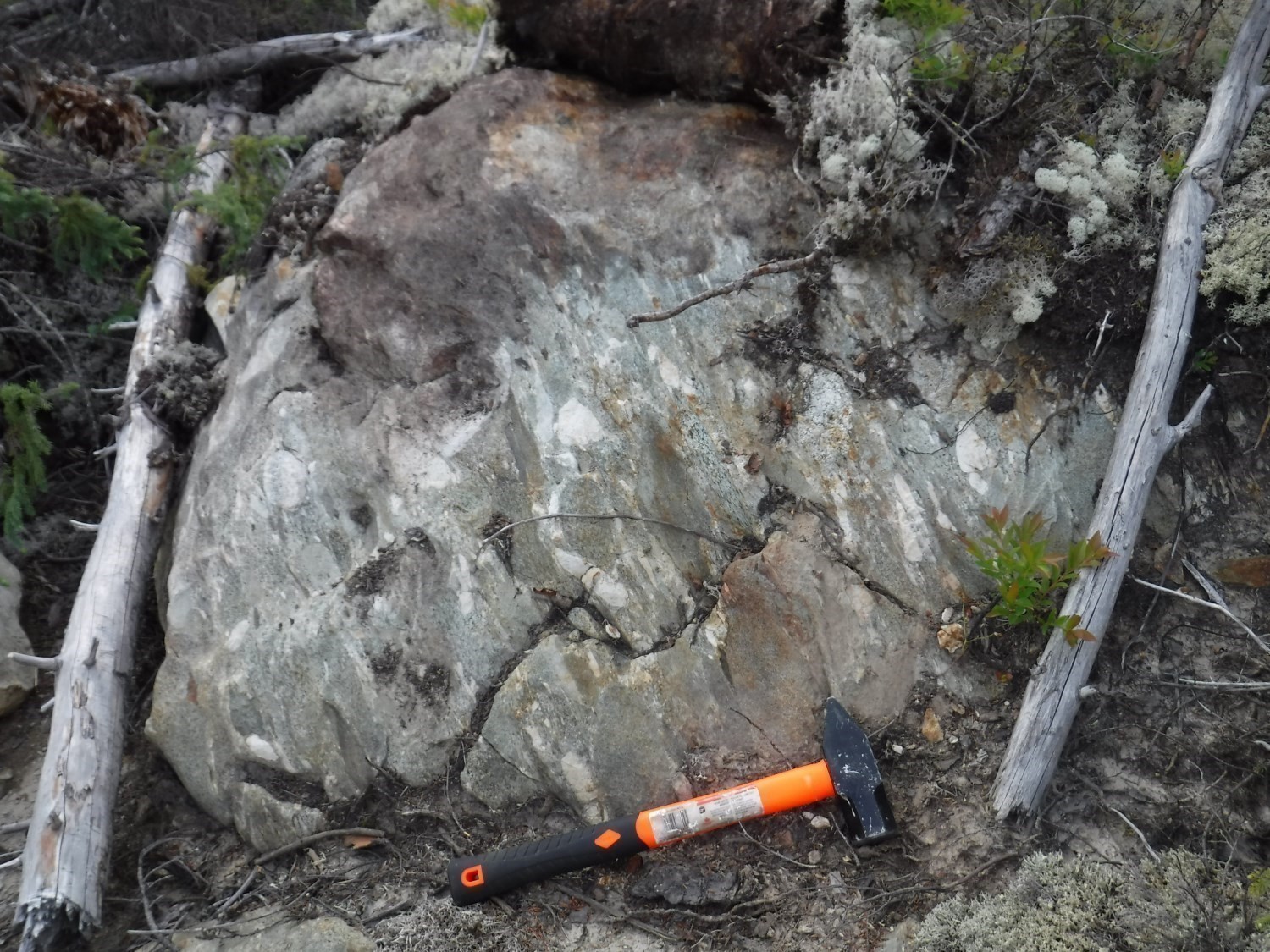 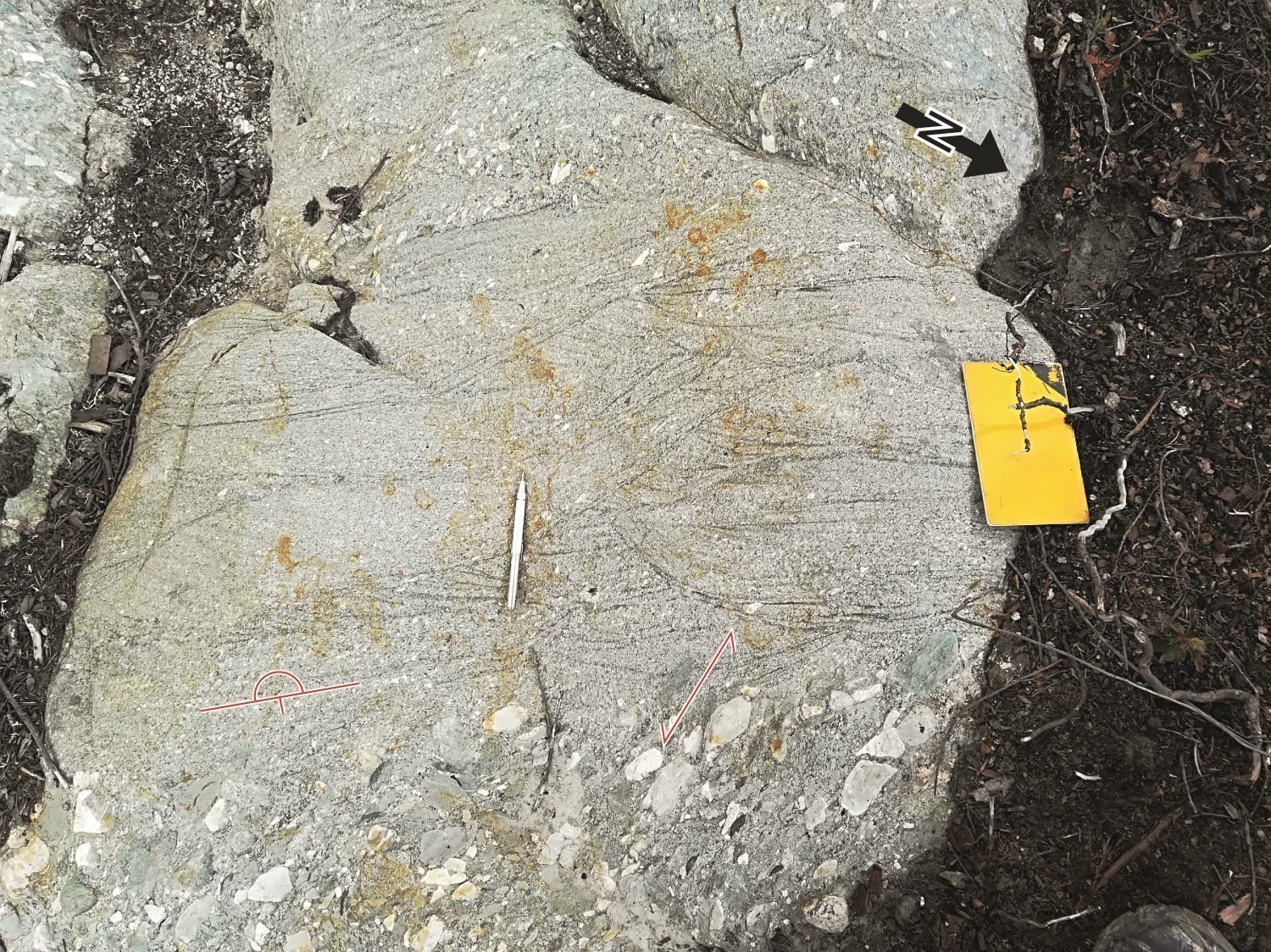 Conglomerate beds are located in the central and eastern portions of sheet 32C05-200-0201. This unit consists of blocks, stones and pebbles of mafic and felsic volcanic rocks, biotite quartz diorite, foliated biotite tonalite and quartz vein fragments. These various fragments are coated with a sandy matrix. They are rounded, elliptical, subangular or angular and can reach 20 to 30 cm in diameter. Conglomerate and grauwacke beds can reach an average thickness of a few tens of centimetres.

The Fiedmont Formation is generally oriented ENE-WSW over a total length of ~18 km and an average width of ~1 km. In fact, it is oriented E-W and curves westward around the La Corne Batholite, where it takes a SSW direction.

The particular facies’ associations and polygenetic nature of conglomerates suggest a deposition environment commonly associated with Timiskaming age basins. However, an ongoing U-Pb dating on zircons from a sandy facies gave a preliminary age of 2717 Ma (David, personal communication, 2017), comparable to that of the Lanaudière Formation. Further mapping and geochronology work will be required on this formation to clarify these ambiguities.

The Fiedmont sedimentary strip occupies a particular structural position, narrowly confined by regional-wide faults on its north (Aiguebelle Fault), east and south sides. It shows an abnormal contact with the Lanaudière Formation to the south and the Landrienne Formation to the north.