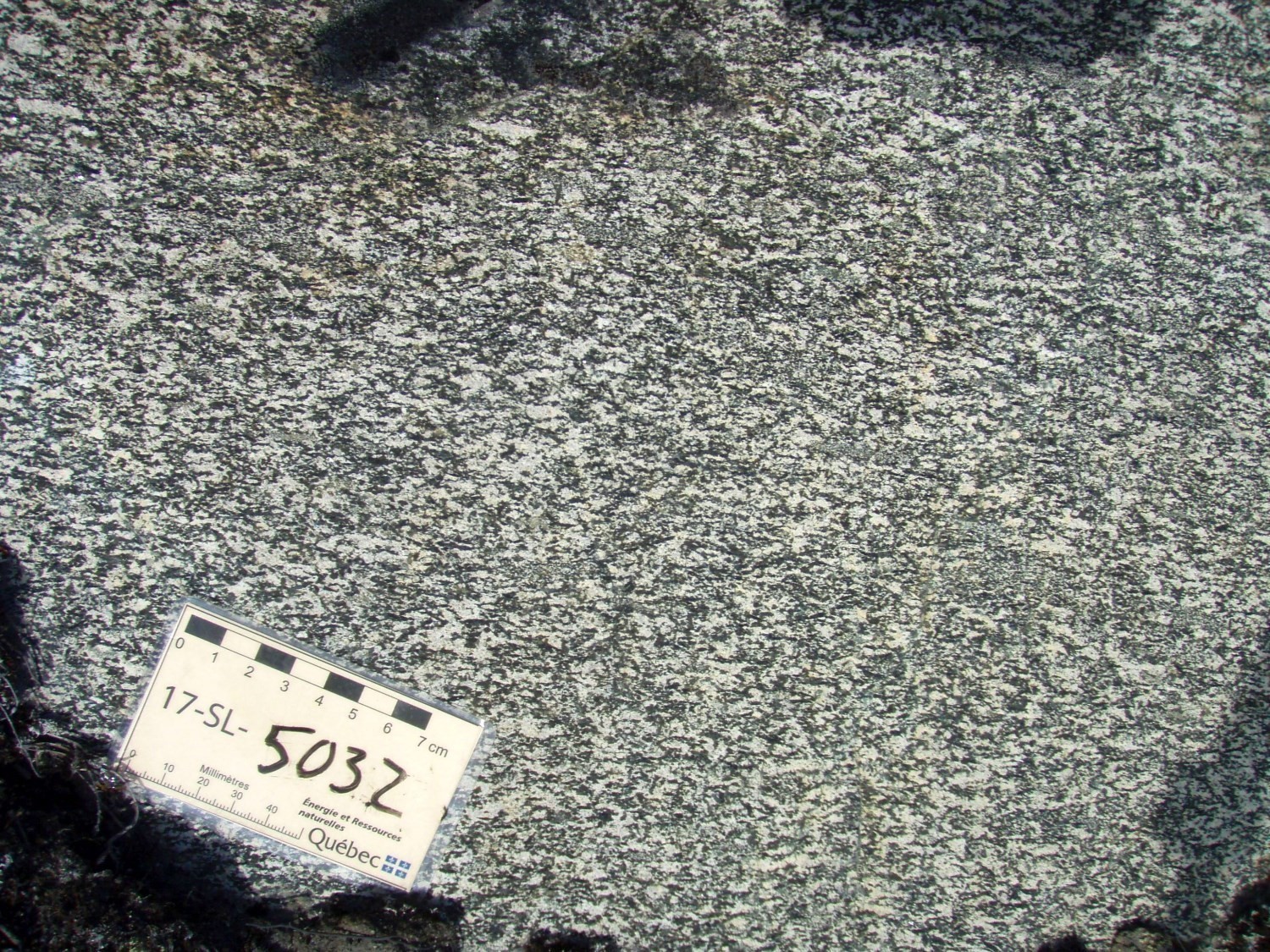 This unit was first described by Hardy (1976) in the Kyak Bay area between the Virgin and Hardy lakes (NTS sheet 25C04). This author describes it as a massif of hypersthene gabbro. The name Baie Kyak Intrusion was introduced by Kiddie (1999) during exploration and geological mapping. Subsequently, 1:50,000-scale mapping of Kiddie and Mungal (2000) greatly improved knowledge of this intrusion. Their report is probably the most comprehensive work on Kyak that has been done to date. The Baie Kyak Intrusion was also studied during the summer 2017 regional mapping work by Bilodeau and Caron-Côté (2018).

The Baie Kyak Intrusion (pPkya) is the single kilometre-wide intrusion in the axial plane of the Roberts Synclinal, north of Kangirsuk. It consists of a stock of mafic rocks of variable composition (pPkya1) and, locally, ultramafic rocks (pPkya2). The intrusion is characterized by its compositional and structural heterogeneity. Some sectors are composed of bedded and homogeneous lithologies, while others are heterogeneous, containing several lithological variations (crosscutting, enclave or injection) reflecting polyphased magmatic evolution. Rocks generally have massive textures, magmatic bedding and, locally, NW-oriented low foliation with steep dip conformable with the regional fabric measured in the Roberts Synclinal.

Kiddie and Mungal (2000) established a magmatic stratigraphy with a polarity towards the SW. They separated the Kyak into three “series”: lower, median and upper. The lower series consists of mafic and ultramafic rocks corresponding to the base and NE portion of the intrusion. It is characterized by its lithological heterogeneity and shows a heterogeneous deformation assemblage that may be affected by the Virgin Deformation Zone established by Bilodeau and Caron-Côté (2018). The median series is at the heart of the intrusion and consists of a variety of mafic rocks. This series is bedded and shows modal variations of centimetric to decametric thickness. Kiddie and Mungal (2000) observed that centimetric bedding is discontinuous over distances of a few metres and suggest that this bedding may have been generated by either magmatic or metamorphic processes. Decametric bedding is continuous over decametric distances and appears to be the product of magmatic processes. According to kiddie and Mungal (2000), there appears to be a shift from the base to the top of the median series from more melanocratic to more leucocratic beds. The upper series is the top and the SW portion of the intrusion. It overlies the median series and has been described as diorite by Kiddie and Mungal (2000).

The Kiddie and Mungal magmatic series (2000) can be correlated with the subdivisions and descriptions made by Bilodeau and Caron-Côté (2018) as shown below. The lower series correspond to subunits pPkya2 and pPkya2a, the median series appears to correspond to the gabbronorite and pyroxene-hornblende gabbronorite of unit pPkya1, whereas the upper series could be correlated with hornblende gabbro (unit pPkya1b).

The Baie Kyak Intrusion 1 (pPkya1) consists in order of importance of: 1) gabbronorite, 2) pyroxene-hornblende gabbronorite, and 3) hornblende gabbro. These rocks are leucocratic to melanoratic and fine to coarse grained. Constituents are plagioclase, orthopyroxene, clinopyroxene, hornblende, actinolite-tremolite and epidote. Compositional variations are expressed by variations in percentages of clinopyroxene, orthopyroxene and brown hornblende. In microscopy, plagioclase usually appears highly epidotitized and locally partially sericitized. Pyroxenes are partially or completely replaced by actinolite or tremolite and, more locally, by serpentine or chlorite. Hornblende is brown and of magmatic origin, with no evidence of recrystallization or replacement of other minerals.

Gabbronorite is composed of plagioclase, orthopyroxene and clinopyroxene. It is generally mesocratic, massive, homogeneous and fine grained. Magmatic bedding is generally observed in this lithology, where beds of metric thickness alternate between leucocratic and melanocratic facies. This rock is locally intruded by pyroxene-hornblende gabbronorite or forms decimetric enclaves in the latter. 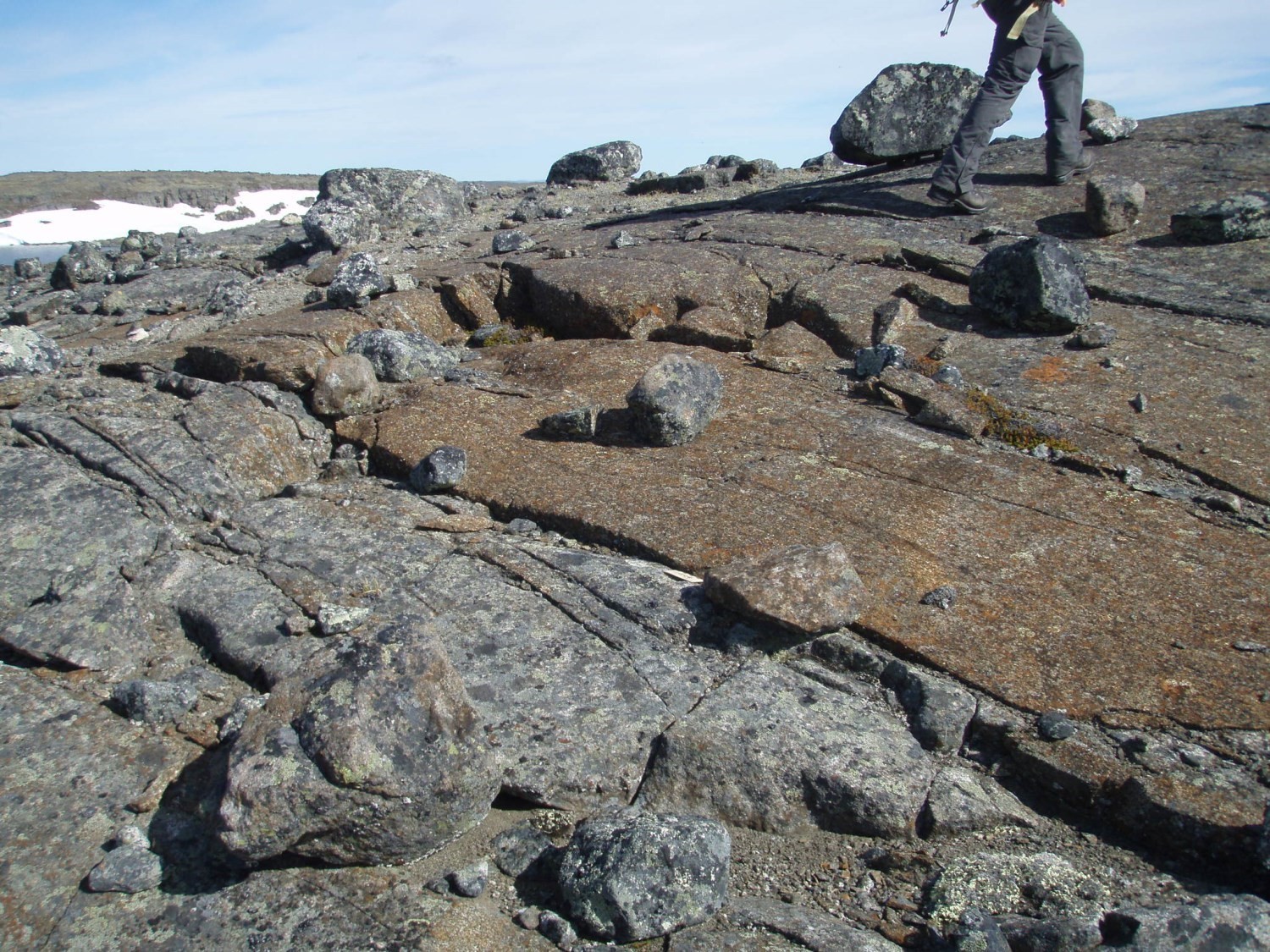 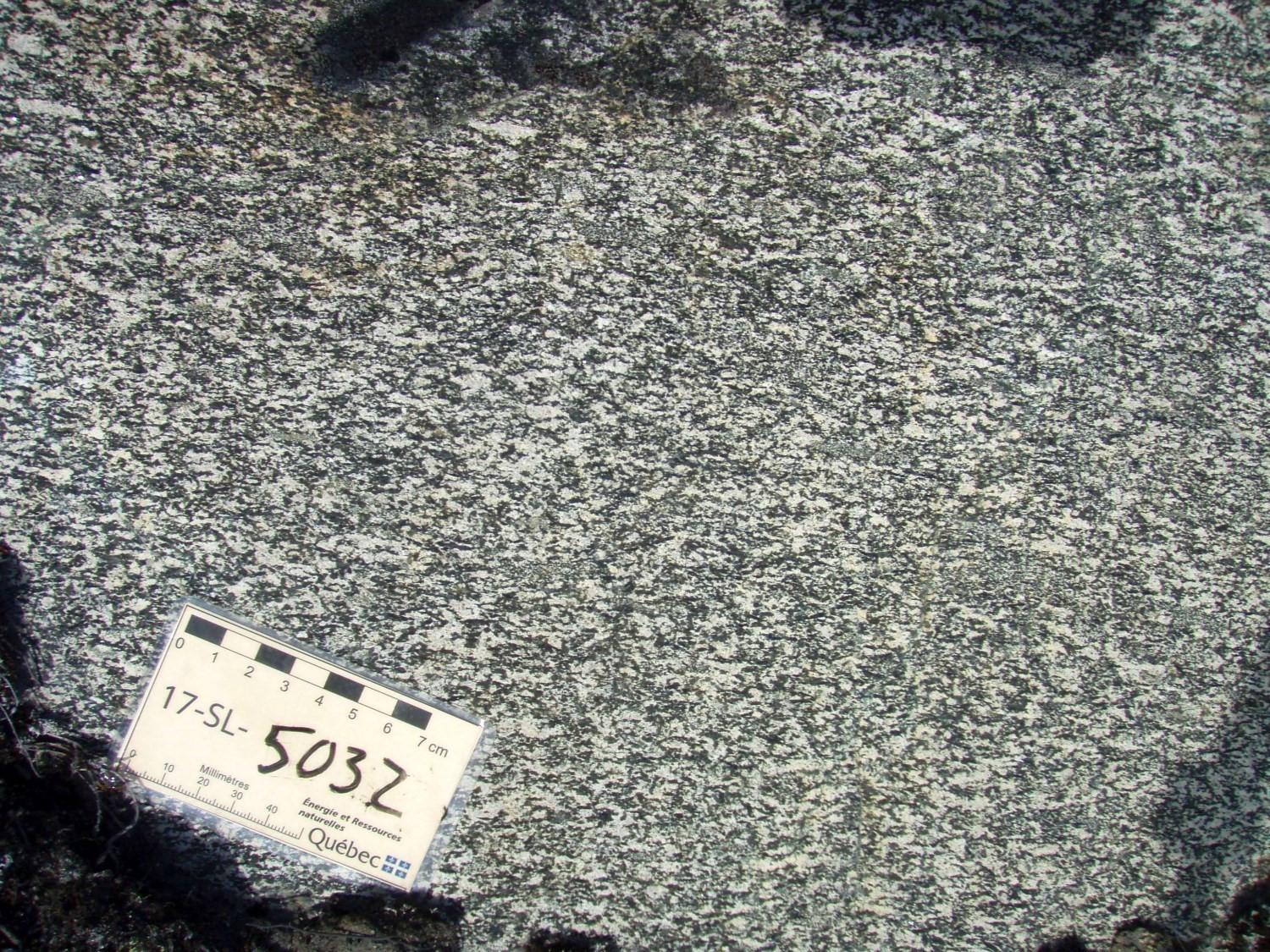 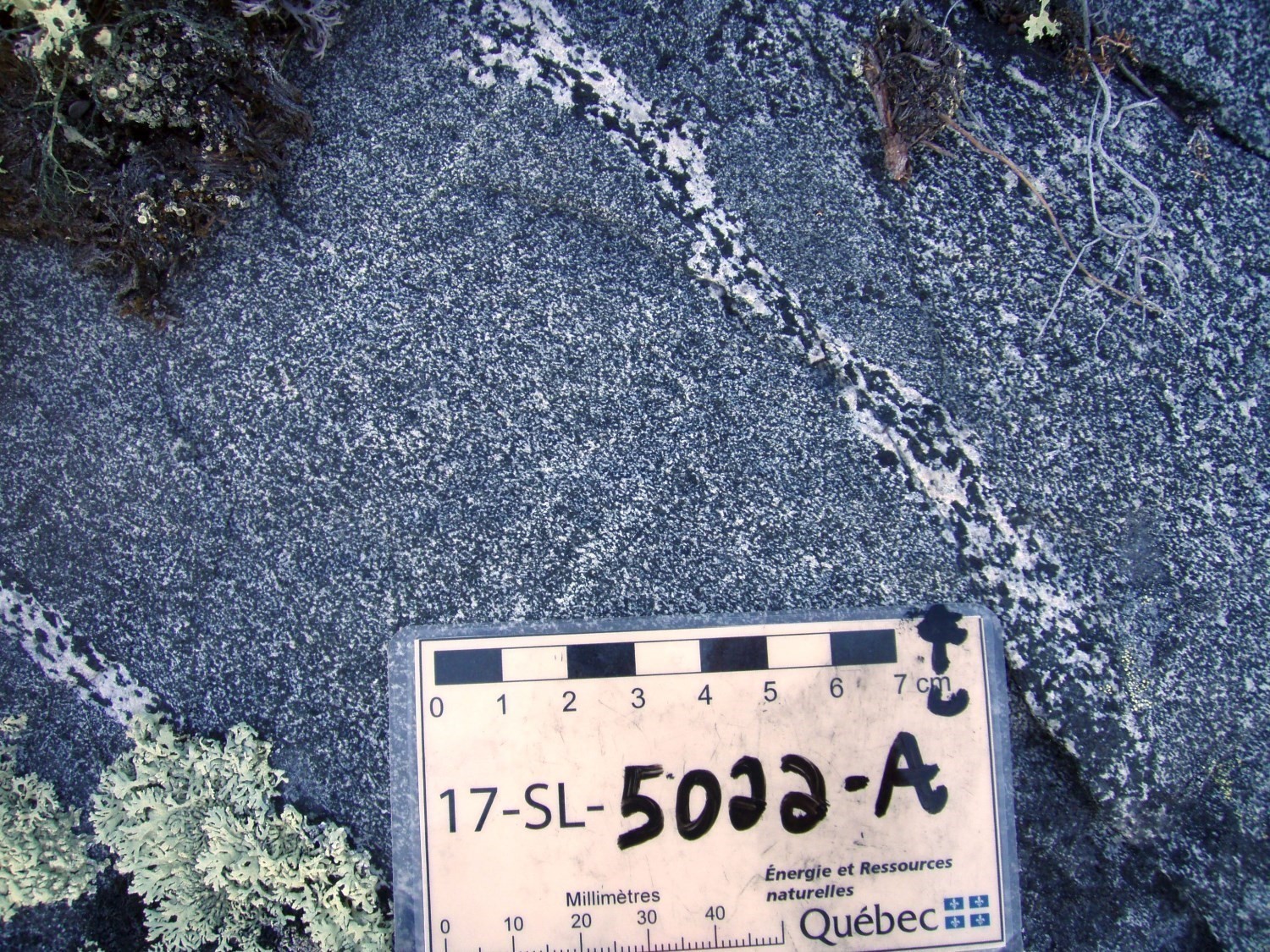 Pyroxene-hornblende gabbronorite is generally composed of plagioclase, orthopyroxene, clinopyroxene and hornblende. It is mainly heterogranular, with its grain size ranging from medium to coarse, giving it a heterogeneous appearance. It is more locally homogeneous and massive. Most of it has mesocratic facies, but there are also leucocratic and melanocratic facies in a few places. Locally, this rock intrudes or contains enclaves of the hornblende-free gabbronorite. It is also locally intruded by hornblende gabbro. Under the microscope, hornblende is coronitic, interstitial or in « mesh texture ». It also appears locally in poikilitic form and contains plagioclase and pyroxene oikocrystals. The hornblende gabbro is composed of euhedral to subhedral plagioclase and hornblende. Fine-grained titanite is an observable accessory phase in microscopy. Gabbro usually has a mesocratic facies, but also appears leucocratic in several places. Grain size is generally coarse to medium. This gabbro is in some places the main lithology, but it is mostly a late phase that intrudes into the lithologies described above. Intrusions are generally parallel to magmatic bedding, but also cut it in several places. In these cases, the intrusions fracture the gabbronorites, giving them an appearance of intrusion breccia.

Hardy (1976) observed a petrographic zonation at the scale of unit Kyak 1. Rocks on the edge of the intrusion contain up to 55% hornblende with magnetite and olivine inclusions while those in the centre contain only 2%, instead containing clinopyroxene and orthopyroxene inclusions. This subunit consists of a few lenses of hectommetric thickness and kilometre length. These lenses are located at the intrusion’s centre and scattered along a four-kilometre axis oriented NW-SE. This subunit is distinguished by the presence of several decimetric mafic dykes that cut unit pPkya1 gabbronorite. These dykes are blackish grey and contain magnetite. They are massive and fine grained. Similar to the previous subunit, this subunit consists of hectometric and kilometre-long lenses located at the centre of the intrusion and dispersed along a five-kilometre NW-SE axis. It is distinguished by the presence of 5 to 10% lenticular hornblende horizons. These horizons are black, centimetre thick and decimetric long. They are predominantly composed of subhedral to euhedral coarse-grained hornblende. Plagioclase lherzolite occurs as hectometre-thick and kilometre-long lenses at the northeast edge of the intrusion, near the base of the Kyak’s stratigraphy. It is mostly composed of clinopyroxene, orthopyroxene and olivine. It generally contains fewer than 10% of plagioclase. Secondary and accessory phases are actinolite-tremolite, brown hornblende, epidote, carbonate, pyrrhotite, chalcopyrite and pentlandite. Lherzolite is medium grained and more locally coarse grained, usually euhedral to subhedral. Olivine is partially serpentinized. Fractured olivine crystals with serpentine or very fine-grained talc alteration are generally observed in fractures, as well as serpentine containing olivine relics. Olivine is locally in inclusion in a poikilitic pyroxene. Plagioclase is usually epidotitized and more locally carbonatized. Hornblende is only present very locally, interstitially or in mesh texture. This subunit consists of a hectometric olivine melanogabbronorite lens located southwest of the plagioclase lherzolite lenses. It is stratigraphically located above these ultramafic lenses. It is distinguished from mafic rocks of the main pPkya1 unit by the presence of olivine and its melanocratic appearance. It contains 70% clinopyroxene and orthopyroxene, 15% olivine, 14% plagioclase and 1% magnetite. Its petrographic characteristics are similar to those of the plagioclase lherzolite. It shows an orange-brown alteration patina. It is homogeneous, medium grained and has a massive texture. In microscopy, olivine is slightly serpentinized in fractures. It is also in inclusion in poikilitic pyroxenes. 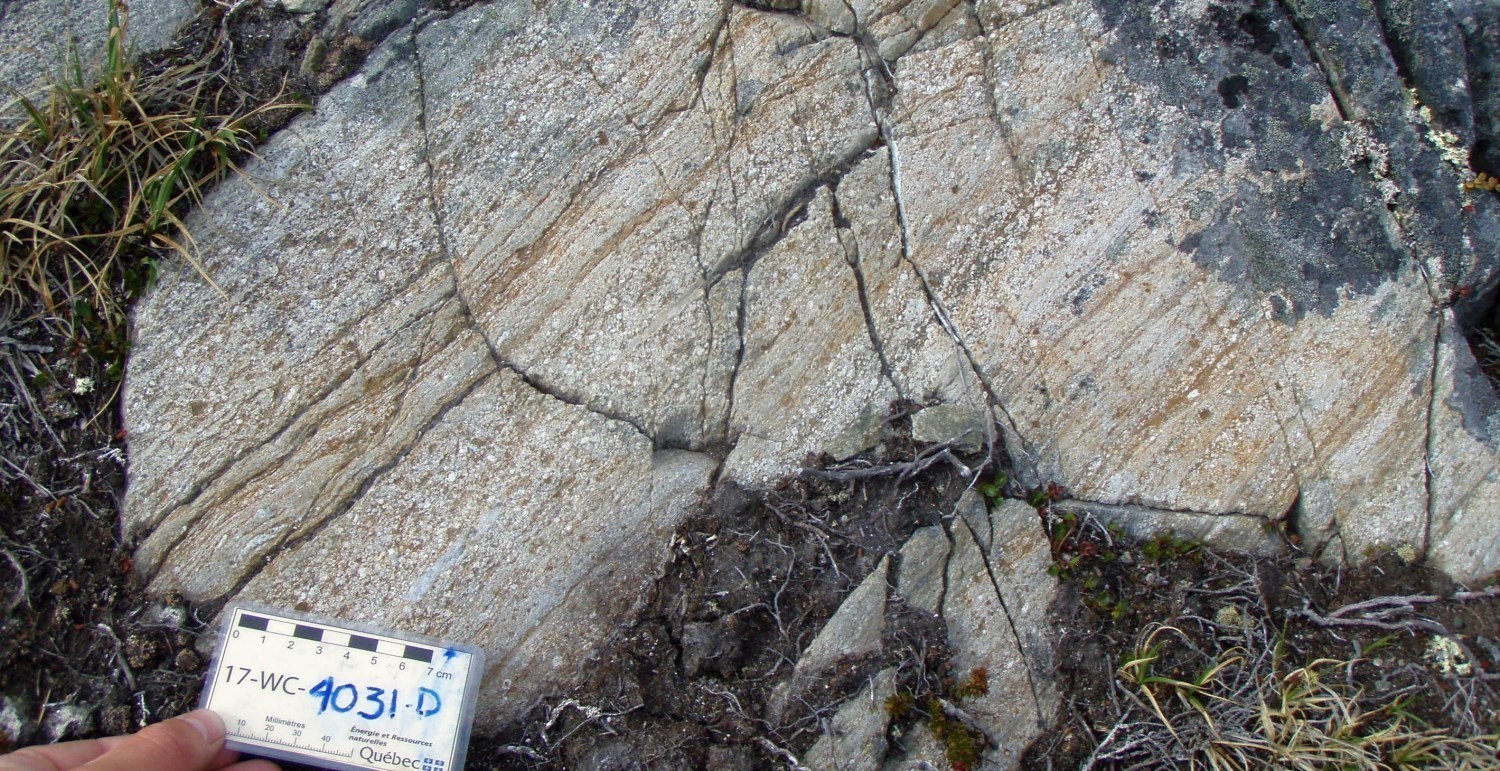 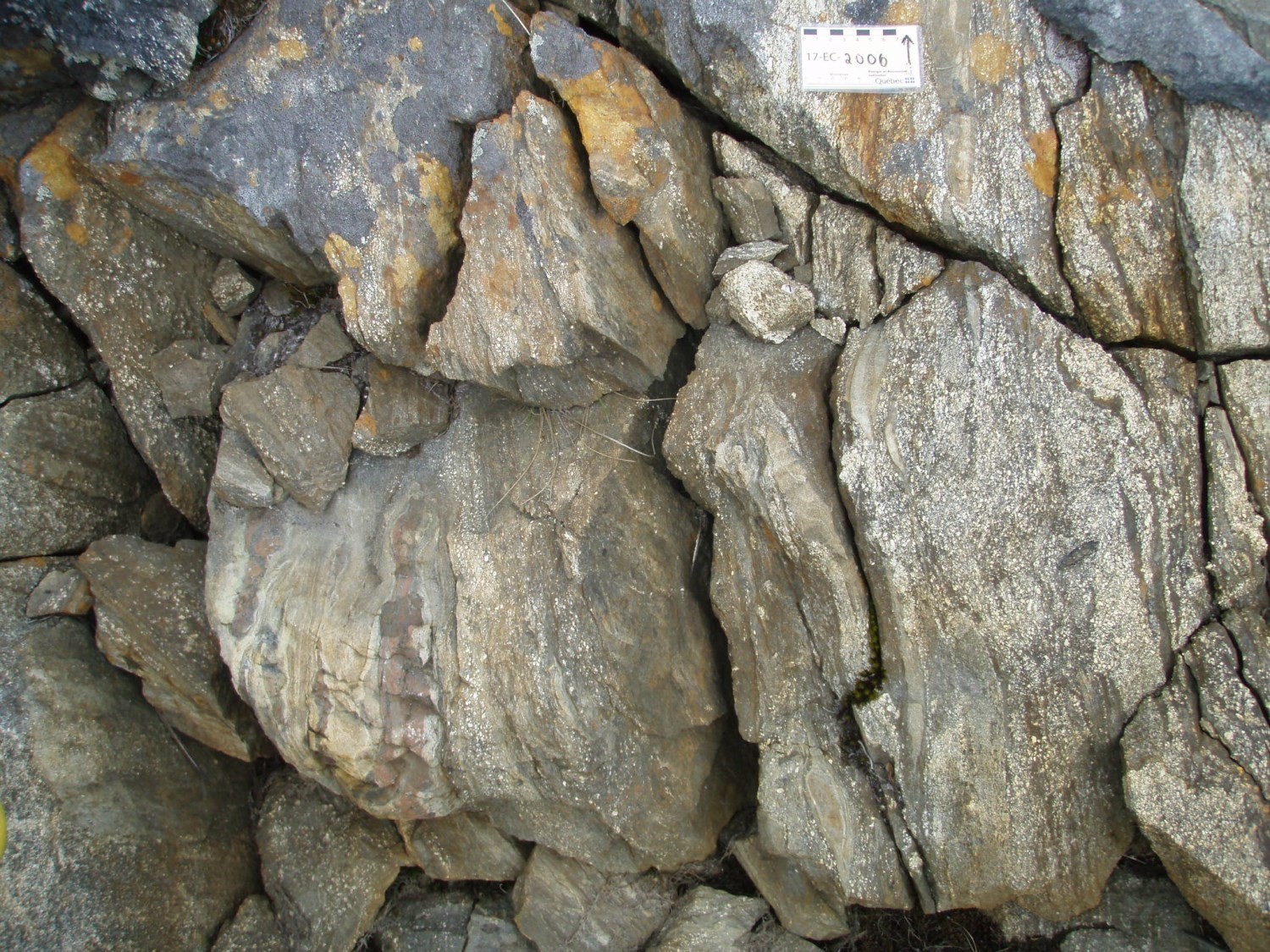 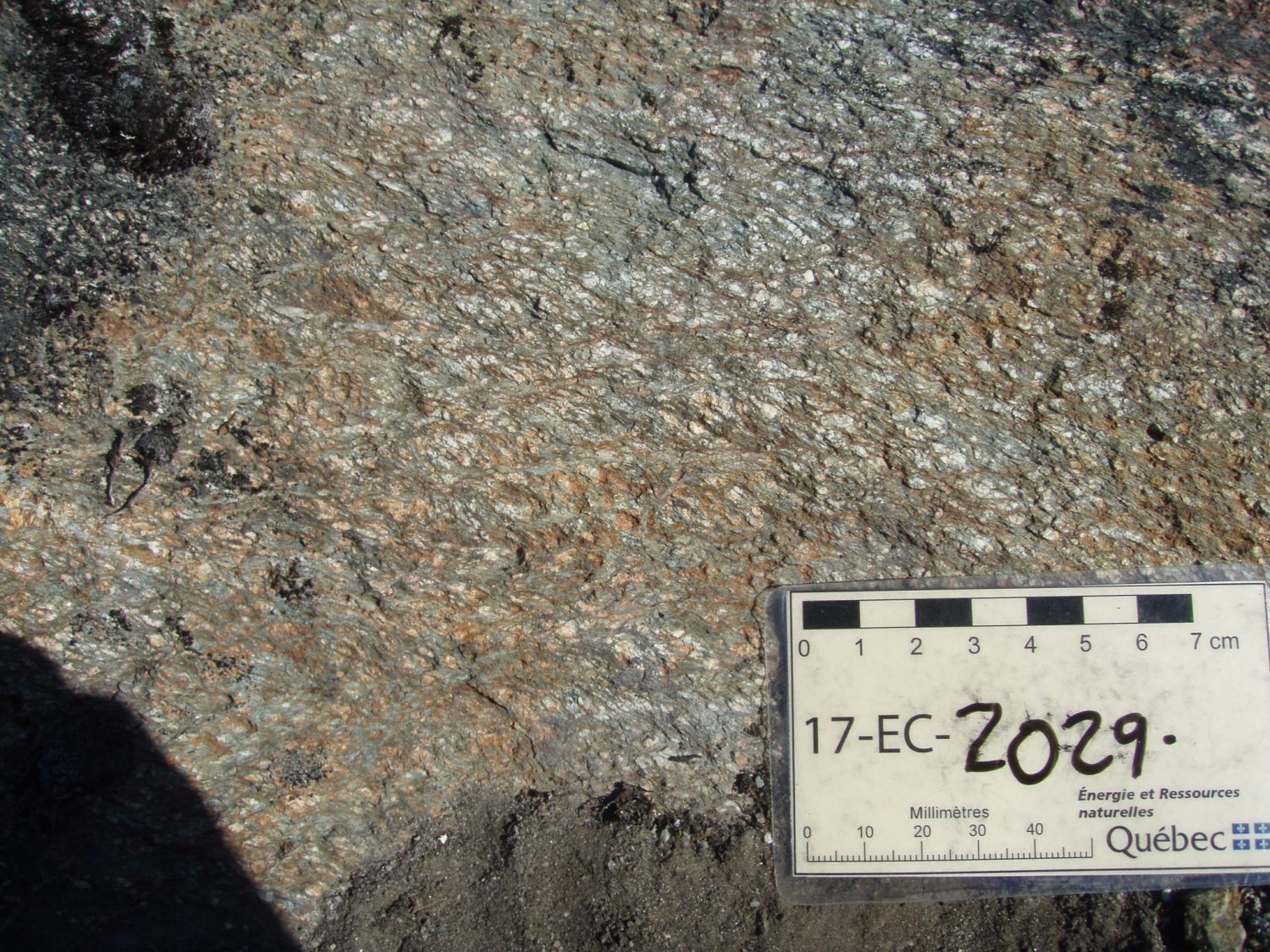 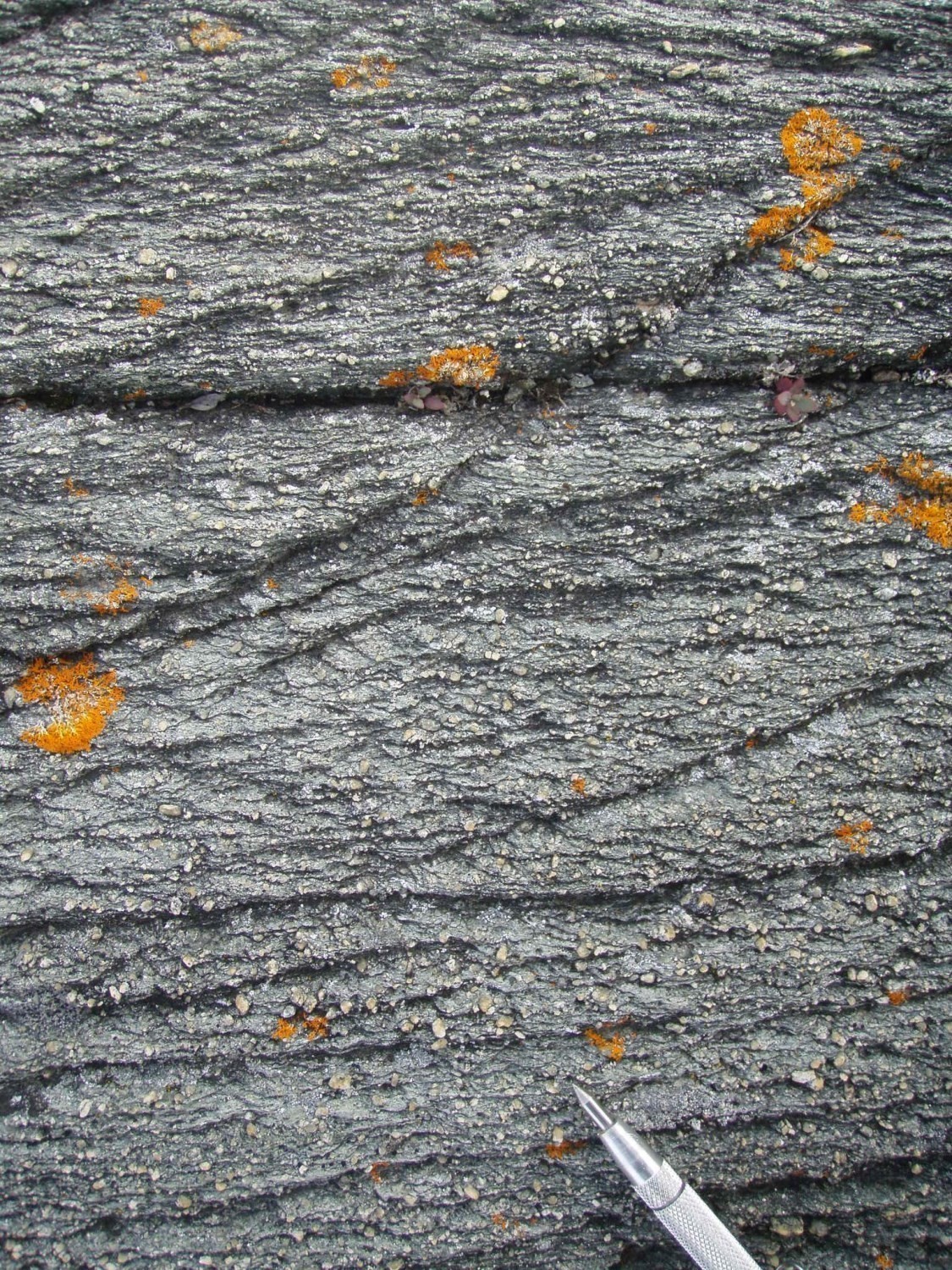 Deformation corridors affect the rocks of the Baie Kyak Intrusion and cause mineralogical and structural changes. These deformation corridors are oriented NW-SE, have a decimetric to decametric thickness, and pass through the NE portion of the intrusion. At these locations, the rocks are composed of medium and coarse-grained plagioclase porphyroclasts. Hornblende units also contain fine and medium-grained plagioclase porphyroclasts. The matrix is foliated and has millimetric banding composed of biotite and very fine-grained plagioclase. The Kyak rocks affected by the Virgin Deformation Corridor at the SE end show similar petrographic characteristics, but appear more altered and have a different matrix in terms of mineralogical composition. In microscopy, the matrix of these rocks appears as anastomosed millimetric bands composed dominantly of chlorite and in lower proportions sericite and carbonate. Plagioclase porphyroclasts are moderately to highly sericitized, carbonatized and epidotitized. They also contain titanite locally.

The Baie Kyak Intrusion is located southeast of the Roberts Synclinal at the Labrador Trough’s northern end. It is located north of the Arnaud River and west of Kyak Bay. It is ovoid shaped and elongated along a NW-SE axis. It is approximately 14 km long and 6 km wide. A few satellite outcrops with strong petrographic similarities suggest that the Kyak intruded itself out of the ovoid intrusive body in the northwest (outcrop 17-WC-5051) or that part of Kyak was sheared in the southeast (outcrops 17-EC-2023 and 17-EC-2141).

The Baie Kyak Intrusion intrudes the Hellancourt Formation’s volcanic and sedimentary rocks and occupies the axial part of the Roberts Synclinal. The edges of the intrusion have evidence of deformation, namely minor shears and marked schistosity. Contact at the northeast edge of the intrusion is sheared off by the Virgin Deformation Corridor, causing some dextral offsetting without stratigraphic gap. Locally, ultramafic rocks of unit pPkya2 also cut other Kyak units and intrude into one of these deformation corridors.