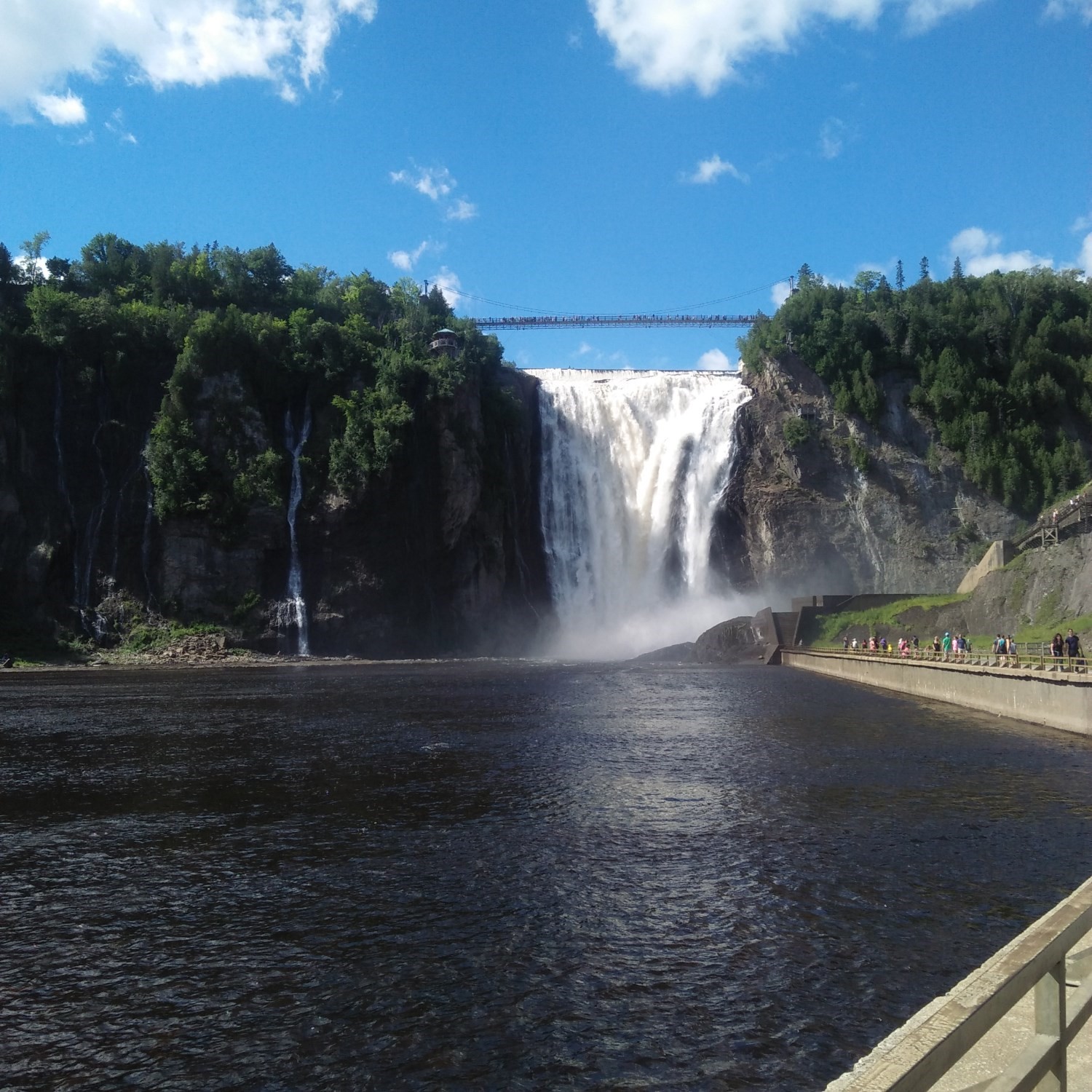 This unit is named after the city of Utica, New York, where it was first identified (Emmons, 1842). According to Globensky et al. (1993): “The term Utica was used by Emmons (1842) to mean a black shale between the Trenton and Lorraine in the Utica basin in the United States. In Canada, Logan (1863), Ami (1900) and Raymond (1913b) referred to the “Utica shale” as an analogous sequence. Clark (1947) introduced the term “Utica Group”, in which he placed the Lotbinière Formation, located between the Trenton Group and the Leclercville Formation, at the base of the Lorraine. Clark and Globensky (1973) called “Lotbinière” all shales of Utica age in the Portneuf area. Clark and Globensky (1976a), in agreement with the redefinition of the Utica Shale at the type locality in New York State, proposed that the term Lotbinière be restricted to flyschic rocks related to Appalachian sedimentation, and that the name Utica applies to typical shale of platform sedimentation (St. Lawrence Lowlands).” 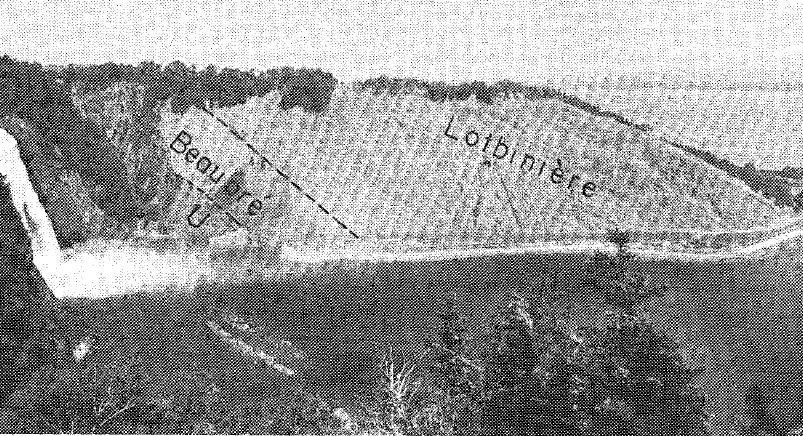 The current Lotbinière Formation, which belongs to the Sainte-Rosalie Group, is locally overlying the Utica Shale (Globensky, 1987; Lebel and Hubert, 1996; Amortegui et al., 2010; Hubert et al., 2012), for example at the Montmorency Falls in the Quebec City area.

Based on drilling data (logging, mineralogical and geochemical composition), Thériault (2008a, 2008b, 2009, 2012a, 2012b) subdivided the Utica Shale into two separate informal units, the upper Utica Shale and the lower Utica Shale.

The Utica Shale has strong potential for natural gas, as indicated by the numerous drilling performed since the late 1800s (see Thériault, 2012a b). 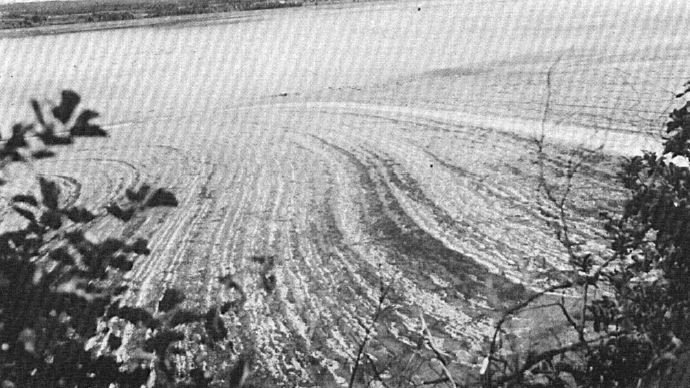 In general, the Utica Shale is defined as a mixture of calcareous and bituminous shale, and argillaceous limestone covering Trenton limestones. According to Bertrand and Thériault (2010), they are strictly carbonate-rich marls. One of its features is that, when broken, the Utica Shale smells of oil (Clark and Globensky, 1973). Shale appears black, but is rather dark grey to brown (Logan et al., 1863). The rock is interstratified with limestone dark in fresh exposure and dark grey to whitish in altered surface (Clark and Globensky, 1975). At each 2-3 m interval, the Utica Shale also contains thin beds of calcilutite up to 15 cm thick. The lithology is laminated throughout its extent (Belt et al., 1979).

According to Globensky et al. (1993): “The Utica Shale is dark brown calcareous and associated with argillaceous limestone having a petroleum odour. Thin interbeds of calcilutite and grey to greyish yellow are also found scattered throughout the sequence. In NE Quebec City and in the Neuville area, entire beds and blocks have slipped inside the Utica Shale. These beds and blocks consist of massive argillaceous limestone.” 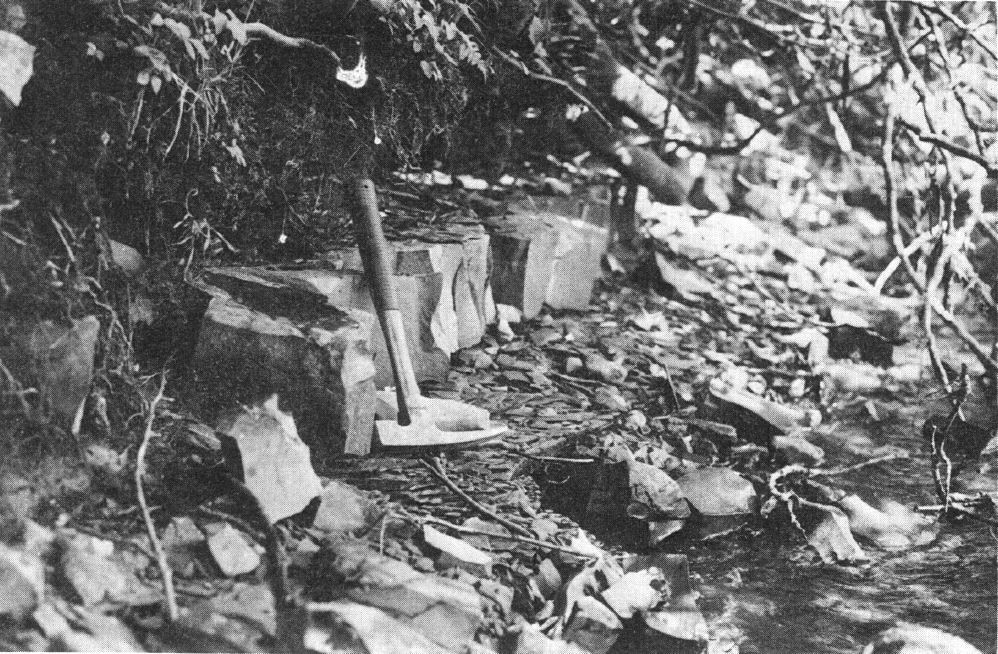 Shale contains 14-26% carbonate (Belt et al., 1979), while the remaining fraction is a terrigenous mud that originates from Appalachian erosion (Globensky 1987). Some quartz and mica crystals are visible to the naked eye in shale, although they are generally indistinguishable. The abundance of detrital mica gives shale a brighter appearance than limestone (Clark and Globensky, 1975). Shale is very fine grained (probably caused by anoxic dissolution) and is rich in organic matter and graptolites, but may also contain trilobites and cephalopods. These characteristics, combined with the absence of bioturbation, suggest a medium to very deep depositional medium (Belt et al., 1979).

According to Logan et al. (1863), an outcrop (approximate location) along the Sainte-Anne River displays the most complete section of the Utica Shale for almost 96 m, from bottom to top:

Shale can be observed up to NE Ontario, where it corresponds to the Witby Formation, and into New York State (Globensky, 1987). In Quebec, the Utica Shale extends along the north shore of the St. Lawrence River from Quebec City to the south shore of Montreal and deepens towrad the SE to a depth of ~2.5 km along the Logan Line, covering a surface and sub-surface area of ~10 000 km2 (Thériault, 2012b).

According to Globensky et al. (1993), “The thickness of the Utica shale remains fairly constant at 30 m in the Quebec City area; it reaches 80 m in Neuville. South of Montreal, in the Saint-Jean-Lacolle area, the thickness of the Utica is estimated at 1300 m. The Utica Shale occurs mainly in the immediate area of Montreal, as well as from the city of Sainte-Anne-de-la-Pérade to the Sainte-Anne du Nord River and the Baie-Saint-Paul area, NE of Quebec City. It also outcrops NE of Terrebonne, at Île des Soeurs, around the municipality of Candiac, and north of Lake Champlain along a NE strip extending to the Yamaska Mountain.” 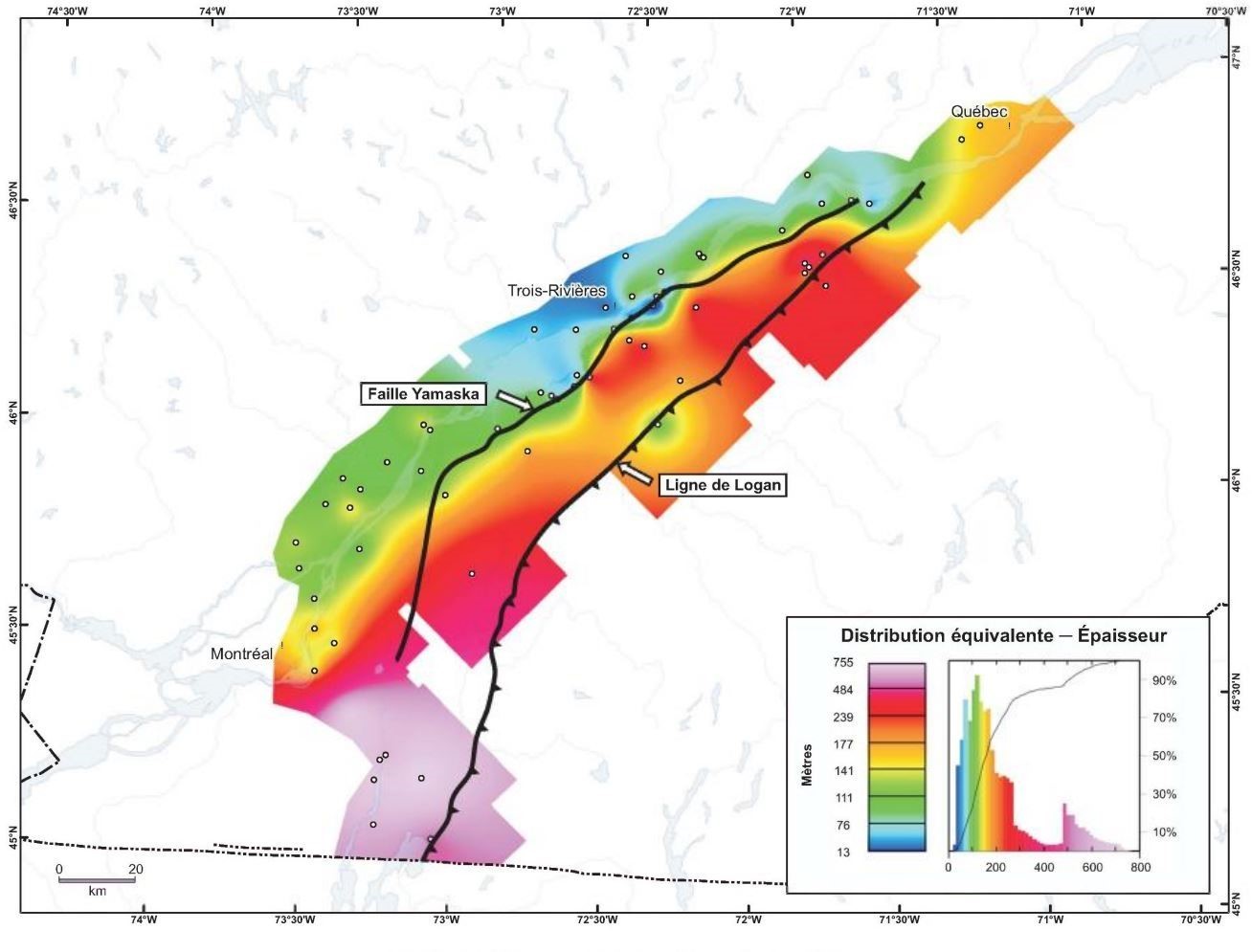 According to Thériault (2012b): “The Utica Shale typically ranges in thickness from 100 to 250 m, reaching up to 750 m in the southern part of the area. From drilling wells, the average thickness of the Utica Shale is estimated to be 105 m west of the Yamaska Fault, increasing to 220 m east of the fault. The average thickness of the Utica in the southern portion of the St. Lawrence Lowlands (Richelieu and Lake Champlain area) is around 640 m.”

The depth of the Utica Shale increases abruptly along the Yamaska Fault from ~800 m deep to ~1200 m east of it (Thériault, 2012b). The base of the Utica Shale, which corresponds to the roof of the Trenton Group (transitional contact), displays similar deepening to the SE, from ~900 m deep west of the Yamaska Fault to ~1400 m to the east, to finally reach a depth of nearly 3000 m along the Logan Line (Thériault, 2012b).

Logan et al. (1863) mapped the Utica Shale over a thickness of 98 m at the reference outcrop between the fall of the Sainte-Anne River and the mouth of the Jean-Larose River. At the Sainte-Anne-du-Nord River, the shale is visible over a thickness of 80 m, while at Montmorency Falls the thickness is estimated at 60 m but reduced to 30 m by faulting (Belt et al., 1979). Near Lake Champlain, the Utica Shale is >120 m thick (Globensky, 1987). InTrois-Rivières, the unit thickness was observed and calculated between 22 and 30 m (Clark and Globensky, 1976). 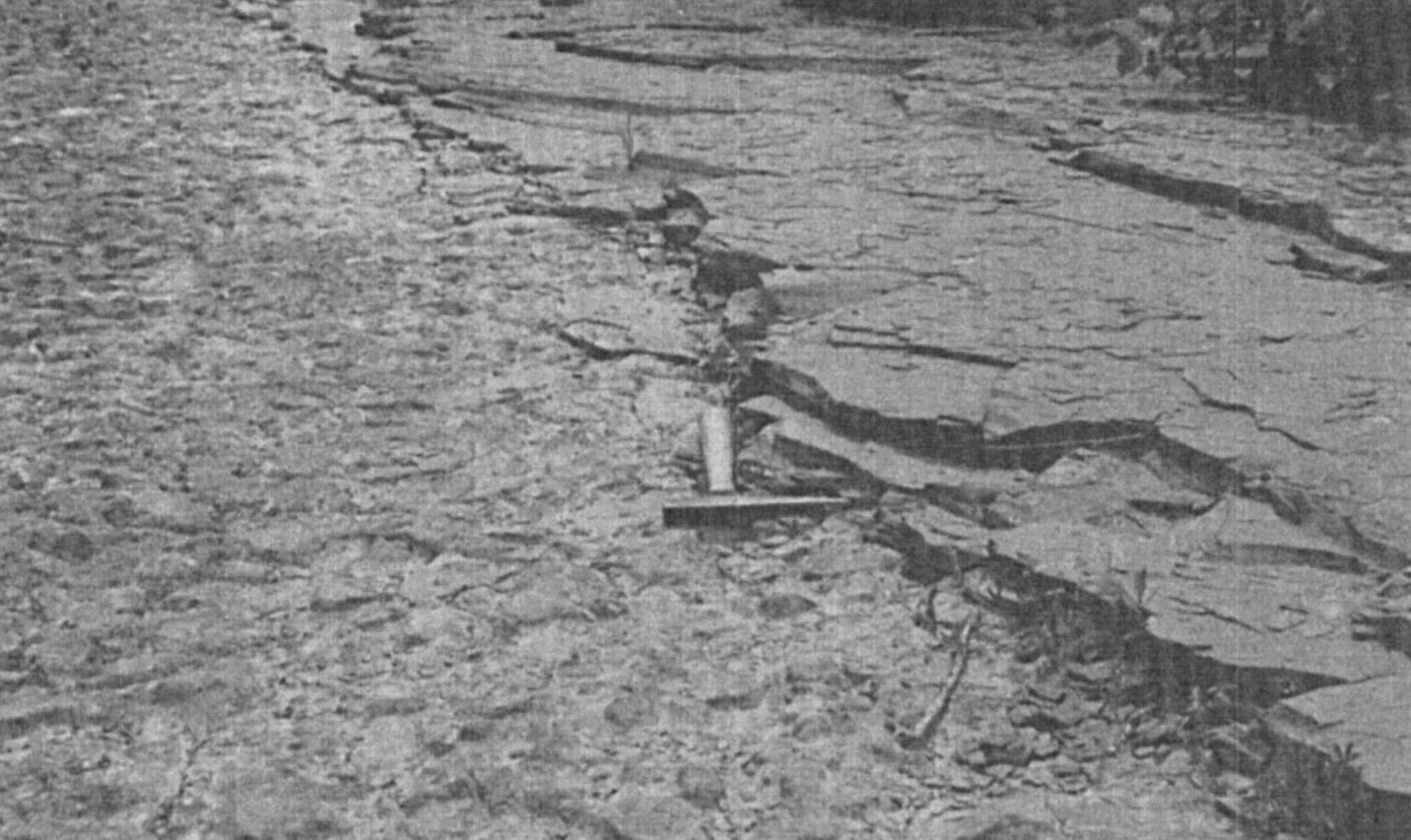 Contact between the Utica Shale on the Trenton Group is generally gradual and marked by a gradual increase in the amount of calcareous shale within Trenton Group limestones (Thériault, 2012b). This transition is visible at Delisle Creek, near Neuville, where orange magnesian micritic limestone of the Trenton Group is interstratified in the Utica Shale. Globensky (1987) named the gradual contact “Delisle Member”, now obsolete. Thériault (2012b) places the boundary between the two units where the proportion of calcareous shale interbeds is >50%.

Contact can be sharp locally, representing an unconformity between the two units. The unconformity at Grondines is marked by pyritic material (Clark and Globensky, 1975).

To the NE, the Utica Shale gradually change to the Saint-Irénée and Lotbinière formations (Belt et al., 1979). The Utica Shale is also in fault contact with gneiss of the Grenville Province, particularly at the Neuville normal fault (St-Julien, 1995).

Globensky et al. (1993) add: “The Utica Shale is a classic example of a diachrone lithological unit. In the Lower Mohawk River Valley and Lake Champlain area, it overlies almost unconformably the lower units of the Trenton Group and, towards the NW, in the Upper Mohawk River Valley and Montreal area, it gradually becomes younger and is separated from the higher units of the Trenton [Group] by an unconformity. In the Quebec City area, the Utica [Shale] rests unconformably on Trenton limestone (Riva et al., 1977).” 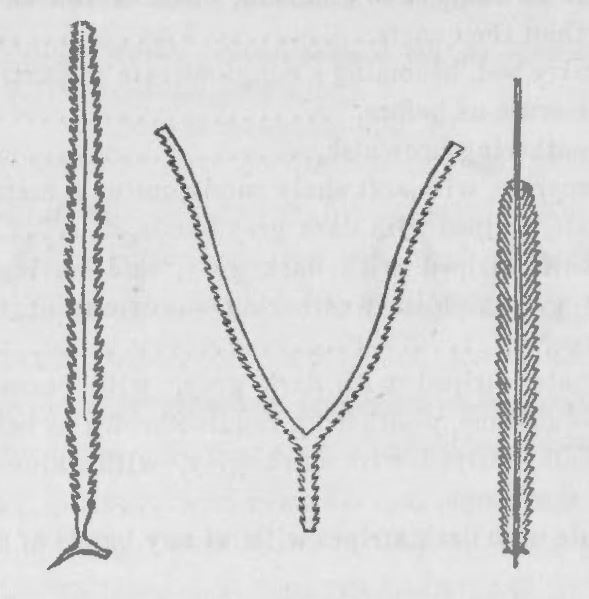