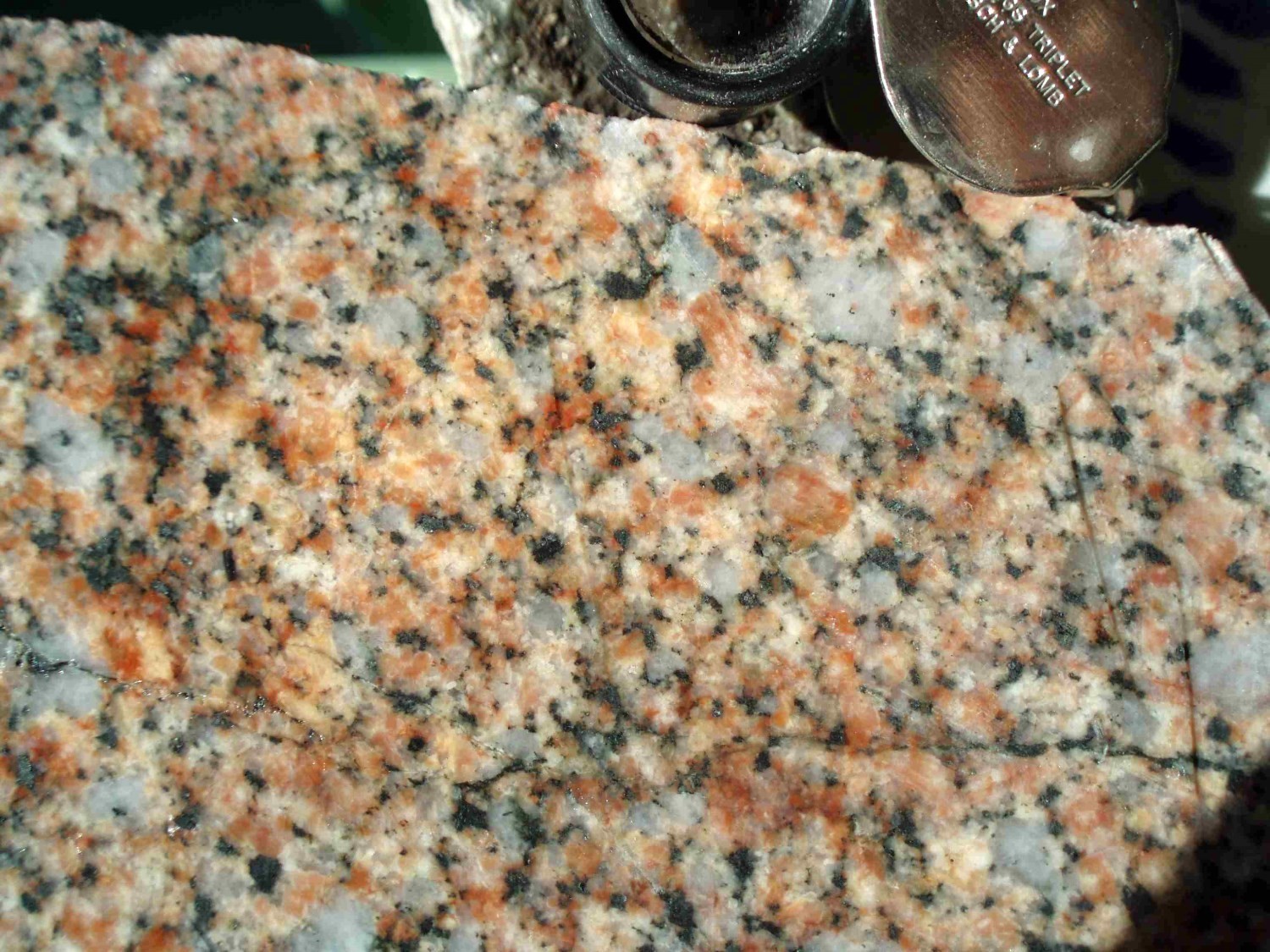 Bell (1903) described outcrops of fine-grained pinkish grey granite and gneiss on the banks of the Bell River and its tributaries (extreme NE of sheet 32F05), which he attached to a general gneiss unit. In the map of Tanton (1916), the Marest Pluton (not named) is included in a strip of granite and gneiss oriented globally E-W. In 1940, Freeman established the eastern limits of the Marest Pluton, still unnamed, and described it as a package of granite, granodiorite in part gneissic, diorite and quartz diorite. In the early 1950s, Bélan (1950) and Maurice (1950) conducted reconnaissance surveys in the Marest Pluton area, but did not formally characterize it. In 1958, Imbault and Remick drew the intrusion in its entirety, but mentioned granitic rocks without any other precision. In the update of Remick (1964), the description is further elaborated: granite, gneissic granite, granitic gneiss, and some partings of syenite, diorite and hybrid rocks.

The first mention of the name Marest appears in the sheet 32E08 geoscience compilation maps of Masterman and Delagrave (1980, in Mer, 1984), which mention the « Marest Granite » to which they assign the code « 1G » (granite); this lithology remains valid to date in this sheet (see MNRF, 2010a). Hocq (1982) called the intrusion « Taibi Lake Pluton » and described it as a granitoid. In 1990, Dussault introduced the name “Marest batholith” and described it in the Taibi Lake area as a porphyritic hornblende-biotite quartz diorite, and further south as a biotite granodiorite. On this basis, Grant (2000, in MNRF, 2010b) distinguished three informal units: tonalite (Amar), porphyritic quartz diorite (Amar1) and biotite granodiorite (Amar2).

The input of new data, including sonic drilling data, and the revision of existing data in sheets 32F03 and 32F04, allowed Rhéaume (2008, in MRNF, 2010b) and Rhéaume et al. (2010) to specify the Neoarchaean age of the intrusion and to separate different lithologies: biotite-hornblende tonalite and biotite granodiorite (nAmar1), and biotite granodiorite (nAmar2). In 2013, as a continuation of the work begun by Rhéaume, Deschênes added three additional units, which were broadcast only on the SIGÉOM interactive map: granite (nAmar3), diorite (nAmar4) and quartz monzodiorite (nAmar5). Finally, Guemache (2020) reviewed the available data and simplified the stratigraphic division of the intrusion by recognizing four informal units (nAmar1 to nAmar4), which are described below.

The name of the unit, recently renamed « Marest Intrusive Suite », comes from the township of Marest located NW of the town of Lebel-sur-Quévillon, which refers to Jesuit father Pierre-Gabriel Marest (1662-1714). 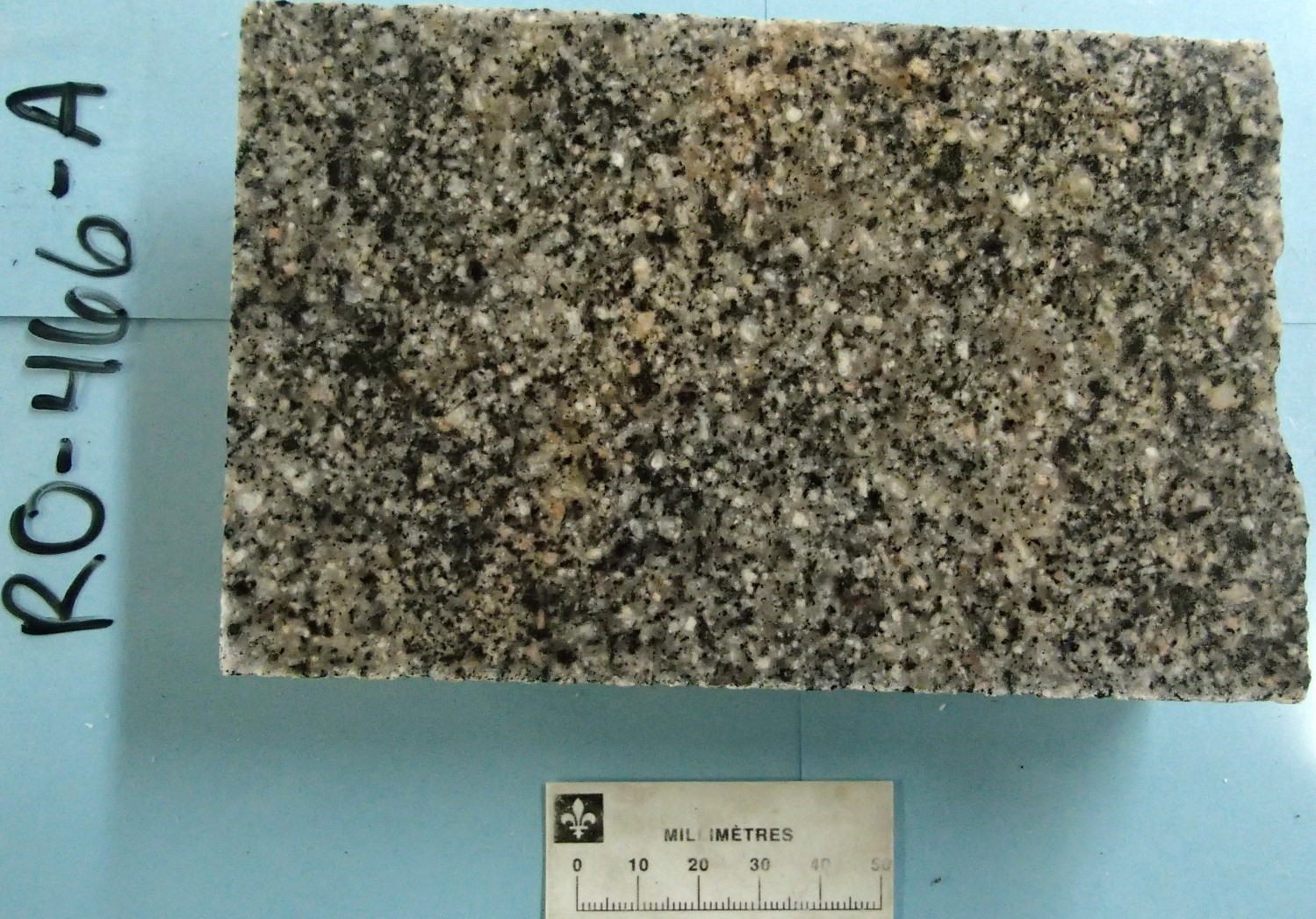 Unit Amar1 consists of massive biotite ± hornblende granodiorite and tonalite, which, according to Rhéaume et al. (2010), also display coarse magmatic banding. It is the main unit of the Marest Intrusive Suite and its contour can be easily delineated on aeromagnetic maps (Keating et al., 2010; Keating and d’Amours, 2010). Observations from sonic drilling and outcrop descriptions (Auger and Longley, 1939; Beland, 1950; Hocq, 1982) allow to characterize this unit. The rock is homogeneous, leucoratic to mesocratic, usually massive, locally foliated (average 35° AC) and medium grained, rarely coarse grained. It is K-feldspar porphyraceous in places. Generally white to grey, this lithology locally has a beige colour due to hematitization of feldspar. Amphibolite enclaves are reported. 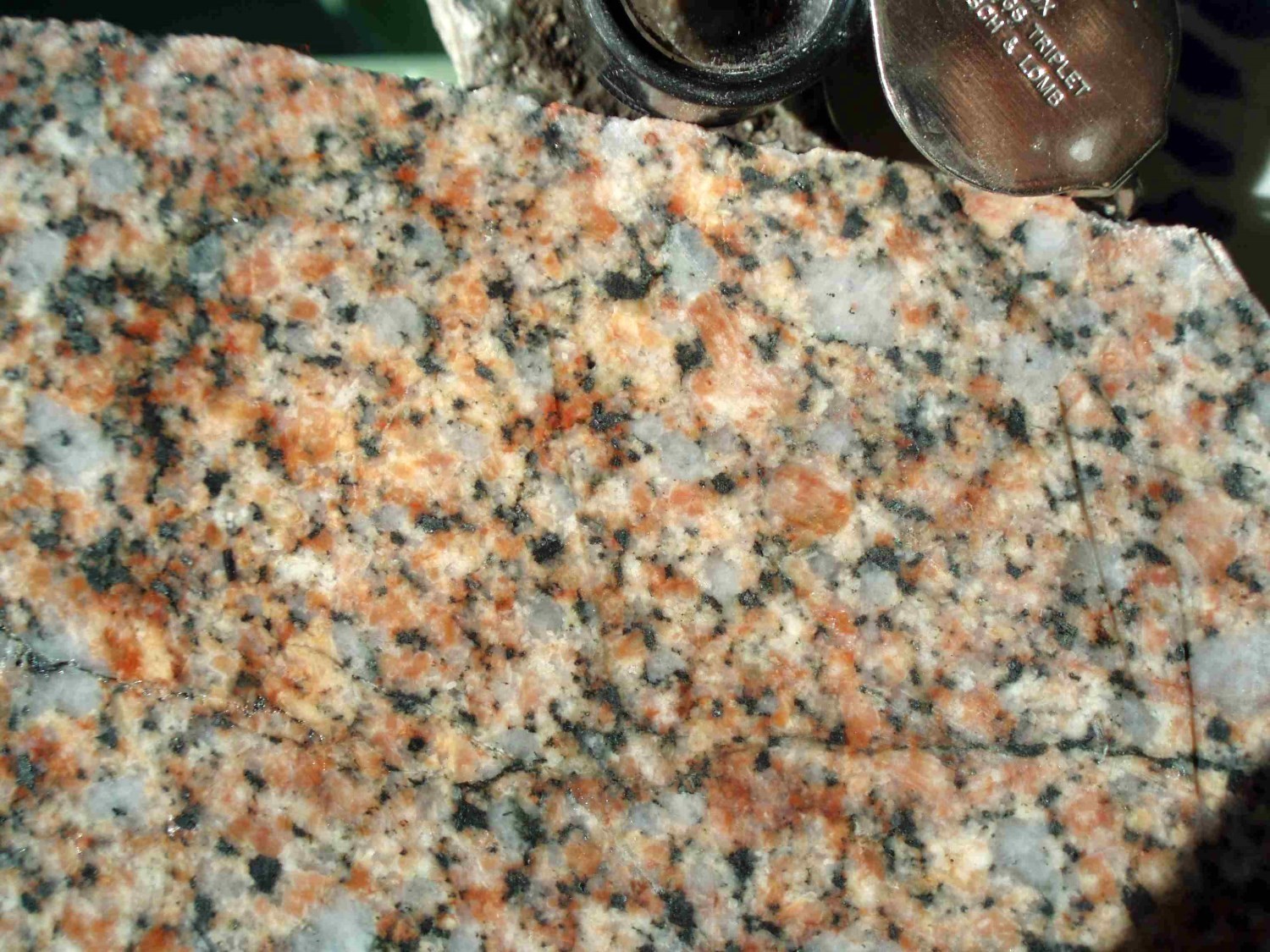 Unit nAmar2 is a circular intrusion ~15 km in diameter consisting, according to Rhéaume et al. (2010), of massive biotite granodiorite characterized by magmatic banding. According to Rhéaume et al. (2010), this unit cuts unit nAmar1 and is therefore later. Analysis of data from sonic drilling indicates that unit nAmar2 extends over a surface area that is half that of the map of Rhéaume (2008, in MRNF, 2010a). Overall, the rock is mesocratic to leucoratic, medium grained, rarely coarse grained, generally massive and homogeneous, but can be locally foliated and heterogranular. Rhéaume et al. (2010) note that the white to grey colour of the rock grades to reddish pink from east to west with the appearance of magnetite and hematite at the expense of ferromagnesian minerals. This phenomenon is accompanied by more or less significant epidotization.

Unit nAmar3 is defined solely from mostly summary historical descriptions of some localized outcrops along the eastern (Maurice, 1950) and western (Gauthier, 1992) edges of the intrusion. To the east, it is described as biotite granite or granodiorite, to the NE as hornblende granite or granodiorite, and to the west as magnetite granodiorite or granite displaying in places a porphyraceous texture associated with the presence of euhedral K-feldspar phenocrystals. It is possible that with the addition of new detailed descriptive data, unit nAmar3 outcrops will be reassigned, all or part, to units nAmar1 and/or nAmar2. 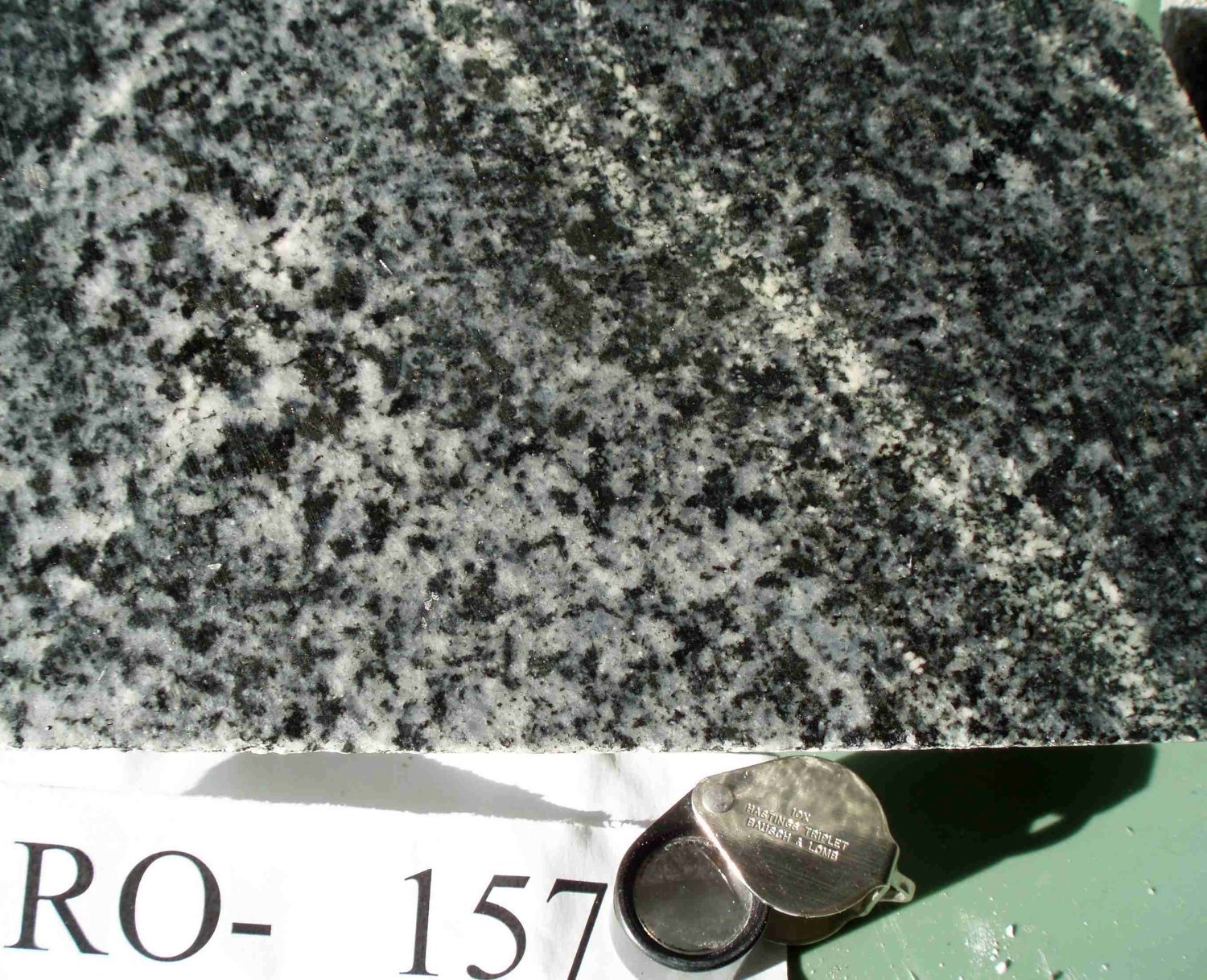 The Marest Intrusive Suite is ~80 km long, along an overall E-W axis, and 45 km wide.

The Marest Intrusive Suite intrudes into the Vanier-Dalet-Poirier Group, which was dated 2722.3 ±1.2 Ma (Rhéaume et al., 2010). It itself is cut by Proterozoic diabase dykes.