The Barraute Pluton appears on the map of Tremblay (1956) covering the Fiedmont area, but it is not a formal unit. Its first formal identification was by McDougall (1965) in the NE portion of sheet 32C05. The author named it the « Barraute Granitic Plug, » referring to this intrusion’s location in the centre of Barraute Township. Beullac (1983) later changed the name to « Barraute Pluton » when mapping the Barraute area, which has been retained since. 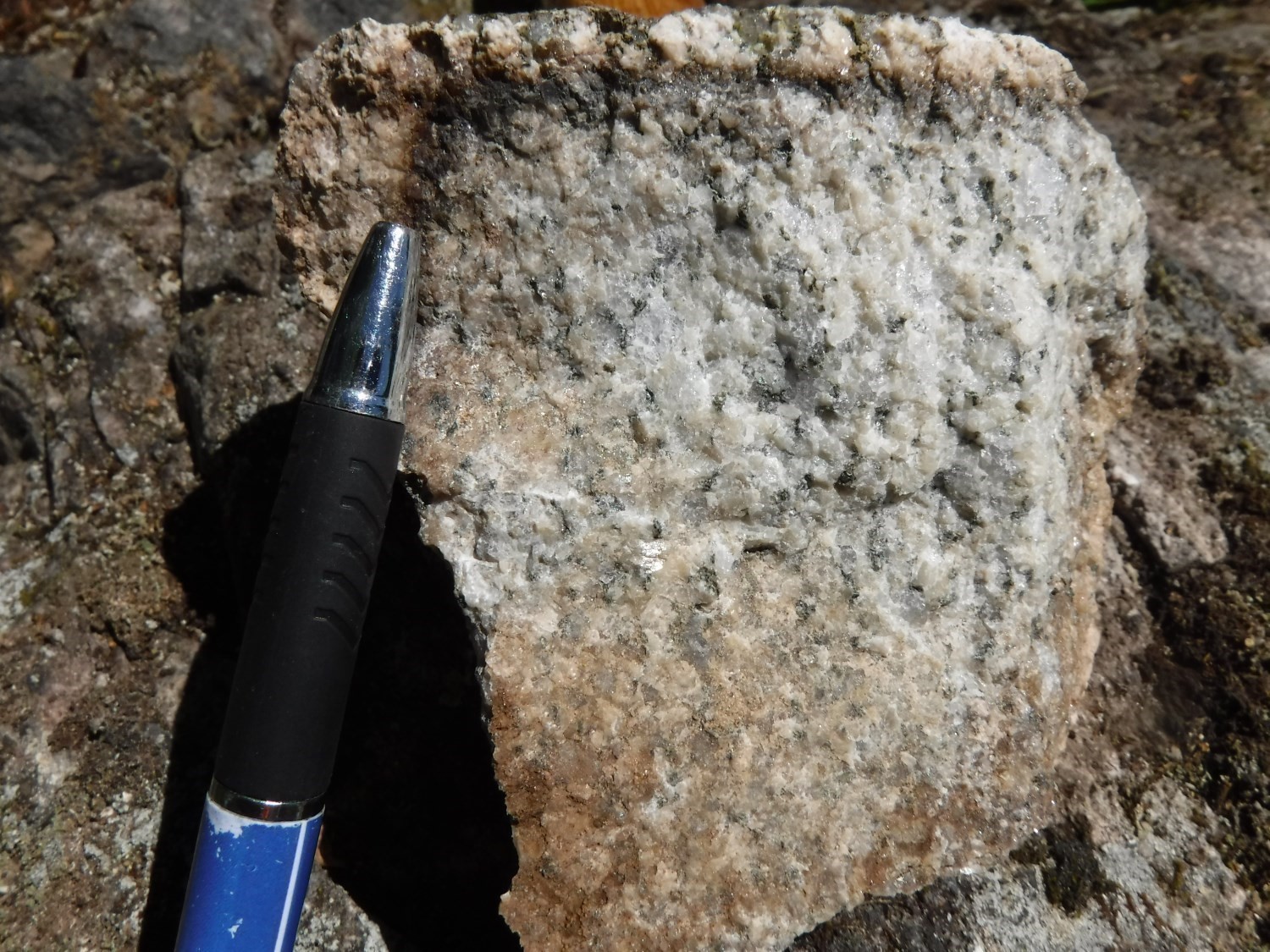 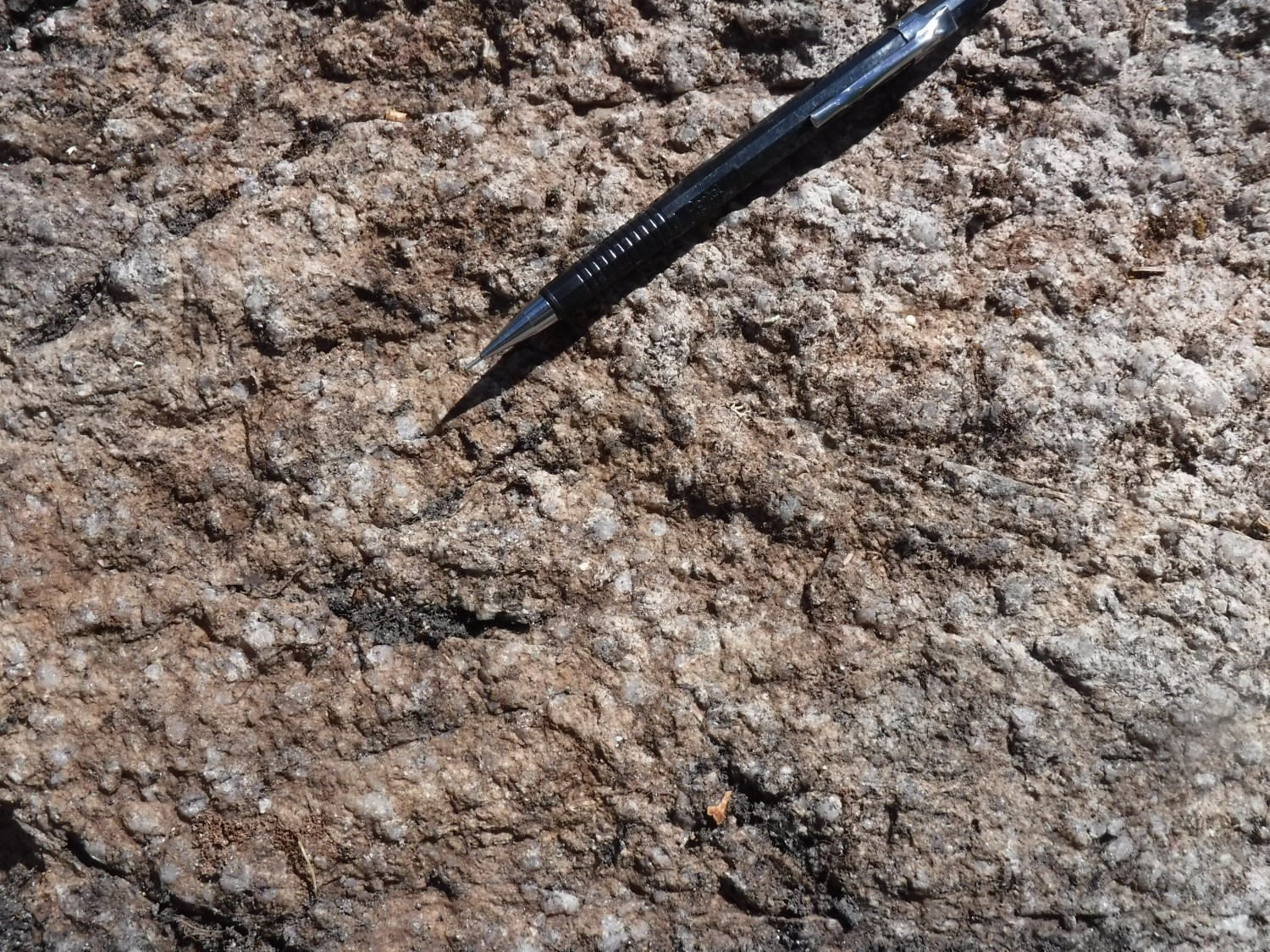 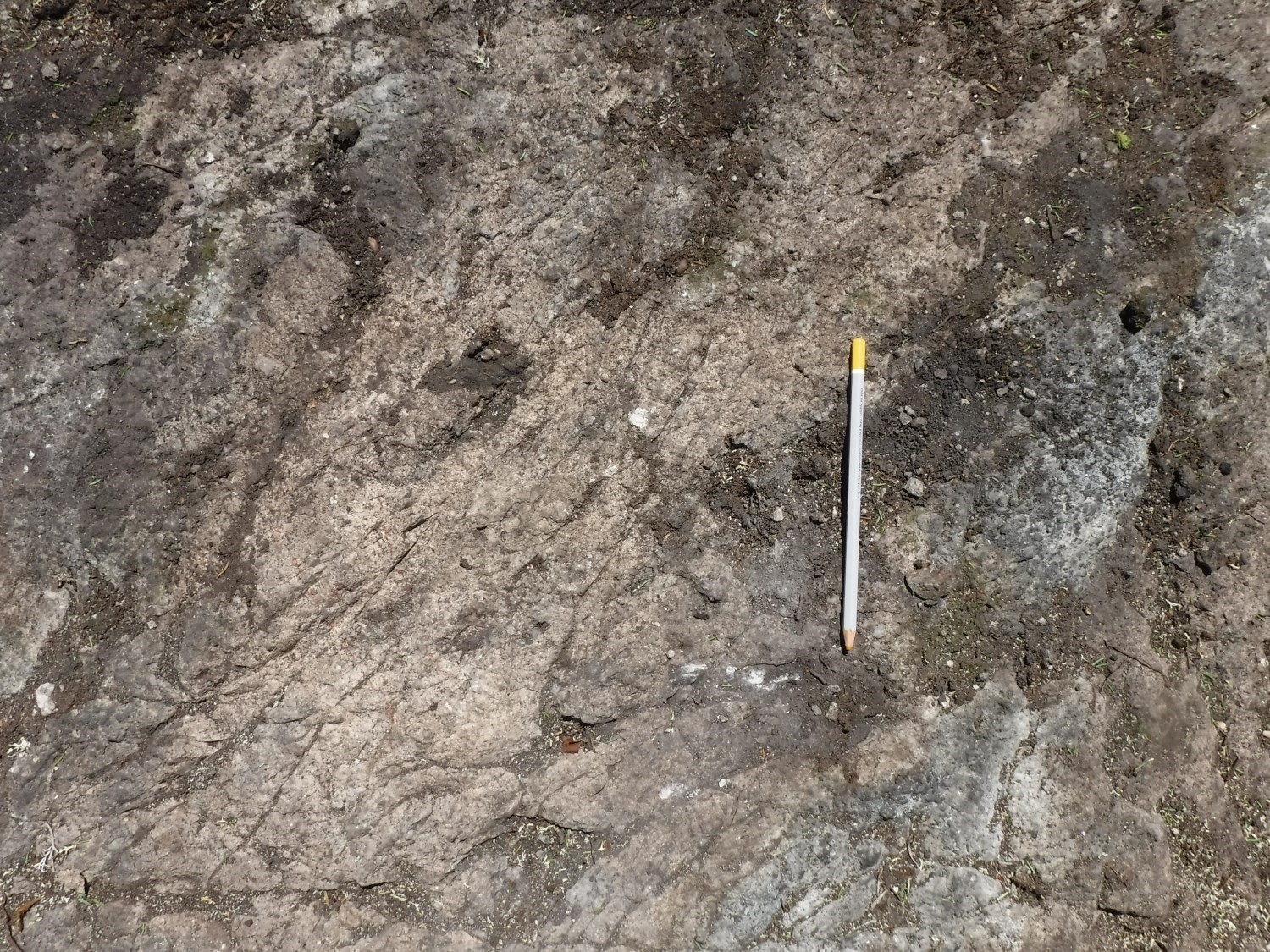 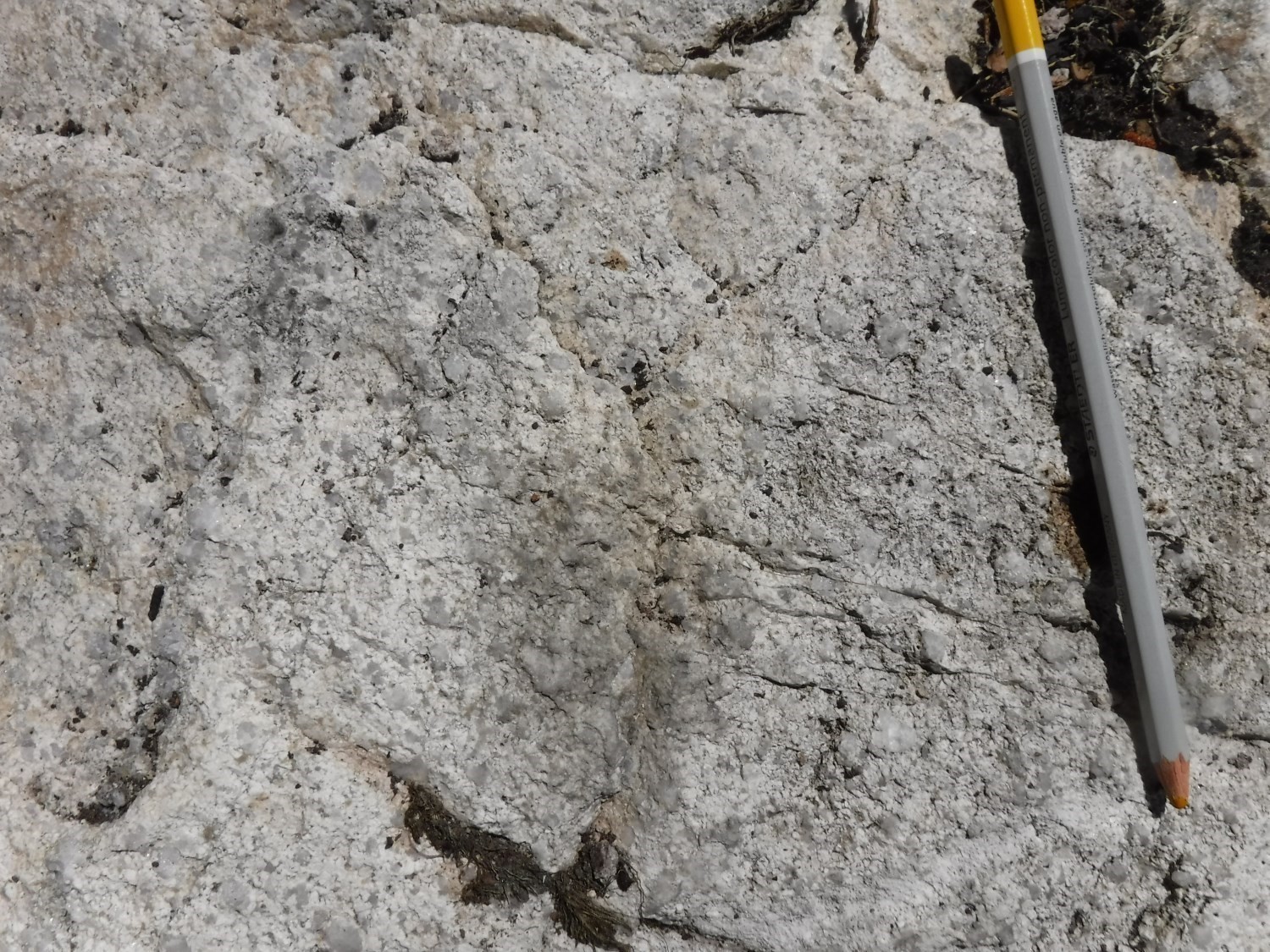 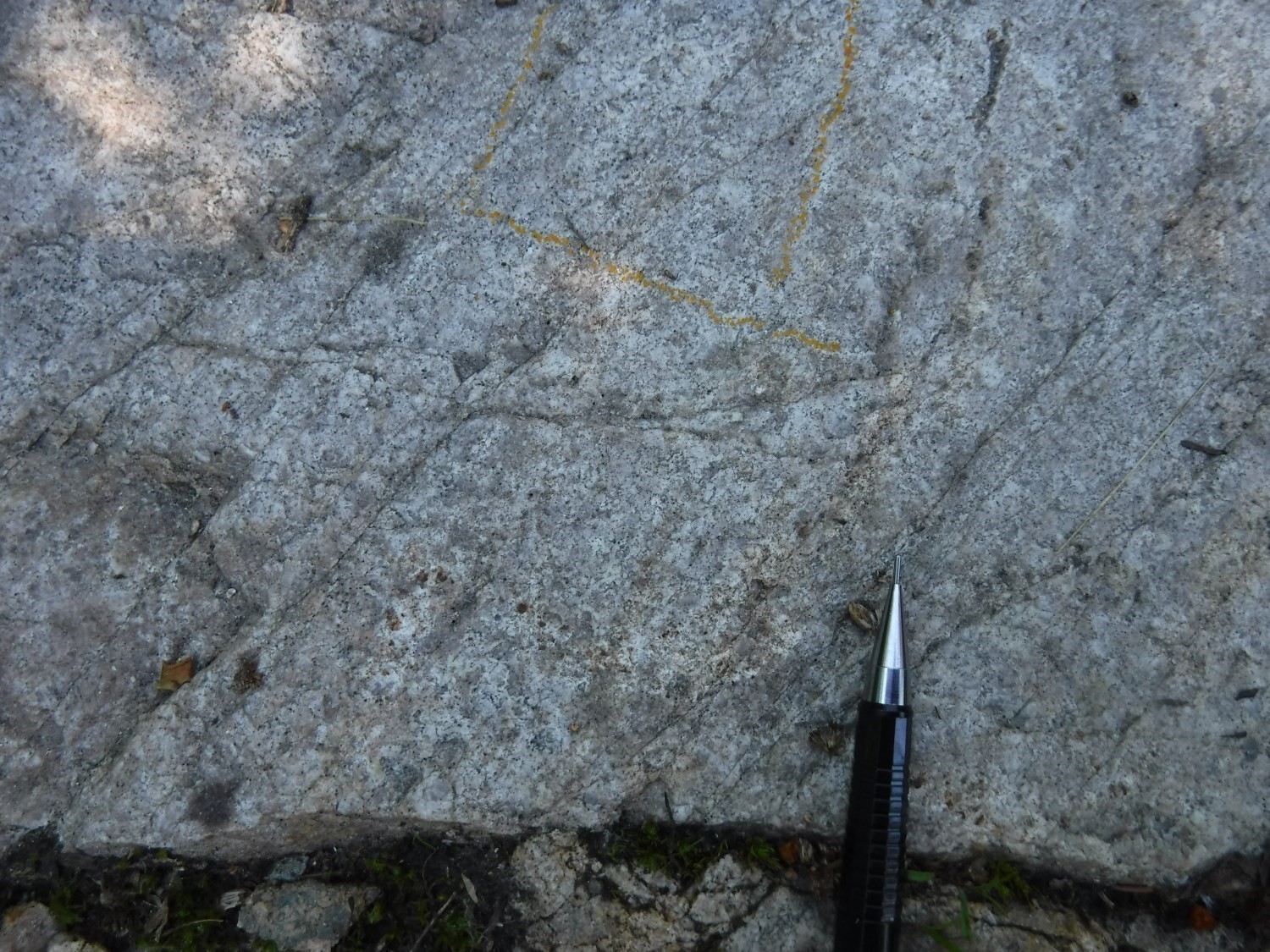 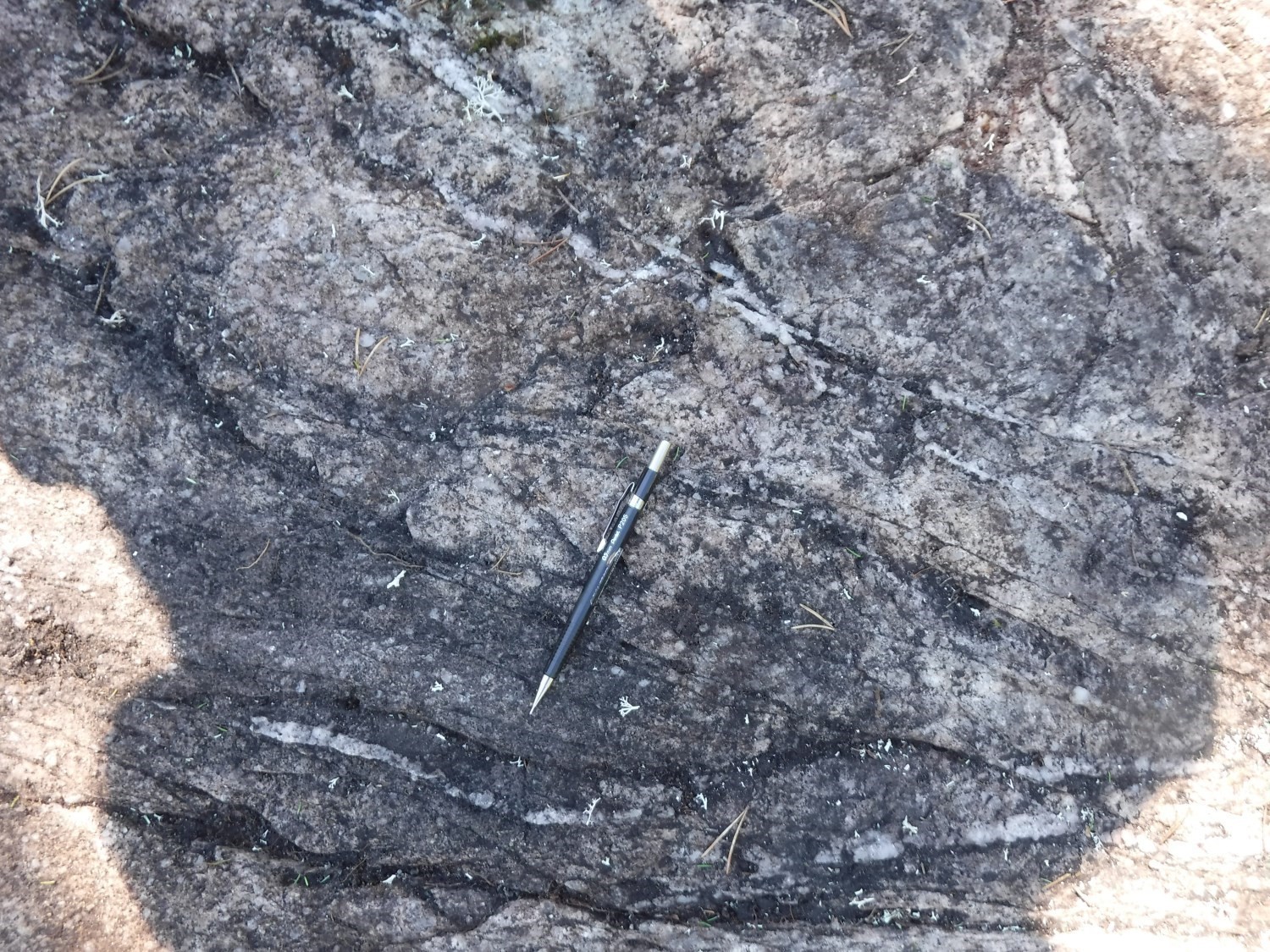 The Barraute Pluton, of tonalitic composition and calc-alkaline affinity, is generally quartz porphyritic. Phenocrystals are 5 to 7 mm in size, anhedralc to subhedral and make up ~15% of the rock. Tonalite is commonly weakly altered. The matrix is composed of 70 to 90% euhedral plagioclase laths (0.1 to 2 mm long), accompanied by ~5% subhedral ferromagnesian minerals (chlorite, epidote and sparse hornblende crystals). In altered surface, quartz phenocrystals have a very accentuated positive relief, while feldspars are altered and chalk white. Staining tests reveal that this intrusion does not contain K-feldspar. The chemistry of this pluton is comparable to that of the Carpentier Pluton (Pilote et al., 2019).

Mafic to felsic dykes cut this pluton in a few places. They vary in thickness from 0.1 to 10 m and are aphanitic to fine grained. They contain up to 40% subhedral feldspar crystals and ferromagnesian phenocrystals (trace-10%) almost entirely chloritized. The mafic dyke matrix is commonly carbonatized (dolomite or ankerite varieties) and chloritized. In addition, igneous textures are obliterated. Chloritization replaces textural elements of the dyke matrix and commonly produces millimetric flakes that mark regional schistosity. Contacts with tonalite are well-defined but usually sheared. Dykes have relatively shallow dips, between 10° and 45° southward. In tonalite immediately adjacent to these dykes, the matrix is darker due to high chloritization of ferromagnesian minerals. Banded felsic dykes, commonly referred to as aplites (Legault, 1993), are locally observed in tonalite. These dykes are aphanitic to very fine grained. They are cut by mafic dykes.

Unaltered tonalite contains visible sulphides very locally, specifically euhedral millimetric pyrite. This tonalite is cut by NE and NW-oriented shear zones, infilled by quartz veins that may contain appreciable amounts of sulphides. Such veins are found in four mineralized zones: Vallée (Currie-Mills), Zone Ouest, Tri-Cor and Chevalier. Legault (1993) indicates that most quartz-sulphide veins that have been sampled and are hosted in shear zones yielded gold values during their exploration work.

The Barraute Pluton has a subcircular shape and an average diameter of ~2 km. It is located in the NE portion of sheet 32C05, east of the Rivière Laflamme Fault.

The Barraute Pluton cuts andesites and various felsic volcanics of the Landrienne Formation. It is cut by mafic to felsic dykes. Beullac (1986) reports the presence of a weak amphibolite facies contact metamorphism aureole affecting mafic volcanics at the eastern edge of the pluton. In contrast, Legault (1993) and Pilote et al. (2019) note that they did not observe such an aureole. This pluton is interpreted as synvolcanic in age by Pilote et al. (2019) based on the absence of a contact metamorphism aureole and the presence of a significant regional fabric S1.