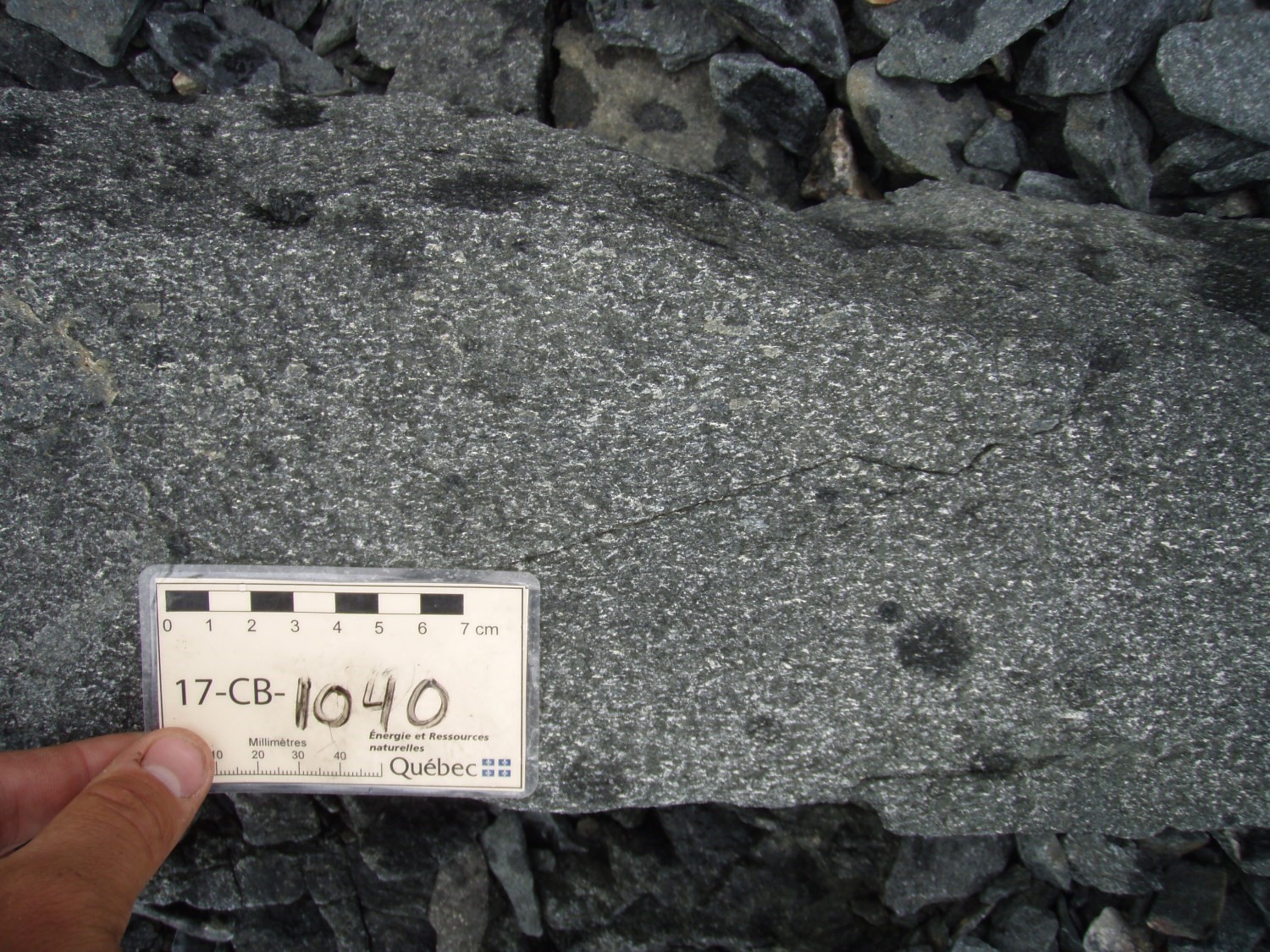 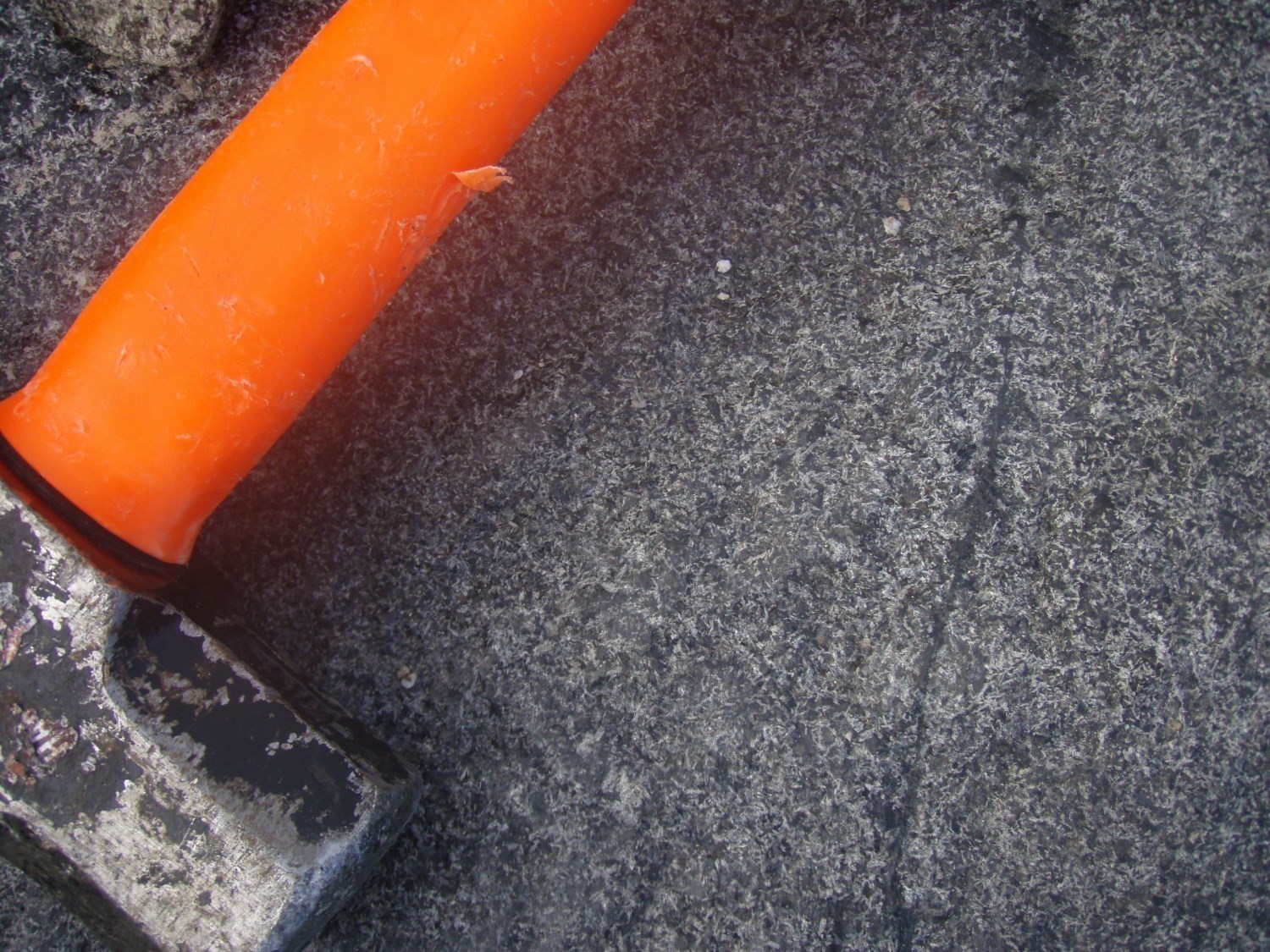 The Rivière Payne Dykes consist of gabbro; they have a subophitic to ophitic texture and are medium to coarse-grained. In some areas, these dykes have a greater variety of petrographic facies. They are fine grained to aphanitic and have ophitic to trachyoidal textures due to a magmatic flow structure (Berclaz et al., 2001; Berclaz et al., 2002; Cadieux et al., 2002). Rock is bluish grey in fresh exposure and greenish brown in altered patina (Berclaz et al., 2001; Berclaz et al., 2002; Cadieux et al., 2002). Gabbro is composed of euhedral plagioclase crystals surrounded by a matrix of clinopyroxene and locally, anhedral to subhedral orthopyroxene. Dykes have aphanitic chilled margins of decimetric thickness, containing euhdral microcrystals of plagioclase and augite aligned with contact with the host rock (Madore et al., 1999). Common accessory minerals are quartz, iron and titanium oxides and biotite.

Deformation and metamorphism of dykes cutting the Troie and Qimussinguat complexes are generally null, while intrusions in the northeastern portion of the Faribault-Thury Suite show deformation and metamorphism that intensifies eastward towards the Labrador Trough (Madore et al., 1999). The amphibolite metamorphic facies is thus reached within the Diana Complex, as evidenced by the loss of their original igneous characteristics (Madore and Larbi, 2000). Metamorphic and alteration minerals include chlorite and amphibole partially replacing ferromagnesian minerals, as well a sericite-epidote assemblage replacing plagioclase. Dykes located near large brittle faults are also altered and contain chlorite, hematite and epidote veins (Madore et al., 2001).

The Rivière Payne Dykes are located in the Minto Subprovince. They predominate in sheet 25D, occupied by the northeast part of the Douglas-Harbour Domaine, near contact with the Labrador Trough. Dykes are also highly present in sheets 35H and 35B, and in smaller proportions in sheets 24M, 25C, 25E, 34N, 34O, 34P, 35A, 35C, 35F and 35G.

The dykes are planar, straight-lined and their general orientation is NNW-SSE. They vary in thickness from 0.5 to 100 m. The majority of these are discontinuous in space, forming segments 1 to 30 km long. They are grouped into a few swarms of denser dykes spaced 1-5 km apart and rarely up to 10 km apart. These clusters of denser swarms are spaced by several tens of kilometres.

Fahrig et al. (1985) performed K-Ar dating analyses on two samples of dyke’s chilled margins and obtained the ages of 1875 and 1790 Ma. These authors later concluded that the crystallization age of the dykes was older than 2000 Ma. In their compilation work, Fahrig and West (1986) cite an age of 2175 Ma for the intrusion of the Rivière Payne Dykes. The method and the analyzed mineral are not mentioned. Also, the compilation work of Buchan and Ernst (2004) indicates an age between 2170 and 2160 Ma. The analysis was done by the U-Pb method, but the mineralized mineral is not mentioned.

Paleoproterozoic Rivière Payne Dykes cut Minto Subprovince’s Archean rocks. Contacts with host rocks are sharp and locally lobbed. These dykes are in places associated with brittle fault zones (Madore et al., 2001). Ernst and Buchan (2004), as well as Clark and Wares (2004), mention the Rivière Payne River Dykes’s association with mafic volcanics at the base of the stratigraphic sequence of the Labrador Trough﻿’s first volcano-sedimentary cycle.