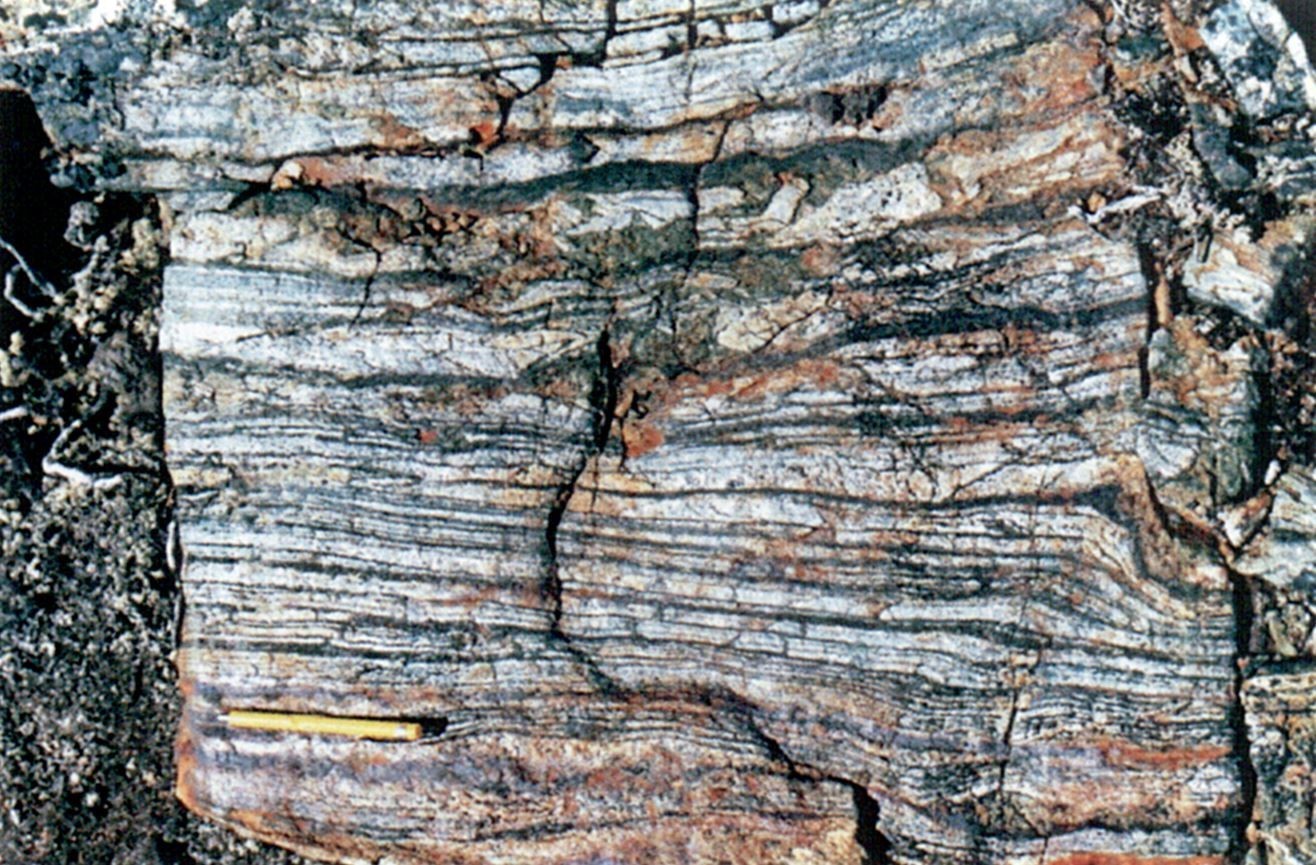 Although they did not define the unit at scale 1:1 000 000, Stevenson et al. (1969) observed a sequence in the Mangnuc and Roulier lakes area containing numerous basic intrusions, migmatites and gneiss, as well as a gabbro intrusion. About 30 years later, Maurice et al. (2005) formally introduced the Roulier Belt in the Kogaluk Bay area to describe a sequence of well-preserved isolated supracrustal rocks. The unit is named after Roulier Lake (sheet 34N07), ~60 km east of Hudson Bay. This lithodeme was not assigned to a volcano-sedimentary complex (Simard, 2008).

Unit nArlr1 consists mainly of mafic metavolcanic rocks containing hornblende, and locally plagioclase phenocrystals. The rock is dark green, fine grained to aphanitic, granoblastic, massive to foliated and tholeiitic in affinity. Accessory minerals present are biotite, magnetite, titanite and quartz. In areas that have been leached, mafic volcanics are rusted, silicified and contain disseminated or veinlet sulphides (pyrite, pyrrhotite and locally chalcopyrite), micas and traces of tourmaline crystals. These mafic metavolcanic rocks are the dominant lithology of the Roulier Belt. The unit also contains dykes and intrusions of massive gabbro, as well as felsic rocks and tuff interstratified in metasedimentary rocks.

Unit nArlr1a consists of three hornblende gabbro ovoid intrusions. They are a few kilometres long and cut the Roulier Belt. Gabbro is mesocratic, homogeneous, fine to medium grained, and massive to foliated. The subophitic igneous texture is well preserved locally. The rock is mostly composed of hornblende, plagioclase and a small amount of brown biotite. Locally, clinopyroxene relics can be observed in hornblende crystals. Coarser plagioclase crystals are usually zoned and surrounded by granoblastic crystals. 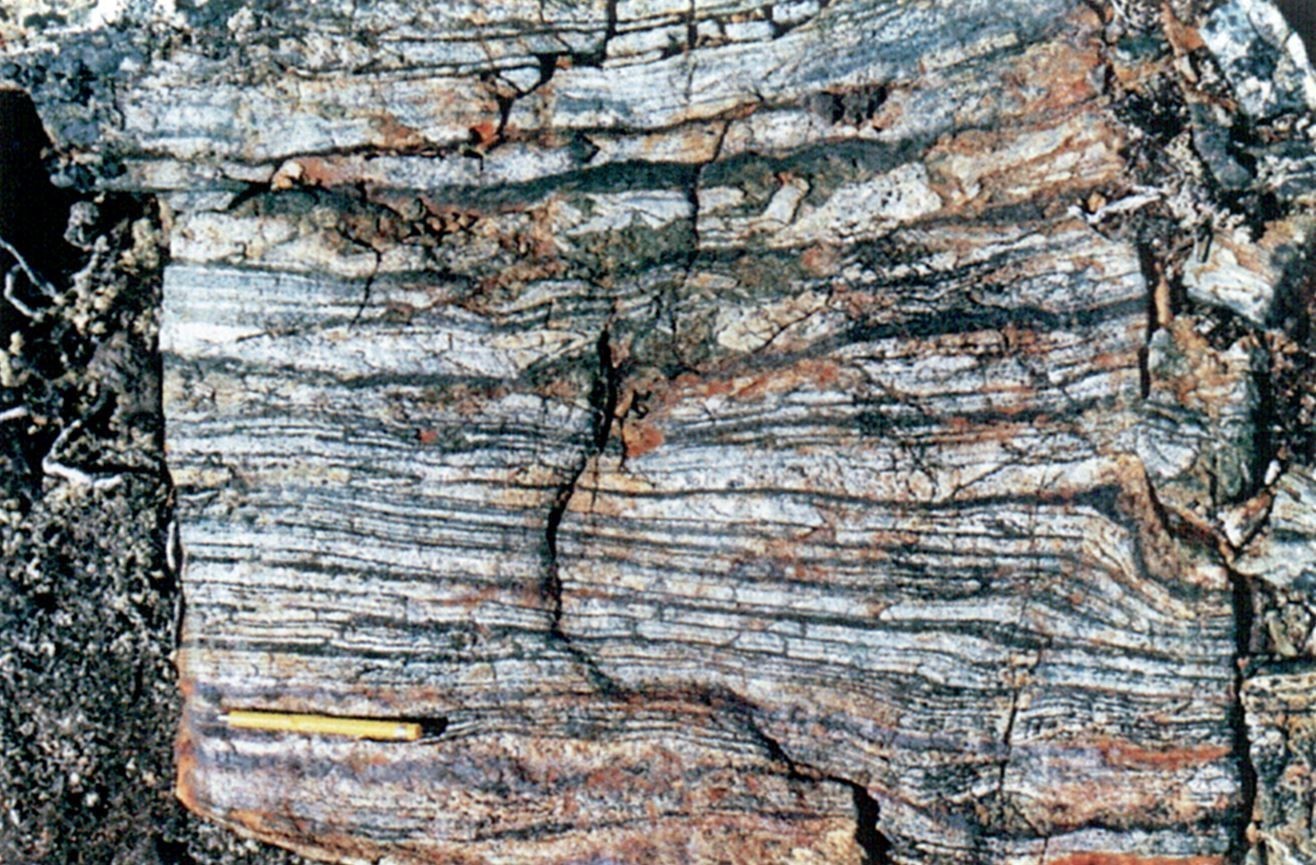 Unit nArlr3 consists of kilometric lenses of volcaniclastic rock of intermediate to felsic composition. These pyroclastic rocks, which are fairly abundant (~10% of the volume of the Roulier Belt), are mainly represented by crystal and lapilli tuffs, rounded to elongated in foliation, but the unit locally includes block tuff of andesite composition. They are white to light grey, of heterogeneous to homogeneous particle size, foliated, usually finely banded and highly sheared. The dominant mineral phases are quartz, biotite, sericite and epidote, with local sillimanite, cordierite and garnet. Tuffs are calc-alkaline in affinity.

The Roulier Belt forms a volcano-sedimentary sequence 30 km long by 10 km wide on average, but which pinches towards the SSE. It mostly outcrops near Roulier and Mangnuc lakes (sheet 34N07), ~50 km east of Hudson Bay.

Essentially, the Roulier Belt is hosted in tonalites of the Qilalugalik Suite and granite of the Pinguq Suite. White tourmaline granite pegmatitic dykes and quartz veins cut all other units of the belt (Maurice et al., 2005). Some amphibolite klippes of the Innuksuac Complex are located near the Roulier Belt and could be associated with it (Simard, 2008). These klippes would have been dismembered and metamorphosed to the granulite facies during intrusion of the surrounding granitoids.