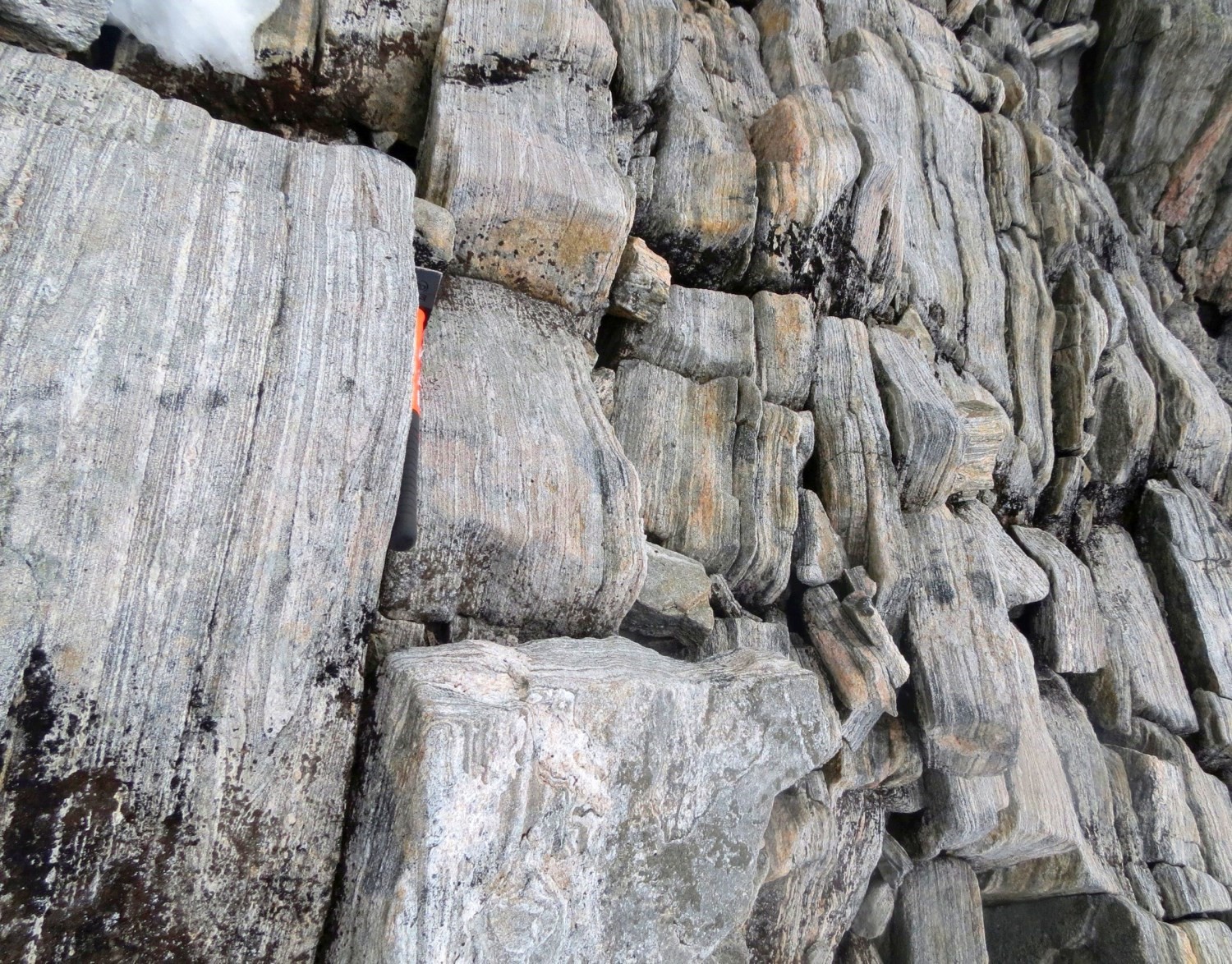 Van Kranendonk et al. (1994a) introduced the term “Noodleook Complex” to group a package of predominantly gneissic lithologies in the centre of the Torngat Mountains, bordering the Nain and Churchill provinces. The Noodleook Complex appears on geological maps of the Geological Survey of Canada following work covering the Torngats (Van Kranendonk, 1993, 1994a, 1994b; Van Kranendonk et al., 1994a, 1994b, 1995; Van Kranendonk and Wardle, 1994, 1995). The complex included the Hutton and Killinek suites, as well as Archean gneiss (Van Kranendonk and Wardle, 1996). Verpaelst et al. (2000) designated this unit as the “Iberville Complex” in the Circle Mountain area (NTS sheets 14L12 and 14L13). Mathieu et al. (2018) excluded from the Noodleook Complex Paleoproterozoic rocks of the Killinek Suite and mafic intrusions of the Hutton Suite to preserve only gneissic lithologies. The Noodleook Complex outcrops in mountainous areas in the Point Le Droit area (sheet 24P, Mathieu et al., 2018) and is not easily accessible. As a result, few outcrops were visited in this area. The name of this unit comes from the Noodleook Fjord (sheet 24P16) in Labrador.

The Noodleook Complex consists mostly of felsic gneiss of various compositions. It also includes intermediate to mafic horizons and units. All the lithologies in this complex are fine grained and characterized by granoblastic, foliated and banded textures. Some areas have been affected by partial melting. Van Kranendonk et al. (1994a) consider this unit to be an Archean package metamorphosed to the granulite facies and then retrograded to the amphibolite facies in the Paleoproterozoic. Mathieu et al. (2018) corroborate these observations and note the presence of paragenesis compatible with the amphibolite facies, as well as preserved horizons containing hypersthene (granulite facies). 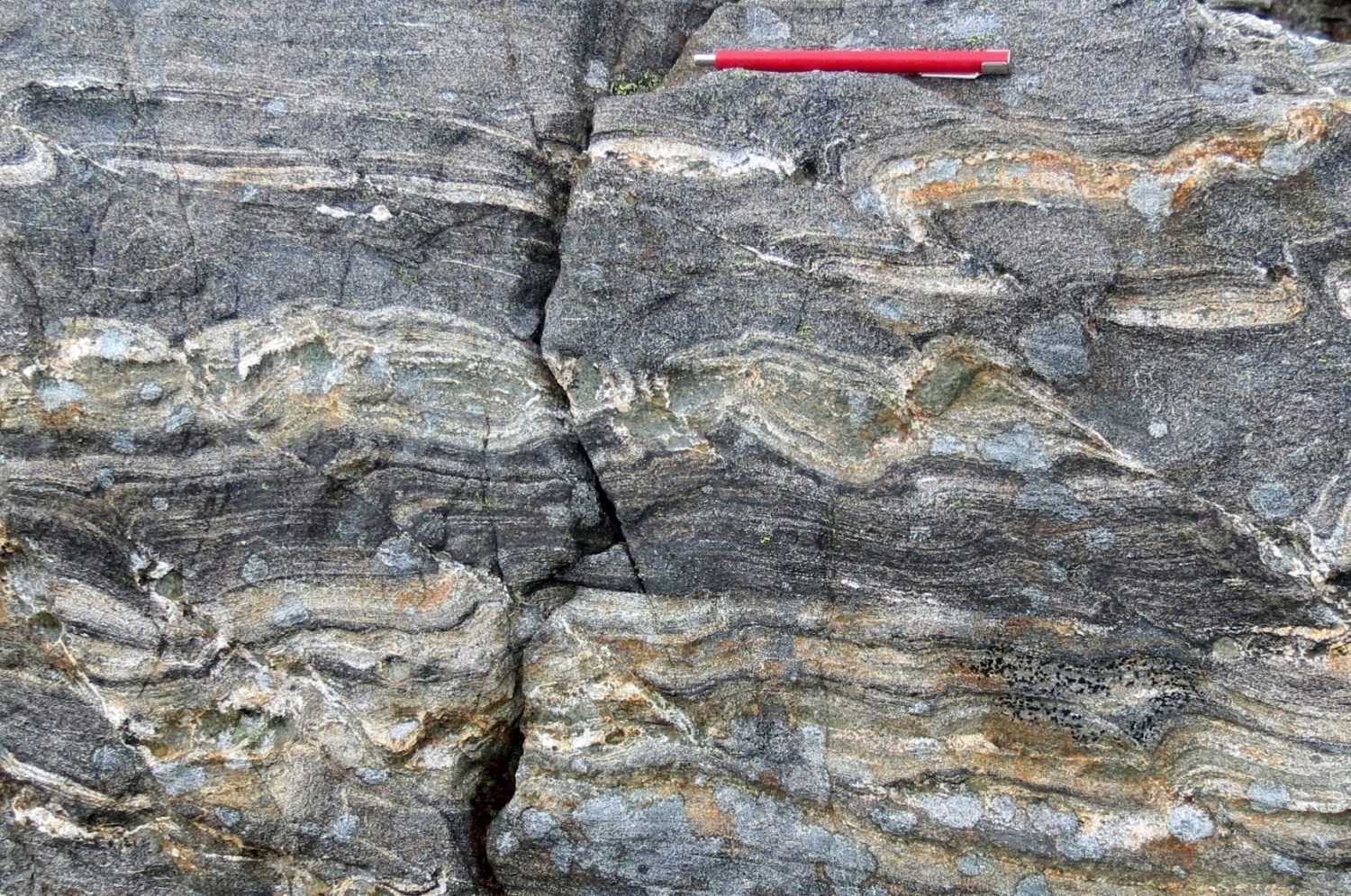 The unit was described by Van Kranendonk et al. (1994a). It is composed of fine-grained amphibolite, banded and dark green in both alteration patina and fresh exposure. The magnetic susceptibility of the rock is very low. Banding is associated with alternating centimetric horizons that are more or less rich in green hornblende (50-90%). Some bands contain epidote or quartz. In thin section, minerals are even grained. Hornblende marks foliation and shows migmatitization of grain edges, such as plagioclase. Accessory phases are sphene, opaque minerals and apatite. Amphibolite is often affected by conformable intrusions of pink hololeucocratic syenogranite, medium to coarse grained and foliated. 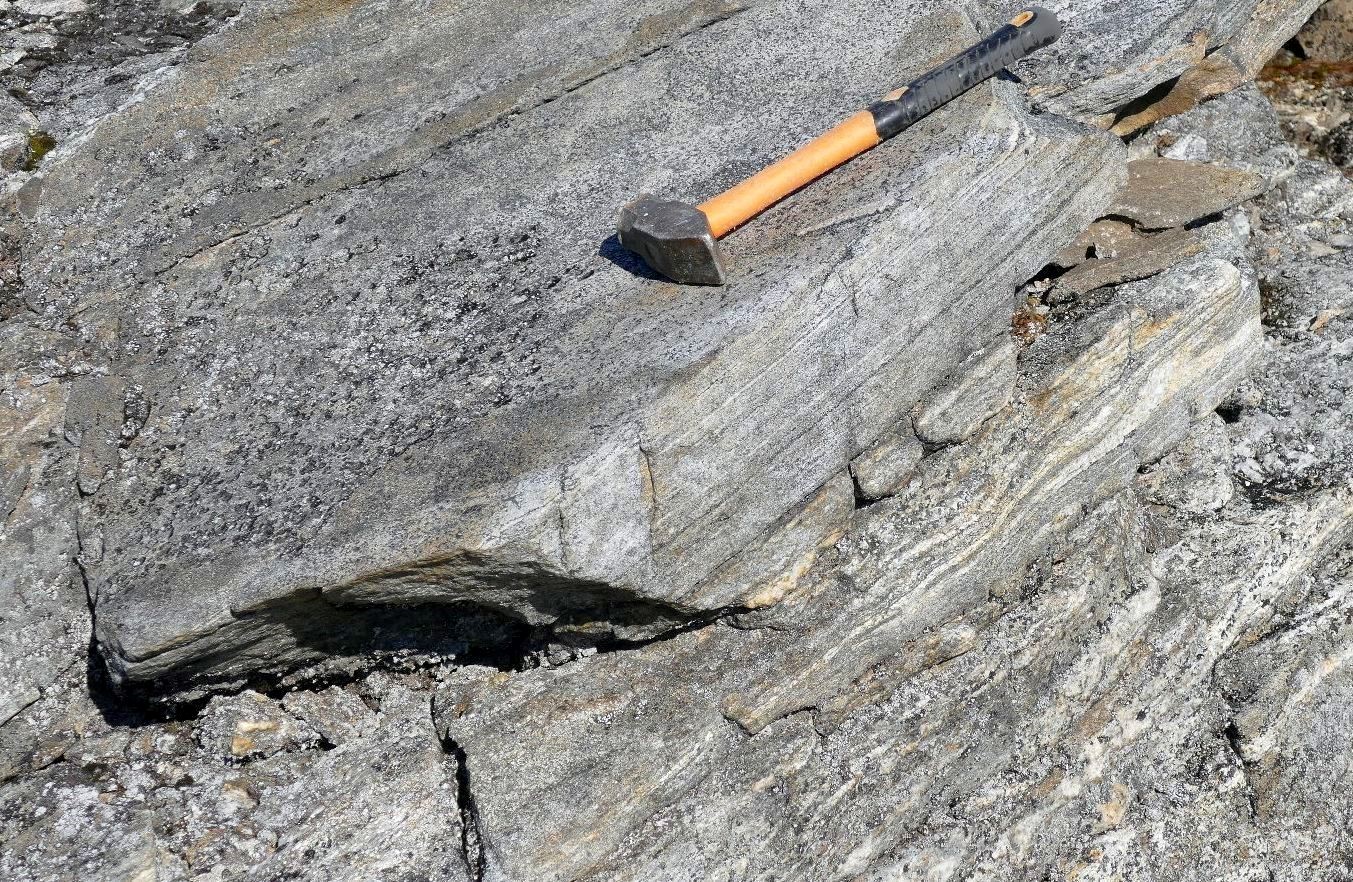 The unit is located near the southern and eastern contact of the Killinek Suite. It occurs as decametric to hectometric continuous strips. It is composed of light grey gneiss of mainly tonalitic composition, but which also contains granodioritic and granitic bands and horizons, and minor proportions of intermediate to mafic bands. Banding is sharp and regular. Tonalitic horizons are not magnetic; however, the magnetic susceptibility of granitic horizons is high. Centimetric banding is associated with alternating laminae of 1 to 20% mafic minerals. Some millimetric to centimetric bands are hololeucocratic, medium grained, commonly discontinuous and have igneous texture. These bands are interpreted as mobilisate. Gneiss also contains millimetric and centimetric amphibolite bands. In addition, the unit is commonly intruded by transposed horizons of coarse-grained leuocratic granite, whitish and deformed.

The dominant ferromagnesian phases are brown biotite and green hornblende. Hornblende is most abundant in the most mafic bands. Biotite is rich in zircon inclusions. The other phases are muscovite and, in places, clinopyroxene. Opaque minerals, sphene and apatite are observed as accessory phases. The fine to medium-grained quartzofeldspathic matrix is granoblastic. In the most deformed zones, grain edge migration patterns are recognized and plagioclase twins are folded. Quartz has undulatory extinction. Granodioritic to granitic bands contain orthose and myrmekites. 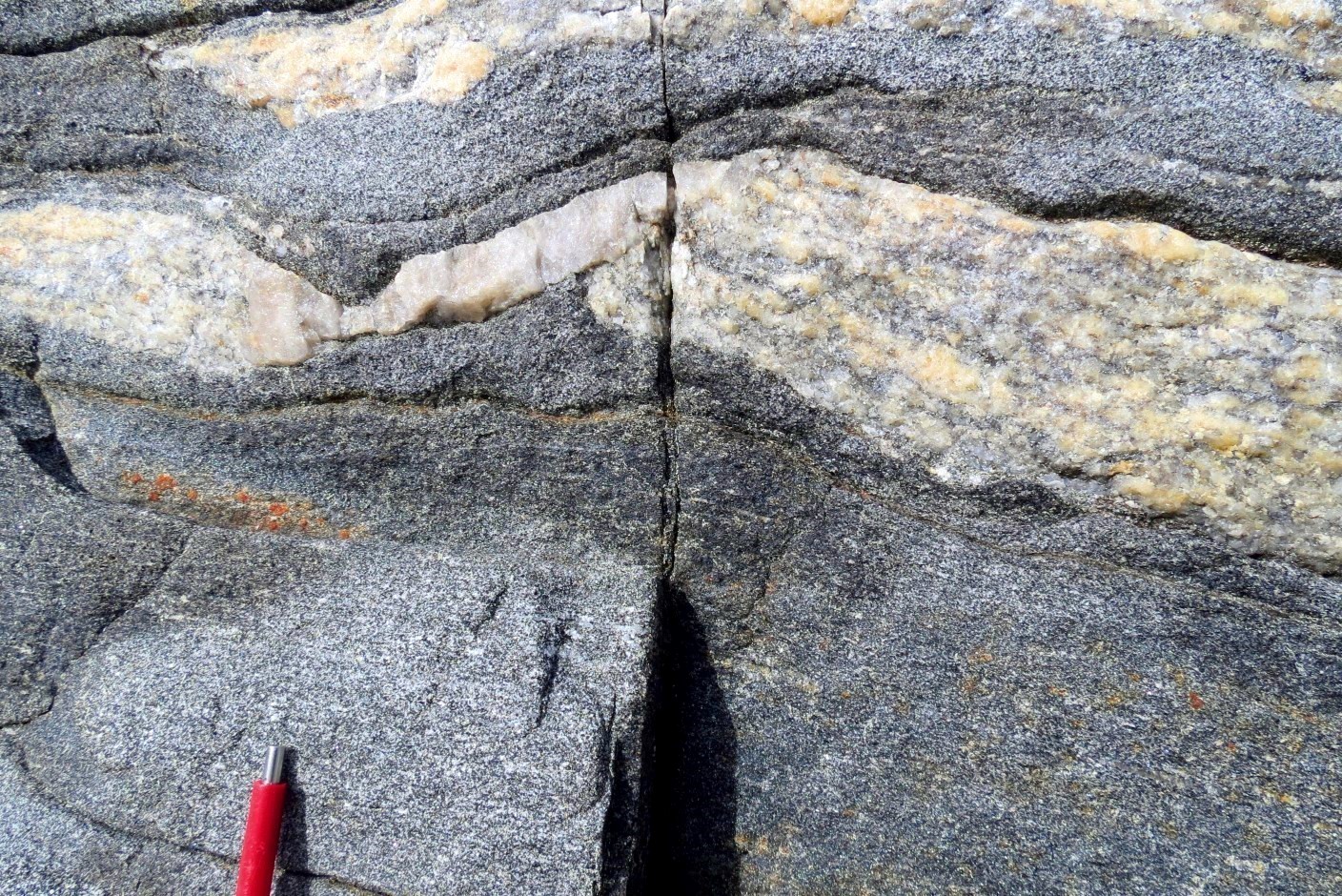 This subunit is composed of non-magnetic mesocratic dioritic gneiss. The foliated rock is homogeneous and has a dark grey patina and fresh surface. It differs from the surrounding tonalitic gneiss bands due to the lack of banding, quartz poverty (<5%) and high homogeneity. In thin section, plagioclase is even grained and hornblende and brown biotite are in equal proportions. Opaque minerals and apatite are observed as accessory phases. 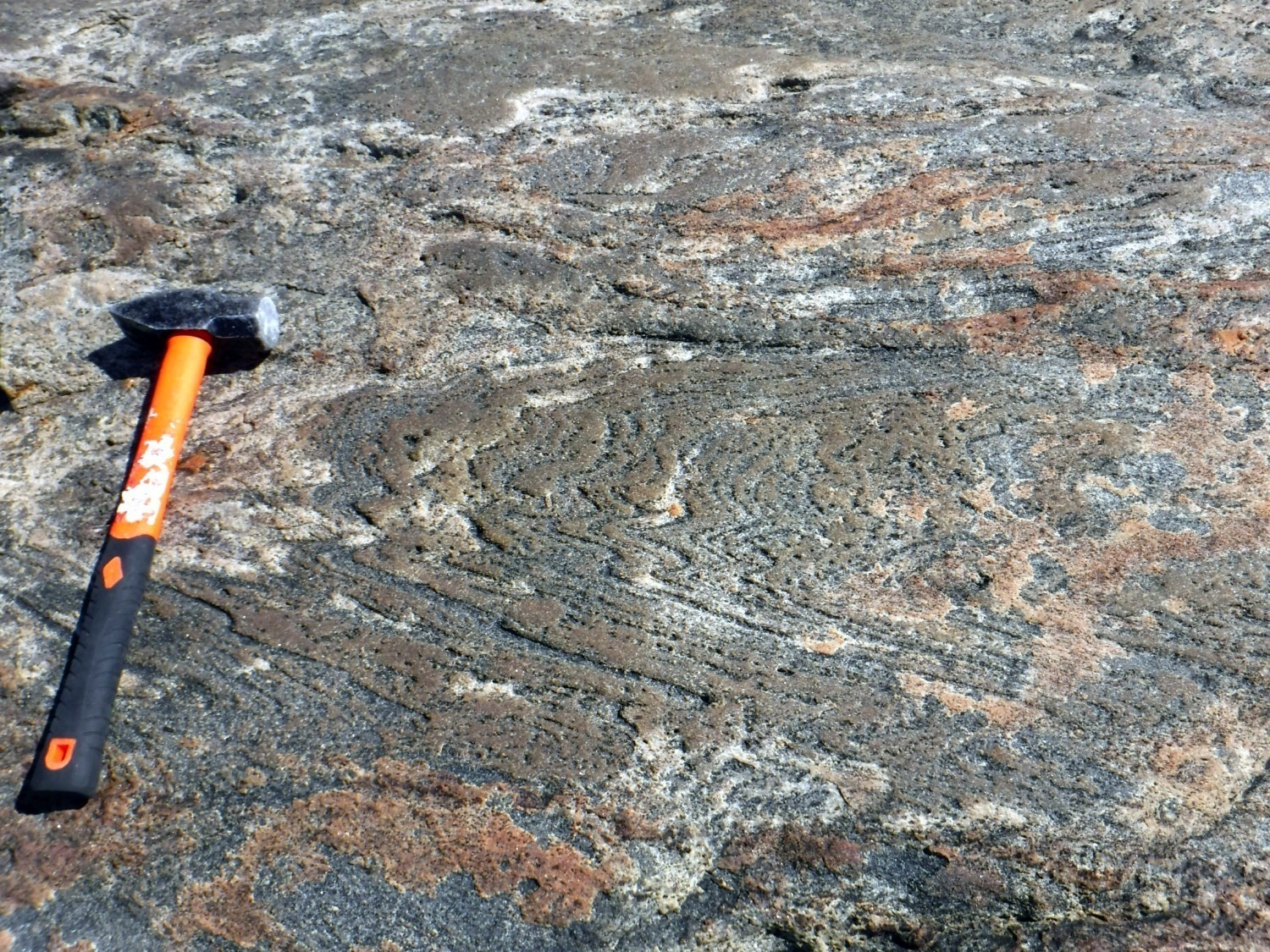 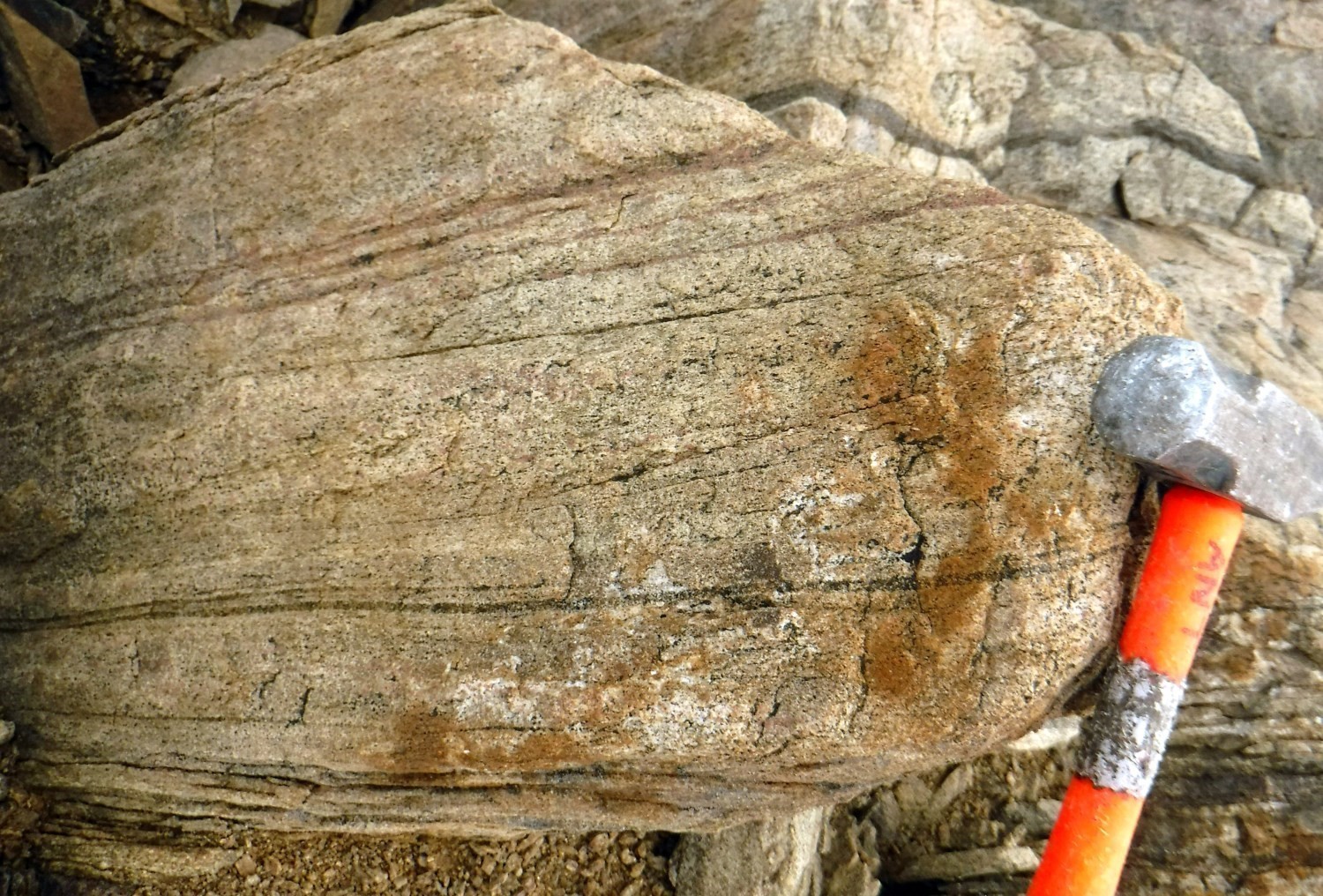 This subunit consists of the same lithologies as the main ApPnoo2 unit, but is distinguished by the presence of orthopyroxene. It includes granulitic gneiss of tonalitic, granodioritic to dioritic composition. Subunit ApPnoo2b is surrounded by hypersthene intrusions of the Killinek Suite, close to the contact between the latter and metatexites of the Tasiuyak Complex. It is also mapped as hectometric to kilometric klippes in the far north portion of the Torngat Mountains. Rocks in this subunit bear the brown sugar and olive colours characteristic of orthopyroxene-rich lithologies. The ferromagnesian phases are orthopyroxene, variably altered in iddingsite, red biotite, hornblende and, more scarcely, garnet. Accesory phases are opaque minerals, apatite and zircon. Plagioclase is sericitized.

Bands and klippes of metasedimentary rocks outcrop as interstratifications in gneiss. These rusty, small (metric) horizons are rarely mapped to the work scale. They are composed of paragneiss and metatexite of sedimentary origin. Less biotite, garnet, muscovite, sulphides and graphite are present (<10%). 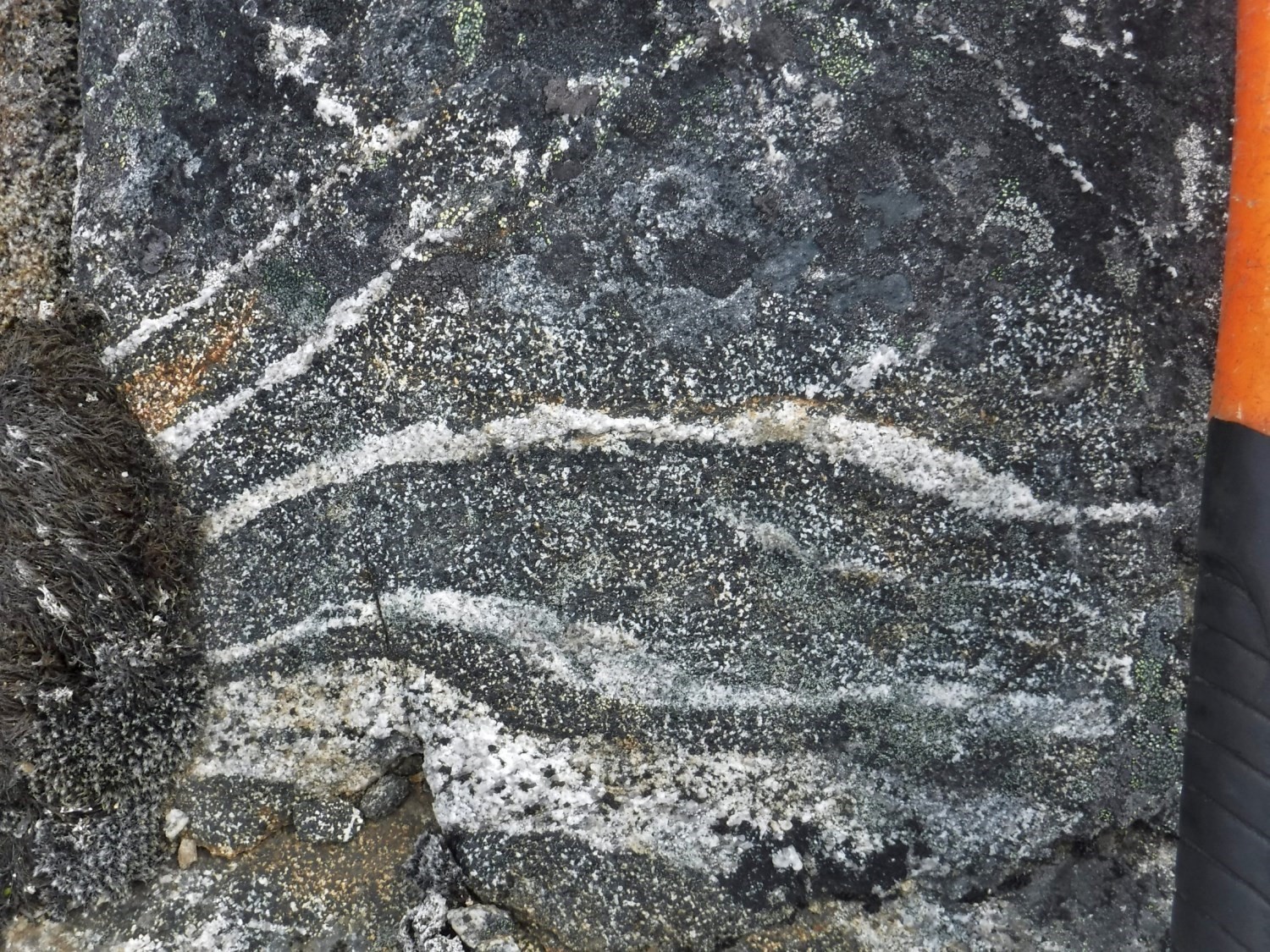 This unit consists of intermediate to mafic lithologies, amphibolitized and medium-grained. Green foliated rocks show banding of metric composition emphasized by many transposed intrusions (10-50%) of leucocratic tonalite. The partially recrystallized quartzofeldspathic matrix consists of medium grains with irregular edges, but also fine-grained granoblastic zones. It consists of 35-70% sericitized plagioclase and 5-15% quartz with undalory exticntion. Ferromagnesian phases account for up to 60% of the mode. The majority of them are green hornblende in granoblastic clusters or corroded poikiloblastic crystals containing numerous fine and rounded quartz inclusions. Clinopyroxene, orthopyroxene, brown biotite and garnet are also observed. Accessory minerals are apatite, epidote, scapolite, sphene, zircon and opaque minerals. Magnetic susceptibility is variable.

The Noodleook Complex forms strips from a few kilometres to a few tens of kilometres long for decimetric to hectometric apparent thicknesses. These strips are located primarily between the main unit of the Tasiuyak Complex and intrusions of the Killinek Suite in the Point Le Droit area (sheet 24P). Klippes and enclaves are also reported in the northern portion of the Torngat Mountains in the Grenfeld Sound area (sheet 25A).

Scott (1995a, 1995b) made several datings in rocks of the Torngat Mountains. Two orthogneiss samples were analyzed, one west of the Komaktorvik Shear Zone and the other directly within this structure. The analyses were done using the U-Pb method on zircons and titanites. Sample W577N is described as a tonalitic gneiss with a granitic intrusion. Scott (1995b) obtained a crystallization age on zircons of 1888 ±2 Ma, as well as an imprecise inherited age of 2266 Ma. The crystallization age, very young for a tonalitic gneiss, is possibly linked to a first episode of partial melting. The titanite analysis indicates a metamorphic age of 1745 ±2 Ma, interpreted as the retrograde metamorphic episode to the upper amphibolite facies. Sample D112 (Scott, 1995a) is described as a foliated tonalite containing a particularly homogeneous zircon population. A concordant age of 2802 ±2 Ma is reported. The metamorphic age obtained by the U-Pb analysis of titanite is 1745 ±4 Ma.