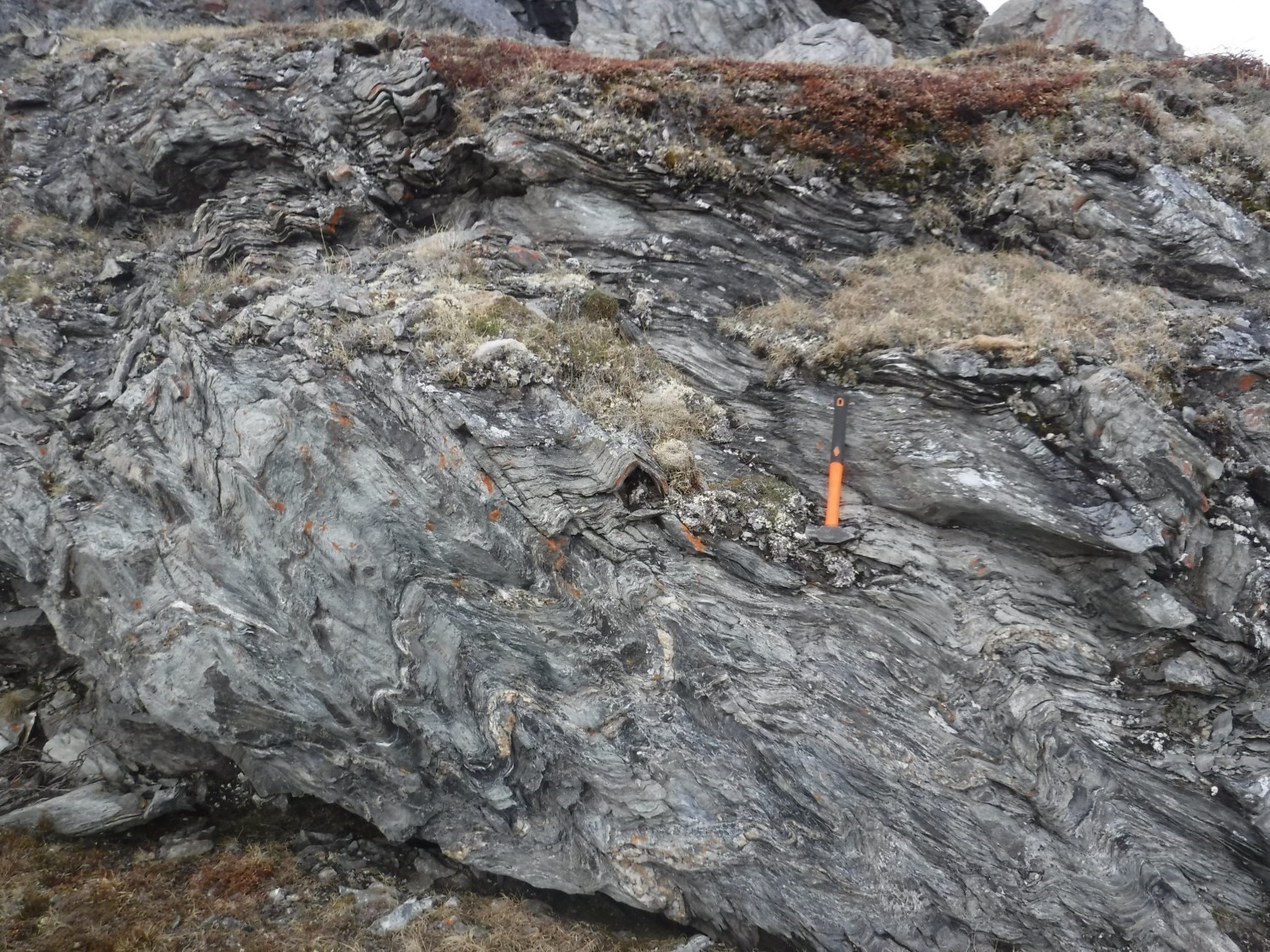 The Spartan Group was introduced by Lamothe et al. (1984) to describe an assemblage of phyllite and quartzite overthrusting the Chukotat Group along the Bergeron Fault. It also includes sedimentary rocks assigned to the Perrault Group by Hocq et al. (1994). 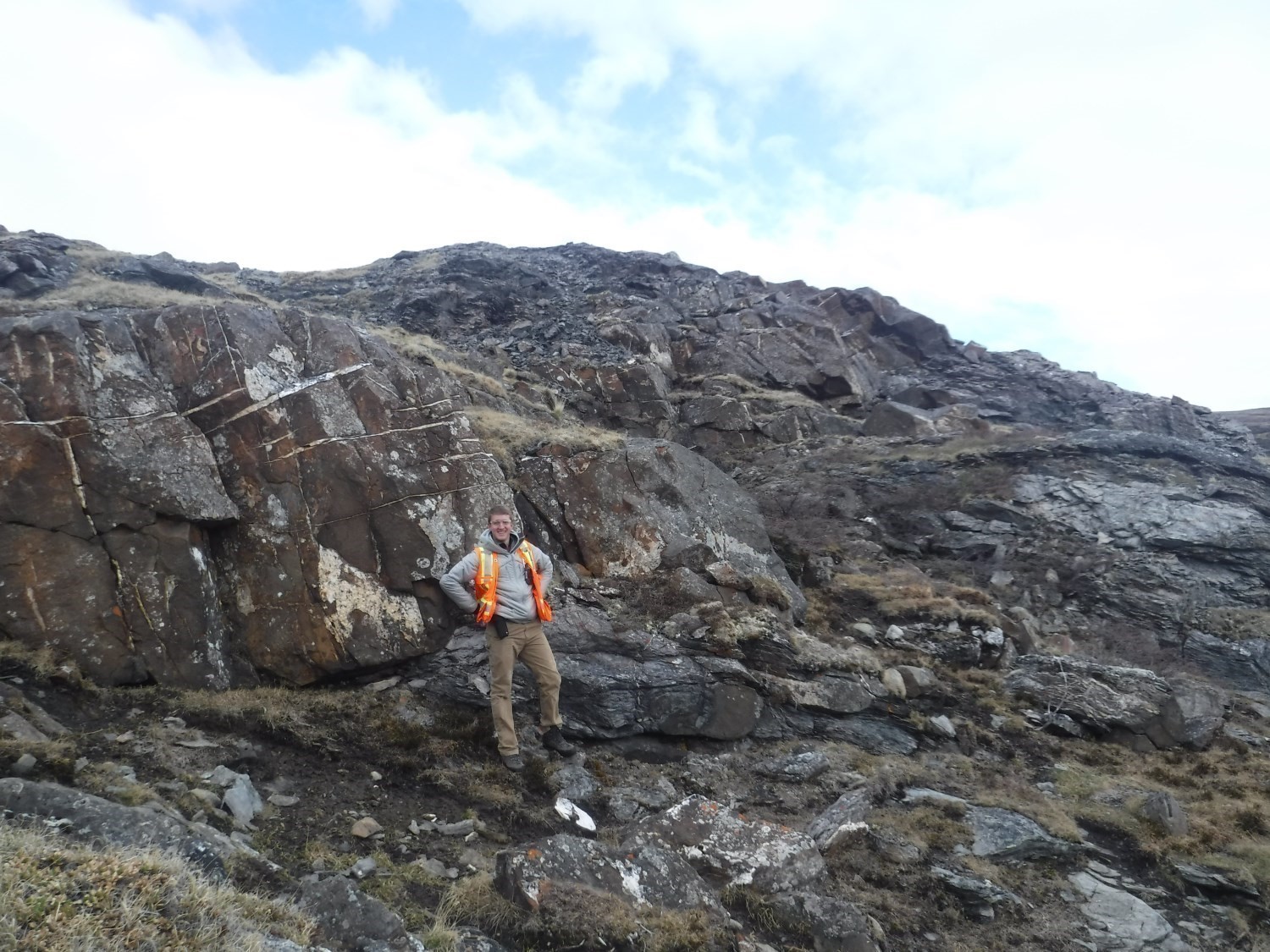 In the eastern portion of the Spartan Group, which extends from Spartan Lake to the area east of Watts Lake, the unit consists mainly of phyllite. Towards the structural top, to the north, the unit contains siltstone interbeds or, more locally, dolomitic beds (Lamothe et al., 1984; St-Onge and Lucas, 1993; Mathieu and Beaudette, 2019). In the central and western portions of the Spartan Group, detrital sedimentary rocks consist of an assemblage of decimetric to metric beds of lithic or feldspathic metawacke with layers of basaltic lava, and crystal or lapilli tuff. The composition of sedimentary rocks suggests a more proximal source than in the eastern portion. Several mafic and ultramafic sills and dykes intrude into sedimentary rocks. 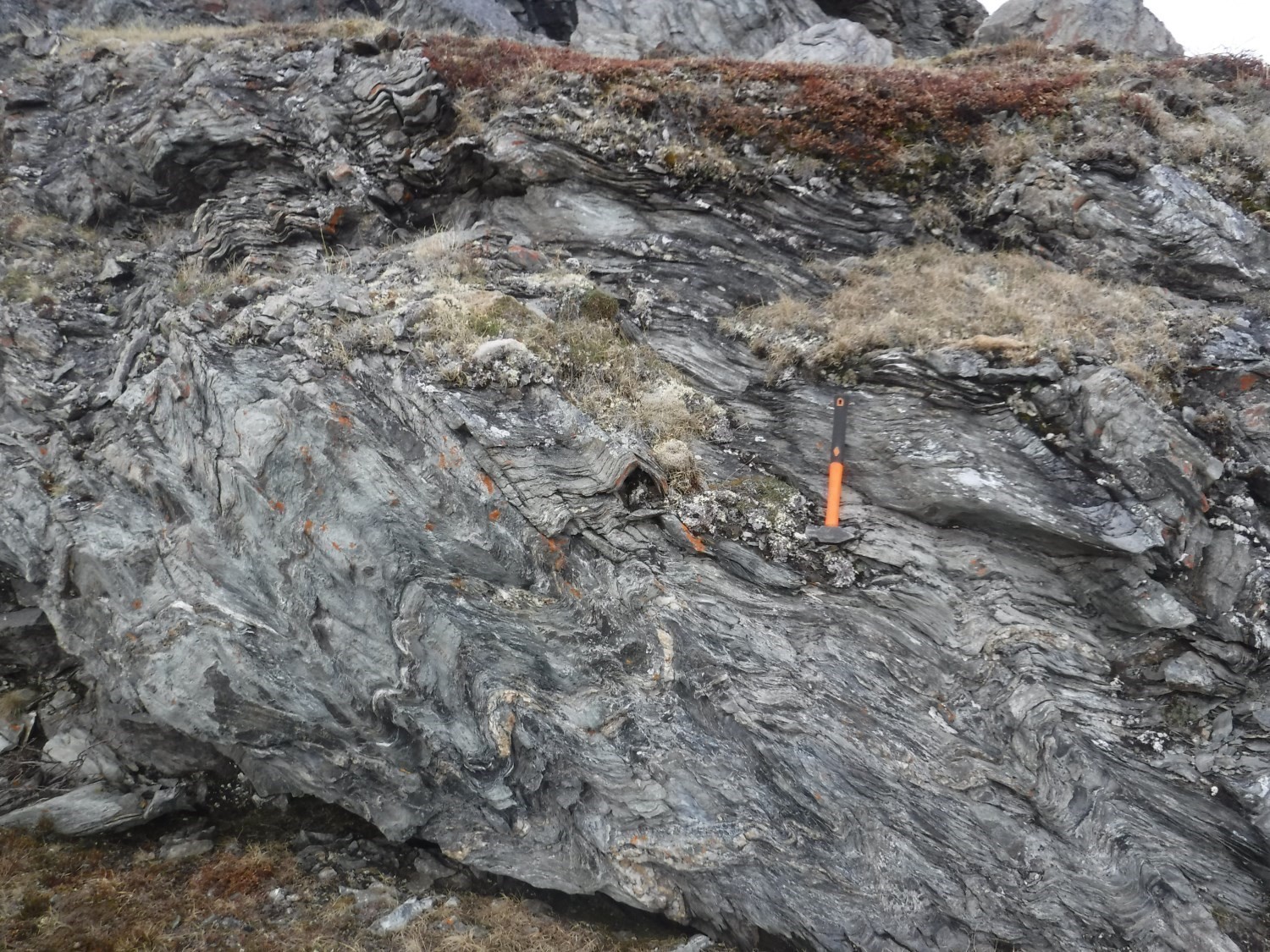 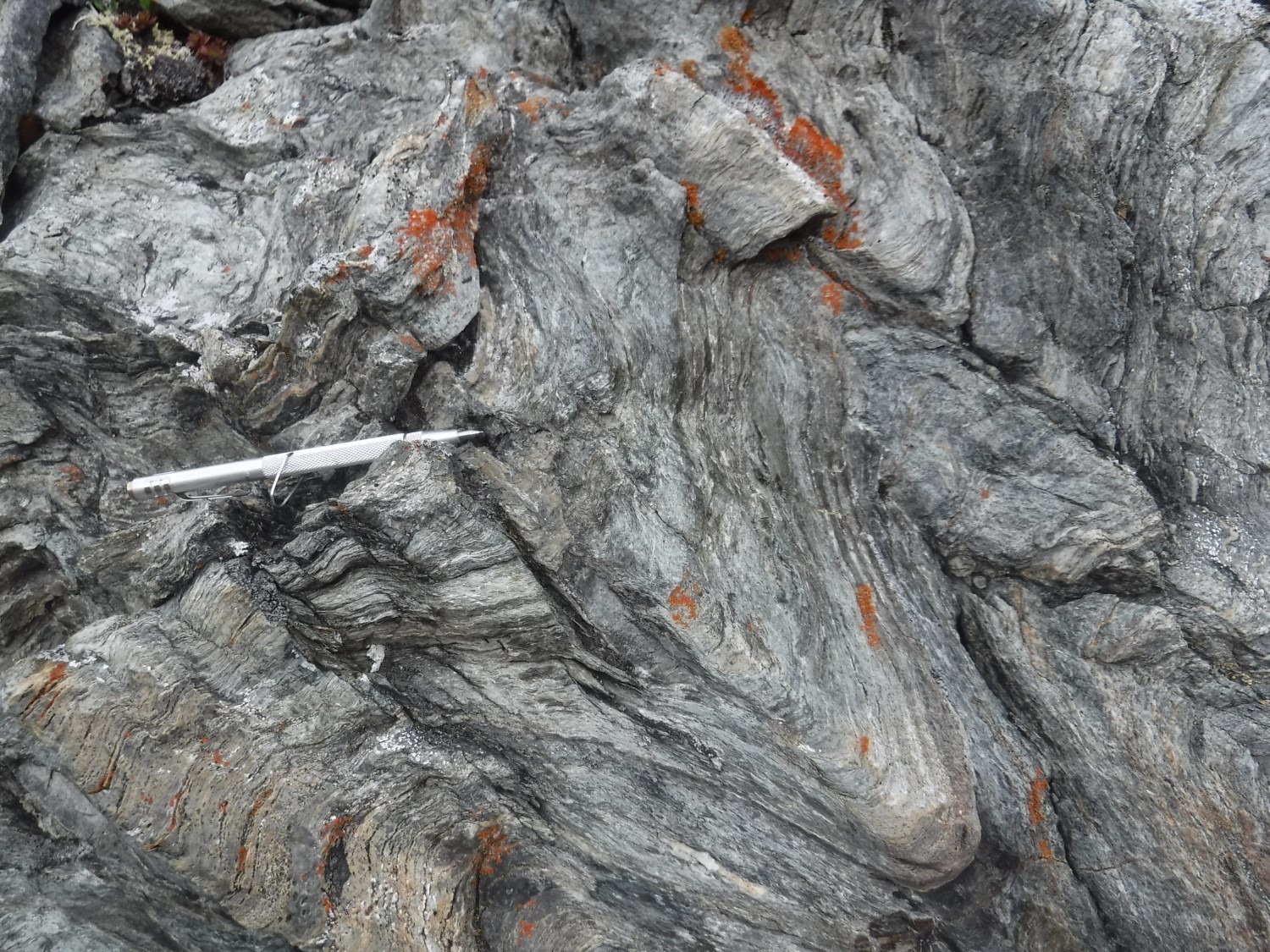 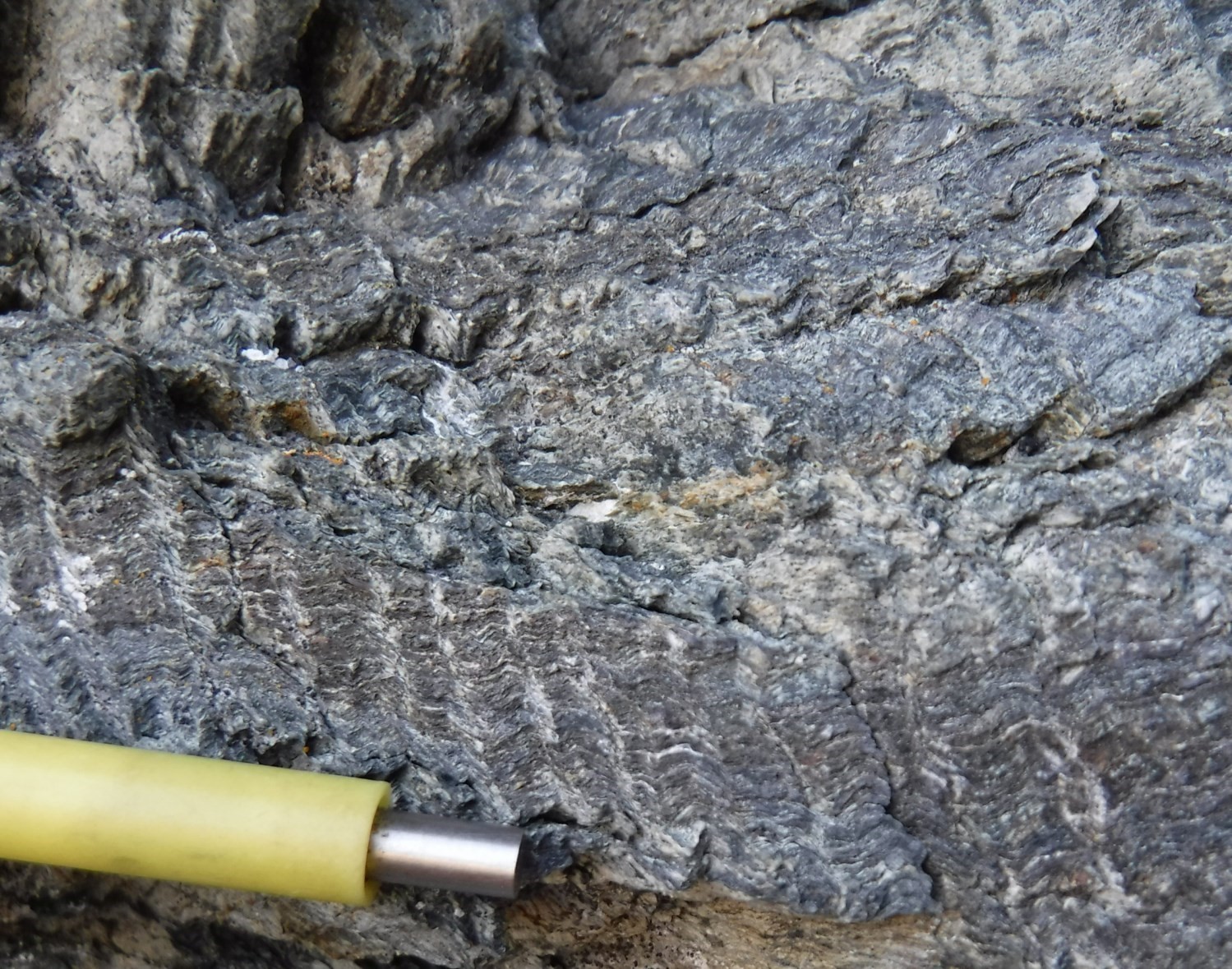 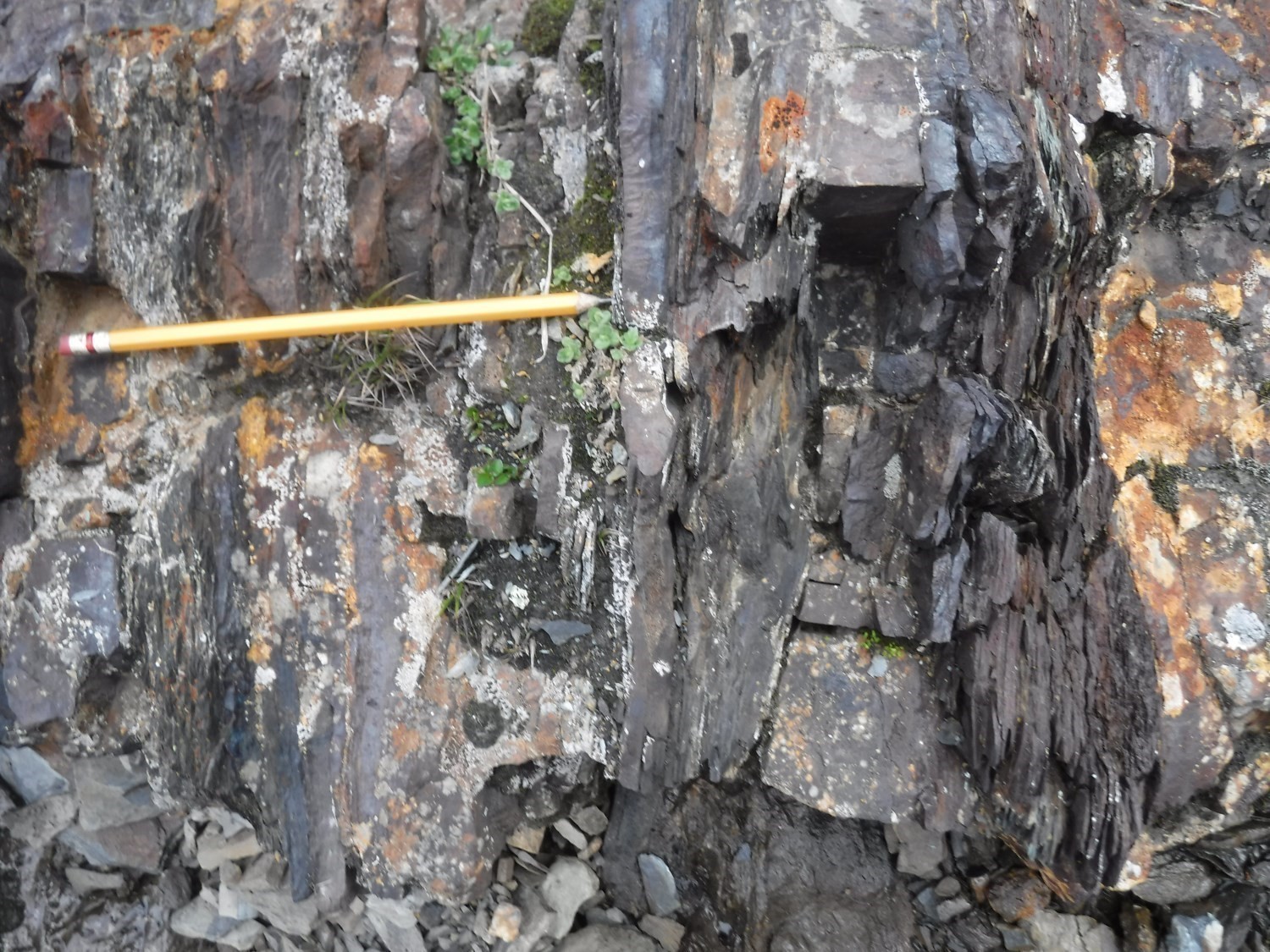 This subdivision consists of a clastic sedimentary sequence composed of dark laminated phyllite, wacke, conglomerate, sandstone and mudstone. Wacke generally contains a high proportion of ferromagnesian minerals, which could come from mafic volcanics of the Parent Group. There is also fine-grained quartzite, whose primary structures are obliterated by a strong schistosity parallel to bedding (Hocq et al., 1994; St-Onge and Lucas, 1993).

The eastern portion was mapped in more detail by Mathieu and Beaudette (2019). It is overthrusted to the north by the Watts Group; to the south, it overthrusts the South Domain Chukotat Group. In this area, the Spartan Group consists of very fine to fine-grained metasedimentary rocks with millimetric to centimetric primary bedding, which is transposed into planes of the main schistosity. The overall appearance is very homogeneous, displaying a medium to dark grey alteration patina, glossy along the main schistosity plane, and light to medium grey in fresh exposure. 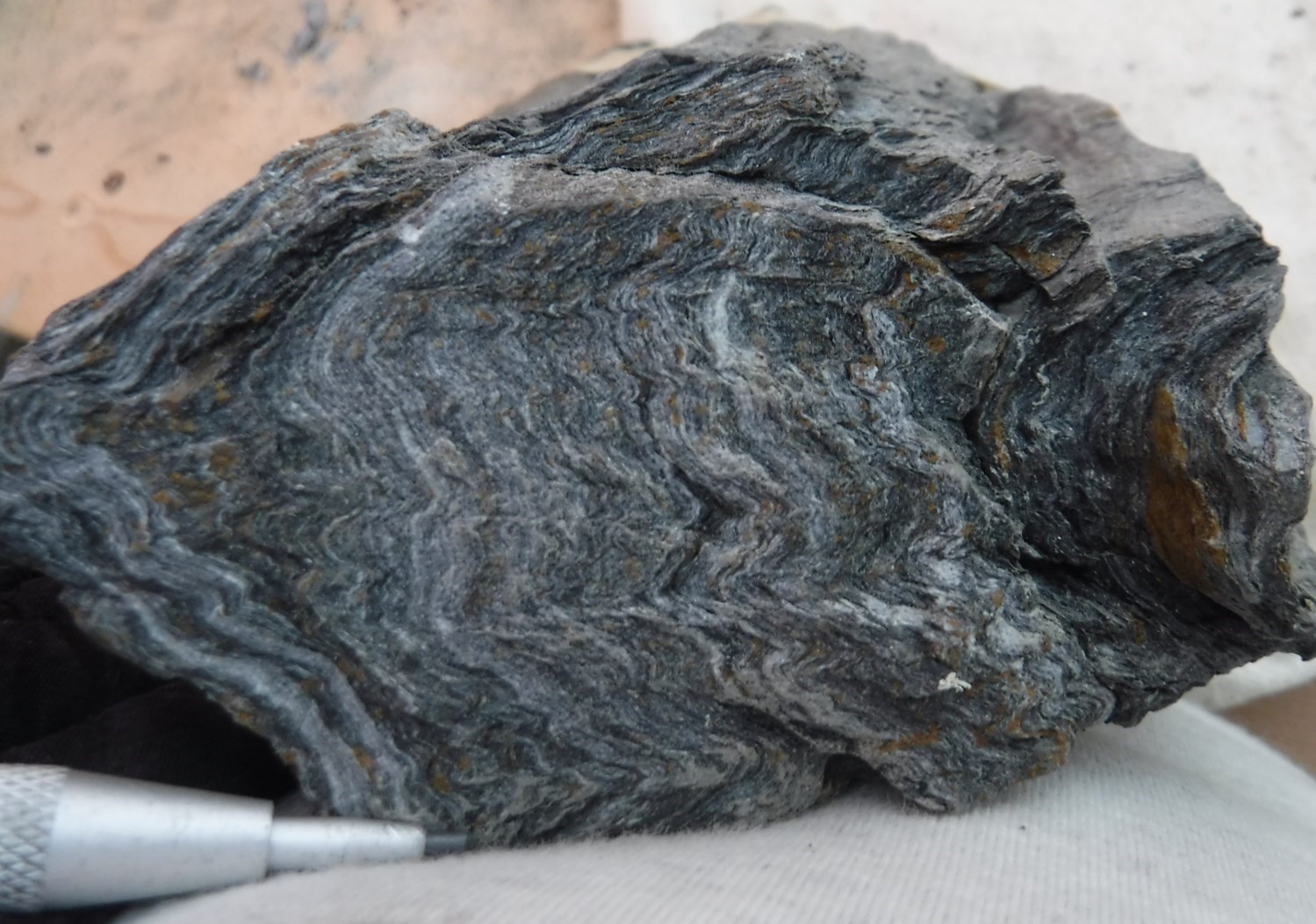 Mathieu and Beaudette (2019) report the presence of ankerite alteration in mudrock, wacke and arenite of the Spartan Group in the eastern part of the metasedimentary band (sheets 35G09, 35G16 and 35H13). Alteration appears weakens towards the extreme east. Poikilitic carbonate crystals (1-5 mm) develop independently of the composition of sedimentary beds. They are synkinematic to post-kinematic. Ankerite is locally oxidized to hematite. 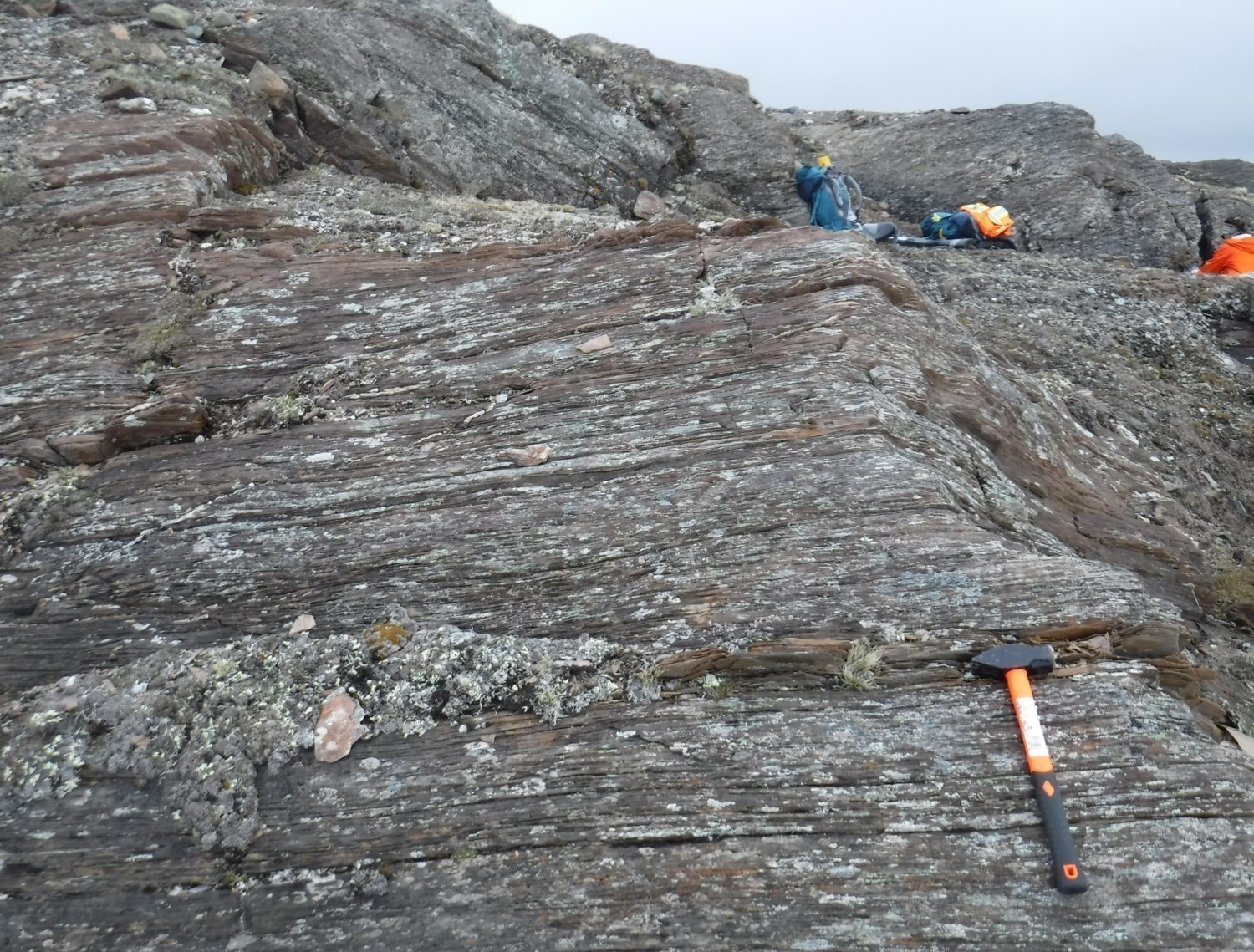 This informal subdivision was introduced by Mathieu and Beaudette (2019) to distinguish dolomite beds reported by earlier authors (Lamothe et al., 1984; St-Onge and Lucas, 1993), more specifically in the vicinity of thrusting of the Watts Group over the Spartan Group, in the eastern portion. This unit outcrops as metric beds interstratified with arenite and wacke of the main unit (pPsp1), the latter being locally mappable when their apparent thickness exceeds several decametres.

The unit has a ochre-brown patina and a brown sugar-coloured fresh surface. Outcrops are characterized by alternating millimetric beds of carbonate (60-85%), as well as varying amounts of quartz (5-25%) and talc (3-25%). Outcrop 18-BC-1060 displays bed truncation in several places, suggesting normal polarity towards the north. Late quartz veinlets and millimetric cubes of secondary pyrite are commonly reported. Carbonate crystals are fine to medium-grained with intergrown margins. They are poikilitic and include very fine quartz grains and talc flakes. Very fine quartz crystals form clusters and discontinuous millimetric beds with a saccharoidal appearance. Thin talc flakes are disseminated or arranged in flexure beds. Finally, it is noted that all primary phases define foliation.

There is little information about this unit. A few felsic crystal or lapilli tuff beds are observed locally (Hocq et al., 1994).

The Spartan Group is divided into three strips that outcrop in the southern half of the Northern Domain. The eastern strip is 55 km long by 4 km wide (sheets 35G10, 35G09 and 35H13). The central area consists of three zones ~20 km long by 5 km wide (sheet 35G11). Located in sheet 35F09, the western strip is 30 km long by 10 km wide. According to Tremblay (1991), the thickness of sedimentary units in the western strip would be ~2000 m. Data from the Quebec Geomining Information System (SIGÉOM) indicate that outcrop zones located in the eastern strip have strong anomalies in potassium and thorium that contrast with the very low contents of mafic units of the Chukotat Group, in the south, and Watts Group, in the north.

The transition between Parent Group volcanics and Spartan Group sedimentary rocks was not observed. The nature of sedimentary rocks reflects a proximal to distal environment (St-Onge and Lucas, 1993; Lamothe, 1994). The Spartan Group’s composition and location on the edge of the Parent Group suggest that it represents an erosional apron on the margins of the volcanic arc (Lucas and St-Onge, 1992; Hocq et al., 1994). To the south, the Spartan Group structural base overthrusts the Chukotat Group along the Bergeron Fault. To the north, the structural top of the unit is overthrusted by the Watts Group.