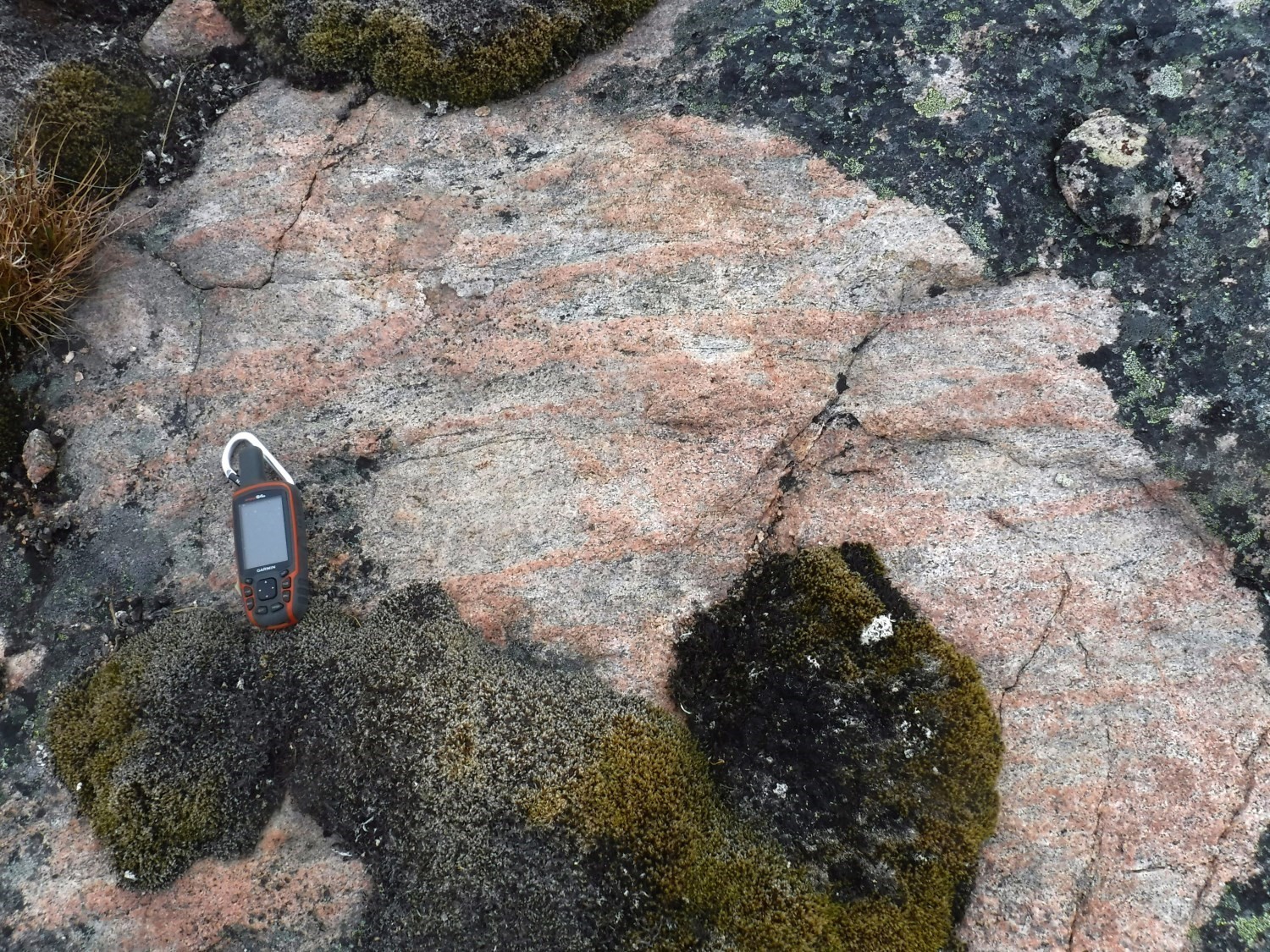 The Tasialuk Allipaaq Complex was introduced by Charette and Beaudette (2018) to describe a heterogeneous assemblage of foliated to gneissic tonalite, granitized and assimilated by tonalitic to granitic intrusive rocks. This assemblage, which forms a large part of the NW Narsajuaq Domain, was previously included in the older suite (pPNAR1) and younger suite (pPNAR4) described by St-Onge and Lucas (1992) and St-Onge et al. (1992).

Lithologies of the Tasialuk Allipaaq Complex show a heterogeneous appearance produced by diffuse or irregular banding and a mottled grey and pink appearance. More specifically in outcrop, there is a greyish, fine-grained foliated to gneissic tonalitic rock (pPali1) in diffuse contact with a coarser-grained heterogeneous rock that varies in composition from greyish white tonalite to pink granite (pPali2). These two units are generally spatially associated and produce a ductile mixture which translates into pink diffuse banding, a change in grain size in centimetric to metric diffuse zone, and a heterogeneous distribution of ferromagnesian minerals in clusters or laminae. Greyish tonalite occurs as diffuse enclaves, partially assimilated, in tonalitic to granitic masses of unitpPali2. These form subconformable to cross-cutting intrusions in sharp to diffuse contact in unit pPali1. This complex of foliated to gneissic rock and intrusive rock appears to result from the intrusion of tonalitic to granitic material in older foliated to gneissic tonalites in the ductile domain. It could therefore represent a magmatic intrusion and assimilation process. 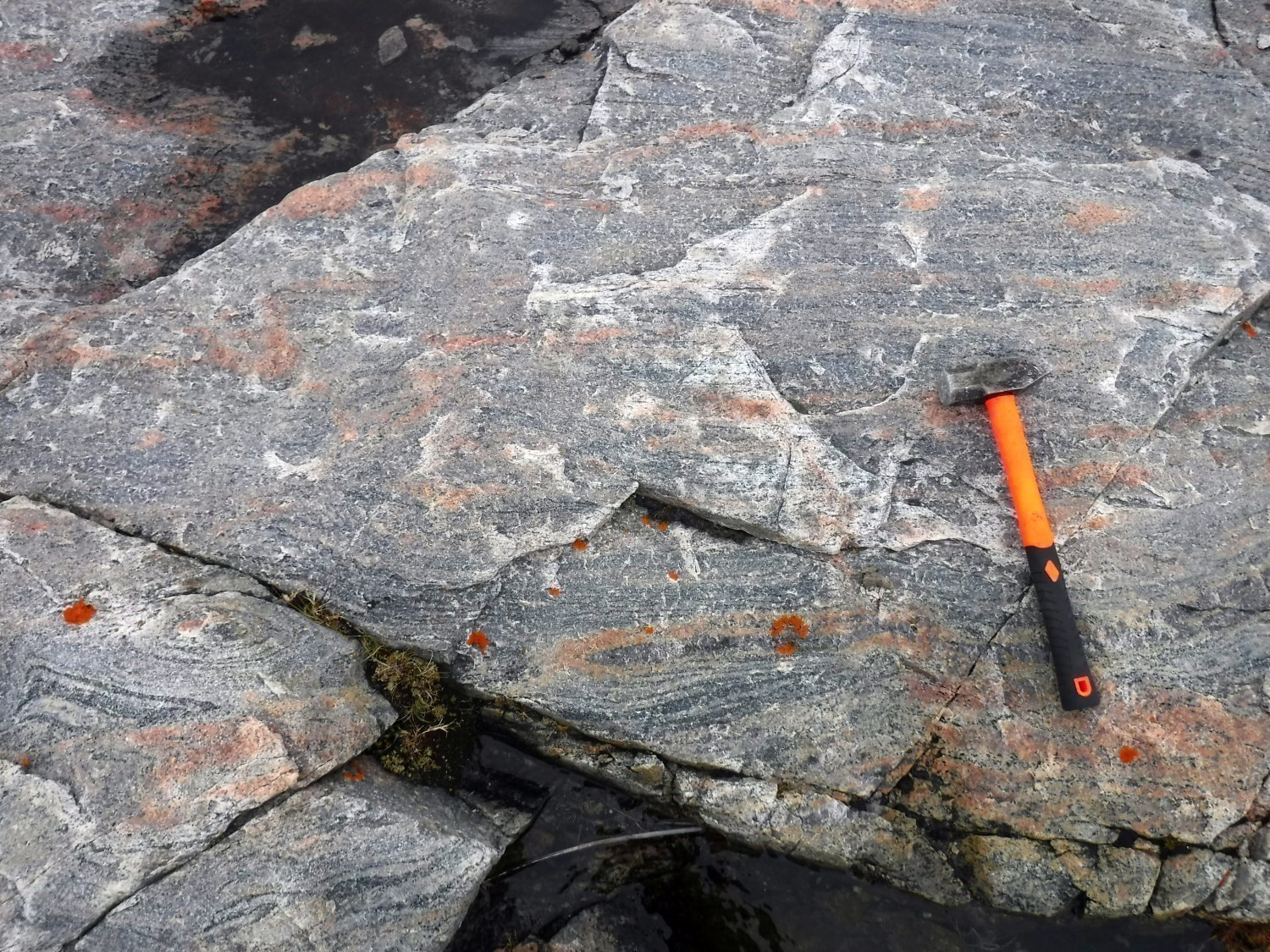 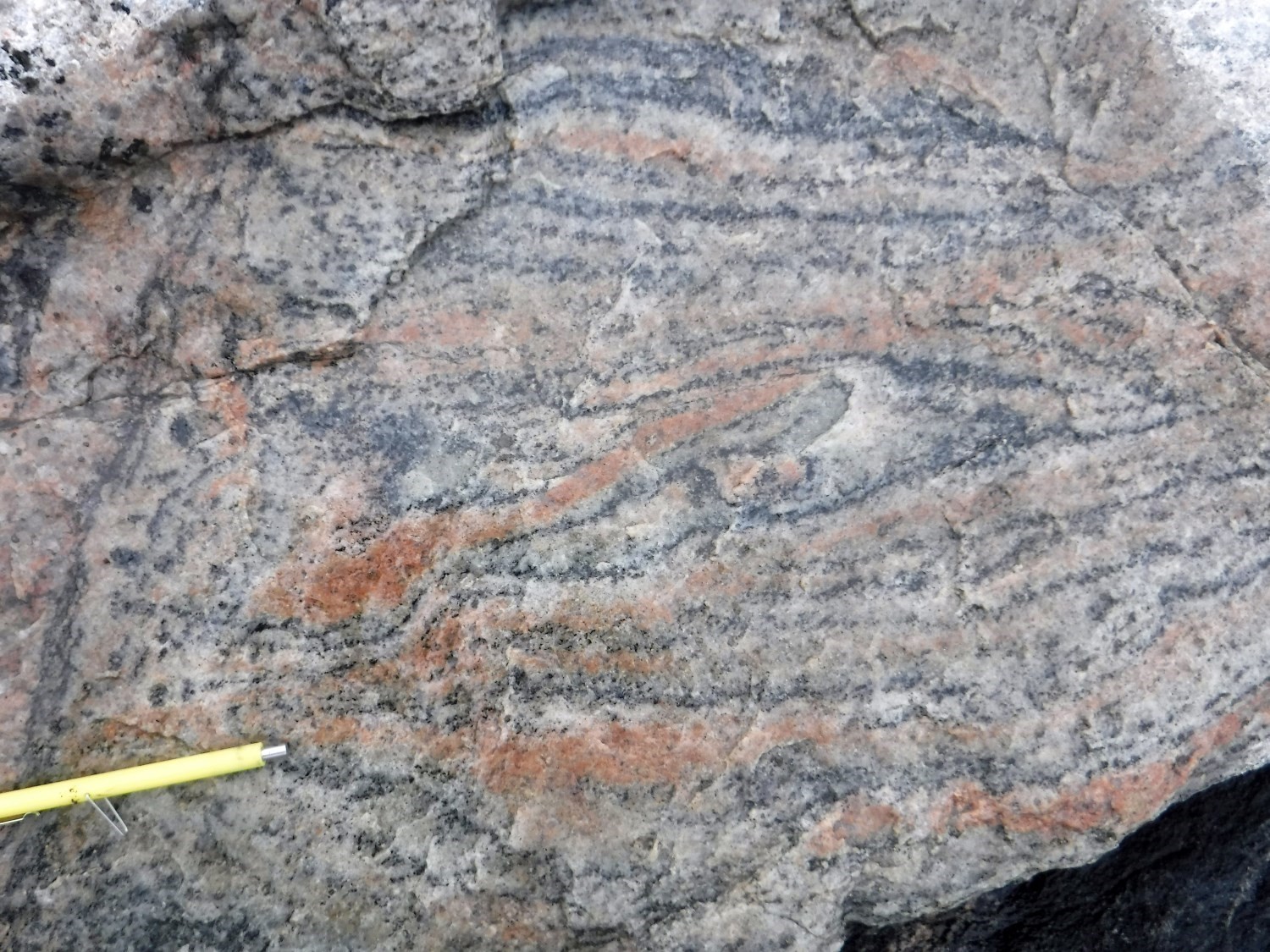 Unit pPali1 consists of fine to medium-grained granoblastic tonalite with a banded to mottled appearance. This texture is produced by the presence of 5-40% millimetric to centimetric band or injection in sharp to diffuse contact with the host rock. The composition of these bands or injections is granitic to, locally, tonalitic and they are generally slightly coarser grained than the host rock. Granite bands include small clusters of ferromagnesian minerals and, locally, 1-2 cm crystals of K-feldspar and plagioclase. In places, a millimetric biotite rim occurs at the contact between granite bands and tonalite. Several outcrops visited include more heterogeneous horizons within tonalite where the proportion of pink granitic material is higher. The lithology then shows a diffuse mottled appearance, commonly undulating or irregular, where it is difficult to distinguish ribbons from the host tonalite.

The host tonalite is foliated to gneissic and is homogeneous to weakly banded in general. Banding within the host rock is marked by the presence of whitish leucocratic bands, by the transitional variation in the proportion of ferromagnesian minerals (5-20%) and, in places, by the presence of centimetric granitic layers of the same grain size. ferromagnesian minerals are disseminated or form millimetric laminae marking the foliation. In thin section, strong recrystallization of minerals is characteristic of unit pPali1 and is distinctive of intrusive rocks of unit pPali2. Biotite is the main ferromagnesian mineral, followed by hornblende. Biotite marks the main foliation as well as a second generally well-developed foliation at 35-40° from the main foliation. Hornblende forms coarser, poikilitic crystals aligned in the main foliation or, in places, anhedral crystals or polycrystalline clusters. Chlorite partially replaces these two minerals. Epidote and sphene are associated with mafic mineral laminae. Accessory phases include apatite, opaque minerals, allanite, zircon and monazite. Accessory minerals represent a very small proportion of mineralogy (maximum 1%).

Unit pPali2 includes tonalitic to granitic intrusive rocks that diffusely intrude into lithologies of unit pPali1. They are either mottled or heterogeneous and speckled. In the first case, the mottled appearance is produced by the presence of a diffuse pinkish phase in bands or clusters of 2 mm to 5 cm. This phase forms 15 to 30% of the lithology depending on the location and locally gives the rock a flow texture appearance. In the second case, lithology looks like a heterogeneous intrusive rock with centimetric clusters of ferromagnesian minerals and centimetric clusters or metric white leucocratic areas. Unit pPali2 commonly exhibits these two textures on the same outcrop. Decimetric to metric horizons and zones of grey banded tonalite are in sharp to diffuse contact within this unit. Also, centimetric to metric enclaves of diorite and hypersthene diorite, elongated in foliation, are commonly observed in these intrusive rocks and account for up to 30% of outcrops.

The petrographic study of pPali2 samples shows that lithologies are made up of two diffuse phases which are difficult to identify in some outcrop. A first phase, tonalitic or granodioritic, is fine to medium grained and contains K-feldspar as small interstitial crystals or as inclusions in plagioclase. A second coarse-grained granitic phase commonly contains centimetric euhedral crystals of plagioclase and K-feldspar. When the rock is mottled, K-feldspar is concentrated in millimetric to centimetric diffuse bands. Ferromagnesian minerals make up <15% of the lithology and occur as discontinuous millimetric laminae (locally looking like schlierens) or as clusters of 5 mm to 3 cm. Magnetite is usually associated with mafic laminae and clusters, or forms crystals visible to the naked eye in the matrix. In thin section, unit pPali2 is characterized by its igneous, little or non-recrystallized appearance, with myrmekite and antiperthite. Hornblende and biotite are the main ferromagnesian minerals and are either aligned in weakly developed foliation or occur as clusters. Hornblende is retromorphosed to biotite and carbonate, while biotite is partially chloritized. Sphene, magnetite, epidote and apatite are associated with them. These minerals can account for up to 5% of mineralogy. In places, allanite occurs as euhedral crystals in the matrix or within ferromagnesian clusters. 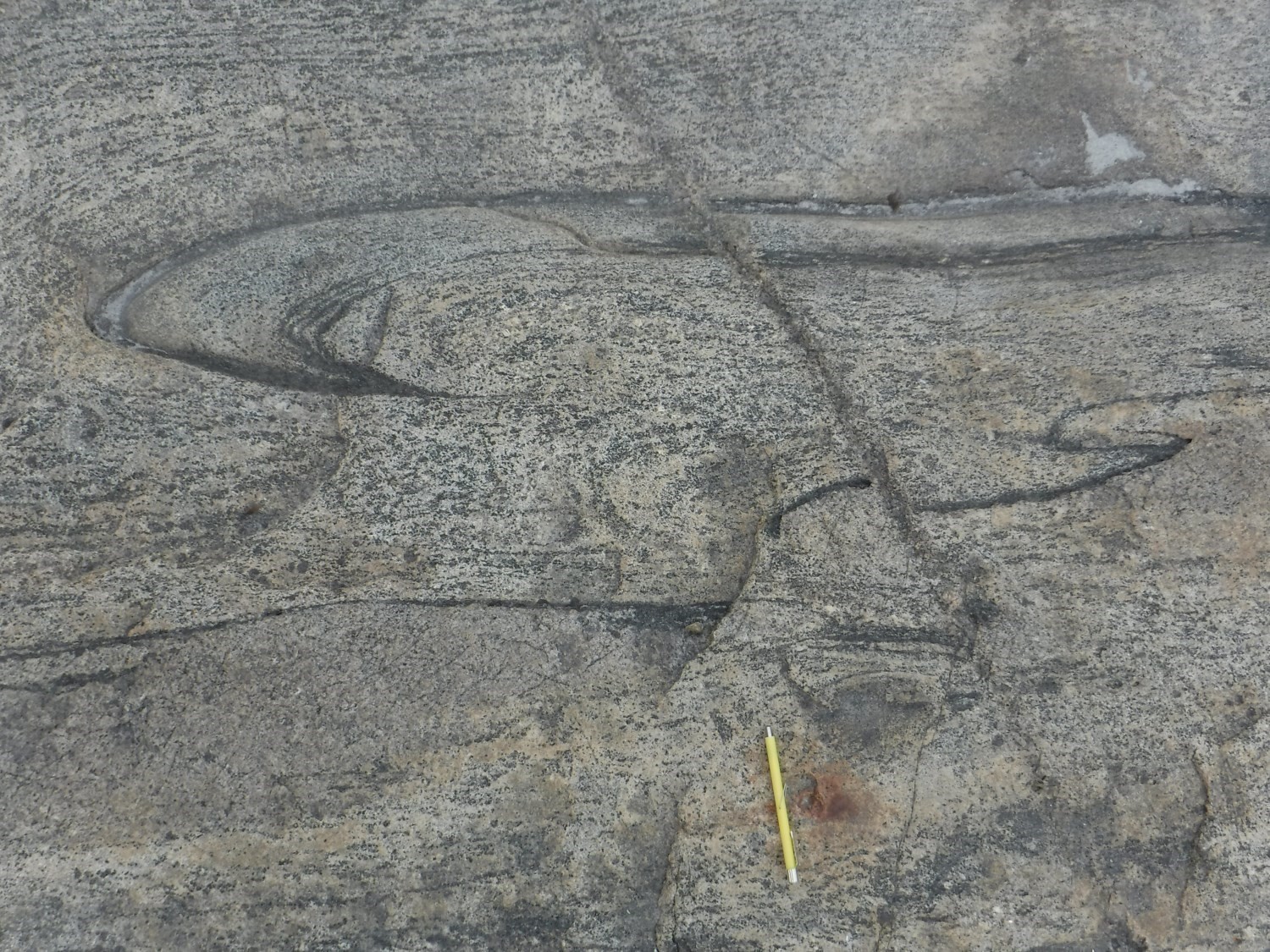 Monzogranite of the Tasialuk Allipaaq Complex is medium grained, pinkish, and has a mottled texture marked by mafic mineral clusters. A flow texture is observed on a few outcrops represented by diffuse and random banding. Centimetric to metric diorite enclaves are either in sharp contact or partially assimilated in monzogranite and account for 3-5% of outcrops. Petrographic studies reveal the presence of granitic bands in diffuse contact. In thin section, mafic mineral clusters contain hornblende, biotite and opaque minerals. Zircon, apatite and allanite occur in varying proportions.

The Tasialuk Allipaaq Complex is present in the NW corner of the Narsajuaq Domain. Intrusive rocks of this complex (pPali2) form large, elongated kilometric masses following the east-west oriented regional foliation, in which are stretched and folded klippes of granulitic rock. Banded to mottled tonalite of unit pPali1 forms klippes that are also contained in unit pPali2.

The Tasialuk Allipaaq Complex includes an older unit (pPali1) and a younger intrusive unit (pPali2). The latter, which may represent the intrusion and assimilation event in the ductile domain, cuts Narsajuaq Domain Neoarchean granulitic units such as the Pingasualuit Complex and Navvaataaq Suite. However, the Tasialuk Allipaaq Complex units are cut by large, decimetric to decametric, late granitic intrusions associated with the Sanningajualuk Suite.