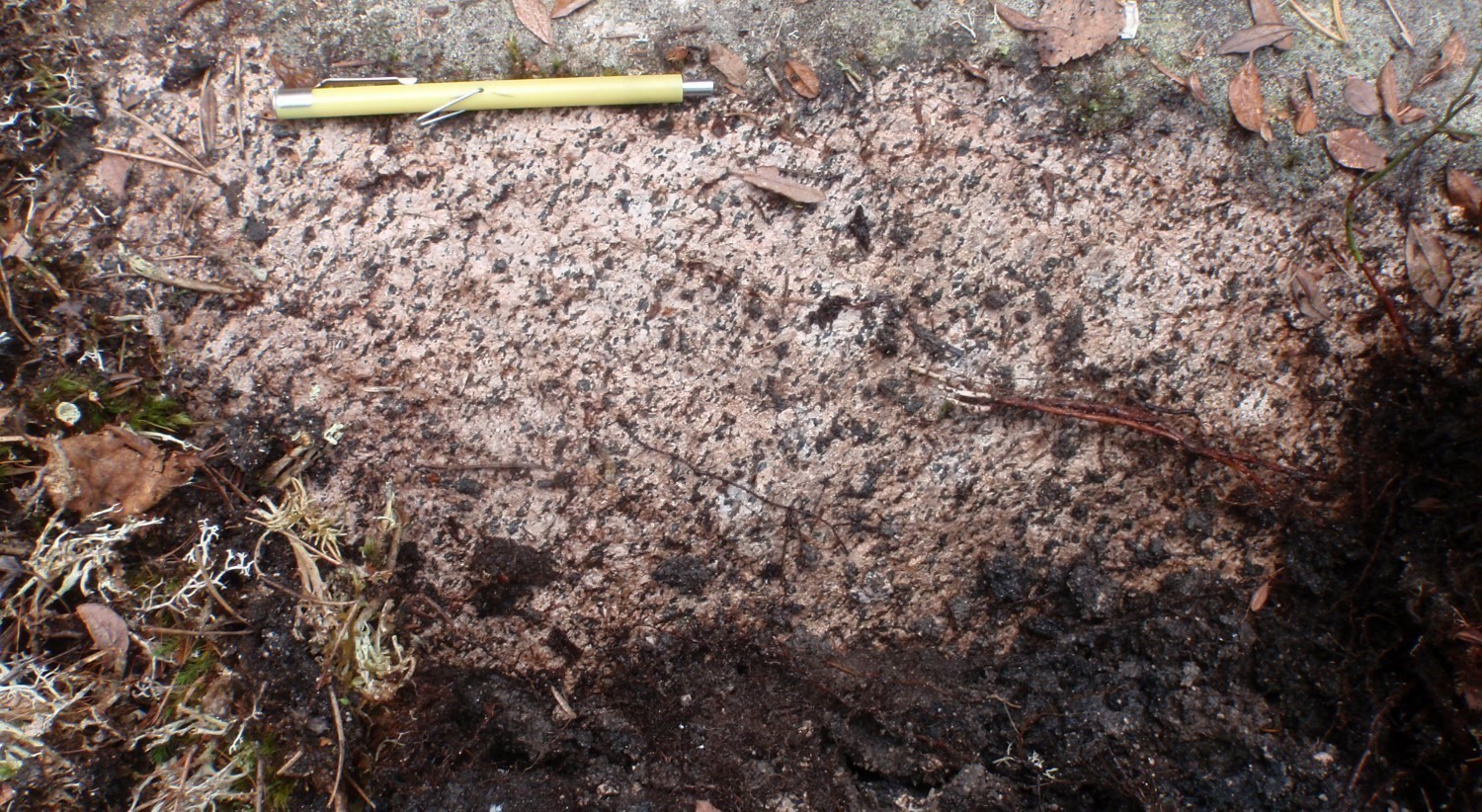 Johannes (1918) acknowledged the existence of acidic plutonic rocks at the location of the Lac de la Perdrix Pluton without its name or precise delineation; it was then included in a enormous mass of “acid batholitic intrusive rocks”, including granite, granitic gneiss, granodiorite, diorite, aplite and pegmatite. In 1934, Backman had identified an intrusion whose boundaries more or less coincided with those of today, at least in its southern half; it was part of an undifferentiated group comprising granite, syenite and granodiorite. Ross (1959) traced the northern contact of the intrusion quite accurately and described it as hornblende syenite surrounded by an essentially dioritic rim. Hocq (1981) later described the pluton as a massive biotite-hornblende tonalite unit containing several volcanic and sedimentary rock enclaves.

The name of the unit is first mentioned in the report of Hocq (in MER 1983) as the “Lac de la Perdrix Massif” in reference to Perdrix Lake located in the centre of the intrsion. The current name “Lac de la Perdrix Pluton” appears for the first time in the geological map of NTS sheet 32D15 produced by Beausoleil and Doucet (1998, in MRNF, 2010). According to the 1/250 000 compilation map of the 32E sheet (MRNF, 2010), this puton consists of quartz monzodiorite to monzonite. Deschênes et al. (2014) distinguish two main units: hornblende-clinopyroxene quartz monzodiorite and monzonite (nAper1), and gabbro and pyroxenite (nAper2). However, the existence of the nAper2 unit was based on few observations, leading to its abandonment. Guemache (2020) recognized two units to the Lac de la Perdrix Pluton, which are described below.

The Lac de la Perdrix Pluton is divided into two informal units: the first (nAper1) consists of biotite-hornblende quartz monzonite and quartz monzodiorite, occupies the core of the intrusion and is characterized by low residual magnetic field intensity; the second (nAper2) consists of biotite-hornblende-clinopyroxene ± orthopyronene monzodiorite and monzonite, occupies the edge and some central areas of the intrusion and is distinguished by relatively high magnetic susceptibility. 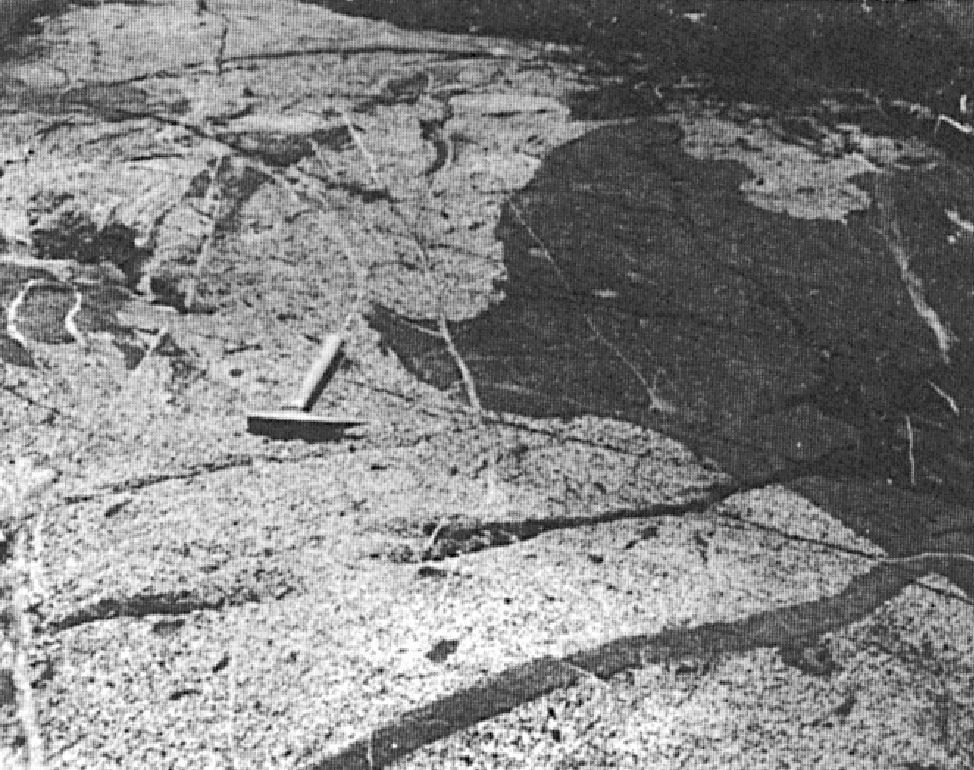 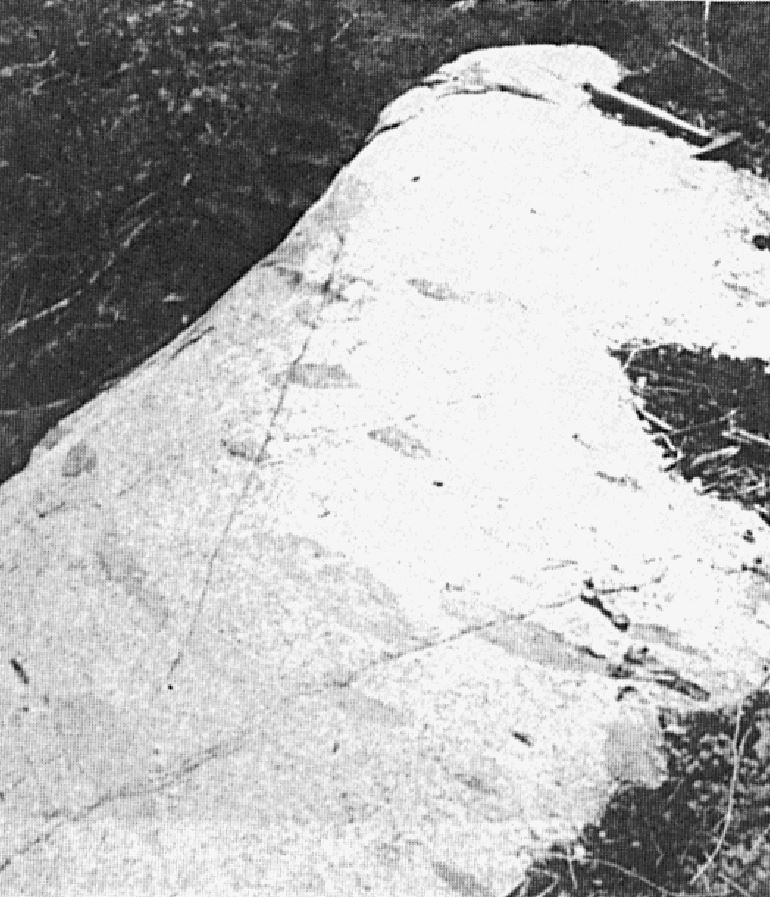 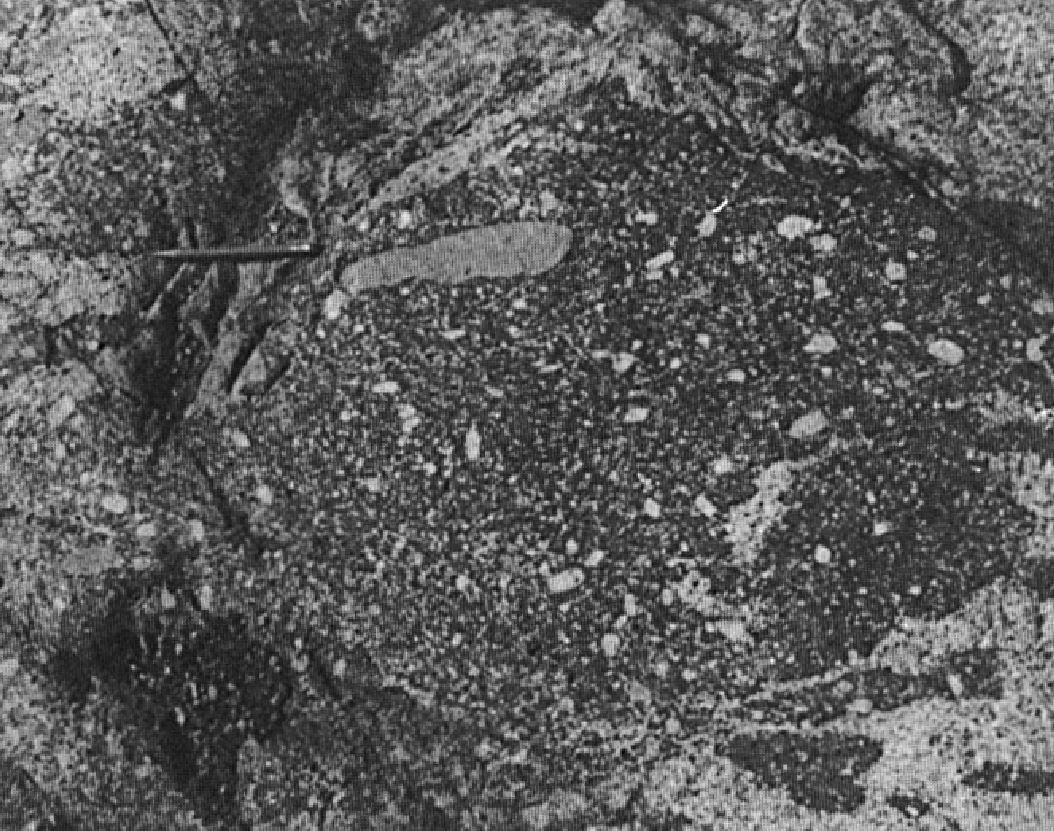 The pluton contains numerous enclaves. According to Hocq (in MER, 1983; pages 243-244): “This intrusion contains frequent enclaves, little or not recrystallized, of mafic rocks (meladiorite, hornblendite), especially in the central and eastern parts of the massif. Numerous mesoscopic lava enclaves located in the contact zone as small ellipsoids or stretched bands a few metres long. These are sprinkled with euhedral feldspar crystals that crystallized during a late metasomatism phase. Some large biotite-garnet gneiss enclaves, arranged parallel to foliation, meet near contact in the eastern part of the intrusion. These enclaves could be the equivalent of tuffs or metamorphosed sediments.” The presence of volcanic rock enclaves in the eastern part of the intrusion was already mentioned in the map of Backman (1934). Several others were also mentioned in recent outcrop descriptions (e.g., outcrop 2012-PL-1032). 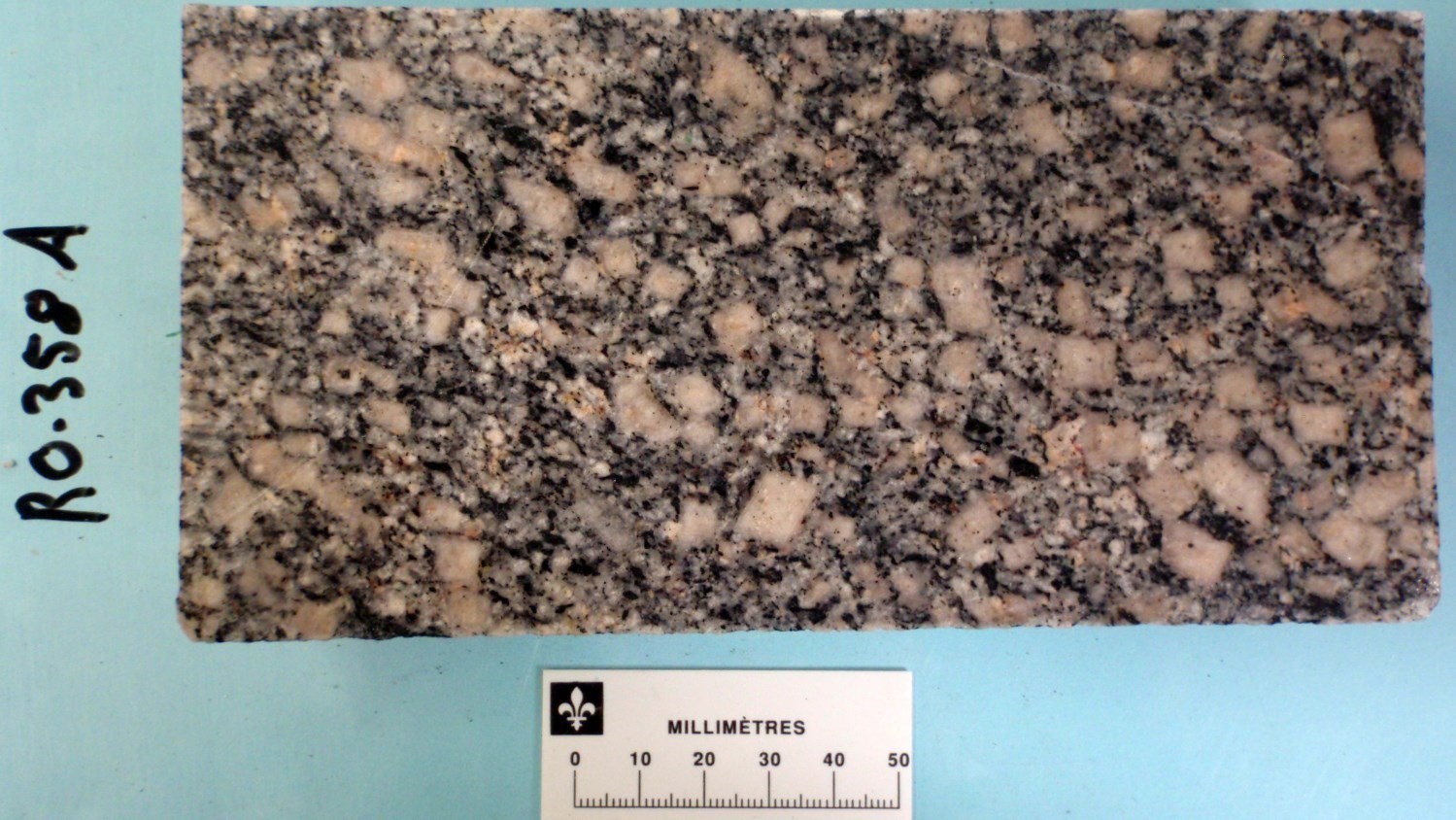 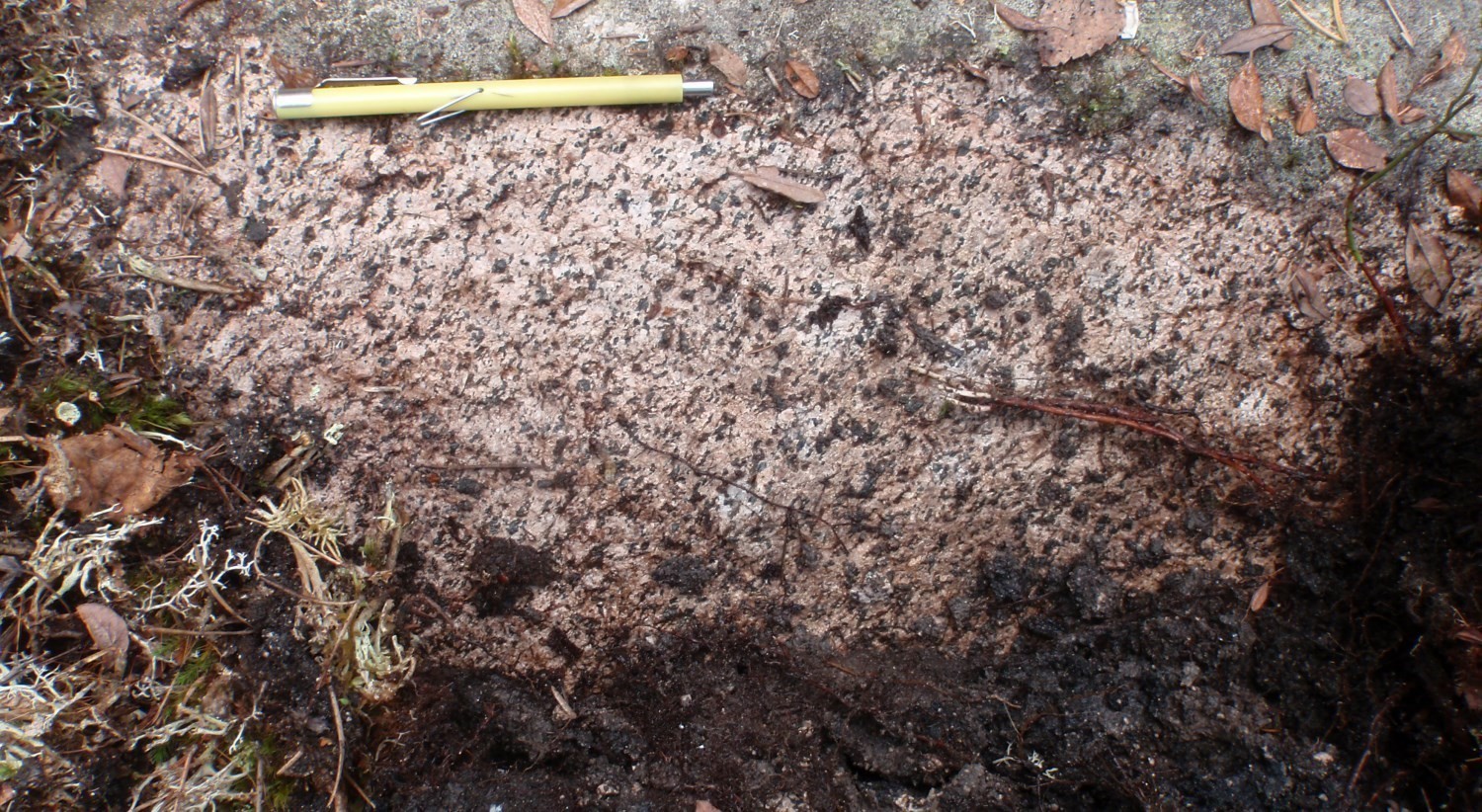