The search for diamond-bearing kimberlite began in 1996 on the Foxtrot property during the work of Ashton Mining Canada and SOQUEM. The Renard 1 and Renard 2 pipes were discovered by drilling in September 2001, followed by Renard 3 to 10 pipes in 2002. The Lynx Dyke was discovered in 2003 and the Hibou Dyke in 2005. The name “Renard” refers to the property name (“Foxtrot”) where kimberlite pipes were discovered.

All of these kimberlitic intrusions were grouped within the Renard Kimberlite unit following the 2016 mapping work by Talla Takam et al. (in preparation). The presence of ten separate geological bodies favoured its designation as a suite. At this point, however, the distribution of these various intrusions over a limited area (<20 km2), their relatively uniform composition and the mapping scale do not seem to justify the definition of formal (lithodemes) or informal units. 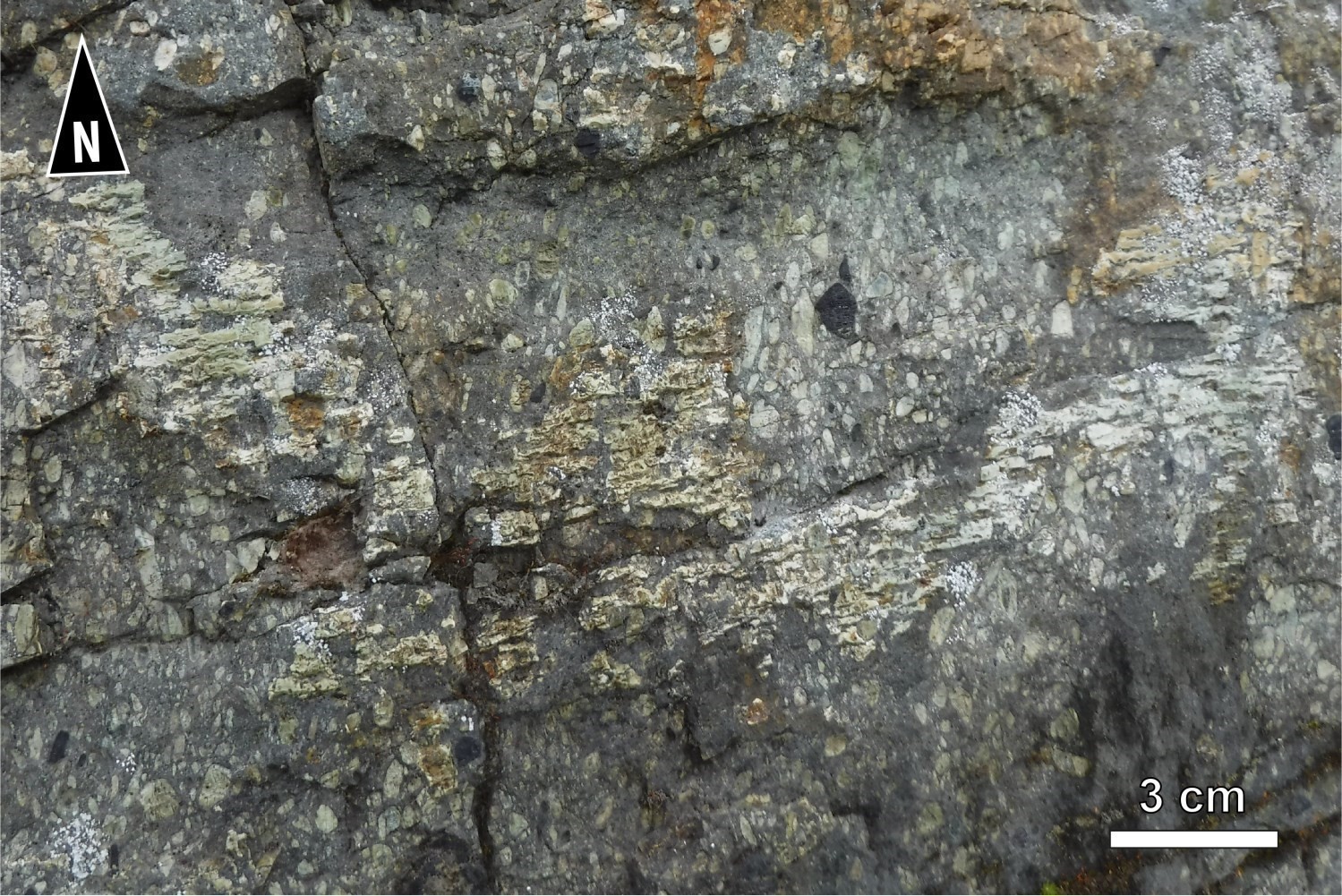 Pipes are quite similar and can be classified as “tuffaceous kimberlitic breccia” (TKB), a subcategory of massive volcaniclastic kimberlite (MVK) characterized by the presence of clinopyroxene in the rock matrix. These coarse to very coarse-grained kimberlites are massive and very altered. They are mainly composed of olivine and poorly sorted xenoliths. In most pipes, additional, more coherent olivine-rich and xenolith-poor kimberlitic phases can be distinguished, as for centimetric to decimetric hypabyssal facies intrusions (Godin et al., 2016). 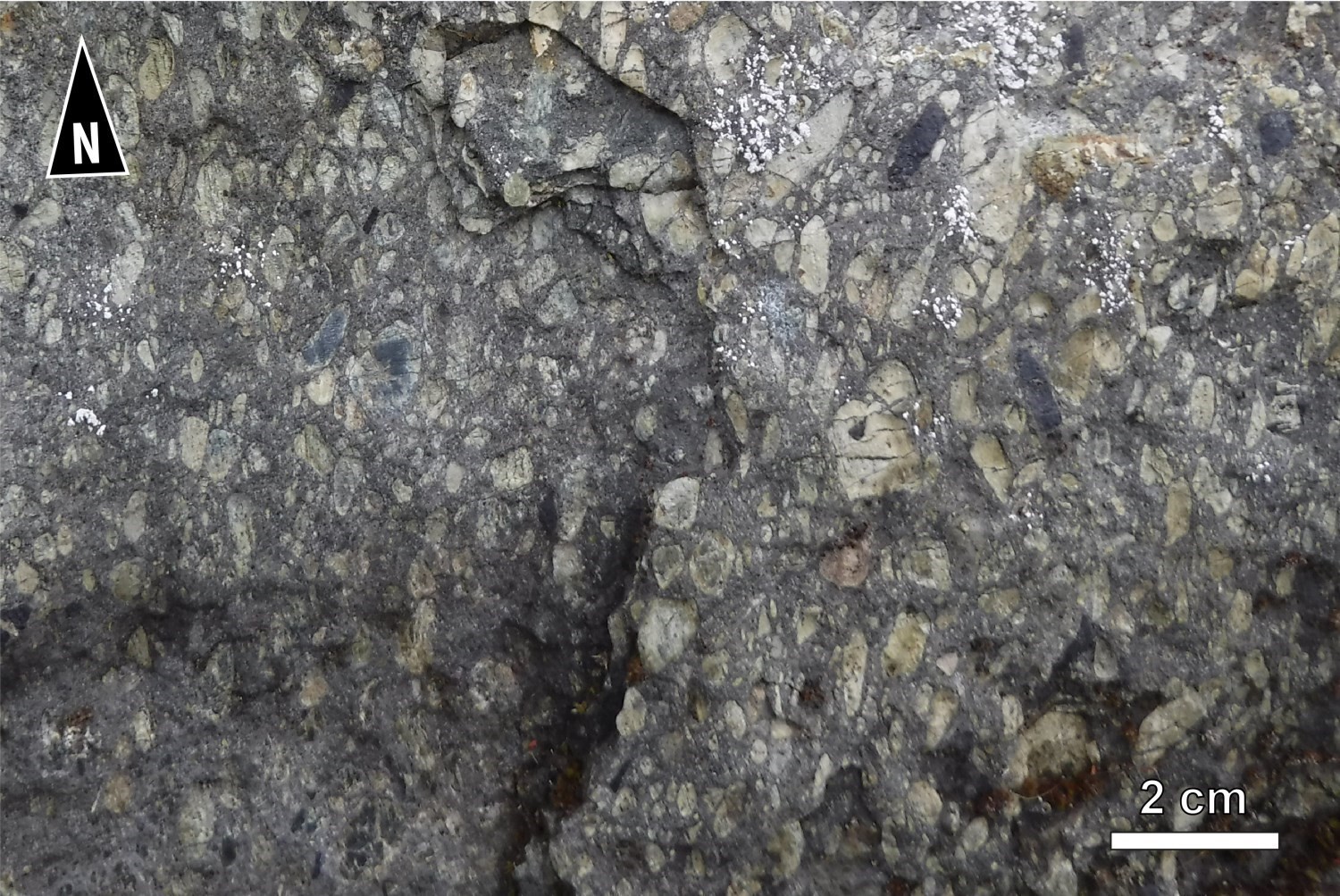 The Lynx Dyke is NNW-SSE oriented and has an eastward 10–50° dip. The rock has a hypabyssal facies (HK) and a dark grey to dark green colour, in both fresh and altered surfaces. It has a brecciated texture and, locally, a layered aspect related to magma creep and marked by more or less fragment-rich horizons. Kimberlite is mainly composed of completely serpentinized subrounded olivine macrocrystals up to 1.5 cm, representing 0 to 50% of the rock (25% on average). That percentage is varies strongly. Pyroxene (primarily chromiferous diopside), magnetite, pyrope and picroilmenite are usually observed and represent up to 3% of the rock. The rock also contains subrounded xenoliths of various composition, usually granitic or gneissic, representing 1 to 5% of the rock. All these minerals are fixed in a fine-grained matrix. Under the microscope, the matrix is dominated by carbonates (15–35%), serpentine, monticellite, ilmenite and phlogopite. Olivine is pseudomorphosed to serpentine and locally altered to carbonate; it has a preferential orientation subparallel to the dyke orientation. Accessory minerals include perovskite, spinel and apatite (Patterson et al., 2009). The matrix is also cut by white carbonate veinlets. The contact between kimberlite and the surrounding rocks is marked by fractures parallel to the contact and joints perpendicular to the contact.

The Hibou kimberlitic Dyke, which is E-W oriented and has a northward dip of ~10°, shows variable degree of alteration and fracturing. It is grey-green to green and is highly magnetic. As with the Lynx Dyke, it is mainly composed of olivine crystals (25% on average) in a carbonate-rich matrix. It has the same petrographic characteristics as the Lynx Dyke, except for the less altered olivine macrocrystals. The Hibou Dyke is also locally cut by hematite black veins (Patterson et al., 2009).

The Renard Kimberlite forms a group (cluster) of dykes and pipes located in the centre of sheet 33A16 around Kaakus Kaanipaahaapisk Lake. The Lynx Dyke, NNW-SSE oriented, is 1.8 m thick on average and extends over a maximum distance of 4.2 km (Farrow, 2010). The Hibou Dyke, more or less E-W oriented, extends over 1.9 km and has an average thickness of 2 m (Godin et al., 2016). Kimberlitic pipes have no real surface expression because the crater facies has been eroded by glaciers. The geological map therefore shows their projected extension.

The pipes and dykes of the Renard Kimberlite intrude into Archean migmatites and paragneiss of the Laguiche Complex (nAlg2a).