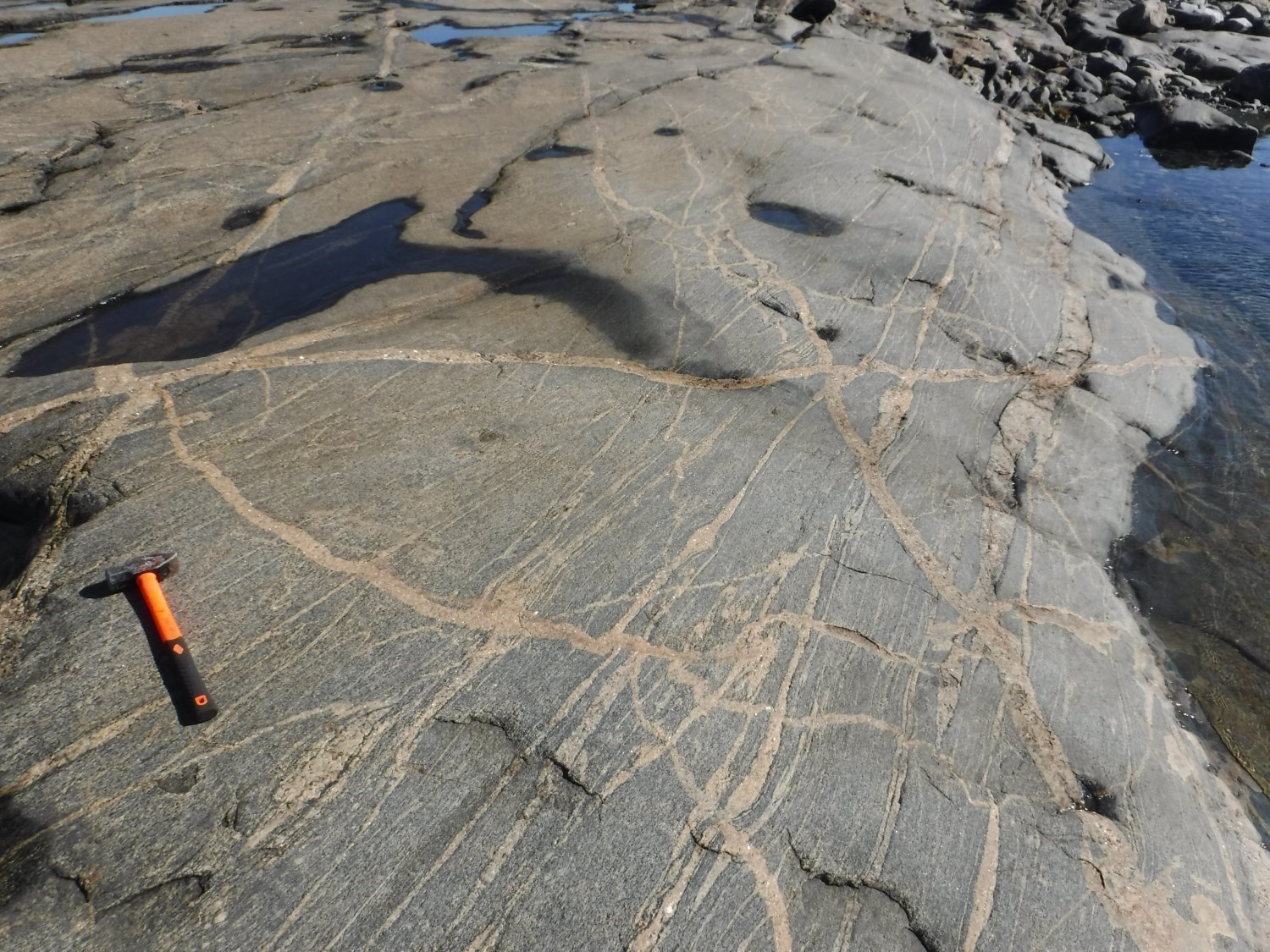 The Nallujuaq Suite, whose namesake lake is located south of the most important masses of this unit (NTS sheet 35F13), was introduced by Charette and Beaudette (2018) to characterize the local porphyraceous banded units of the Narsajuaq Lithotectonic Domain. Prior to mapping from these authors, these rocks were mostly included in the Younger plutonic suite of the Narsajuaq Arc described by St-Onge and Lucas (1992) and St-Onge et al. (1992).

Lithologies of the Nallujuaq Suite have a well-developed foliation marked by mafic mineral laminae and by pink bands in sharp contact (nAnal1). Subunit nAnal1a consists of horizons containing K-feldspar phenocrystals. 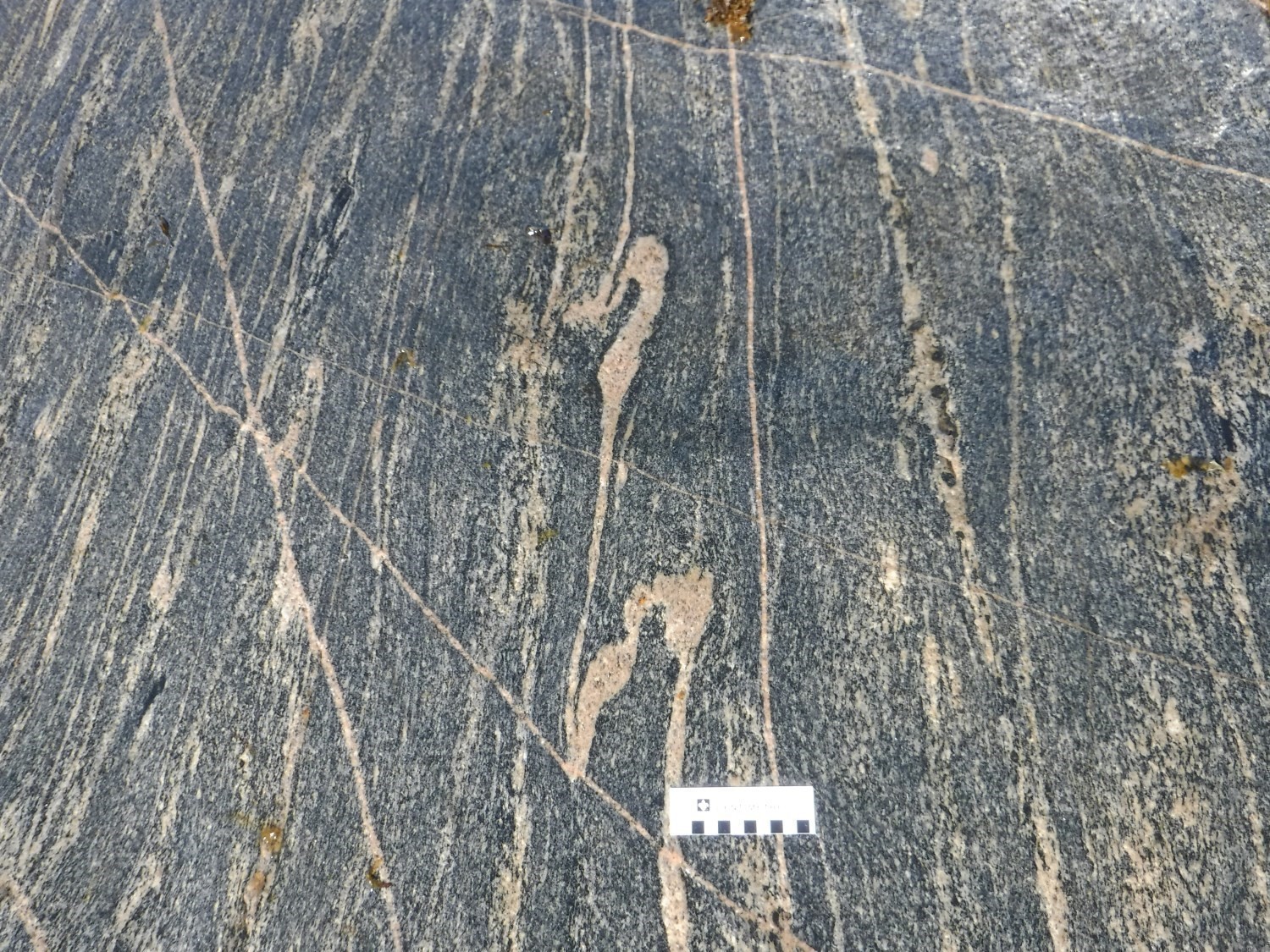 Granodiorite and quartz monzodiorite of unit nAnal1 are typically medium to medium-dark grey with pink bands. A brownish altered surface is locally observed in transitional contact with the typical grey lithology with pink bands. The foliation, well developed and marked by 15-25% ferromagnesian minerals, as well as banding are characteristic of this unit. Bands are millimetric to centimetric, granitic to tonalitic and make up for 10 to 15% of the lithology. On some outcrops, they are in diffuse contact and are difficult to differentiate from the host rock, which gives a migmatitized appearance to the rock. On these outcrops, pink bands are folded or chaotic in some areas and appear to form a stromatic texture. On the other hand, unit nAnal1 has a gneissic appearance when the felsic bands are continuous and parallel to the foliation. In these cases, bands are usually in sharp to diffuse contact and conformable to foliation. Locally, bands are rather whitish, discontinuous and lenticular.

In thin sections, the matrix is moderately to well recrystallized and the main ferromagnesian minerals are hornblende and biotite. They are mainly disseminated, in clusters or in thin discontinuous laminae. In all cases, they are elongated in the foliation’s direction. Quartz forms zones also elongated in the foliation. Opaque minerals are present in significant proportions and are associated with ferromagnesian mineral clusters. Trace minerals are apatite, zircon and allanite.

On some outcrops, unit nAnal1 includes more mafic dark grey layers, metre to kilometre-thick. They are spatially associated with unit nAnal1 and are in transitional contact. They are dioritic and contain clinopyroxene; locally, relic orthopyroxene is visible in the core of hornblende crystals. These hlayers have, in places, a brownish colour characteristic of rocks containing orthopyroxene, similar to nAnal1 granodiorite and quartz monzodiorite. 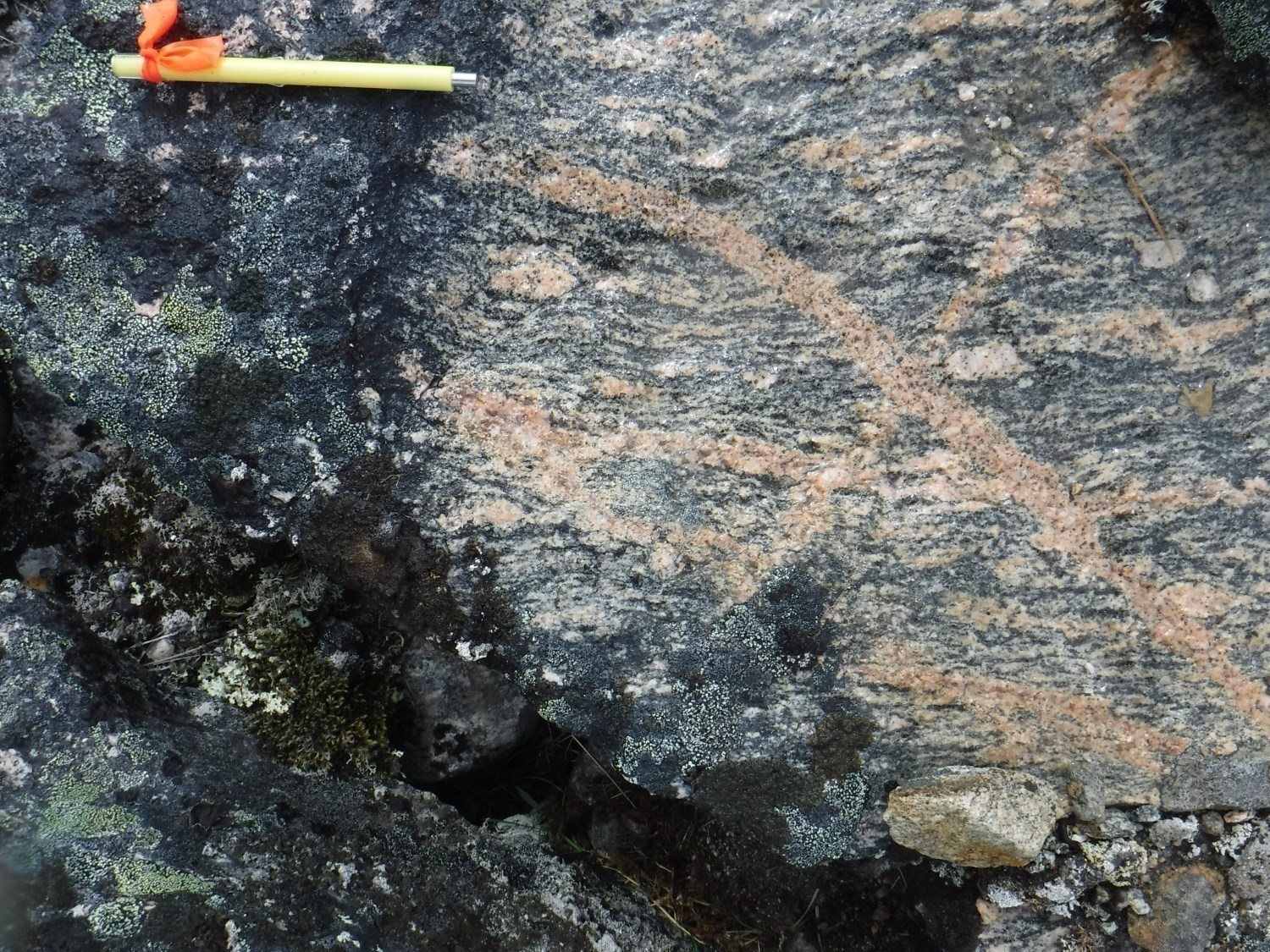 Subunit nAnal1a is similar to unit nAnal1 but is porphyraceous. It occurs as sharp to diffuse layers in unit nAnal1. K-feldspar phenocrystals are millimetric to centimetric and account for 5 to 10% of the rock composition. They are locally porphyroclastic in more deformed zones and are associated with pink granitic bands. Locally, feldspar porphyroclasts have a recrystallized rim. The main ferromagnesian minerals are biotite and hornblende, followed by opaque minerals and apatite. These are concentrated in laminae or clusters.

Granodiorite and quartz monzodiorite (nAnal1) occur as kilometre-thick stretched masses and scattered klippes in the western portion of the Narsajuaq Lithotectonic Domain. Porphyraceous granodiorite (nAnal1a), on the other hand, is smaller and forms sub-kilometre-thick klippes, stretched and folded in the E-W regional tectonic grain. The latter is predominantly present in the centre of the arc in the northern portion of sheet 35K04.

U-Pb analyses of a granodiorite sample collected by Charette and Beaudette (2018) in the Cape Wolstenholme area give an age range from Neoarchean to Paleoproterozoic. Davis and Sutcliffe (2018) divided zircons into two populations on the basis of Th/U ratios. The protolith is Neoarchean, and Paleoterozoic metamorphism resulted in Pb loss via diffusion.

Few contacts or crosscutting relationships were observed between the Nallujuaq Suite and other units of the Narsajuaq Lithotectonic Domain. This suite is currently interpreted as sharing a tectonic contact with paragneiss of the Erik Cove Complex (pPecv) and with orthogneiss of the Sainte-Hélène Complex (Ashn). In addition, klippes of charnockite (nAsir1) and gabbronorite (nApgs1) are contained in the Nallujuaq Suite. Unit nAnal1 enclaves are visible in kilometric granitic intrusions of the Sanningajualuk Suite (pPsnn1), while porphyraceous and porphyroclastic granodiorite (nAnal1a) enclaves occur in heterogeneous tonalite and granite of the Tasialuk Allipaaq Complex (pPali2). All units of the Nallujuaq Suite are cut by pegmatite intrusions.