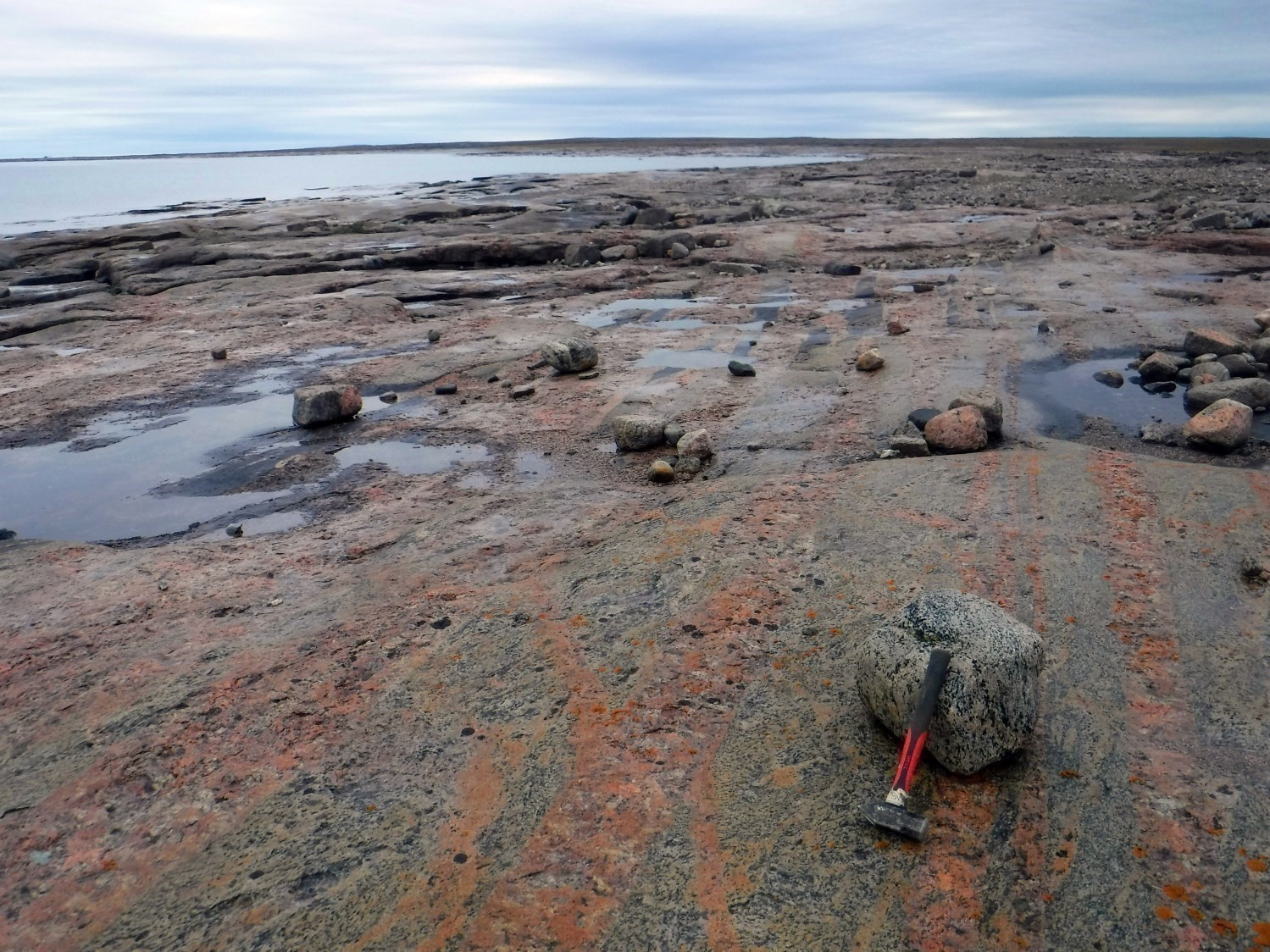 The Narsajuaq Complex was introduced by Charette and Beaudette (2018) to designate geological units mapped during previous work. These units were previously included in the Narsajuaq Arc, which was defined as a cartographic unit in the synthesis of the Ungava Orogen (Lamothe, 2007). However, Charette and Beaudette (2018) have abandoned this definition of the Narsajuaq Arc, considering it more of a lithotectonic domain. The “Narsajuaq Complex” stratigraphic unit was therefore introduced to comply with the North American Stratigraphic Code (2005).

In areas mapped at scale 1:100 000 by the Ministère since 2017, lithologies located in the western part of the Narsajuaq Lithotectonic Domain were instead divided into complexes and suites, the main ones being the Pingasualuit, Tasialuk Allipaaq, Sainte-Hélène and Estre complexes, as well as the Suluraaq, Nallujaq, Navvaataaq and Sanningajualuk suites. Further geological mapping will help define the various units belonging to the Narsajuaq Complex and assign them to separate suites; the Narsajuaq Complex will eventually disappear.

The main lithology of the older suite, and of the Narsajuaq Complex as a whole, is a well-banded sequence of tonalite and quartz diorite in which conformable and unconformable granitic veins are found (St-Onge et al., 1992). Units in the older suite have a very homogeneous composition and texture over a length of >250 km. A penetrative tectonic foliation at the granulite facies, parallel to compositional banding at the outcrop scale, characterizes most plutonic rocks of the Narsajuaq Complex (Lucas and St-Onge, 1995).

The older plutonic suite consists of unit pPnaq1 gneiss, an assemblage of banded rocks (tonalite and quartz diorite) cut by felsic veins of mostly monzogranitic composition. Gneiss consists of 70-80% biotite ± hornblende tonalite. Locally, there is a dominance of hornblende ± biotite quartz diorite. Bands are decametre to centimetre thick. Diorite layers are usually boudinaged and surrounded by tonalite. Decimetric to metric layers of biotite granodiorite, amphibolite, pyroxenite and peridotite are observed in places. Mafic-ultramafic rocks are in places found as enclaves (St-Onge et al., 1992; Lucas and St-Onge, 1997).

The younger plutonic suite cuts the older plutonic suite as well as metasedimentary rocks of the Sugluk Group. Unlike the older plutonic suite, they consist of isolated kilometric plutons, usually tabular and occurring as sheets. This younger suite contains 50% monzogranite, 35% mafic plutons (quartz diorite and monzodiorite) and 15% tonalite. Plutons in the younger suite show varying degrees of deformation from massive to very foliated. In addition, plutons are composed of various enclaves from the older suite, the Sugluk Group, deep crust lithologies and comagmatic rocks (pyroxenite, diorite, tonalite). Based on the size and degree of homogeneity of the intrusions of the younger plutonic suite, it is believed to have developed in shallow levels of the crust (Lucas and St-Onge, 1997).

Diorite intrusions are primarily located in the southern part of the Narsajuaq Domain, near the tectonic contact with the Cape Smith Belt. The degree of deformation varies from massive to highly deformed, depending on the proximity of collision faults (Lucas and St-Onge, 1997). Quartz diorite intrusions contain pyroxenite, diorite and tonalite enclaves (St-Onge et al., 1992).

Monzogranite intrusions alternate with gneiss of the older suite (pPnaq1) and tonalite of the younger suite (pPnaq3). Monzogranite is composed of hornblende, biotite and clinopyroxene, even grained and medium grained. The texture can be megacrystalline towards the centre of intrusions with an abundance of K-feldspar phenocrystals. Monzodioritic intrusions have smaller dimensions (~2 km) along the Narsajuaq Valley, in the southern part of Sugluk Inlet (Lucas and St-Onge, 1997).

Plutonic rocks in this suite consist of small granitic plutons and late-tectonic to post-tectonic, even-grained to pegmatitic veins or dykes. This suite is generally not deformed and not metamorphosed (Lucas and St-Onge, 1997).

In the late suite, one of the monzogranite plutons in the Duquet Lake area, ~2.5 km in diameter, is egg-shaped, undeformed and non-metamorphosed. The pluton zircon U-Pb dating indicates a crystallization age of 1742.2 ±1.3 Ma (Dunphy et al., 1995). It is potassium-rich, hyperaluminous and has geochemical characteristics similar to continental crust-derived granites (Lucas and St-Onge, 1997).

The Narsajuaq Complex is located in the northern part of the Ungava Orogen, north of the Sugluk Shear Zone.

Units of the Narsajuaq Lithotectonic Domain overthrust units of the Kovik Lithotectonic Domain, to the south. These two domains are separated by the Sugluk Shear Zone. St-Onge et al. (1992) and Dunphy and Ludden (1998) suggest a correlation between the older and younger plutonic suites of the Narsajuaq Complex and the intrusions of the Cape Smith Supersuite of the Northern Domain. Intrusion ages are grouped in two distinct periods contemporary to Narsajuaq suites. Geochemical characteristics and similarity in age of Parent Group volcanic rockss and Narsajuaq Complex plutonic rocks suggest that the Parent Group could represent a volcanic equivalent of the Narsajuaq magmatic arc, but with less crustal contamination (Picard et al., 1990; St-Onge et al., 1992; Dunphy et al., 1995; Dunphy and Ludden, 1998).